The predecessor of the shipping alliance was the European Liner Trade Union . On April 6, 1974, the “Convention on the Code of Conduct of Liner Conferences” was adopted at the United Nations Conference held in Geneva, and came into effect on October 6, 1983. However, this code convention has not been able to be effectively implemented in the actual implementation. Liner conferences have abused their privileges other than immunity and anti-monopoly, and violated the goals and principles of the 1974 United Nations Convention on the Code of Conduct of Liner Conferences, triggering worldwide resistance. After years of deliberation, the European Union decided to revoke the anti-monopoly immunity of liner conferences from October 18, 2008, and concluded the debate on whether to cancel the anti-monopoly immunity of liner conferences for many years: the monopoly development of container shipping This led to the disintegration of the liner union, and the liner union withdrew from the stage of history immediately, and the world shipping also moved towards a new trend and pattern.

Since the 1990s, the contradiction between supply and demand in the liner shipping industry has become increasingly acute, and the shipping market has entered an unprecedented difficult period. Although independent individual shipping companies strive to increase investment and cooperation in route configuration, freight policy, service level, etc., practice shows that independent The operating shipping companies have been left alone and cannot operate on the track of “low transportation costs and high service quality”. Therefore, the world’s major liner companies have embarked on the road of large-scale joint ventures. In order to increase the number of ports of call and expand the scope of logistics services, shipping companies often conduct joint agreement operations through cabin (container) space sharing agreements and terminal sharing.

Therefore, the shipping alliance generally refers to: liner companies complement each other in the field of transportation services and ports of call, coordinate shipping schedules, and rent space each other, and in the field of transportation auxiliary services, information sharing, or joint construction of shared terminals and storage yards, or shared All kinds of alliances formed by the inland logistics system based on the economies of scale of global or regional routes. The combination of liner companies realized global joint operations (because the shipping capacity of shipping companies in that period was generally limited compared to now, and could not cover the needs of global route operations), improved service quality, and achieved huge benefits at the same time. Due to the benefits of economies of scale, shipping alliances have become the main theme of the development of the shipping market since 1995.

1. After the popularization and improvement of large-scale container shipping industry in recent years, shipping companies cooperate with each other in various aspects of the alliance to create economies of scale and improve marginal cost utilization.

2. Through alliances and shipping companies, the number of ships on the route can be reduced, and the capital risk caused by the purchase of ships can be reduced. On the other hand, signing agreements with other shipping companies to share docks and storage yards can improve the utilization rate of docks and storage yards, effectively recover part of the cost in advance, and also avoid losses caused by idle resources during the off-season of shipping.

3. Increase the sailing frequency of the route, reduce the input of transport capacity and improve the loading and utilization rate of ships. For example: After the alliance, on a certain route, the shipping company only needs to provide half of the shipping capacity of the alliance, which can at least double the shipping frequency of both parties, which greatly improves the competitiveness of the carrier. At the same time, for the majority of cargo owners, they can have more shipping schedules to meet their more diverse needs. (Like the European line, at least 6 ships are required for a biweekly route. The weekly liner service between ports on different routes needs to invest in several fixed ships. Regardless of their utilization rate, they will sail. If it is a member of the Ocean Alliance, a shipping company can open 2 more routes as long as it ships 2 ships)

4. Expand the service scope of the alliance shipping company. Through the third point, we can conclude that after the alliance, the shipping company can expand a larger service scope and develop new markets. Alliance members can gain advantages in operating costs on new routes by making use of each other’s long-established market and route networks, relatively cheap labor and various resources.

5. Redistribute excess resources and capacity. Shipping lines are often faced with overcapacity due to demand for a number of reasons. For example, seasonal factors, carrier’s strategic shift, or when the market is in a downturn, the carrier hopes to reduce the scale of transport capacity and reduce risks. Shipping alliances allow members to exchange shipping capacity on different target routes and reallocate excess resources. 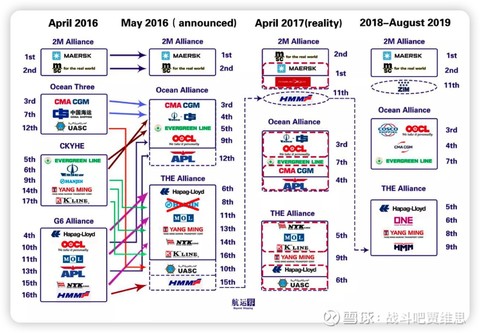 While there are differences between leagues, most leagues operate in much the same way. The main areas of communication and information sharing cover the same areas such as stowage planning, vessel allocation and scheduling, and problem solving. They also openly discuss how to regulate fuel types, environmental concerns, operational efficiencies, and engine failures. Other elements of each shipping alliance include capacity planning, each carrier’s contribution, and specific compensation. And the choice of port is usually subject to negotiation and may deviate from the choice of a particular member. This is especially contentious for carriers with substantial ownership in container terminals, as ship-sharing partners often have stakes in different container terminals. While alliances have established joint operations centers to enable closer coordination, best practice sharing is not the norm in such networks and occurs primarily on a bilateral basis.

Maersk Line and MSC have announced a 10-year vessel-sharing agreement starting in 2014. The agreement includes 185 vessels with a capacity of 2.1 million TEUs. Maersk contributed 1.10 vessels/1.2 million TEU capacity. MSC added 75 ships/900,000 TEU to the alliance. It is now the largest shipping industry since Hamburg Süd (part of Maersk) entered. 2M serves 44 scheduled routes between Europe, Asia and the United States. In the first year alone, Maersk forecast savings of $350 million. HMM partnered with the 2M Alliance in 2017 for a period of three years. Swap slots and share or trade surplus capacity in this way.

Launched in 2017 with an initial period of 5 years, COSCO SHIPPING, OOCL, CMA CGM and Evergreen have confirmed extensions to 10 years until 2027. The Ocean Alliance includes 330 container ships with an estimated carrying capacity of 3.8 million TEUs. It offers a total of 38 different services, including 19 trans-Pacific services, 11 services between Asia and Europe (+Mediterranean) and 4 services between Asia and the Middle East.

Launched in 2017 by Hapag-Lloyd, ONE and Yang Ming, THE Alliance combined 3.5 million TEUs. This represents approximately 25% of global container capacity. On top of that, THE Alliance also revealed that it will be deploying a fleet of 249 ships. It will connect 76 ports in Asia, Northern Europe, the Mediterranean, North America, Canada, Mexico, Central America, the Indian subcontinent and the Middle East. In 2019, the alliance said, they “optimized port-pair connectivity to meet customer demand for greater reliability and stability in quality of service.” HMM from South Korea will become part of THE Alliance, adding 519,000 TEU to its total capacity by April 2020, increasing its global market share from 25% to 30%.

As of November 2022, Alphard’s latest data on the three major leagues: 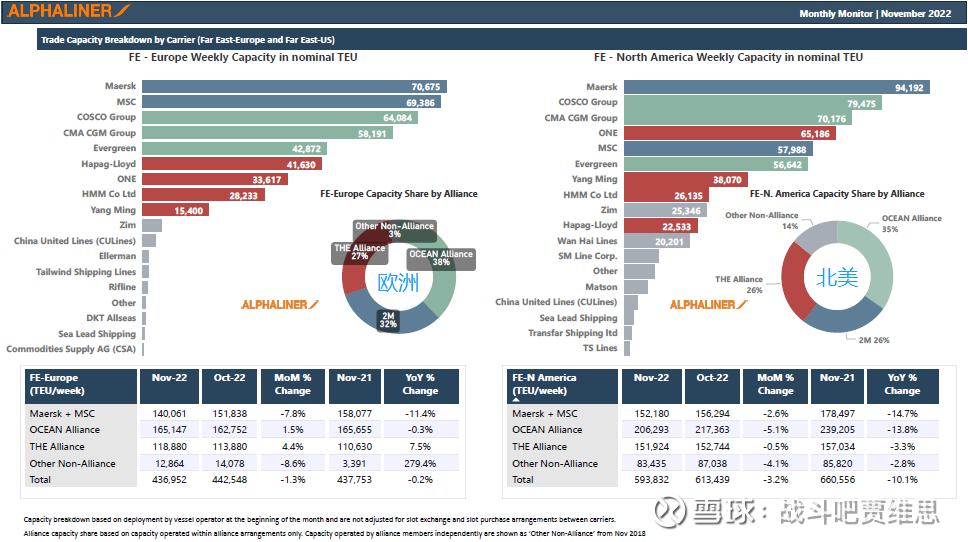 There are 55 discussions on this topic in Xueqiu, click to view.
Snowball is an investor social network where smart investors are all here.
Click to download Xueqiu mobile client http://xueqiu.com/xz ]]>