#All people appreciate Penghua wine, the value returns to the whole “ball” toast#

Since the beginning of this year, the consumer sector has experienced a period of decline. The epidemic has slowed down, and the promotion of consumption policies has been continuously introduced. At the same time, after the sharp drop, the valuation has decreased, and the liquor sector has gradually recovered recently.

First, the current favorable factors of the wine industry:

1. The epidemic has slowed down, and policies to promote consumption have been continuously introduced.

In June, Shanghai and Beijing gradually entered the stage of resumption of production and work. The impact of the epidemic has slowed down compared to April and May.

In order to boost consumer demand, various measures have been introduced from the central to local governments to boost consumer demand. The General Office of the State Council issued the “Opinions on Further Unleashing Consumption Potential and Promoting Sustainable Recovery of Consumption”. On May 26, Shenzhen issued several measures to promote the continuous recovery of consumption. On May 29, Shanghai issued the Shanghai Municipal People’s Government’s “Action Plan for Accelerating Economic Recovery and Revitalization in Shanghai”, supporting large shopping malls, e-commerce platforms and other enterprises to carry out home appliance trade-in, green smart home appliances and electronic consumption through discounts and subsidies. product promotions, etc. With the further progress of resumption of work and production, and the influence of policies to promote consumption at all levels, consumption will gradually resume growth in the later period.

2. The price upgrade of the liquor industry has become the core factor driving the growth of the industry. At present, the price of liquor, especially high-end liquor, is still strong, some of which are still rising, and the profitability of the industry is also improving. From 2015 to 2021, the compound growth rate of operating income of the liquor industry is about 11.4%, while the compound growth rate of annual output is only 1.5%. Affected by rising prices, industry profitability has also continued to improve, with gross and net profit margins rising since 2016.

3. The performance of high-end liquor companies continued to maintain steady growth. High-end liquor has both high quality and scarcity, and has strong toughness.

For example, in the first quarter of 2022, Kweichow Moutai achieved an increase of 18.43% in operating income and a 23.58% increase in net profit attributable to the parent company.

5. On May 19th, Moutai officially launched the official digital marketing APP “i Moutai”. Recently, Moutai and Mengniu jointly launched three flavors of “Moutai Ice Cream”. Leading companies continue to create new performance growth points, and the future growth potential continues to increase.
6. The beer industry is about to usher in the peak season, and the short-term growth potential is relatively large. With the advent of summer, the scale of the demand side of the beer industry will increase rapidly.

2. Introduction to the investment value of the CSI Wine Index:

1. Overview and compilation rules of the CSI Wine Index:

CSI Liquor Index 399987 selects securities of listed companies involved in liquor, beer, wine brewing and other businesses from the Shanghai and Shenzhen markets as index samples to reflect the overall performance of the securities of alcohol-related listed companies. The weight of a single sample does not exceed 15%, and the total weight of the top five samples does not exceed 60%.

CSI Alcohol Index currently has 31 constituent stocks, of which 30 belong to the alcohol industry in the CITIC secondary industry classification, and 1 belongs to other chain industries. From the perspective of the constituent stocks corresponding to the three-tier industries of CITIC, the liquor and beer industries constitute 95.23% of the weight of the China Securities Liquor Index. 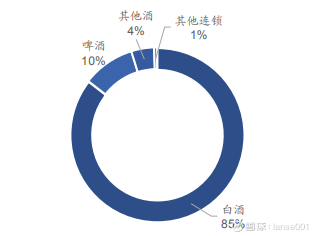 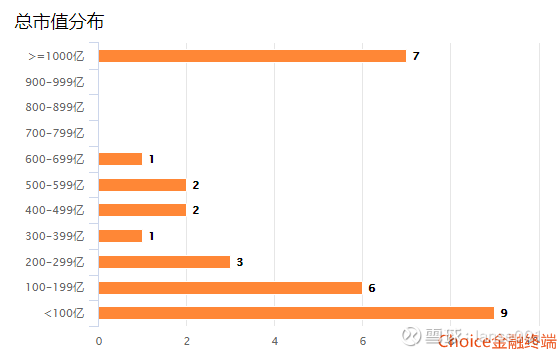 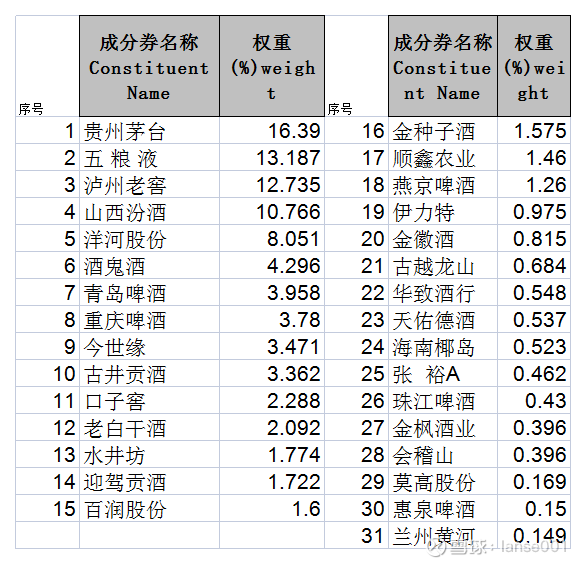 5. The constituent stocks of the CSI Wine Index 399987 have the characteristics of high gross profit margin and high roe. For example, the top five stocks with heavy holdings have gross profit margins between 74.91% and 91.54%, and roe between 18.55% and 31.15%. Profitable strong ability 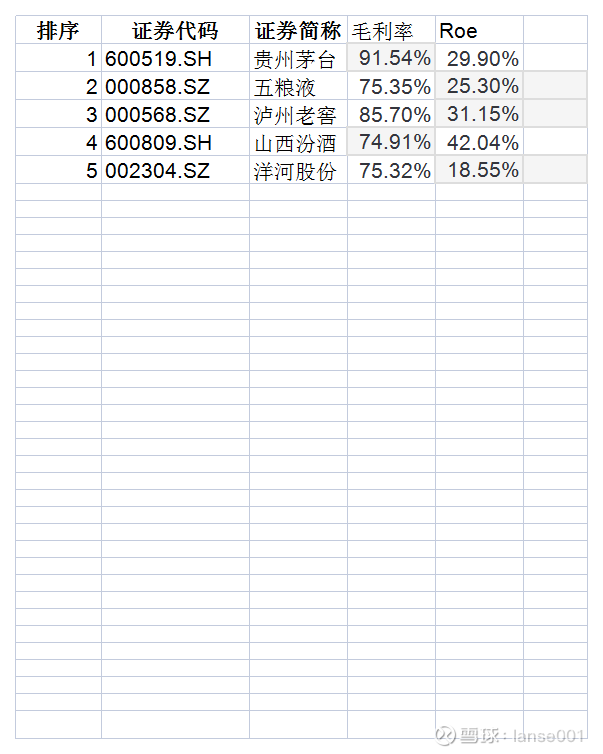 6. The historical performance of the CSI Wine Index of 399,987 was outstanding.

7. The current valuation of the CSI Wine Index is at a low level since its listing. 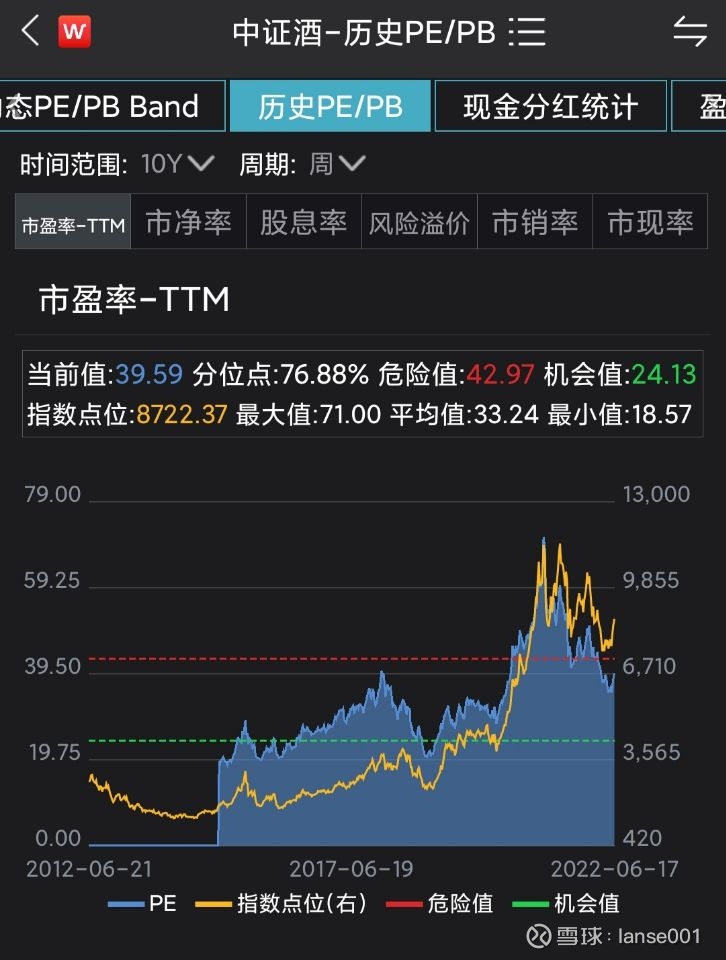 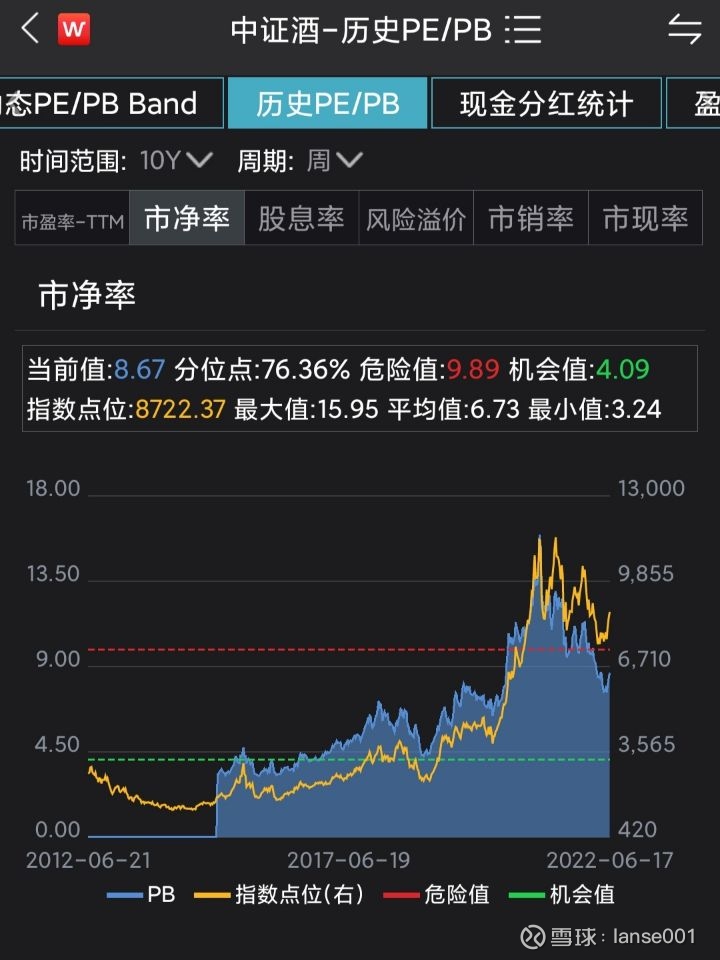 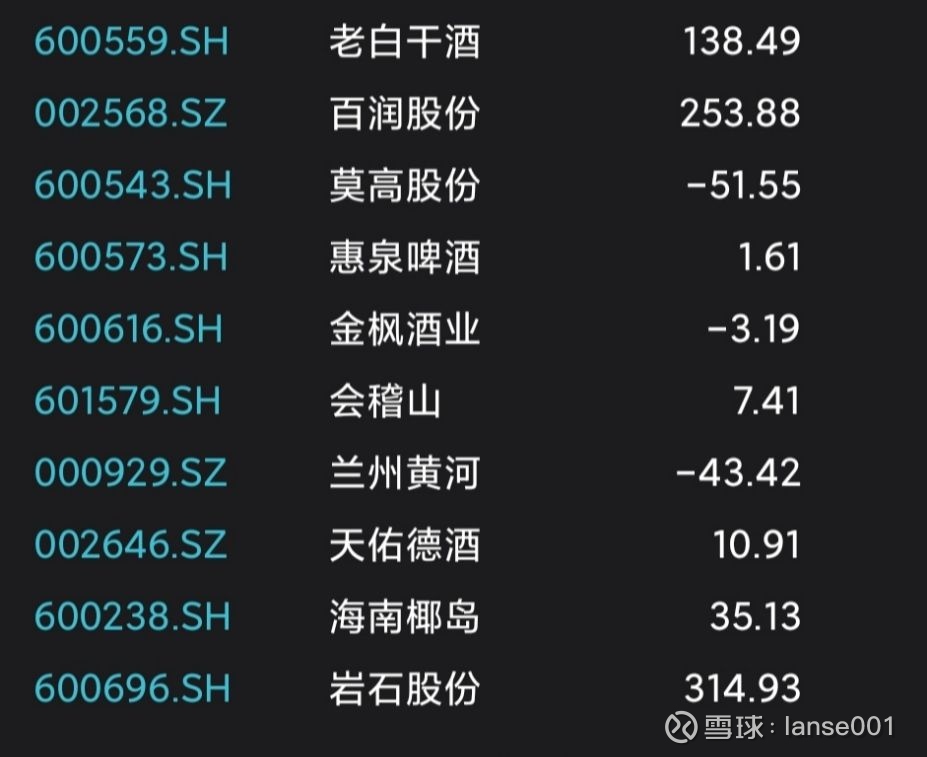 The style is close to food and beverage and liquor, which is quite different from the main broad-based index. The annualized return is high, the drawdown is also large, and the Sharpe ratio data is good, indicating a good risk-return ratio.

Penghua CSI Wine ETF (512690): Currently the only ETF in the market that tracks the CSI Wine Index. It was established on April 4, 2019. The fund’s performance comparison benchmark is the CSI Wine Index yield. The current fund manager is Zhang Yuxiang .

(1) Scarcity. It is the only ETF in the market that tracks the China Securities Wine Index.

(2) The tracked CSI Wine Index has excellent historical performance. As of June 17, it has increased by 224.3% in the past five years, ranking 63 among all 11,166 funds, outperforming most funds. (Data source: Tiantian Fund)

(3) The liquidity is better than that of the main competitor 161725 China Merchants China Securities Liquor Index Fund, 161725 is used as LOF, and the daily turnover is about 59 million, which is significantly lower than the 700 million yuan of 512690.

(5) As an ETF, 512690 can be used for margin financing and securities lending, and the transaction efficiency is higher. ETF can be traded in a disguised form of t+0. (The ETF shares purchased on the same day can be sold on the same day.)

(7) The wine ETF can allocate companies in the wine industry in a basket, which can diversify risks and avoid the black swan of individual stocks.

Due to the complete replication method, the performance is close. Among them, 512690, as an ETF, has a higher position, and it rises more when it rises, and also falls more when it falls. 512690 Liquor ETF, China Merchants Liquor Index Fund 161725, Penghua Liquor 160632 have a correlation of 1, basically rising and falling synchronously, followed by food and beverage ETF, with a correlation of 0.97, which is also highly correlated, and has a low correlation with the CSI 300 ETF. is 0.8. 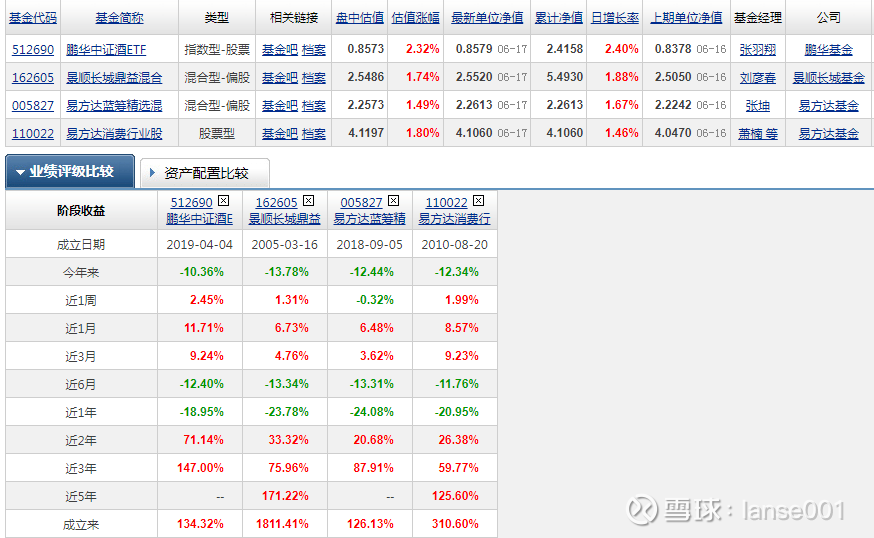 In the past 1, 2, 3 years, Zhang Kun, Liu Yanchun, and Xiao Nan have not outperformed the wine ETF. It can be seen that the performance of the wine ETF in consumer funds is very good. consumer fund.

6. Penghua Fund, which manages the CSI Wine ETF, is a leading fund company in the market, with an index fund of 60.286 billion yuan. There are several index funds under Penghua Fund Fund. Brief introduction of the fund manager: Mr. Zhang Yuxiang: Master of Engineering, cumulative tenure: 6 years and 276 days, the current total size of fund assets is 19.34 billion yuan.

7. The China Securities Wine ETF is suitable for investors who are optimistic about the wine industry and want to share the growth of the wine industry. At the same time, it lowers the threshold for investing in the wine industry. You don’t need to buy Moutai for 195,100 yuan. You can buy one hand wine ETF with only 86 yuan. ETF has a low threshold. , which can avoid the black swan risk of individual stocks, and have many advantages such as low transaction costs.

Summary: China Securities Wine Index and Penghua China Securities Wine ETF 512690 are scarce ETF varieties in the market, including leading companies in the A-share wine industry, with high consumption attributes and excellent long-term performance. Relatively low, with low threshold, can avoid the risk of individual stocks black swan, low transaction costs and many other advantages, can improve convenience store investment tools for investors to invest in the wine industry.

Risk warning: China Securities Wine Index and Penghua China Securities Wine ETF 512690, as industry-themed ETFs, have high industry concentration risks, large fluctuations, and a risk level of r5. They are high-risk products and are suitable for investors with high risk appetite. China’s economic growth is lower than expected, the growth rate of wine companies may decrease, and fluctuations in the epidemic may affect the performance of the index.

This article is a personal opinion, not as investment advice, enter the market accordingly, at your own risk.