Tencent, which used to be on the same page as the “Second Creation”, now seems to be gradually changing its attitude.

However, with the cooperation between Douyin and iQiyi, they announced that they will explore the secondary creation and promotion of long video content. LeTV also married Kuaishou and opened up exclusive self-made content for second-generation licensing cooperation. Tencent’s position on Erchuang Video may not be as closed as it was at first.

Spiral Lab noticed that Tencent has recently begun to gradually test the “video commentary” function in its smart video creation tool Zhiying. Creators can not only quickly create film and television commentary videos based on this function, but also can use a large number of Tencent exclusive videos for free. Film and television copyright.

Release the copyright of film and television

According to public information, Tencent wholly acquired the AI ​​online cloud video platform Zhiying in February last year, and began to open it to creators in a low-key manner this year. Because of its unique “digital human broadcast” function, it can generate virtual character videos online. It has won the favor of many self-media creators.

Compared with video editing software such as Cut Ying and Bi Cut, a major advantage of Zhiying is that it has access to a large number of exclusive copyrights of Tencent Video, and creators can obtain the right to use these copyrighted materials for one year after applying for authorization.

Among the episode materials that are open for use, not only popular episodes such as “Meng Hualu”, “Knives in the Snow”, “Celebrating the Year of Yu”, etc., but even the currently airing “Ode to Joy 3” can be synchronized use.

In addition to providing convenience for creators in terms of materials, Zhiying has also recently launched a beta version of the “video commentary” function, which focuses on “free use of genuine movies” and “quick production of commentary videos”. Creators can enter commentary scripts under this function, and quickly create video commentary content through Zhiying’s material import and AI dubbing.

Judging from the direction of the product, Zhiying seems to have a high adaptation attribute for the second-generation content of video commentary, which is also different from other video editing software which mainly focus on rich and diverse special effects and templates.

In addition, because Zhiying is a cloud editing platform, there is no client-side product, and creators can log in to the corresponding website to edit online, which greatly reduces the mobile use threshold for creators.

Tencent quietly opened up a large number of video materials to its own editing products. Does it mean that Tencent’s platform ecology needs to further loosen the second-generation content? In fact, it is not always the case.

Because in the agreement that Tencent video copyright materials are open to Zhiying users, Tencent has made many restrictions, such as prohibiting creators from creating quick-view content, which also mentions that it is not allowed to create “a few minutes to watch XX” type. video. 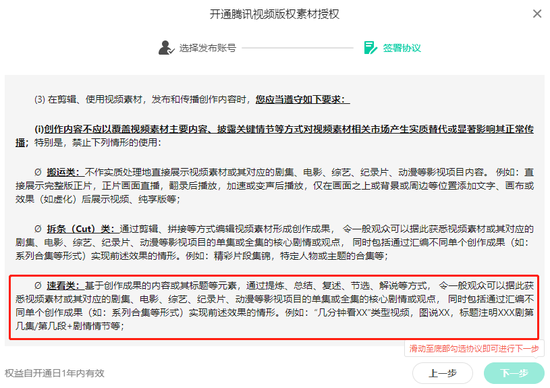 In addition, the content created by creators based on Zhiying and Tencent video materials can only be distributed on the Penguin account in the authorized media account. The main distribution channels are Tencent’s own platforms such as Tencent News, QQ browser, and QQ Small World.

However, compared with the past resistance to the content of the second creation, Tencent’s position has changed a lot.

Tencent’s attitude towards the content of the second creation has always been in a rather twisted attitude in the past. On the one hand, it is unwilling to give up its copyright leadership in the field of long video, and on the other hand, it needs to face the real needs of users for such content.

Especially after Sun Zhonghuai, vice president of Tencent, publicly denounced quick-view and slicing videos in June last year, the outside world once believed that Tencent would continue to boycott second-generation content, but the follow-up results show that Tencent is gradually making changes.

First, in November last year, Tencent’s creative service platform began to apply for access to the Douyin open platform. Tencent said that there are a large number of exclusive copyrighted short videos of popular film and television dramas on the entire network that can be sent to Douyin to supplement the content ecology of Douyin. 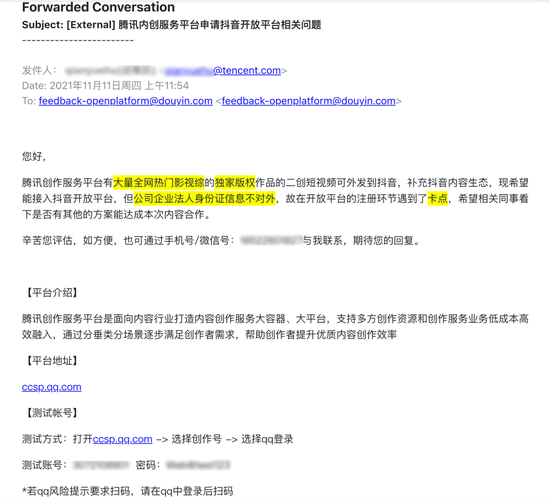 In January of this year, the official account of Tencent TV drama station B held the event “New Year’s dramas are in the goose’s house, I love to engage in memories and kill the second creation contest”, specifying the scope of TV drama materials, inviting users of station B to make secondary creations, and providing rich resources. At the same time as the prize money, it also promises to carry out official copyright protection for the manuscripts of the event.

In addition, Tencent Video’s official public account “Chuanghaodian Xiaoer” also launched a “good film solicitation order” in February this year, announcing that it will spend 2 million in cash throughout the year to encourage the creation of high-quality short videos of movies, TV series and documentaries, among which Creation forms such as film criticism, commentary, editing (second creation) are among the encouraged contents.

However, these small-scale activity incentives do not mean that Tencent has truly reconciled with Erchuang. At the official level, Tencent has not given a clearer attitude to truly recognize the “legitimate” status of Erchuang’s content.

Compared with Tencent, other long-term video platforms with exclusive copyrights have already embraced Erchuang faster. iQiyi and Sohu Video have successively cooperated with Douyin to open the authorization of Erchuang. And LeTV, which owns the copyrights of classic film and television dramas such as “The Legend of Zhen Huan” and “White Deer Plain”, has also joined hands with Kuaishou to create two.

It was once rumored that Tencent, the largest shareholder of Kuaishou, might also open copyright licenses to partners, but Tencent’s response was extremely cold. In July this year, Tencent Video officially released a message saying: We have noticed false reports about Tencent Video and a company reaching a strategic cooperation for long-term video creation, and hereby declare that this news is a rumor. It can be considered to completely cut off the thoughts of the fast-handed veterans.

However, from the point of view of mutual benefit, it has been proved that the short video platform can feed back the traffic growth of the original drama series through the second creative content such as film and television commentary, which has been proved to be feasible. During the Spring Festival this year, LeTV Video once provided Kuaishou users with a large number of popular content such as classic movies and TV series for free, and the daily broadcast volume of related cooperative dramas increased by a maximum of 3-5 times.

Want to pave the way for a video number?

From the small-scale launch of the second creative editing event to the tailor-made video commentary creation tools for creators, Tencent seems to be gradually opening up its own copyright gap, but the question is why there is only a babbling stream, but no flooding.

There may be another reasonable explanation. Tencent is waiting for a suitable time to pour its most valuable resources into the business with the most development potential.

In today’s Tencent’s territory, which business is most likely to become a new growth engine in the future, it is undoubtedly the video account.

According to the report of Wian Niu Shi, the WeChat video account has tested the film and television variety show area in March this year, and the main recommended accounts are “XX Talks Movies”, “XX Clips” and other accounts, and the content is typical film and television commentary.

And some popular content works are enough to prove that the second-generation works of film and television commentary have a broad audience base. For example, a film and television commentary video of “Life and Death Lop Nor” released by “Slots Talking Movies” in early August has won a lot of points. Three 10w+ scores of likes, retweets and watching. Based on Tencent’s own massive video material library, it is open to video account creators for exclusive creation and distribution, so at least in terms of platform content, WeChat is different from other short video platforms.

From this point of view, Tencent firmly holds the copyright of Erchuang, and it may not be as simple as fighting for a breath with Douyin Kuaishou.

This article is reproduced from: http://finance.sina.com.cn/tech/csj/2022-08-26/doc-imizirav9829907.shtml
This site is for inclusion only, and the copyright belongs to the original author.