On August 17, Tencent released its second-quarter 2022 performance report. The single-quarter revenue of the “financial technology and enterprise services” business was 42.2 billion yuan, accounting for 31.5% of total revenue, and exceeding 30% for five consecutive quarters.

This quarter, the health of corporate service revenue has improved significantly, and the “healthy and sustainable strategy” has achieved initial results. The financial report shows that the gross profit level of corporate services continued to improve due to optimizing the revenue structure, reducing loss-making projects and reducing costs.

Strategically, Tencent continues to focus on self-developed products and services, and has gained authoritative recognition in terms of product competitiveness and technological leadership. The financial report pointed out that Tencent Cloud’s distributed database TDSQL revenue increased by more than 30% year-on-year, accounting for more than 5% of enterprise service revenue. 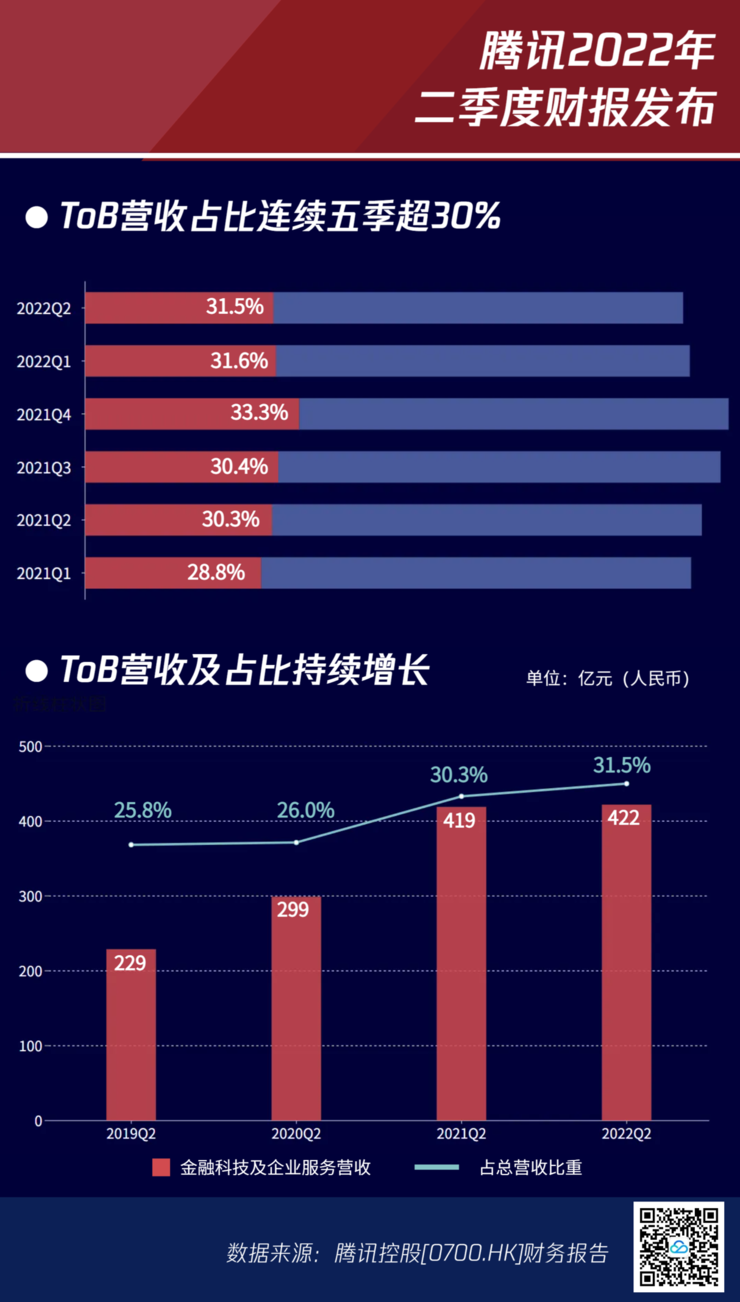 Lay a foundation and a strong foundation, and lead the industry in the ability of self-developed products

Under the healthy and sustainable business model that emphasizes the strategic position of self-developed products, encourages product integration, and continuously enriches the partner ecosystem, Tencent continues to increase resource investment in core self-developed areas. The financial report shows that in the first half of the year, Tencent’s R&D investment reached 30.4 billion yuan, a year-on-year increase of 26%. Self-developed products such as databases, audio and video, and Tencent conferences performed well.

The financial report pointed out that Tencent Cloud’s distributed database TDSQL revenue increased by more than 30% year-on-year. At present, TDSQL has helped more than 20 financial institutions to complete the localization of core systems, serving nearly half of the top 20 domestic banks. The new version of Tencent Cloud’s native database TDSQL-C has nearly 200% performance improvement over traditional cloud databases.

Tencent has accumulated more than 10 years of self-developed technologies in the field of operating systems, providing a full-stack layout for cloud, edge, and IoT. In June this year, OpenCloudOS, an open source operating system community initiated by Tencent, officially released the first source community project and the first full software package version, becoming the first server operating system in my country with full-link localization capability.

Tencent Cloud’s big data platform TBDS passed the product capability evaluation of the China Academy of Information and Communications Technology with a super-scale of 10,000 nodes in a single cluster, becoming the only manufacturer in this batch that passed the large-scale capability certification. According to the “China Data Governance Market Share” released by the International Data Corporation IDC, Tencent Cloud’s WeData market share ranks among the top three in China.

In addition, Gartner’s latest 2022 “Magic Quadrant for Cloud AI Developer Services” shows that Tencent’s computer vision product service capabilities have entered the world’s top 2 for the first time, creating the highest ranking of domestic AI companies in this field, once again confirming that Tencent Cloud is in the cloud. International leadership in AI developer services.

In terms of SaaS, Tencent Conference launched the application market, and the first batch of more than 20 applications such as Evernote, Tencent e-Sign, and Tencent Questionnaire were launched, covering scenarios such as CRM, contract signing, interview, and efficiency, which greatly enriched the conference experience. At the same time, this financial report performance report will be supported by Tencent Conference Webinar (Webinar) for the first time. In addition to the financial report meeting scenario, Tencent Conference Webinars also provide online meeting solutions for various scenarios such as education and training, financial roadshows, and marketing summits.

Continue to deepen the industry and help the real economy

The growth of the To B business into the company’s revenue pillar has strengthened Tencent’s confidence in the long-term layout of the industrial Internet. This quarter, Tencent Cloud continued to develop in various industries and launched a series of benchmark cases and solutions. Tencent Cloud and Smart Industry Group (CSIG) announced an organizational upgrade in July and established a government-enterprise business line to further accelerate the implementation and application of digital technology in the real economy.

In the financial field, Tencent Cloud assisted Longyan Rural Credit System to open a “remote bank”. The time limit for signing a multi-person guaranteed loan has been increased from 3-5 days to 15-30 minutes, and the contract can be completed in the fastest 15 minutes. The per capita work efficiency has increased by more than 10 times. Based on financial technology capabilities such as cloud computing, big data risk control, and blockchain, Tencent Cloud helps Zhangjiagang Free Trade Zone build a public service platform for supply chains, and opens up the “last mile” of inclusive finance for more than 10,000 traders in the region to solve financing problems problem.

In the field of energy, Tencent Cloud released two energy industry products for the first time: “Energy Connector (Tencent EnerLink)” and “Energy Digital Twin (Tencent EnerTwin)”. Relying on the synergy advantages of Tencent’s connection, the two products leverage the technological capabilities of big data, artificial intelligence, and digital twins, which will effectively promote the quality, efficiency, energy conservation and carbon reduction of enterprises, and help the industry to accelerate its move towards digitization and carbon neutrality.

In the field of intelligent manufacturing, it will continue to provide digital bases for leading enterprises in the industry such as Sany Heavy Industry, Fulian Industrial, and Midea, and accelerate the overall transformation and upgrading of industrial clusters. Tencent’s WeMake industrial Internet platform has been selected as a national-level dual-cross platform for three consecutive years. It has served 420,000 manufacturing companies, covering 26 industries, opening more than 4,900 industrial apps, and connecting 2.97 million devices.

In the field of smart buildings, Tencent Cloud joins hands with Shenzhen Mawan Port to create a digital twin city of virtual and real symbiosis, and uses virtual to drive reality planning and development to create an ideal urban space; in terms of future communities, it provides customers such as Country Garden Services and Poly Property Services based on corporate WeChat and Tencent. Lianlian’s community service platform solves the “last mile” problem of urban governance.

In the field of government affairs, Tencent Cloud has become one of the first service providers to pass the assessment of the “Government Collaboration Platform Solution Capability” by the China Academy of Information and Communications Technology. At present, Tencent Cloud has penetrated into ten major scenarios of government collaboration, such as grassroots governance, mobile office, fingertip assistance, and smart epidemic prevention, and has created “Seven People General”, “Two Sessions on the Cloud”, Yuezhengyi, Guizhengtong, and Shanghai “One” A number of benchmarking projects such as “Network Unified Management” have accelerated the construction of digital government and the improvement of grassroots governance efficiency.

In the field of agriculture, Tencent and Shennong Group signed a strategic cooperation agreement to comprehensively promote the digital transformation of Shennong Group’s business and organization, and jointly explore the construction of “digital agricultural approval” and “digital vegetable basket”.

In the field of operators, Tencent Cloud realized the systematic replacement of the domestic self-developed mailbox system in the operator industry for the first time, and steadily supported hundreds of thousands of enterprise employees to access and use it; it also successfully implemented the first 5G dual-channel (cellular network & Wi-Fi ) slice gateway, which helps operators to further improve user stickiness by enhancing network reliability and reducing latency.

This article is reproduced from: https://www.leiphone.com/category/industrynews/qHDG1g3xeBJajpyY.html
This site is for inclusion only, and the copyright belongs to the original author.