Tesla released its first-quarter 2022 financial report, which showed a gross profit margin of 32.9%.

Entering 2021, the numbers in Tesla’s financial report have gradually become crazy, especially the gross profit margin, which has an average increase of nearly 2 percentage points per quarter, and even exceeded 30.6% in Q4 last year. By Q1 of this year, Tesla’s auto business gross margin even came to:

32.9%! The gross profit margin is close to 1/3, which means that for every car Tesla sells, it can earn a gross profit of more than 100,000 yuan (calculated based on the domestic Model Y price). How consumers should view the ultra-high gross margin, we leave it to the comment area for discussion. In today’s article, we mainly take a look at how Tesla as a company did last quarter. In addition, following Musk’s big revelations at the Texas factory, Tesla’s more specific development plans, product development, and network expansion in 2022 were also mentioned in today’s earnings conference call. Without further ado, start now.

The 32.9% gross profit margin means that Tesla’s quarterly earnings report is almost “outrageous” in all aspects. As usual, we first summarize a series of main data for your reference: 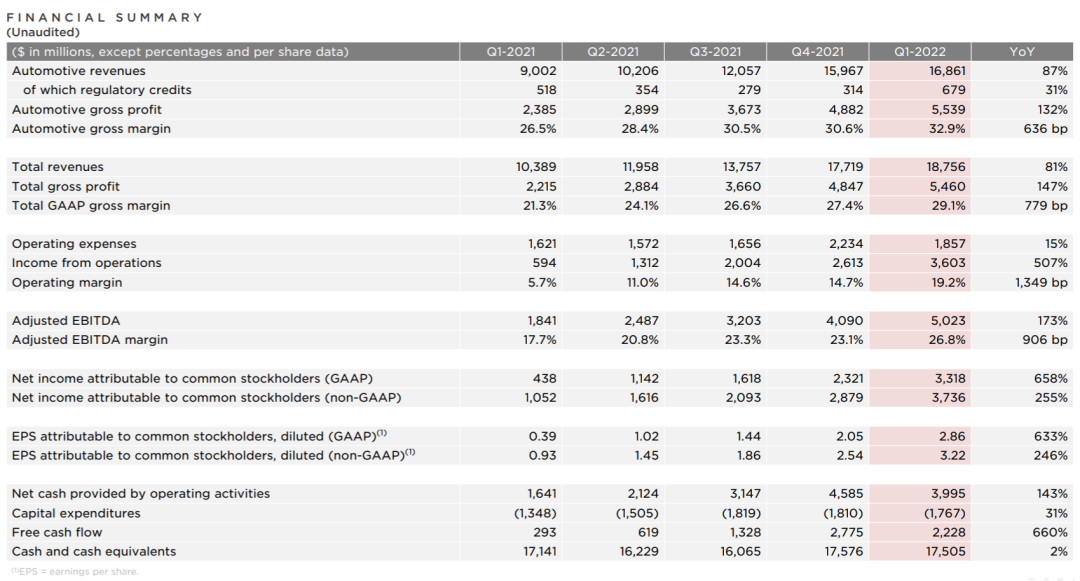 The total gross profit margin was 29.1%, a year-on-year increase of 779 basis points;

Operating profit margin was 19.2%, a year-on-year increase of nearly 2 times;

The global average inventory cycle is 3 days, a year-on-year decrease of 63% (8 days);

The installed capacity of solar energy was 48MW, a year-on-year decrease of 48%;

The installed capacity of the energy storage business was 846MWh, a year-on-year increase of 90%;

In addition to gross profit margins, the most “outrageous” data is the global average inventory cycle. 3 days, which means that the car can be completed within the working day of the same week from the arrival of the car to the delivery.

After a brief analysis of the data, let’s take a look at how Tesla summed up the first quarter:

“Expanding production capacity is at the heart of our decision. In the past two months, the Texas and Berlin factories have started delivering Model Y (with minimal impact on Q1 gross profit). A major effort has been made in

Regarding the balance between cost and price, Tesla described it like this:

“Supply chain challenges still exist, and our team has been fighting against them for more than a year. In addition to chip shortages, the outbreak of Covid-19 has also affected supply chains and factory operations. In addition, the prices of some raw materials have risen several times in recent months. “Despite our continued focus on reducing manufacturing costs, inflation still has an impact on our cost structure, prompting us to adjust product prices.”

The newly opened Texas factory has become the focus of the world because it is the first factory for the 4680 battery + integrated chassis. However, according to the official description, the progress of the 4680 in the Texas factory still needs to wait for a while of climbing:

In addition, “the diversification of battery chemistry” is a point that Tesla emphasized in this financial report. Nearly half of the Tesla models sold globally in the first quarter used lithium iron phosphate batteries – lithium iron phosphate for entry-level models. This is actually a strategy that Musk has mentioned on Battery Day in 2020.

The man is here again.

“Get rid of the baggage,” was his opening remark. As of this quarter, Tesla’s long-term debt, excluding auto and energy product financing, was less than $100 million. “allbutgone is over.”

At the opening ceremony of the Texas factory, Musk said that next year will be the year of Tesla’s new product explosion. So today he broke the news, the production date is at least 2023, and some are even 2030.

For example, he once said that the annual sales of 20 million vehicles will be achieved by the end of this decade, that is, close to 2030-equivalent to 6 times Toyota’s small target of 2030.

A less distant goal is Robotaxi, which was mentioned at the Model Y conference in 2019. As the first Tesla model without a steering wheel, the goal will be mass production in 2024 and a launch event in 2023.

As for the Cybertruck, Musk said “mass production will definitely happen in 2023.”

The other tentatively scheduled for 2023 is the robot Optimus, which will strive for proofing next year. Musk firmly believes that “Optimus will be more important than FSD, and it will gradually emerge in the next few years.”

Talking about the FSD that has been unable to remove the “beta” suffix for a long time, Musk seems to be less aggressive this time. He said that in the process of large-scale deployment of FSD, the team has seen a lot of “false dawn”. “If you want to fix FSD at this stage, you are tinkering with AI based on the real world.”

Next year is the year of new products, and this year Tesla’s mission is to expand.

Focusing on China, the shutdown of the Shanghai factory will undoubtedly have a negative impact on Tesla’s 2022. CFO Kirkhorn said the Shanghai plant shutdown probably cost Tesla “a month lost” than originally planned .

In addition, Musk pointed out that some parts purchased in China may also affect global production due to the shutdown.

But Musk is still full of confidence in the Shanghai factory. “Although we have missed a few weeks, we can still see record production in Shanghai in the second quarter, and the numbers in the third and fourth quarters will be even better.”

As for the Berlin factory, he believes that there is no need to worry about ramping up capacity, because “we have learned a lot from the Shanghai factory.”

Back in the U.S., Tesla’s problem may not be capacity, but direct sales.

Musk said the U.S. government did not support the idea of ​​direct selling nationwide. So Tesla must fight state anti-direct selling laws on its own.

But fortunately Tesla doesn’t have to worry about demand – at least Musk thinks there is no need to worry, “Tesla can produce about 1.5 million cars this year.”

He said there are already independent teams making sure that the Texas/Berlin factories are climbing smoothly, and they will develop faster. “The 4680 structure battery pack actually simplifies the body shop.” But he added that the real mass production of the 4680 will have to wait until the end of the third quarter of this year .

Drew Baglino, vice president of engineering, said that the real superiority of the 4680 structure battery pack will take a few years to fully demonstrate – Musk’s expression is that the performance of the 4680 has caught up with the strongest traditional batteries at present .

Although the goal is to increase capacity by 50%, Musk believes that this is still not enough to meet demand. Because of this, he doesn’t think it’s unfair to raise prices, “the demand is there.” At the same time, he pointed out that today’s Tesla prices actually include the actual logistics costs at the time of delivery.

Talking about price, Musk added that Tesla’s goal is still to accelerate the popularization of electric vehicles, such as the Model 3, “but it is difficult for us to fight inflation, and suppliers are also under enormous pressure.” But with Robotaxi, Tesla should be able to provide consumers with “the lowest cost-per-mile transportation .”

” The cost of Robotaxi should be lower than taking the bus and subway ,” Musk threw out another flag calmly.

As the scale increases, the supply chain is gradually becoming the focus of Tesla’s consideration, or more and more.

“At different production scales such as 5 million, 10 million, 20 million vehicles, etc., the macro position of the supply chain needs to be studied more carefully,” Musk said. For electric vehicles, lithium mines may be the limiting factor he sees in reaching the above-mentioned capacity scale.

He revealed some news about lithium materials from Tesla and will inform you in the next few months. In addition, Tesla now recycles more than 50 tons of battery materials per week, and “there will only be more in the future.” And Tesla not only recycles old batteries, it also recycles scrap from conventional cars, and even tires.

“Do you like mining (cryptocurrency)? Then lithium mine is the best for you,” Musk teased about the prospect of lithium mine.

If the CEO of a car company said, “We have no new products this year, and there will be many new products next year, but I really want to increase the price this year, I bet you must still buy it”, then the TA may be drowned in saliva.

Musk did just that, and of course faced a lot of skepticism, but Tesla’s sales still stood firm. In other words, each quarterly earnings report will only make Tesla stand firmer.

In a TED interview last week, Musk said, ” I’m the most manufacturing person on the planet. “

Perhaps Tesla, which produces 1.5 million cars a year, has not been able to convince the world. But if Tesla can really achieve an annual output of 20 million vehicles in 2030, then he said that his solar system knows best about manufacturing, and I am afraid no one will object.

Corresponding to this “ultimate flag”, he said that the cost of Robotaxi is lower than taking the bus and subway.

It seems that this is an economic flag, but it is actually a scale flag – even a considerable part of the annual production of 20 million, may be achieved by Robotaxi , if it really becomes “the lowest cost per mile transportation”.

This article is reprinted from: https://news.futunn.com/post/14717293?src=3&report_type=market&report_id=203599&futusource=news_headline_list
This site is for inclusion only, and the copyright belongs to the original author.