In a series of valuation simulations, Ark Fund projected that the electric vehicle business will account for 57% of Tesla’s revenue by 2026, with a profit margin far lower than that of autonomous taxis.

ARK Invest has open-sourced its Tesla model, which it expects to be worth $4,600 per share in 2026. The Ark Fund takes the 75th and 25th percentiles under this model as the expected scenarios for Tesla’s bull market and bear market, respectively. In a bull market, Tesla’s stock price will reach $5,800, and in a bear market, it will be $2,900.

As shown in the table below:

This update to the study is based on the Ark Fund’s new open-source Tesla model, which incorporates 38 independent data inputs to simulate different potential outcomes for Tesla.

Tesla’s future “robo-taxi” business is a key driver, expected to contribute 60% of expected value and more than half of expected EBITDA (earnings before interest, tax, depreciation and amortization) in 2026. In a series of simulations, the Ark Fund projected that the electric vehicle business would account for 57% of Tesla’s revenue by 2026, with profit margins well below that of robo-taxi revenue. In this model, the chart below breaks down revenue, EBITDA, and company market capitalization by business.

In this article, the Ark Fund outlines six themes, along with the risks and limitations associated with its assumptions:

Ark Fund does not provide a single bull market or bear market case, and takes the 75th and 25th percentiles under the model as the expected scenarios for Tesla’s bull and bear markets, respectively. The following table lists examples of each case. 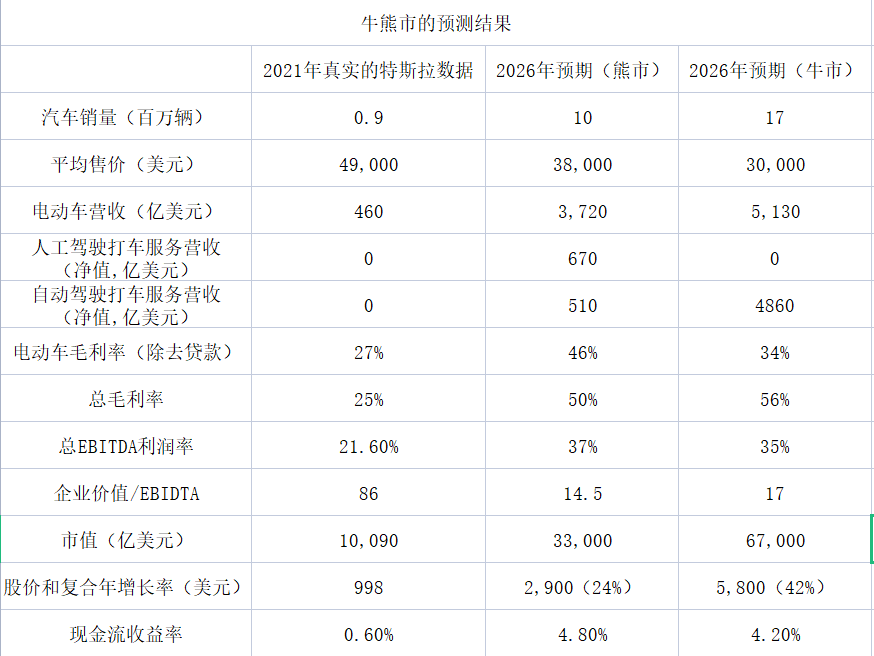 The table below shows the key input ranges for forecasting.

The Ark Fund updated its open-source Tesla model for 2021, outlining its forecast for Tesla to rise to $3,000 per share in 2025. The updated data includes:

The new model includes updated assumptions about the total market for the “robo-taxi” business at each price point, as well as the potential for Tesla to conquer full self-driving technology. Based on an analysis of the perceived value of consumers’ time, the market demand for autonomous taxis is now expected to be at a higher price than when it was originally modeled.

Research shows that in Western countries, the value of each mile traveled is approximately equal to the hourly wage, and the value of each non-work mile traveled is approximately equal to half the hourly wage. Whereas in low-income countries it is $0.50 per mile, we assume another long-tail demand similar to the current price of ride-hailing services. All told, the Ark Fund estimates the total addressable market for autonomous taxis to be around $11-12 trillion, as shown below. 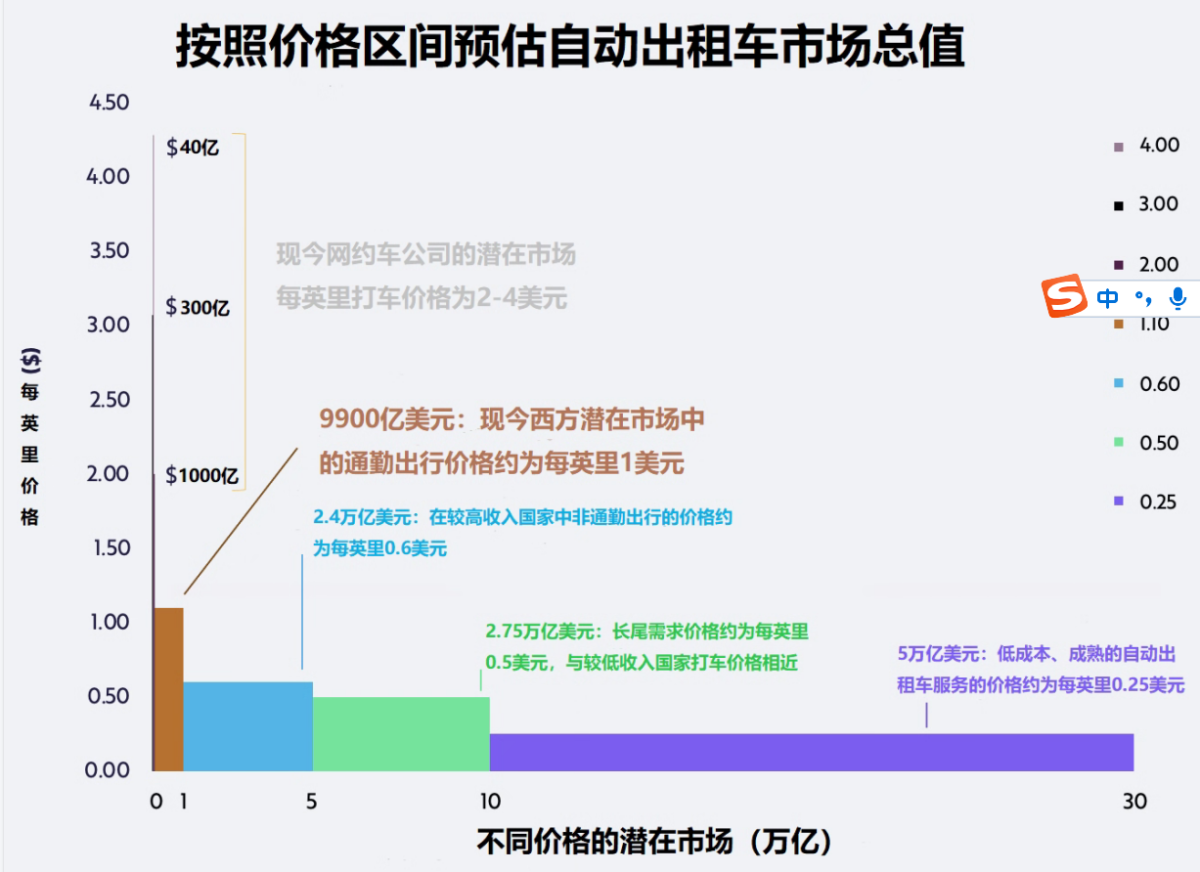 The Ark Fund also updated the process of integrating its robo-taxi business into the model, reflecting its growing confidence that Tesla can fully conquer self-driving technology. The question is when will this technology be conquered? While the previous scenario assumed Tesla would never launch an autonomous ride-hailing service, the updated scenario assumed a launch in 2026, four years later than Musk had expected.

Supporting the current view of the Ark Fund is not only the promotion of the two technologies of “unmanned driving” and “autonomous cruise”, but also the fundamental progress of artificial intelligence. Structurally, the model now allows users to choose the year in which the “robo-taxi” will be launched and its adoption rate. The updated model has also improved Tesla’s capital efficiency. Since 2017, Tesla’s capital expenditures to add one unit of capacity have been reduced from about $84,000 for the Model 3 to about $7,700, as shown below. 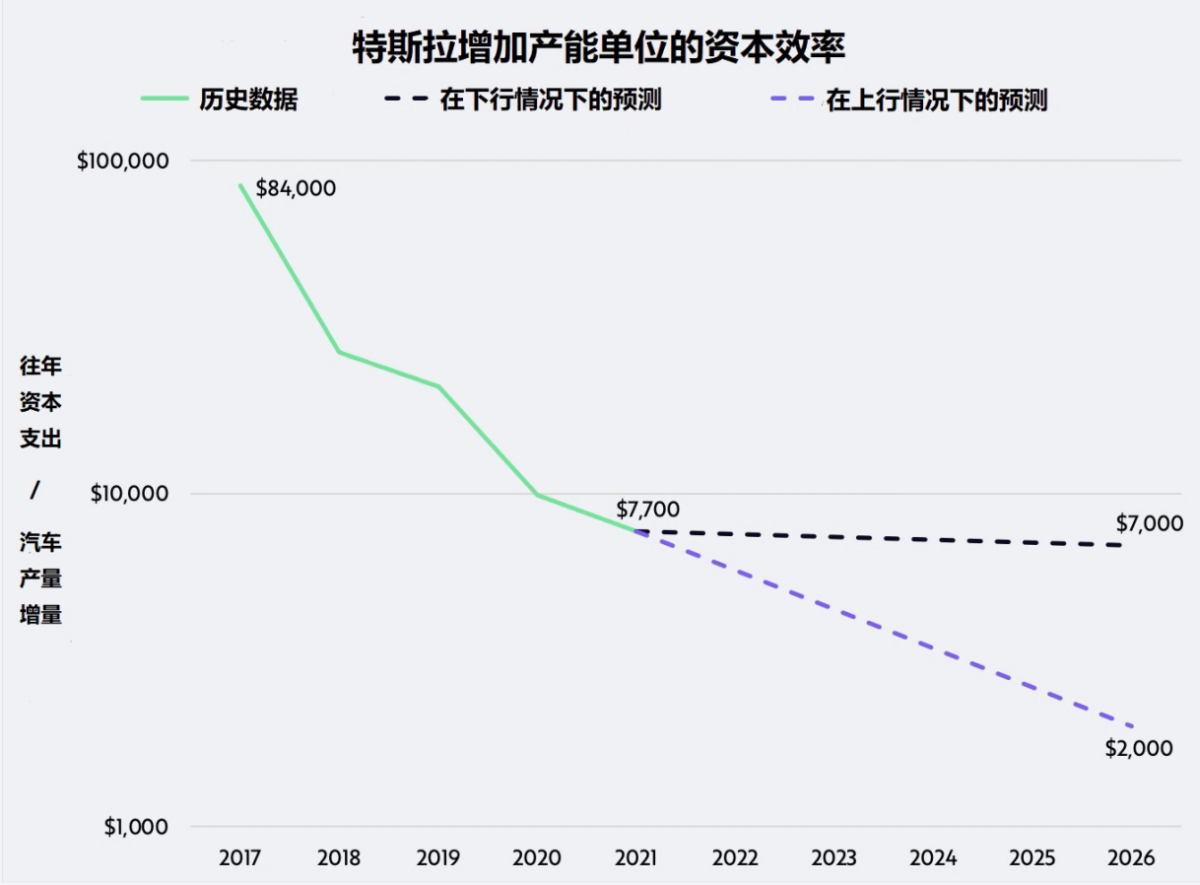 These improvements show that Tesla can continue to improve margins, but more importantly, capital is no longer the bottleneck limiting its growth. Instead, Tesla should be able to grow at its fastest rate with improved management and unlimited supply.

The model illustrates the impact of these restrictions by limiting Tesla’s production growth in any given year using the “maximum annual production growth” data. Tesla’s ability to scale is a key driver of its business results.

The interactive chart below highlights how Tesla’s stock price in 2026 is affected by the year of potential maximum production growth and the launch of autonomous taxis.

These improvements show that Tesla can continue to improve margins, but more importantly, capital is no longer the bottleneck limiting its growth. Instead, Tesla should be able to grow at its fastest rate with improved management and unlimited supply.

The model illustrates the impact of these restrictions by limiting Tesla’s production growth in any given year using the “maximum annual production growth” data. Tesla’s ability to scale is a key driver of its business results.

The interactive chart below highlights how Tesla’s stock price in 2026 is affected by the year of potential maximum production growth and the launch of autonomous taxis. 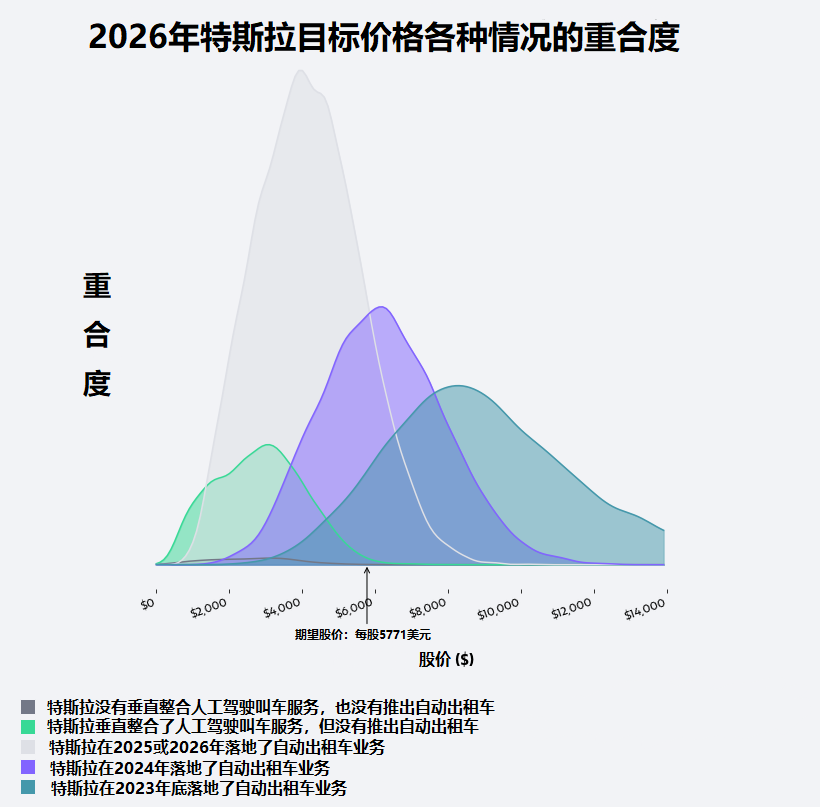 The Ark Fund simulates a significant impact on the timing of Tesla’s launch of its “autonomous ride-hailing” service, as shown in the graph below. The graph above represents the likelihood of all target price distributions in the Monte Carlo analysis, with bear and bull market conditions identified as the 25th and 75th percentile Monte Carlo simulation outputs, respectively. The “expected value” is the average of a total of 1 million simulations. 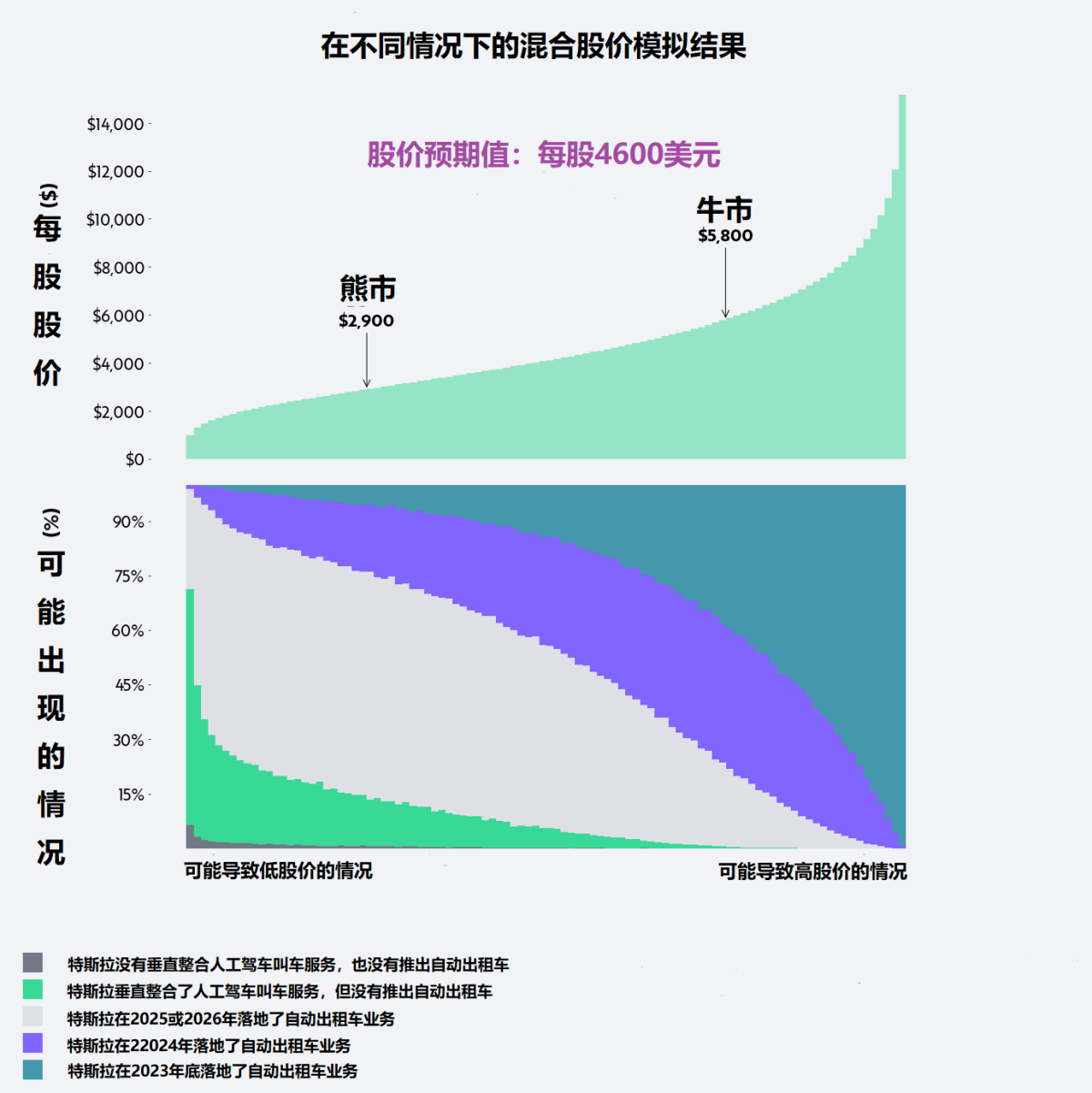 The second graph above illustrates the results of the interaction between the “robo-taxi” service and the traveler’s ride-hailing, corresponding to each stock price expectation represented in the first graph. In multiple scenarios with the lowest share price, Tesla has launched a “vertically integrated, human-driver” ride-hailing service rather than a network of “robo-taxi”, as shown in light green.

In some scenarios, Tesla will not implement any of the services, as shown in dark gray. While Tesla has yet to publicly commit to a human-driven ride-hailing service, Ark has previously detailed the strategic and tactical advantages of doing so.

If Tesla can’t launch a “robo-taxi” service within five years, Tesla can still launch a human-driven ride-hailing service while trying to solve the problem of fully autonomous driving. It’s worth noting that in many scenarios that presuppose high stock prices, Tesla will roll out a network of “robo-taxi” in the next two to three years.

The interactive graph below depicts the combined modeling of the two factors of traveler-hailing and autonomous taxis in more detail. 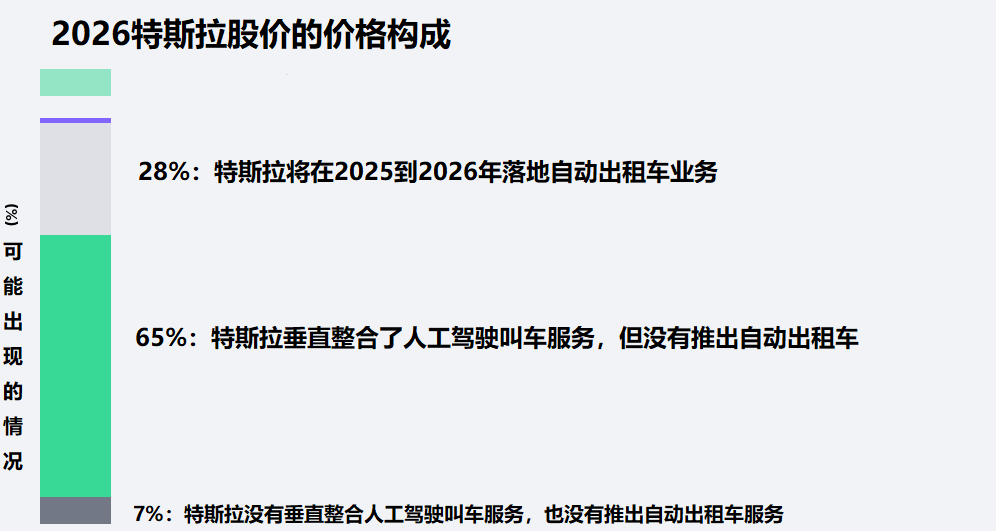 The following predictions are present in the updated model:

The Ark Fund has boosted Tesla’s market value estimate by about 2% due to its insurance business.

The model also factored in Tesla’s bitcoin holdings, as well as potential up or down swings in its price. While Tesla cannot value Bitcoin as an enterprise under current accounting standards, it is assumed that in 2026 investors incorporate Bitcoin’s impact on enterprise value into its market value. Ark Fund’s forecast for Tesla’s stock price in 2026 has risen by less than 5% due to Bitcoin.

Balance Sheet: The Ark Fund makes conservative assumptions about Tesla’s strategic financial decisions, arguing that these decisions will not be the main driver of Tesla’s share price appreciation.

Opportunity factors not included in the model

The limitations of Tesla’s batteries may not be resolved in the medium term. Since Tesla’s use of batteries for electric vehicles is the most profitable, Ark Fund does not expect Tesla’s energy storage business to be meaningful in driving enterprise value growth over the next five years.

Tesla has the ability to turn its battery system into a virtual power plant that dynamically distributes power to an overburdened grid, something the Ark Fund has yet to model. While Tesla could also accelerate its energy storage strategy by vertically integrating cryptocurrency mining and home high-voltage AC systems, the Ark Fund does not currently factor these factors into its current model.

Tesla has said it can train its Dojo supercomputer neural network as a service. Tesla said that Dojo is expected to do “something useful” this summer, but that the service may be outside the Ark Fund’s five-year forecast by the time the service can have a meaningful impact.

It forecasts that AI services that provide foundational models like Dojo could be worth as much as $20 trillion in enterprise value by 2030, but it also doesn’t include the option value of this nascent business in Tesla’s 2026 model.

Tesla can learn from factory automation and autonomous driving and become one of the few leading intelligent robot companies to build more general AI functions to develop basic models and embed them into robots. But the plan’s impact on revenue is likely to extend beyond the forecast model’s five-year time frame.

If any of these business opportunities develop faster than expected, they could be positive for Tesla’s stock price.

While the Ark Fund has adjusted its forecast for Tesla in 2026, it sees the Tesla model as conservative: it assumes Tesla’s stock price performance in 2026 is that of a mature company, not an emerging one. high growth company. The terminal multiple used in the model may be too low relative to Tesla’s likely growth in 2026, and that’s where it’s conservative.

Therefore, a given year can have a huge impact on stock price expectations. Extending the existing forecast in the model to 2027, both the price target and the compound annual rate of return have increased substantially. As shown below, if the model is extended to 2030, this conclusion is still obtained. That said, Ark Fund has not made explicit adjustments to the model’s time frame, which increases the potential risk of error.

For example, by 2030, there may be significant changes in vehicle form factors compared to current models, and some business opportunities that have not yet been modeled as data, such as artificial intelligence services, may benefit Tesla’s financial health. . 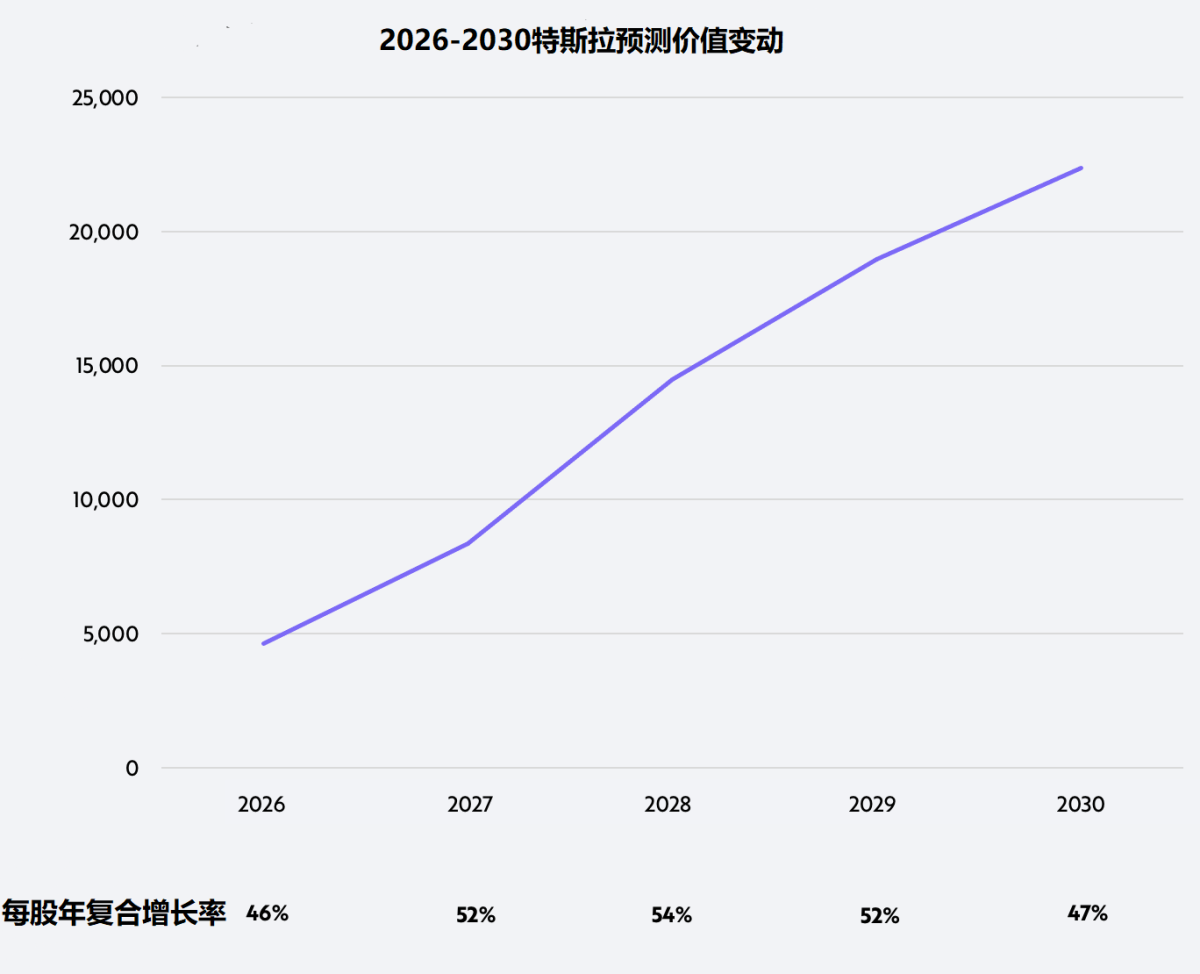 Given the update to Tesla’s forecast model, Ark Fund forecasts a $4,600 price target for Tesla in 2026. Its bear and bull market scenarios suggest that by 2026, Tesla’s stock price could be around $2,900 and $5,800, respectively, in those two scenarios.

This article is reprinted from: https://news.futunn.com/post/14603816?src=3&report_type=market&report_id=203299&futusource=news_headline_list
This site is for inclusion only, and the copyright belongs to the original author.