Skip to content
In 2022, there will be at least 20 large-scale strikes. 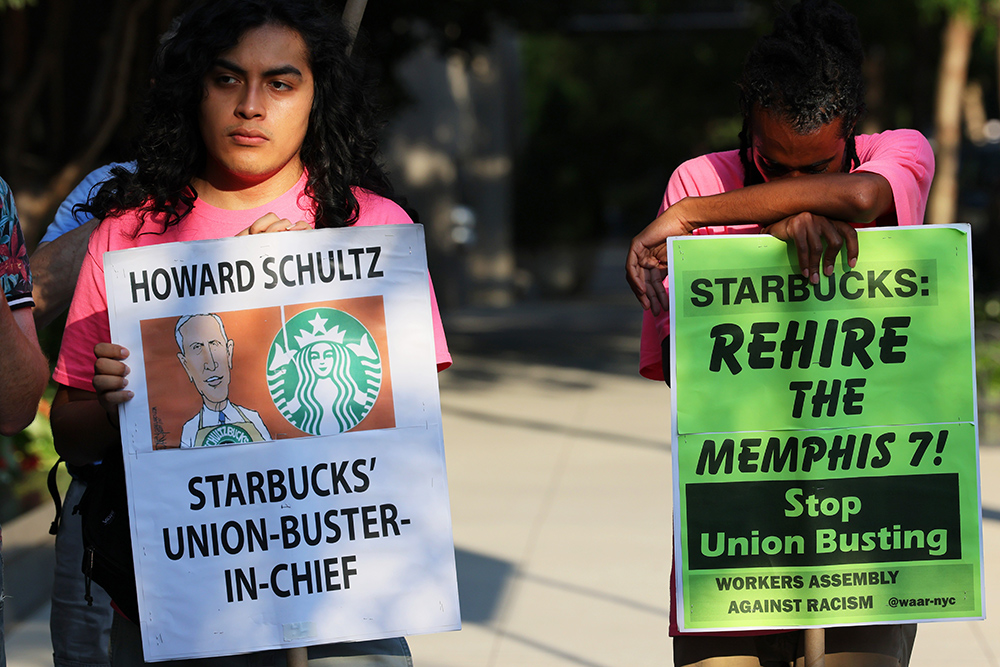 In 2022, more and more employees will join the organization, pull the cordon of strikes, and demand higher wages and better working conditions. Labor leaders and advocates are optimistic that the decline in the wealth of workers will usher in a turn for the better.

Among the tens of thousands of strikers, including teachers, journalists and baristas, the US Congress also passed a bill to prevent 115,000 railroad employees from striking. Overall, 2022 saw at least 20 large-scale strikes, each involving at least 1,000 workers, and hundreds of smaller stoppages, up from 16 in 2021.

Meanwhile, workers at Starbucks, Amazon, Apple and dozens of other companies filed more than 2,000 petitions to unionize during the year, the most since 2015 one year. Employees won as many as 76 percent of the 1,363 elections.

Historically, however, these numbers have been pretty modest. The number of mass shutdowns has been declining dramatically for decades. There were nearly 200 in 1980, and union elections before the 1980s typically numbered more than 5,000 a year. As of 2021, union membership is about the lowest on record at 10.3%. In the 1950s, more than a third of employees were unionized.

As a labor scholar, I agree with the available evidence that union activity has exploded. The inevitable next question is: Does the increase in activity numbers indicate that a tipping point has been reached?

The most notable sign of the revival of the labor movement is the rise in petitions filed with the National Labor Relations Board. In the 2022 fiscal year, which ended in September, employees filed 2,072 petitions, a 63 percent increase from the previous year. Starbucks employees alone filed 354 petitions and won most of the elections. Workers at companies traditionally considered union-unfriendly, including Apple, Microsoft and Wells Fargo, also won.

Increased strike activity is also important. Mass strikes involving at least 1,000 workers, tracked by the Bureau of Labor Statistics, have drawn the most attention, but are just the tip of the iceberg.

In 2022, the Bureau of Labor Statistics recorded 20 mass strikes, about 25% higher than the average of 16 per year over the past 20 years. Examples of large-scale strikes include the recent New York Times one-day strike, as well as two strikes in California involving more than 3,000 employees of medical company Kaiser Permanente, 2,100 workers at Frontier Communications and California 48,000 employees at the University of California. 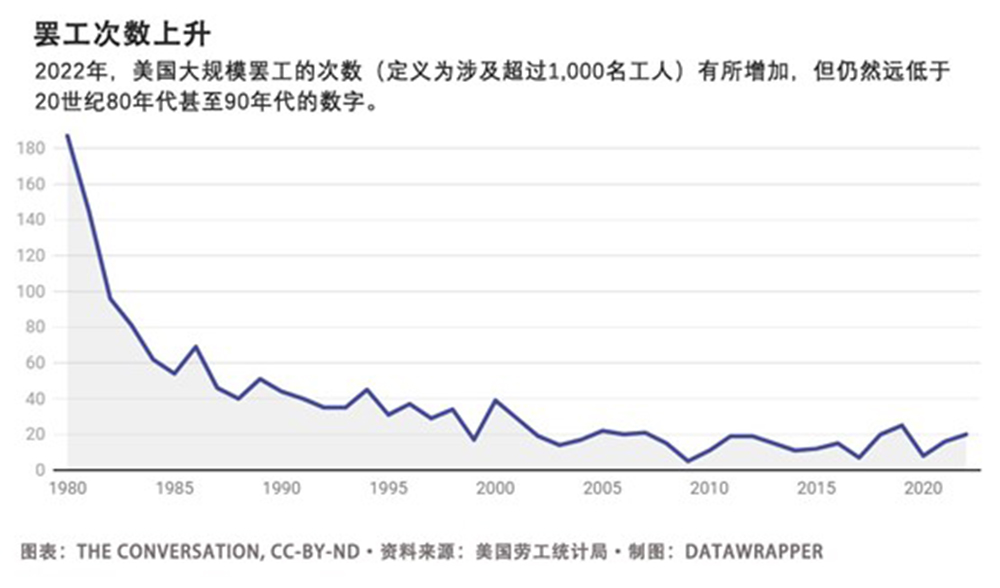 Cornell University, which has been tracking labor activity of all sizes since 2021, found 385 strikes in 2022, up from 270 the year before. The report said strike locations included nearly 600 locations in 19 states, giving an indication of the geographic scope of strike activity.

Of course, those numbers are still low by historical standards.

I think looking at the two strike peaks of the early 20th century is helpful in understanding whether recent events have driven union membership to continue to grow.

Both peaks occurred during times of U.S. and global turmoil. The first peak came in the second half of the Great Depression, when unemployment in the US hit a quarter. Economic impoverishment and lack of workplace protections lead to a proliferation of political and social activism, resulting in a plethora of actions to organize workers. That peak also led to the enactment of the National Labor Relations Act of 1935, which spurred union growth in industry.

The second peak is when the United States mobilizes economic development for two-front operations in Europe and Asia. The nation’s economic mobilization in support of the war spurred manufacturing job growth, and labor unions thrived. At that time, the government issued wartime policy to encourage unionization in order to achieve a wartime industrial peace agreement.

The current situation is very different from the economic distress of the Great Depression or the social upheaval of a global war, but there are some similarities worth exploring.

Overall unemployment may be near record lows now, but economic inequality is higher than it was during the Great Depression. The top 10% of households in the United States own more than 68% of the wealth. In 1936, the proportion was about 47%.

Another thing is similar to two historical precedents. At a time when the COVID-19 outbreak in early 2020 required a massive response across society, workers in industries often seen as critical, such as health care, public safety, and food and agriculture, were destined to suffer the most, and their tireless efforts won ” Hero” title. In the current environment, employees have come to appreciate the protection that unions provide for occupational safety and health, which eventually promotes recently hyped employment trends, such as “great resignation” and “quiet quitting”.

However, in the end, opposition to unions remained strong, labor laws were not supported, and few companies were sincerely willing to join unions.

Unions have struggled to grow because of their limited ability to change public policy or the structure of the U.S. economy. Legislative reform of labor laws remains elusive, and the outcome of the 2022 midterm elections is unlikely to smooth that path.

So I don’t think the recent signs of progress will be a tipping point.

The trump card in the hands of labor groups may be public sentiment. A Gallup poll in August 2022 shows that the support rate for protecting labor rights has reached the highest since 1965, with 71% of people saying they support trade unions. Employees are increasingly interested in unionizing. In 2017, 48 percent of workers surveyed said they would vote for union representation, up from 32 percent in 1995 in the previous survey.

Future success may depend on the union’s ability to capitalize on growing popularity and replicate recent victories at Starbucks and Amazon, as well as the successful “Fight for $15” campaign. The movement, which began in 2012, has helped pass a $15 minimum wage in more than a dozen states and Washington, DC.

The road ahead is unpredictable, but the seeds of opportunity have been planted, and it is only for labor organizations to take full advantage of them. (Fortune Chinese website)

Marick Masters is a professor of business and an adjunct professor of political science at Wayne State University.

This article is reproduced from The Conversation website with permission from Creative Commons.

Workers organized and took to the picket line in increased numbers in 2022 to demand better pay and working conditions, leading to optimism among labor leaders and advocates that they’re witnessing a turnaround in labor’s sagging fortunes.

Teachers, journalists and baristas were among the tens of thousands of workers who went on strike – and it took an act of Congress to prevent 115,000 railroad employees from walking out as well. In total, there have been at least 20 major work stopping pages at involvement at least 1,000 workers each in 2022, up from 16 in 2021, and hundreds more that were smaller.

At the same time, workers at Starbucks, Amazon, Apple and dozens of other companies filed over 2,000 petitions to form unions during the year – the most since 2015. Workers won 76% of the 1,363 elections that were held.

Historically, however, these figures are pretty tepid. The number of major work stoppages has been plunged for decades, from nearly 200 as recently as 1980, while union elections typically exceeded 5,000 a year before the 1980s. about the lowest level on record, at 10.3%. In the 1950s, over 1 in 3 workers belonged to a union.

As a labor scholar, I agree that the evidence shows a surge in union activism. The obvious question is: Do these developments manifest a tipping point?

The most noteworthy sign of labor’s revival has been the rise in the number of petitions filed with the National Labor Relations Board. In fiscal year 2022, which ended in September, workers filed 2,072 petitions, up 63% from the previous year. Starbucks workers alone filed 354 of these petitions, winning the vast majority of the elections held. In addition, employees at companies historically deemed untouchable by unions, including Apple, Microsoft and Wells Fargo, also scored wins.

The increase in strike activity is also important. And while the major strikes that involve 1,000 or more employees and are tracked by the Bureau of Labor Statistics arouse the greatest attention, they represent only the tip of the iceberg.

Since 2021, Cornell University has been keeping track of any labor action, however small, and found that there were a total of 385 strikes in calendar year 2022, up from 270 in the previous year. In total, these reported strikes have occurred in nearly 600 locations in 19 states., signifying the geographic breadth of activism.

Of course, these figures are still quite low by historical standards.

I believe two previous spikes in the early 20th century offer some clues as to whether recent events could lead to sustained gains in union membership.

Both spikes occurred during periods of national and global upheaval. The first spike came in the latter half of the Great Depression, when unemployment in the US reached as high as a quarter of the workforce. Economic deprivation and a lack of workplace protections led to widespread political and social activism and sweeping efforts to organize workers in response. It also contributed to the enactment of the National Labor Relations Act in 1935, which stimulated organizing in the industrial sector.

The second jump came as the US mobilized the economy to fight a two-front war in Europe and Asia. National economic mobilization to support the war led to growth in manufacturing employment, where unions had been making substantial gains. Government wartime policy encouraged as unionized part of a bargain for industrial peace during the war.

Today’s situation is a far cry from the economic misery of the Great Depression or the social upheaval of a global war, but there are some parallels worth exploring.

Overall unemployment may be near record lows, but economic inequality is higher than it was during the Depression. The top 10% of households hold over 68% of the wealth in the US In 1936, this was about 47%.

Another parallel to the two historical precedents concerns national mobilization. The pandemic required a massive response in early 2020, as workers in industries deemed essential, such as health care, public safety and food and agriculture, bore the brunt of their impact, the earning label “heroes” for their efforts. In such an environment, workers began to appreciate more the protections they derived from unions for occupational safety and health, eventually helping birth much-hyped recent labor trends like the “great resignation” and “quiet quitting. “

Ultimately, however, the deck is still heavily stacked against unions, with unsupportive labor laws and very few employers showing real receptivity to having a unionized workforce.

And unions are limited in how much they can change public policy or the structure of the US economy that makes unionization difficult. Reforming labor law through legislation has remained elusive, and the results of the 2022 midterms are not likely to make it any easier.

This makes me unconvinced that recent signs of progress represent a turning point.

An ace up labor’s sleeve may be public sentiment. Support for labor is at its highest since 1965, with 71% saying they approve of unions, according to a Gallup poll in August 2022. And workers themselves are increasingly showing an interest in joining the In 2017, 48% of workers polled said they would vote for union representation, up from 32% in 1995, the last time this question was asked.

Future success may depend on unions’ ability to tap into their growing popularity and emulate the recent wins at Starbucks and Amazon, as well as the successful “Fight for $15” campaign, which since 2012 has helped pass $15 minimum wage laws in a dozen states and Washington, DC

The odds may be steep, but the seeds of opportunity are there if labor is able to exploit them.

Marick Masters is a Professor of Business and Adjunct Professor of Political Science, Wayne State University.

This article is republished from The Conversation under a Creative Commons license.

This article is reproduced from: https://www.fortunechina.com/shangye/c/2023-01/24/content_426545.htm
This site is only for collection, and the copyright belongs to the original author.