In the domestic cloud computing industry, the SaaS (software as a service) track has gradually become the focus of competition. Cloud giant players are gradually adding to this track, such as Alibaba Cloud’s “Cloud Nail Integration” strategy and Tencent Cloud’s “Thousand Sails Plan”. At the same time, domestic SaaS startups have also received financing frequently. According to statistics from Zhixi, nearly 100 SaaS companies have received financing of more than 10 million yuan in the first four months of this year alone.

Compared with the domestic SaaS track, there have been many giant players in the foreign SaaS track, such as the American SaaS pioneer Salesforce. Founded in 1999, Salesforce initially focused on CRM (customer relationship management), and then gradually covered multiple SaaS segments such as finance, taxation, and human resources. The market value of Salesforce has reached a maximum of 308.8 billion US dollars, and it is the target of many domestic SaaS companies.

From going public in 2004 to 2021, Salesforce’s annual revenue has grown more than 200 times. However, starting from the end of 2021, Salesforce’s share price has fluctuated downwards, and its current market value is $181.558 billion, which has shrunk by more than one-third compared to its market value at the peak. According to its latest financial report data released at the end of May, Salesforce’s net profit in the first fiscal quarter of fiscal 2023 (corresponding to February-April 2022 of the calendar year) was $28 million, a year-on-year decrease of 94%.

As a leading player in the foreign SaaS track, Salesforce’s development path can provide a certain reference for domestic SaaS companies. So, how has Salesforce developed in recent years? How did you achieve a 200-fold increase in revenue step by step? What challenges does Salesforce face today?

Salesforce’s profitability is less stable than its steadily growing top line. According to the latest earnings data, Salesforce’s net profit in its fiscal first quarter of fiscal 2023 was $28 million, a 200% increase from the previous quarter and a 94% decrease from the same period last year. Salesforce returned to profitability after a brief loss in the fiscal fourth quarter of 2022. Before the fourth quarter of fiscal 2022, Salesforce has maintained a positive net profit for seven consecutive quarters. Fluctuations in Salesforce’s net profit are related to its more frequent big-ticket acquisitions, such as the signing of its consulting partner and app development company Traction on Demand in late February 2022. 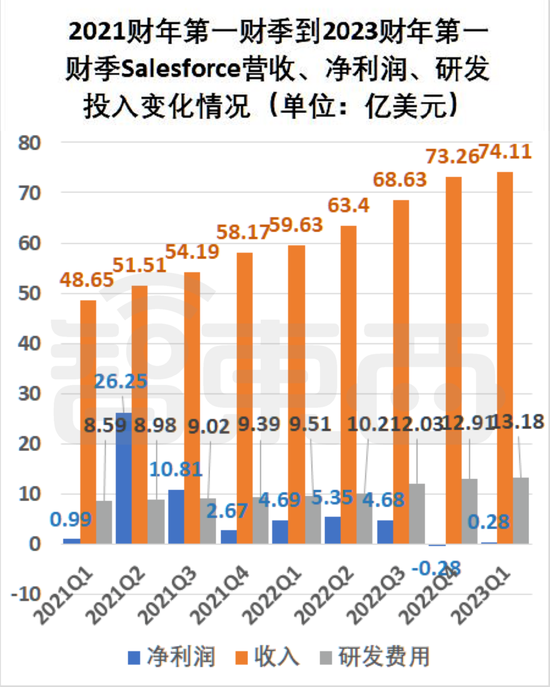 Salesforce’s data for the first quarter of fiscal 2023 can represent a subset of Salesforce’s latest developments. We also mainly analyze the financial report data of the fiscal quarter. Salesforce’s revenue is mainly divided into subscription and support services business segment, professional services and other segments.

In the first quarter of fiscal year 2023, the revenue of these five business categories of Salesforce was $1.632 billion, $1.761 billion, $1.419 billion, $1.089 billion, and $955 million; the year-on-year growth was 20%, 19%, and 58%, respectively. %, 24%, 15%. The cloud platform and other business segment recorded the largest year-over-year revenue growth. Among these five types of business, service cloud accounts for the highest proportion of revenue. 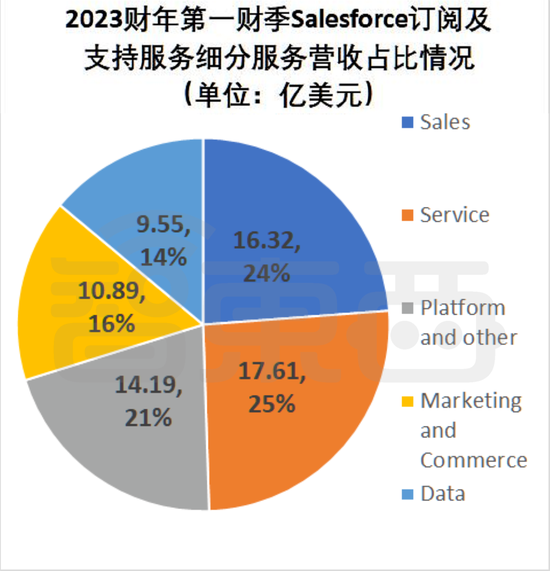 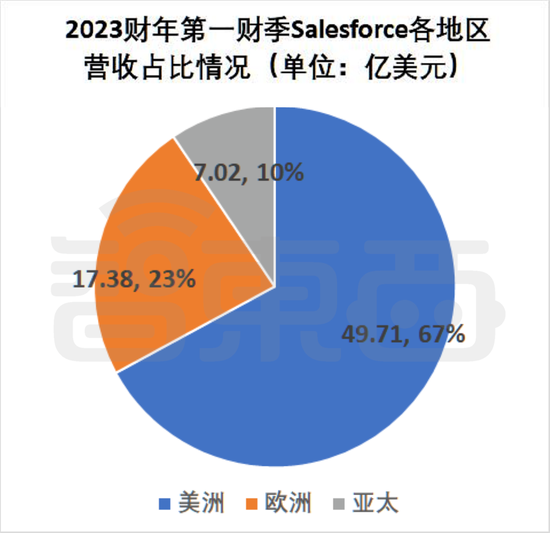 Affected by factors such as the U.S. stock market environment, Salesforce’s stock price has continued to fall since December last year, and its current market value is $181.558 billion, close to the market value before the surge in 2020; however, since Salesforce went public 18 years ago, its market value has increased from 2004 The $1.1 billion when it was listed in the year has increased nearly 200 times. Behind it, this company has been constantly breaking through the ceiling of its existing business.

So how did Salesforce grow from a small company with a valuation of $1.1 billion and revenue of less than $100 million to a tech giant with a market value of over $180 billion and annual revenue of nearly $26.5 billion?

In 1999, Salesforce was established in San Francisco, USA. Salesforce chairman and CEO Marc Benioff (Marc Benioff) is one of the four founders, he was a senior vice president of Oracle, is the industry’s more recognized SaaS model of the earliest practitioners. 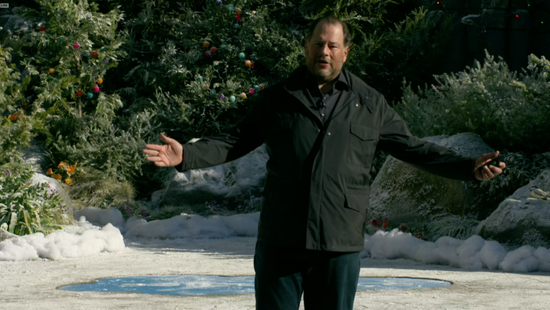 Salesforce’s original product, or arguably its core product, was a customer relationship management (CRM) system. All software and key customer data are hosted online and offered to users as a subscription service. In simple terms, CRM is a technology that manages all customer and potential customer relationships and interactions in a company. Salesforce can help business users organize customer resources through its CRM software.

In March 1999, the four founders Mark Benioff, Parker Harris, Frank Dominguez and Dave Moellenhoff started developing Salesforce The first version of CRM. In the early days of its establishment, Salesforce has begun to provide Sales Cloud services to the outside world.

Before 2005, Salesforce mainly enhanced the application functions of CRM and expanded the layout of SaaS, including launching the first SaaS application CRM, the first public enterprise cloud computing API program Sforce, and so on. Several important events include the theme event of “The End of Software” held in 2000 to promote its concept; the industry’s first on-demand application service sForce 2.0 launched in 2003; the New York Stock Exchange in June 2004 listed etc. At the end of the fiscal year on January 31, 2005, Salesforce’s revenue exceeded 100 million.

Salesforce often uses the acquisition of other businesses to lay out or expand its business. For example, in 2011, Salesforce acquired social media monitoring company Radian6, expanding its corporate social capabilities to include marketing. In 2016, Salesforce acquired e-commerce platform Demandware, expanding its customer success platform into the retail industry and introducing Commerce Cloud. In 2019, Salesforce completed a blockbuster acquisition: Tableau, a world-renowned analytics platform, with an acquisition value of $15.7 billion. Buying chat software company Slack for $27.7 billion in 2021.

On the way to becoming a giant, Salesforce has not been limited to CRM, but has gradually developed into a platform, taking into account various SaaS services such as sales, service, and marketing, and has also deployed a PaaS platform earlier. Based on the PaaS platform, Salesforce’s SaaS capabilities have been further released. 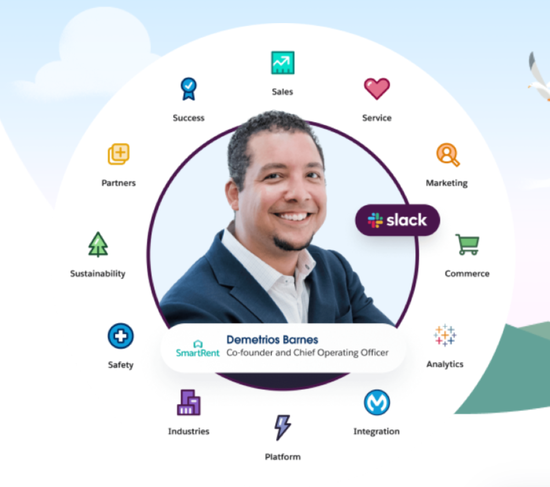 Salesforce has now formed a complete product suite: Customer 360, which mainly connects users’ sales, service, marketing, commerce, and IT teams with a single or shared view of customer information to create connections.

Salesforce also integrates AI into its products, focusing on building an ecosystem of SaaS+CRM+AI.

There is no world giant SaaS company with a market value of more than 180 billion US dollars (about 1197.612 billion yuan) like Salesforce. However, there have also been some leading players in the domestic SaaS track, such as UFIDA and Kingdee.

According to Gartner, UFIDA is the only Chinese vendor in the 2021 Asia-Pacific TOP5 for high productivity APaaS, ranking second only to Salesforce and ServiceNow. According to IDC data, Kingdee Software won the first place in China’s SaaS cloud service market in the first half of 2021.

From the perspective of cutting into the cloud computing track and deploying SaaS, Kingdee and UFIDA are a little later than Salesforce. In 2011, Kingdee proposed the “cloud management” strategy, relying on mobile Internet, cloud computing and other technologies, this is its third transformation. The first two were financial software transformation for Windows and ERP transformation. UF is from around 2011 to increase the layout in the field of cloud computing. Salesforce has been cultivating deeply in the SaaS field since its establishment.

In addition to the development factors of the enterprises themselves, there are differences in the market environment faced by UFIDA, Kingdee and Salesforce. For example, the process of Salesforce’s business expansion in China is not very smooth, and its largest market is in Europe and the United States. There are differences in the needs of domestic and foreign enterprise users.

In general, UFIDA, Kingdee and Salesforce have differences in the initial entry into the track, typical products, and SaaS time, etc., but there are still differences in the layout of the PaaS track, the growth of products covering subdivisions, and the types of companies covered by products. some similarities.

As the first company to practice the SaaS concept, Salesforce has successfully secured its position as the top player in the global SaaS track, with an annual revenue of nearly $26.5 billion and a market value of over $180 billion. At present, Salesforce’s products are no longer limited to the CRM field initially laid out. The company also involves several more subdivided SaaS tracks such as intelligent quotation, labor management, and digital marketing.

This article is reproduced from: http://finance.sina.com.cn/tech/csj/2022-07-25/doc-imizirav5377824.shtml
This site is for inclusion only, and the copyright belongs to the original author.