“Chinese brands have ushered in a milestone historical moment.” The Passenger Federation issued such a comment.

On April 11, the China Passenger Car Association announced the ranking of manufacturers in the domestic passenger car market in March this year. In the ranking of wholesale sales, Changan Automobile surpassed the North and South Volkswagen with 132,000 units and won the top spot.

However, this situation may soon usher in a change.

According to Deng Chenghao, general manager of Changan New Energy, the Deep Blue C385 will launch three power versions for consumers to choose from.

It is worth noting that the C385 hydrogen-electric version will be the first mass-produced hydrogen fuel cell car in China.

In fact, hydrogen fuel cells are not a new technology. On the question of who is the end of new energy vehicles, hydrogen and lithium have formed two factions, and the debate between the two sides has lasted for decades.

Due to the characteristics of zero-carbon emission, high energy density and fast charging speed of hydrogen fuel cells, the “Hydrogen” party is very confident in them, and firmly believes that hydrogen fuel cell vehicles will replace lithium battery vehicles.

However, due to many issues such as cost and policy, hydrogen fuel cells have not been applied on a large scale, and currently only penetrated in the field of commercial vehicles.

Mainline logistics heavy trucks are the main areas where many companies are currently deploying hydrogen energy. For companies planning to produce hydrogen-powered heavy trucks, the current progress is mostly in the research and development stage, or only prototype/concept cars are displayed, and the cost of a single vehicle is high.

From this point of view, the hydrogen-electric version of the dark blue C385 may be a “only seedling” of hydrogen-powered passenger cars in a short time.

The domestic hydrogen fuel cell vehicle industry chain is immature. The upstream production of green hydrogen, hydrogen transport, hydrogen storage, and hydrogenation, to the midstream and downstream research and development, production and application of hydrogen fuel cells and systems are still in the product introduction stage.

Another highlight of this conference is undoubtedly the all-electric digital platform EPA1 on the Deep Blue C385. The platform claims to have achieved four highs: high efficiency, high performance, high intelligence, and high security. In terms of high efficiency, the EPA1 platform is equipped with Changan’s new-generation super-collector drive, with a maximum efficiency of 95%. Its micro-nucleus high-frequency pulse heating technology can achieve a battery temperature rise of 4°C/min at -30°C, a 50% increase in low-temperature power, and a 15% reduction in low-temperature charging time.

In terms of high performance, the EPA1 platform has achieved great progress in the development of rear-wheel drive and dual-motor four-wheel drive. The combination of the latest-generation braking dual-redundancy system and the H-arm multi-link independent suspension system can effectively shorten the braking distance and improve ride comfort.

In terms of high intelligence, the EPA1 platform supports global ultra-fast OTA, and is equipped with an intelligent vehicle domain controller “Changan Smart Core”, which can achieve 70% performance improvement, 70% volume reduction, and full coverage of remote diagnosis. In addition, its high computing power intelligent cockpit domain controller is equipped with 8155 chip, and the computing power can reach 105K DMIPS.

In terms of high safety, Changan adopts a five-horizontal and nine-vertical encircling body design, which accounts for more than 45% of high-strength steel to ensure the safety of the platform and the surrounding area of ​​the battery.

With the exposure of several first-launch technologies of the Deep Blue C385, and the hydrogen-electric version pushing the model to a higher strategic position, Changan’s determination to the new energy market is evident.

Five years of sharpening a sword, Frostblade never tried. Chang’an’s battle for new energy seems to have already started and rushed to the battlefield.

Changan has a long history in the layout of the new energy market.

In 2015, Changan released its new energy strategic plan for the first time, clearly focusing on pure electric drive, and simultaneously developing plug-in hybrid and pure electric technology platforms. At that time, “Weixiaoli” was just established, and the domestic new energy vehicle market was blank. Changan Automobile’s strategy at that time was “far-sighted”.

In 2017, Changan Automobile made the second new energy strategy adjustment and released the Shangri-La strategy.

The second strategic adjustment has also formulated the Beidou Tianshu plan, focusing on the software level and conducting in-depth research and development around the field of intelligent network connection. So far, Changan’s sales volume of ICVs has increased to 72.4%, and 100% of newly launched passenger vehicles after 2020 have been connected to the Internet.

In April this year, Changan ushered in the third new energy strategy adjustment.

Not long ago, on April 13, Changan Automobile announced that Changan New Energy Vehicle will be renamed as Deep Blue, and plans to launch 8 new energy vehicle products in 2022.

In the first quarter of this year, Changan Automobile’s new energy sales reached 30,645 units, a year-on-year increase of 189.8%. The data is very bright. But looking closely, the sales of one model of Benben EV reached 26,119 units, accounting for 85%.

Changan’s other new energy vehicles, including some “oil-to-electricity” products, do not have an advantage in the new energy vehicle market itself. In addition, the sales volume is very small, and it may only be a matter of time before they are eliminated.

To put it bluntly, there is only one new energy vehicle under Changan that can play – Benben EV.

The official guide price of Benben EV starts from 29,800 yuan, and its benchmark model is undoubtedly the Wuling Hongguang MINIEV.

It is an industry consensus that low-priced vehicles do not have bargaining power in the new energy vehicle market. Even if their sales continue to grow by virtue of the “more gross profit” route, this is obviously not the future that Changan, the overlord of fuel vehicles, wants. If this continues, it will even affect whether Changan can enter the mainstream new energy vehicle track in the future.

Therefore, at this moment when the competition in the new energy vehicle market is intensifying, finding new models to occupy a position in the market besides Benben EV is what Changan wants to do most.

Avita in March and Deep Blue in April have naturally become the targets of Changan’s bets.

And the upcoming dark blue C385, although the price has not been announced, but the rumored price of 200,000-300,000 should be a high probability event.

At present, the field of 200,000-300,000 is a battleground for major auto companies. Tesla Model 3, Xiaopeng P7, Weilai ES6, and BYD-Han have already fought together in this market segment. The first battle of the Deep Blue C385 is to help Changan gain a firm foothold in this field, which is not too difficult.

If the sales of Benben EV can be sustained, and then use Deep Blue and Avita to open up the mid-to-high-end market, in the future era of new energy, Changan may also be able to catch up.

Cold hardiness will be a standard capability

Before the press conference, the promotional video screened by Changan was meaningful. In the one-minute-long promotional video, all the shots are related to ice and snow, and all the scenes are set below minus 30 degrees.

Combined with the new technology micro-nucleus high-frequency pulse heating introduced at this conference, it can be heated to 20°C in 5 minutes in an extremely cold environment of -30°C. With the waste heat recovery technology, the cruising range can be increased by 40-70km.

Chang’an’s spearhead is about to come out – north of the Yangtze River.

The ability to withstand cold and durability may also become the standard configuration of the dark blue C385.

You must know that electric vehicles are known as “electric fathers” in winter in the north. They lose power quickly and have a short battery life.

Some netizens have actually measured that driving an electric car in Guangzhou to the Northeast for Chinese New Year. The road section from Jiangxi to Hebei has greatly shortened its cruising range, and it is even more miserable after Shanhaiguan.

If the micro-nucleus high-frequency pulse heating technology introduced by Changan can make electric vehicles take off the hat of “electric father” in the north, then the appearance of the dark blue C385 is indeed of great significance.

Today’s press conference also introduced the principle of the technology.

This technology drives the IGBT to turn on and off very quickly to generate a large current of rapid positive and negative switching, and then uses the characteristics of large internal resistance of the battery at low temperature to quickly and evenly heat the battery itself. It has applied for more than 50 patents. 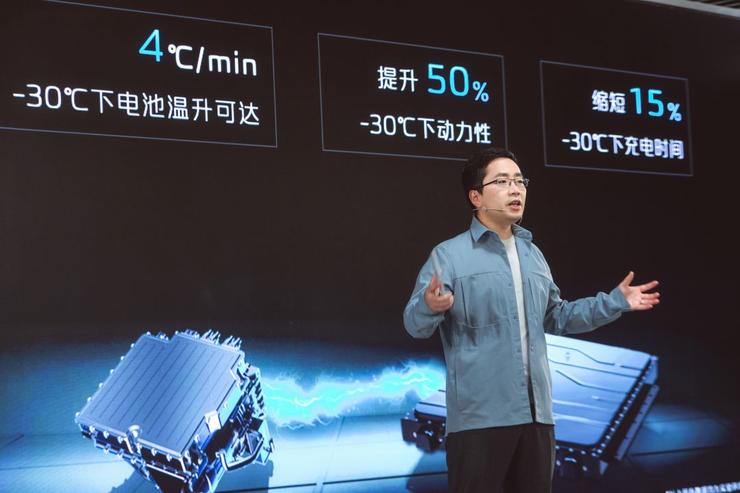 In this case, whoever can truly solve the pain points of northern users will have one more chance of winning.

Changan also stated that the Deep Blue C385 will be delivered within the year, with an estimated production capacity of 60,000 units.

Zhu Huarong once publicly stated, “In the next 3-5 years, 80% of China’s fuel vehicle brands will be shut down and transferred.”

Today, when the competition in the new energy vehicle market has become fierce, Changan’s new energy shortcomings have already skipped the logical ailment, become a skin pain, and even moved towards a gastrointestinal disease.

This year, Avita and Deep Blue have been released one after another, and the upcoming 8 new energy vehicle products are all pure electric instead of oil-to-electricity, which shows Changan’s determination to develop new energy.

Changan’s new energy strategy has come to a decisive stage. In the future, whether Changan will still be the overlord of car companies, we may see the answer in a few years.

This article is reproduced from: https://www.leiphone.com/category/transportation/DB1m5aaEVHTCOJLQ.html
This site is for inclusion only, and the copyright belongs to the original author.