According to foreign media reports, the headquarters of Deutsche Bank (Deutsche Bank) in Frankfurt, Germany was jointly raided by German police, prosecutors and financial regulators. It is understood that the German police have not disclosed the reasons for the operation, and it is not clear whether it is related to the European Union’s financial sanctions against Russia.

Prosecutors said in a statement that the search warrant, issued by the Frankfurt district court, suspects that the unnamed Deutsche Bank employee may have violated anti-money laundering laws, and declined to give further details.

Some foreign media said that Deutsche Bank has confirmed the “raid” search and said that it was related to the report of suspicious activity related to money laundering, adding that the investigation was fully coordinated with the supervision of the authorities. 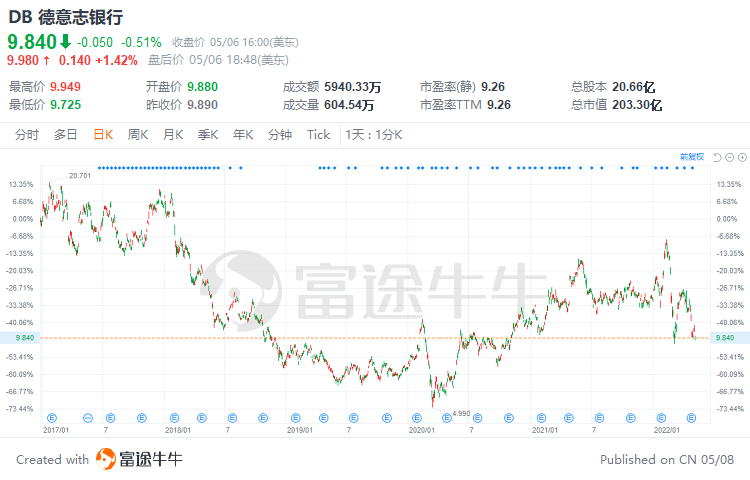 Recently, it was reported that the German Federal Police, criminal prosecutors and BaFin, the German financial institution regulator, raided the Frankfurt headquarters of Deutsche Bank. Local German media reported that the incident may be related to the bank’s alleged involvement in money laundering.

According to public information, as the largest bank in Germany, Deutsche Bank was founded in 1870 and is headquartered in Frankfurt. The bank’s latest financial report shows that in the first quarter of this year, its profit achieved a high growth of 17%.

After the headquarters in Frankfurt was jointly searched by the German police and prosecutors, a spokesman for the bank said that the incident was caused by Deutsche Bank employees who discovered that customers may be suspected of money laundering when dealing with a business, and reported to the regulatory authorities as required. Police and regulatory authorities Immediately with a search warrant issued by the judge, he went to the bank to collect evidence, and Deutsche Bank is fully cooperating with the investigation.

The British “Guardian” said that German authorities have raided Deutsche Bank’s headquarters in Frankfurt because the country’s largest bank is suspected of money laundering. Officials from the financial regulator, the Federal Police and the Frankfurt prosecutor’s office raided the bank’s offices on Friday morning local time after obtaining a search warrant from the local court – the landmark known locally as the “Twin Towers”, the report said. architecture.

“This is an investigative measure by the Frankfurt prosecutor’s office into suspicious activity reports (SARs) filed by the bank,” the bank said in a statement. “Deutsche Bank is fully cooperating with the authorities.”

Under regulatory requirements, banks and other financial institutions file SAR reports with law enforcement agencies when they suspect that customers may be using their services for potential criminal activity. However, filing a SAR report does not mean that the customer has committed wrongdoing or asks the bank to stop doing business with the customer. The Deutsche Bank investigation may be related to the delayed submission of the SAR report.

Repeatedly caught up in compliance scandals

Foreign media said the raid was a blow to the bank’s chief executive, Christian Sewing. Since taking office, he has pledged to push for reforms, especially at the compliance level.

In 2018, 170 police officers carried out a two-day raid in which Deutsche Bank workers were accused of helping wealthy clients evade taxes. Prosecutors later dropped their investigation of the two employees but fined the lender for its inadequacy of compliance procedures. Deutsche Bank has struggled to repair its reputation after a series of scandals and links to controversial clients.

“We have significantly reduced our legal risk.” In 2019, Deutsche Bank publicly stated that the bank was strengthening internal controls and launched a fundamental reform to improve the bank’s compliance.

In recent years, Deutsche Bank has long been under fire from regulators, especially for its poor performance in anti-money laundering controls. A few years ago, the UK Financial Supervisory Authority again ordered Deutsche Bank to improve its compliance capabilities. At the time, Germany’s financial watchdog expanded its scope and extended the tenure of consulting firm KPMG as a special representative in September 2018 to oversee lenders’ progress on strengthening internal controls.

The bank was fined $630m (£501m) in 2017 after regulators in the US and UK accused it of failing to detect fraud worth up to $1bn. Just two years ago, it was fined by the authorities for allegedly manipulating Libor rates between 2003 and 2007.

Earlier, a former Deutsche Bank employee helped regulators in the United Kingdom and the United States investigate Deutsche Bank, reporting that the bank had improperly manipulated the LIBOR rate, the largest expenditure in the history of the U.S. Commodity Futures Trading Commission (CFTC) whistleblower program. a bonus.

Just last year, the U.S. Commodity Futures Trading Commission (CFTC) announced that it had awarded a bonus of nearly $200 million (about 1.2 billion yuan) to a former employee of Deutsche Bank, the highest bonus ever issued under the U.S. whistleblower program. .

The U.S. authorities watchdog said the timely provision of raw information by employees was instrumental in subsequent public investigations. “This resulted in a successful enforcement action by U.S. federal regulators and foreign regulators, and two related successful actions,” the CFTC said in a statement, without disclosing the whistleblower, his employer or the relevant regulatory action.

People familiar with the matter told Reuters that the employee’s whistleblower report was related to a $2.5 billion settlement that Deutsche Bank paid following a regulatory probe into the manipulation of the London interbank offered rate (Libor). The London Interbank Offered Rate (Libor), an interest rate benchmark that underpins global finance, was found to be rigged by bankers a decade ago.

The Kirby McInerney law firm confirmed in a statement that the award-winning whistleblower was its client who “provided a substantial amount of information, documents and transactions in 2012,” sparking the CFTC and U.S. and foreign regulators An investigation into the “manipulation of key financial benchmarks used by global banks.”

This article is reprinted from: https://news.futunn.com/post/15312664?src=3&report_type=market&report_id=204927&futusource=news_headline_list
This site is for inclusion only, and the copyright belongs to the original author.