Recently, the US dollar index has been emphasized , and many people will wonder: What is the relationship between the US dollar and the stock market, and is it worth paying attention to? The answer is very worthwhile. The U.S. dollar index is a bright light guiding our asset allocation. 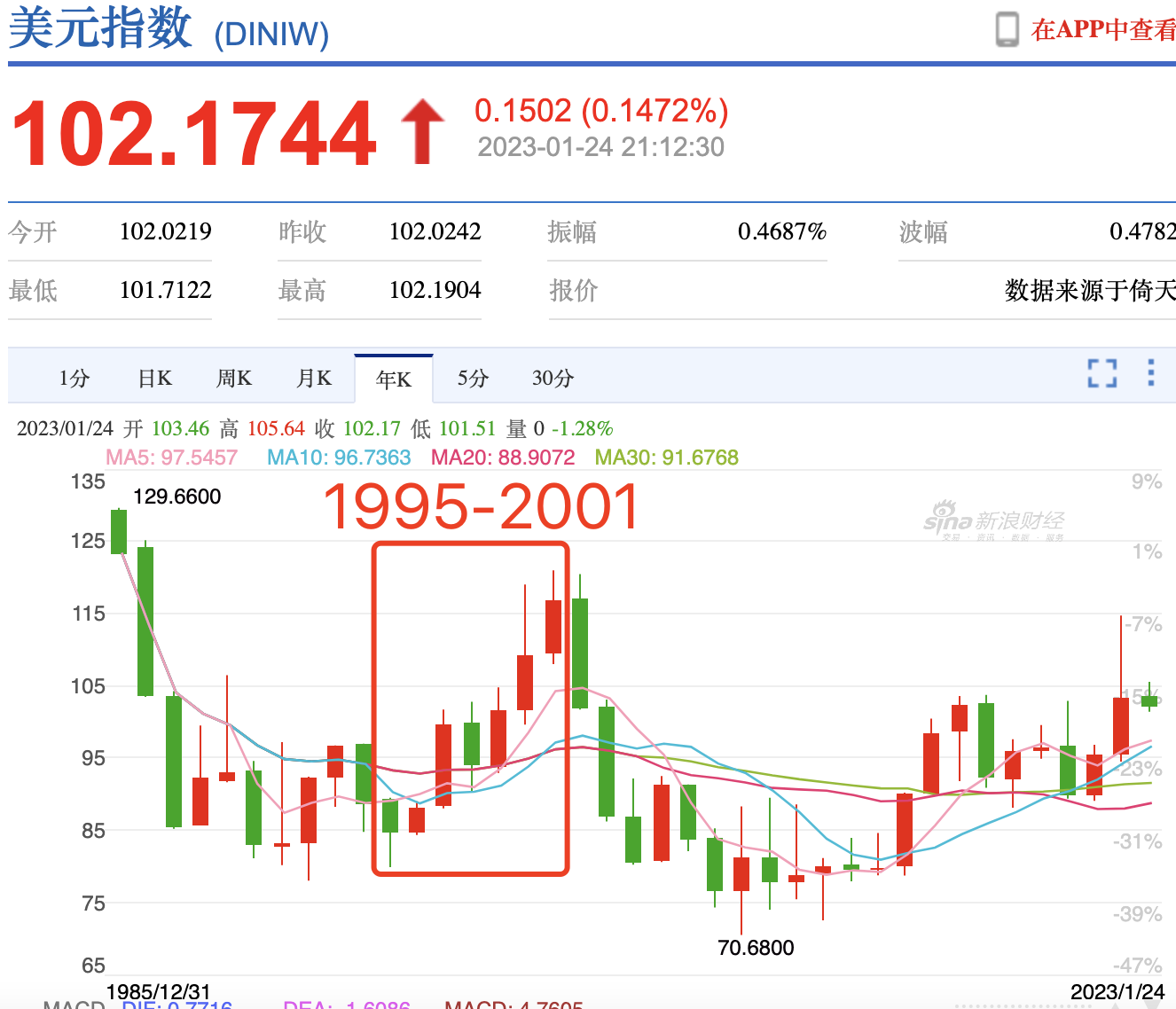 Beginning in 1994, the Federal Reserve entered into a cycle of raising interest rates. From February 1994 to February 1995, after raising interest rates seven times in a row, the target rate of the federal funds increased by 300 BP from 3.00% to 6.00%. High interest rates caused capital to flow back to the United States, coupled with the economic bubble in Southeast Asia at that time, detonated risky assets in Southeast Asia, and Hong Kong stocks were also greatly affected: 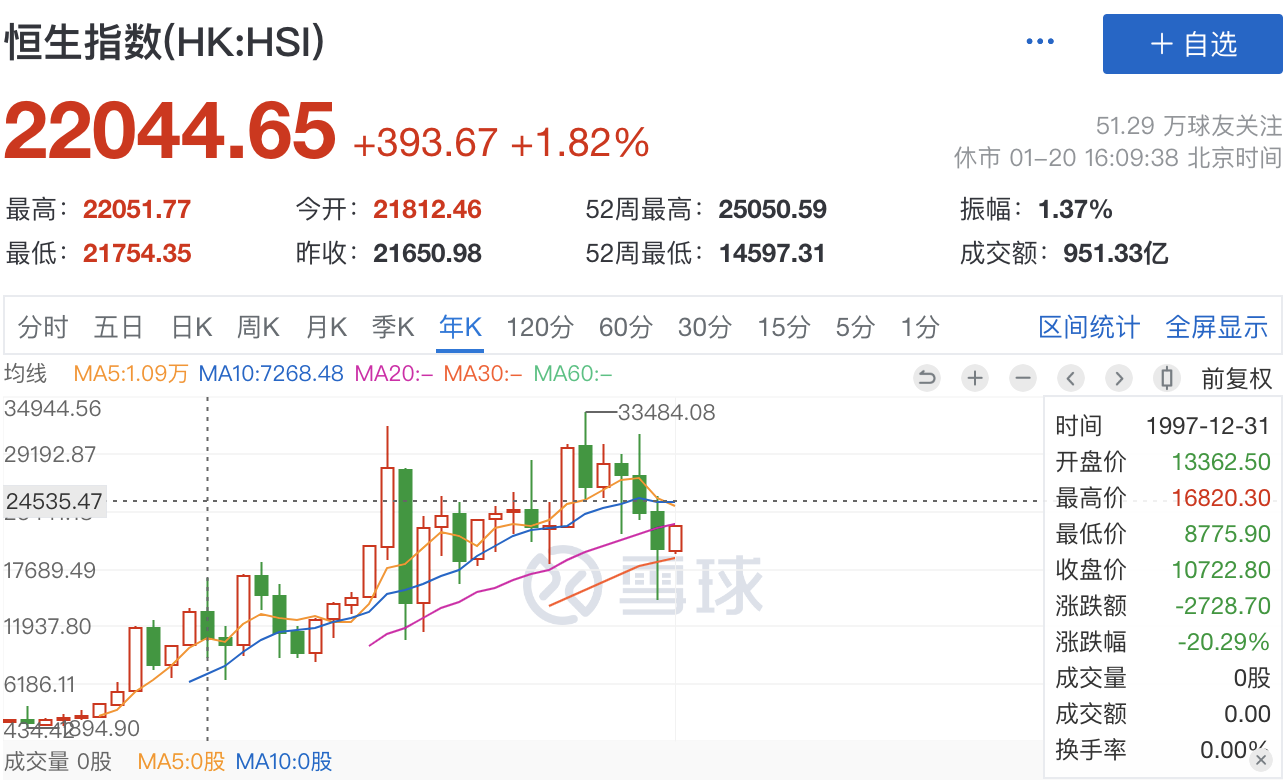 The detonation of the Southeast Asian economy temporarily interrupted the pace of the Fed’s interest rate hikes, but the rate hikes came back in 1999. From June 1999 to May 2000, after six consecutive rate hikes, the federal funds target rate increased by 175 BP from 4.75% to 6.50 %, superimposed on the crazy high valuation of Internet stocks, punctured the Internet bubble.

Therefore, the systematic upward movement of the U.S. dollar index from 1995 to 2001 caused two huge problems.

From 2001 to 2008, the dollar weakened systematically, which was a very peaceful period in the world. In 2001 and 2009, the Federal Reserve entered a cycle of interest rate cuts, China joined the WTO, the process of globalization was remarkable, and the world economy was booming. These were very beautiful days:

After that, the U.S. dollar index went sideways for many years until it made a comeback in 2013, because the Fed withdrew from quantitative easing in 2013 and began to brew expectations of raising interest rates in 2015. In this rate hike cycle, the U.S. dollar index rose systematically, which directly triggered the return of funds from emerging markets. So what happened to our A shares in 2015 is self-evident. 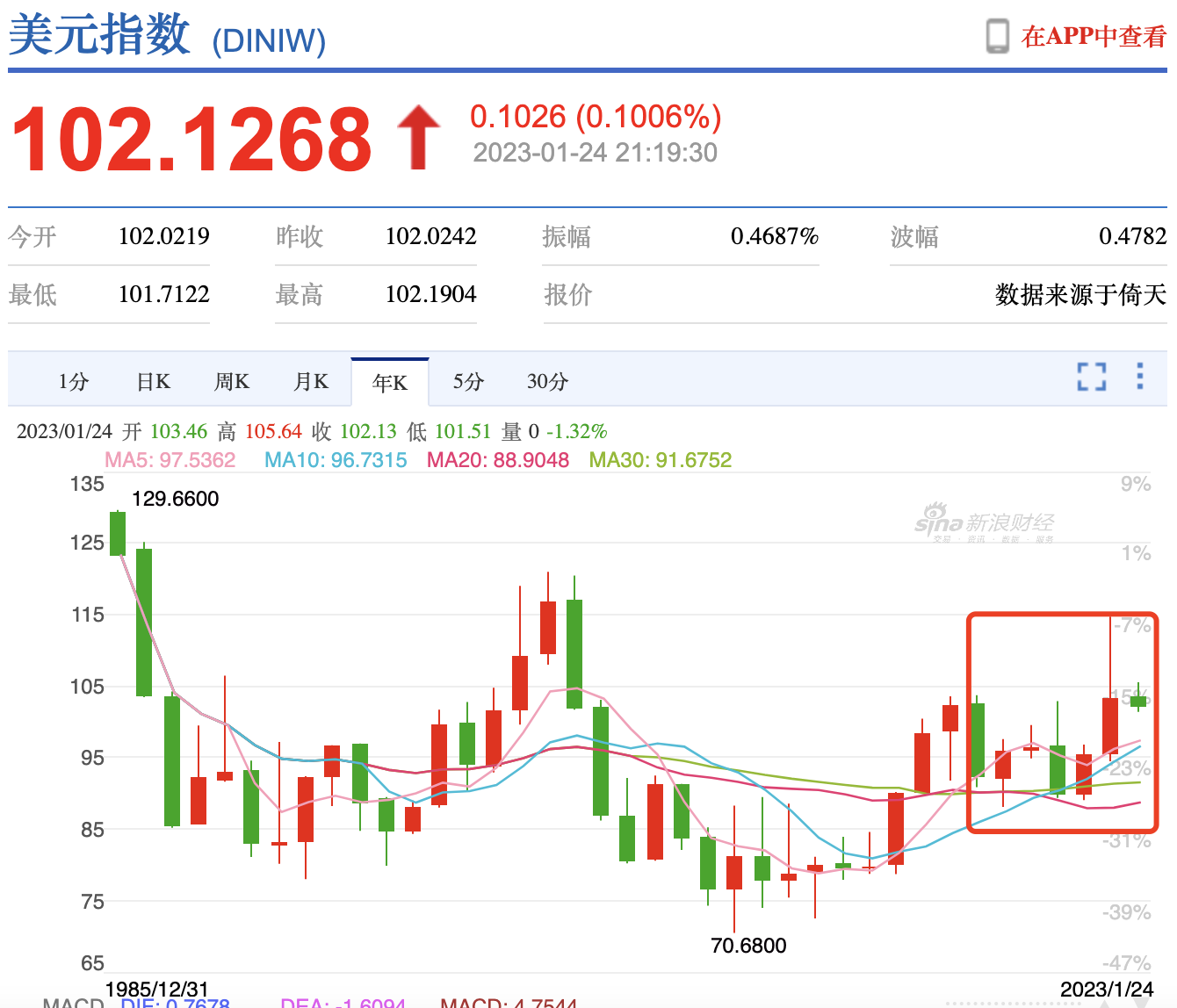 Then the U.S. dollar index from 2017 to 2020, with the end of the interest rate hike and the digestion of interest rate hike expectations, including quantitative easing in 2020, and in 2017, the economy of the euro zone was stronger than that of the United States, so funds flowed back to Europe, making The strengthening of the euro and the weakening of the U.S. dollar have brought about a wave of bull market: Hong Kong stocks have recovered substantially in 2017, and after 2020, they have stepped out of a huge bull market.

But in 2022, with the fastest rate hike in history, the US dollar index strengthened again. In 2022, risk assets performed poorly.

The weakening of the US dollar is nothing more than two reasons. We know from history, one is that the Federal Reserve cut interest rates , and the other is that economies outside the United States are stronger than the United States . Globalization is going very well. Are these two conditions met now?

The second is the strength of non-US economies relative to the US economy, which mainly depends on the strength of recovery in Europe and China. At present, the market consensus is that the euro zone will benefit from a warmer winter, and the imagined energy crisis will not appear. Therefore, the recovery of the euro zone will be faster than that of the United States. At the same time, China’s economic recovery is also expected by the market.

So in the eyes of the market now, the US dollar index has conditions for a sharp weakening, that is, interest rate cuts in the second half of the year and the recovery of non-US economies is faster than that of the United States, but can these two conditions come true? Whether the inflation in the United States will be repeated and whether the economic recovery will come as scheduled are the biggest uncertainties. Therefore, the US dollar index is a bright light guiding us to invest in any asset.

There are 9 discussions on this topic in Xueqiu, click to view.
Snowball is an investor social network where smart investors are all here.
Click to download Xueqiu mobile client http://xueqiu.com/xz ]]>