It has no twists and turns, no funny jokes, and some even don’t even have a picture. It only relies on the earphones to hear the faint sound of cicadas and the rustling of the tip of the pen rubbing against the paper-that is to simulate the environmental white noise of the college entrance examination room.

This is a new feature that white noise video has gradually developed-in recent years, there have been more and more “outrageous” white noise.


In most people’s impressions, white noise is tightly bound to sleep aid, which is very scientific.

In scientific language, white noise is an acoustic signal with the same power in all frequency bands. It belongs to a type of random noise, that is, a random noise that sounds uniform and unobtrusive. Because of its randomness and meaninglessness, the brain doesn’t start thinking because of it, plus it can cover up other real noises, so it does help with sleep.

On the basis of this principle, the first white noise machine specially designed to play white noise came into being in 1962 and became the “sleep saving artifact” in the slogan. Later, because the research found that the sleep aid effect of white noise is particularly effective for newborns (but there are also disadvantages), so most of the white noise machines on the market today are aimed at assisting newborn sleep as a selling point. 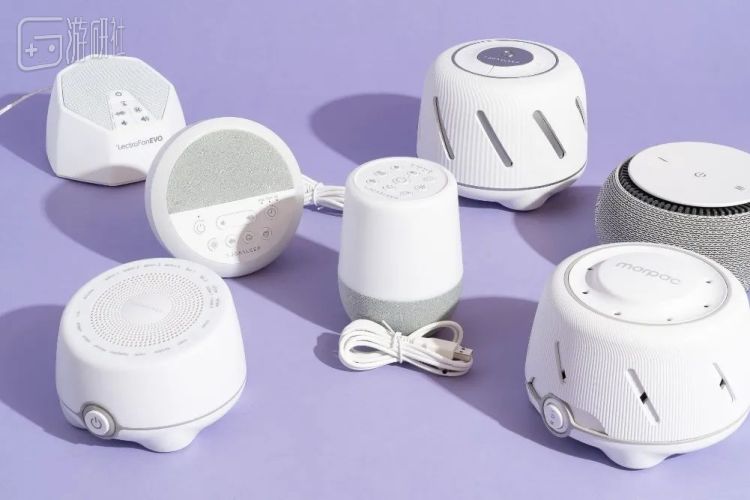 It’s just that in addition to ordinary white noise, most of the sounds it stores are similar to white noise in nature, such as wind, rain, waterfalls, etc., and some may be closer to pink noise with slightly different frequencies in the spectrum. Strictly speaking, these ambient sounds are only the simulation of dialogue and pink noise, but under the convention, white noise has become synonymous with this type of ambient sound, which has continued into the Internet age.

With the gradual popularization of network audio and video, the single-function white noise machine is quickly replaced with little hindrance. In addition to the function of a speaker, the resource types and quantity of online white noise videos and audio libraries are far more than those of white noise machines. If you want to change a sound environment temporarily, you only need to search for a few corresponding words. What’s more, insomniacs no longer need to pull out their wallets for a restful night’s sleep.

There are many white noise videos with more than 100 million views on Youtube, and there are also many UP masters who specialize in ambient audio and video. Many people may not understand why these videos are so good, but these thunder, rain and bonfires, and the low-pitched and long beeping of fans, blowers or vacuum cleaners for hours, have really accompanied the difficult nights after lying down. 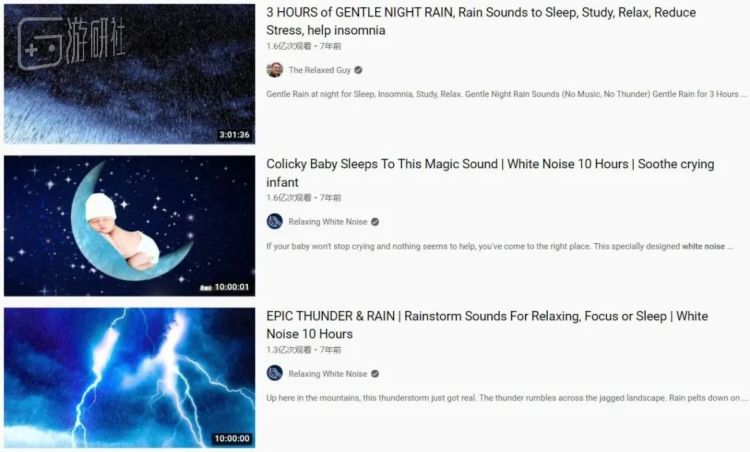 From the very beginning, white noise videos have been functionally debuted, and until now, they are also a dream guide for many people. However, because many of these sounds are not strictly white noise for sleep aids, it has gradually developed some other uses.

A channel titled “lofi hip hop radio – beats to relax/study to” on Youtube has accumulated tens of thousands of hours of live broadcasts and hundreds of millions of views, and is famous for playing soothing low-fidelity music 24 hours a day.

Maybe you haven’t listened to its songs on this channel, but you have most likely seen its pictures, a hand-painted little girl wearing headphones, sitting by the window and doing her homework. Soothing music can make people relax and improve their concentration. This can also be done with white noise videos. Naturally, there will be “learning” ambient sounds.

Some of these videos barely belong to the category of white noise, using the sound of flipping books and rain to simulate a study room environment. Others simply take a few hours of empty mirrors of the real library, full of rustling speeches, light tapping on the keyboard, or the collision of desks, chairs and benches. , but the truth is better, creating an immersive learning environment for audiences with “poor self-control”. 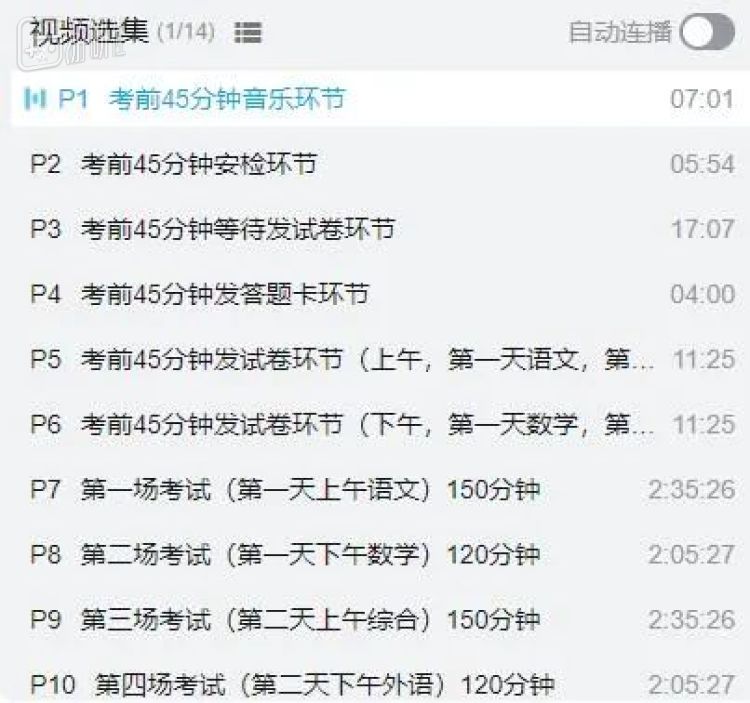 Similar to the environmental sound of the college entrance examination, there is also the simulation of the driving test process, which also has the effect of simulating the atmosphere of the scene and confirming the process; cafes where there are always people talking in English are often used as BGM, in order to achieve training language purpose.

So far, white noise videos no longer simply pursue relaxation, but simulate a special environment in order to maximize the sense of substitution and adapt to a certain environment in advance. In order to restore the real scene as much as possible, viewers often put forward revision opinions in the comment area. In addition to some obvious play tricks, some of them will also be adopted and optimized by the UP master.

But I don’t know if it’s because the audience’s suggestions are gradually outrageous, or because the video authors who are relatively Buddhist are also beginning to seek influence, and their topic selection gradually begins to deviate from the usual track, moving further and further in the direction of no spectrum.

If I talk about the yaw of the white noise video at the beginning, as an ordinary viewer, I can barely understand it: I think that there is no atmosphere in one’s work, and it is reasonable to put an ambient sound to pretend that Hannibal or Lenin is sitting next to him; I want to be in a safe environment. Pursuing some external stimulation, being in a battlefield surrounded by helicopters, or experiencing a thunderstorm is not so difficult to be persuaded. 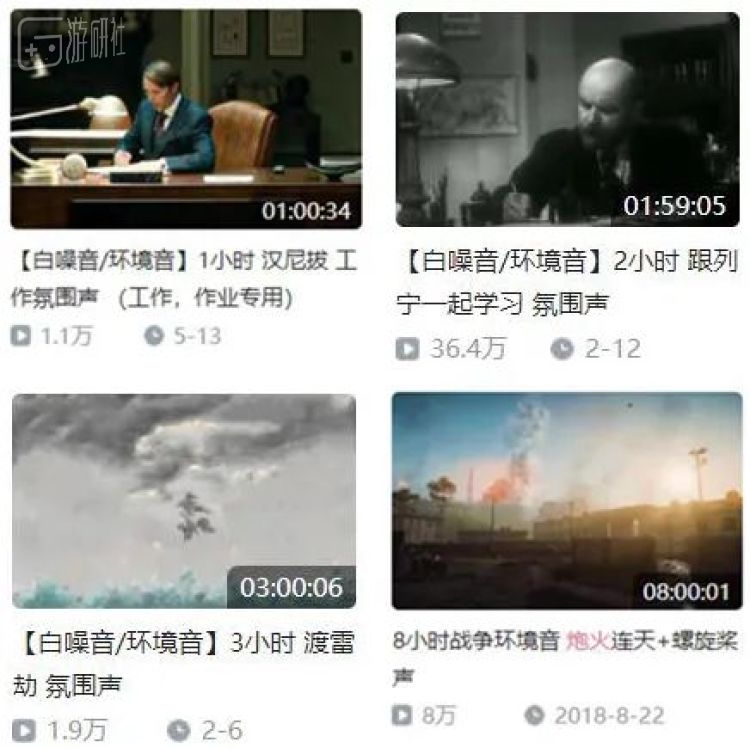 Well, the amazing experience of spending the night in the fridge, other than listening to the near-white noise of the compressor, I can’t really think of what this weird scene would do. And reliving a full hour of bad memories of a neighbor’s renovation, and there seems to be no better explanation than simmering anger.

But at least the scenes in the video at this stage are still as realistic as possible. In the next step, these UP masters with clear brains will begin to take the audience to the sky into the sea, and even chaotically enter famous scenes in various fantasy and science fiction works.

At this time, the audience can already go to sleep in the space capsule that has lost contact with the earth, go to the wrecked ship that sank into the dark sea to start self-study, or travel back to the duty room of the Soviet Union and listen to the Russian radio to start a new day. Fishing for life.

And in the world of literary works, listen to the big-nosed horned dragons crossing the river in “Jurassic World”, to sit in the office of Lieutenant Josh in “Blade Runner 2049”, and even in “Game of Thrones” There’s nothing wrong with listening to the wind outside Winterfell, which is not invaded by the White Walkers, but even in the realm of white noise video, the weirdest is always next.

The sticky tentacles churning, the bubbling whispers of ancient gods, or the howling zombies in Resident Evil gnawing at the door panels, I can still convince myself to barely keep up with the author’s train of thought. But in a video of “Doraemon”, I realized that I couldn’t imagine what kind of light bulb it was to light up the creative motivation of taking a bath with Shizuka.

But it’s just as weird as it can be. The production of such videos is not technically simple, in addition to the threshold of inspiration.

The traditional white noise can get good results with a microphone and a pestle under the eaves of the rain. Faced with these unrealistic sounds, the author’s workflow has been stretched into a series of tasks such as analyzing iconic sound effects, finding alternatives and post-synthesis, which is time-consuming and laborious.

If you are not a professional ambient sound producer, it is difficult to persist in such a thankless task for a long time, but fortunately they also have a cost-effective material library that is not difficult to find – video games.

There is no need to master complex technologies such as “traceless voice removal” or professional AI usage, call out the game settings, turn off the background music, and the character controlled by the player is a perfect microphone. Open games of different themes, go to levels of different styles, find a safe place to hang there, and you can easily record hours of different types of scene ambient sounds.

For some reason, many of the popular white noise videos with the theme of “besieged by zombies”, like the previous “Raccoon City Study Room”, are also based on various zombie-themed games.

Of course, there are many materials harvested in this way that fit the definition of traditional white noise very well. Examples include rafting on the Nile in Assassin’s Creed: Origins, the reeds blown by the wind in Ghost of Tsushima, the singing of the grass in Breath of the Wild, and the echoes of the mountains of Kyle Morhan in The Witcher 3. .

The importance of these sounds in shaping the environment in the game is self-evident. In addition to making people relax, they can easily bring players back to the corresponding scene. Therefore, when many games are promoted, they will also release the ambient sound in the game in advance, so that players can feel the atmosphere of the game scene in advance, such as the new game “Hogwarts Legacy” of Harry Potter IP.

But there is also the suspicion of water video

And on the road of getting more and more weird, the material library of games is also a surprise.

Not long ago, when “The Ring of Eldon” was the most popular, many white noise UP masters also launched the theme of the old man’s ring. Most of these videos are either sad or grand, but the most popular among them is the ambient sound of the famous scenic spot in the game, Windmill Village: a group of skinned old ladies singing and dancing on the grass, their hearty laughter lingering in the ears. In 1 hour, it finally attracted more than 200,000 people to watch.

Coincidentally, in the “Dark Souls 3” series in the hands of the same author, a “relaxation, atmosphere, ambient sound” video titled “The Breathing Sound of Sewage Centipede” is the most popular. 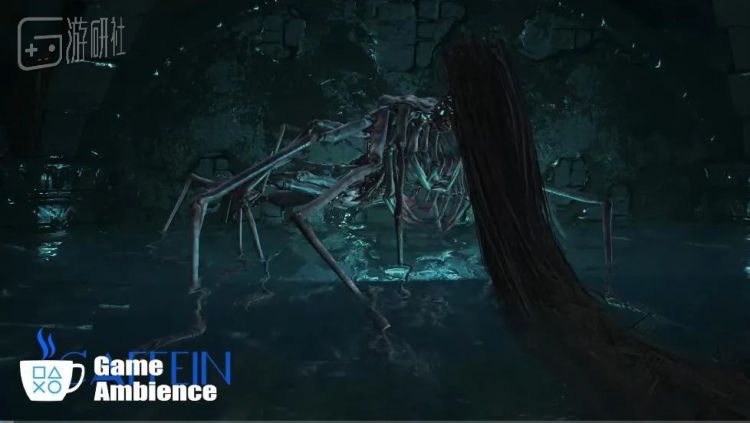 This makes me wonder whether the game ambient sound is the treasure house of the king or Pandora’s box for the author of white noise. Or as the next comment on this video says, it’s actually my problem.

But on second thought, such worries are actually unnecessary. Hobbies are inherently free. Some people can sleep with zombies on their pillows, and some people can solve problems while surviving tribulations. Before white noise videos appeared, the older generation could listen to boring TV programs to sleep, and we could also watch long videos that are familiar to UP masters. It’s the same reason, and no one defines its form.

What’s more, this kind of video is no longer a mere tool, but also a creative form that can carry hot spots and memes. No matter how weird the picture is, it can attract people to take another look. If you hear something you haven’t heard before, it’s no problem to say “It’s weird, listen again”.

After all, from the very beginning, the generalized white noise video has long been out of its specs on the spectrum. With its outrageousness, it has become what it is today.

This article is reprinted from: https://www.yystv.cn/p/9236
This site is for inclusion only, and the copyright belongs to the original author.