The development of new energy vehicles in China has been going on for more than ten years. From the simple and crude “oil-to-electricity” exploration in the early years, it has now become the absolute carrier of intelligent driving, intelligent cockpit and other sub-tracks. WM Motor has contributed a lot to represent the “Four Little Dragons”, a new force in car manufacturing. In the past two years, new energy vehicles have become a force that cannot be ignored in the field of forward-looking technology, fueled by the new forces attacking intelligent technology. Due to this, in the “2021 China’s Top 500 New Economy Enterprises” list jointly announced by the China Enterprise Evaluation Association and Tsinghua University, Weilai, Xiaopeng, Ideal and Weimar entered the list again after the first time last year. .

It is worth mentioning that the theme of this year’s list is “New Main Body of Scientific and Technological Innovation”. In other words, all companies that can make it to the list are leaders in technological innovation in their respective fields. From this point of view, the collective listing of the “Four Little Dragons”, a new car-making force, fully demonstrates the recognition of China Enterprise Evaluation Association and Tsinghua University for its scientific and technological strength and advanced intelligence. 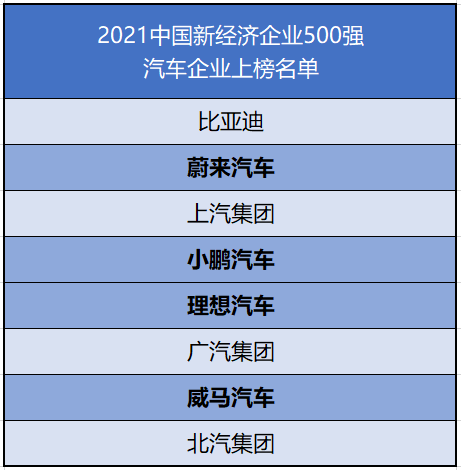 So, why can “Weixiao Liwei” lead the wave of intelligent technology on the new car track? This problem cannot be summed up in one word, but the author can intuitively perceive the comprehensive technological leadership of “Wei Xiaoliwei” based on the technical analysis of the three major intelligent fields of intelligent new energy vehicles.

First of all, in the field of intelligent driving, it is recognized by the industry that lidar has become a future outlet. Many OEMs are recruiting at full speed, creating sub-brands and intelligent driving departments to overcome the lidar route. However, the current “Weixiao Liwei” has completely entered the era of lidar, and lidar models such as Xiaopeng P5 and Weilai ET7 have been mass-produced and launched for several months. At the same time, “Weixiao Liwei” also presents a trend of multiple solutions for lidar. Take the flagship car M7 of Weimar as an example. It is equipped with 3 Sagitar Juchuang M1 radars, with a horizontal viewing angle range of 330°. The power is still a traditional power, and there is no similar competition at the same level. 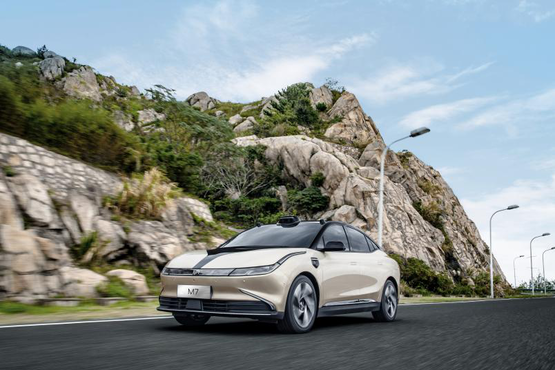 Of course, multiple lidar technology solutions also mean higher computing power requirements to support the organic integration of huge 3D scanning data and 2D image data. In this regard, the NVIDIA Orin chip with a single computing power of 254TOPS has become the best choice. Even NIO and Weimar use up to 4 Orin chips, bringing the total computing power to 1,016TOPS, which is difficult for other OEMs in the short and medium term. The “computing power ceiling” that can be reached. 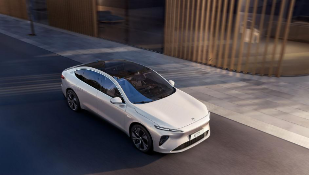 Under the strategy of “multiple lidar solutions + super computing power”, the intelligent driving products and research and development progress of “Weixiao Liwei” are leading the industry. For example, Xiaopeng NGP crossed the stage of the intercity expressway scene and took the lead in opening the internal testing stage of complex urban roads. He Xiaopeng personally experienced and liked it. At present, there is no similar technology competing product in traditional forces that has reached this stage. 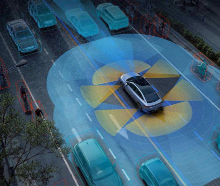 How to “feed” lidar and super computing power? “Wei Xiaoliwei” has the optimal solution

“Weixiao Liwei” is unparalleled in its intelligent driving style, which uses a large number of lidars and multiple high-computing chips. Because the development of intelligent driving technology is not a simple accumulation of numbers, whether it is lidar or ultra-high computing power chips, high-level environments are required to perform effectively. Otherwise, any OEM can simply and crudely purchase hardware for stacking operations. From a technical point of view, the reason why this style of play of “Wei Xiaoliwei” cannot be followed up by other new forces and traditional forces in the short and medium term is that it has built an advanced domain-centralized electronic and electrical architecture for this style of play. (EEA).

EEA (Electrical/Electronic Architecture) is not a new concept. Early EEA refers to the distributed architecture of the control unit developed and designed by specific functions, that is, “hardware functions belong to hardware, software functions belong to software”, a single instruction only corresponds to a single function, so the requirements for communication speed are very low, and the bandwidth is not high. . However, the development of intelligent driving has high requirements on multiple components under the software and hardware system, sensor data transmission, and command execution speed. To put it simply, without the guarantee of communication speed, piling up ultra-high computing power and high-end sensor hardware will only become a burden, making intelligent driving a danger.

So far, “Wei Xiaoliwei” has its own mature domain centralized EEA. Weilai NP2, Xiaopeng X-EEA3.0, Ideal LEEA3.0 and Weimar EEA4.0 all lead the industry, and the communication speed has reached Gigabit Ethernet has become the communication guarantee for the development of technologies such as intelligent driving.

It is worth mentioning that the products of the same level of other OEMs have not yet reached such a high level. Take the Volkswagen ID series, which is fully engaged in new energy, as an example. Although its architecture has been upgraded from MQB distributed EEA to MEB three functional domains EEA, its concentration and communication speed still lag behind “Wei Xiaoliwei”.

Not only the communication rate is improved, but the domain-centralized EEA helps “Weixiaoliwei” realize the decoupling of cockpit software and hardware

The benefits brought by the gigabit Ethernet communication rate based on domain centralized EEA are not limited to the field of intelligent driving. Only 3 years ago, limited by distributed EEA, SOTA (software upgrade) was not standard for mainstream models in the market. However, in the past two years, the newly launched models of “Weixiao Liwei” have made the more advanced FOTA (complete vehicle upgrade) standard, and FOTA’s requirements for communication speed are much higher than SOTA. This allows “Wei Xiaoliwei” to launch high-end intelligent driving products at a faster speed. Take Xiaopeng and WM Motor, which focus on automatic parking technology, as examples. They have successively introduced two automatic parking functions, VPA-L and PAVP, through FOTA technology. VPA-L can realize automatic parking and storage of cross-floor memory parking spaces under the condition of people. PAVP goes a step further and can complete cross-layer cruise parking without learning by relying on high-precision maps when there is no one in the car. Looking at the traditional power camp, in the field of automatic parking technology route, there is no technology of the same level launched so far. 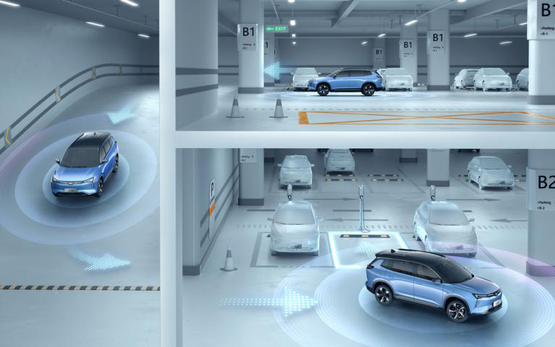 The advantages of domain-centralized EEA are not limited to ultra-high communication rates. As mentioned above, under the domain-centralized EEA, software and hardware are no longer isolated data islands that do not communicate with each other, and are fully decoupled and integrated. This means that “Weixiao Liwei” can boldly develop and realize a wide variety of complex intelligent functions across software and hardware, and further open up the “Pandora’s Box” of automotive intelligent imagination and potential.

For example, Weimar, as early as April 2021, achieved the industry’s first SOA (Service Oriented Architecture, service-oriented architecture) technology product by launching W6 as early as April 2021, which means that Weimar’s creation of smart cockpits is completely based on SOA logic. Through SOA model development, WM Motor W6 smart cockpit realizes the free combination of software and hardware function modules with ultra-high degree of freedom. It is reported that every WM Motor W6 owner can become a LEGO MOC player in the cockpit. Like building blocks, he can design over 400 cockpit functions on the mobile phone as a service, and generate programmed instructions with one click, such as music playback in the software domain. And the opening skylight of the hardware domain can be achieved at the same time, which was unimaginable in the past. To this day, except for WM Motor, no OEM has implemented SOA-related technology products, which shows that the new forces are ahead of their time in intelligence. 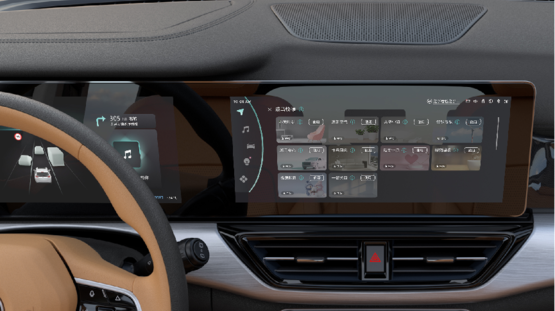 To sum up, the new forces represented by Weilai, Xiaopeng, Ideal and Weimar, their technological forces and intelligent attributes not only lead the new forces in an all-round way, but also have many leading positions in the new energy vehicle industry. This re-entry into the list can be described as well-deserved. The author also believes that under the leadership of “Wei Xiaoliwei”, more new forces will join the list in the future and become an important force in China’s new economic construction.

This article is reproduced from: http://www.guokr.com/article/461896/
This site is for inclusion only, and the copyright belongs to the original author.