In the early morning of April 20th, as the dust of the new version conference of “World of Warcraft” settled, version 10.0 was officially determined as “Dragon Age”. This is the story of the five-colored dragons told again by Warcraft since the 4.0 Cataclysm version. With the disclosure of the content of the new expansion, the NGA Forum set off a heated discussion. However, the most popular of them is not a story discussion post about the dragon, but a “prophecy post” published in September 2017. 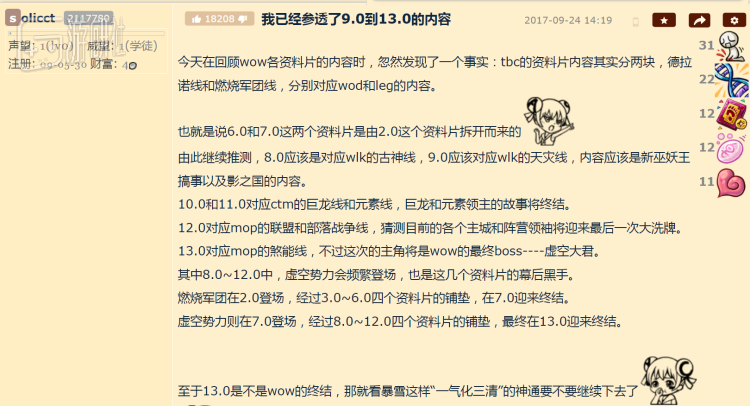 The whole picture of God stickers, you can see the “give kneeling” gifts sent by many people

After the post was published, because the landlord’s reasoning was meticulous, the words were meaningful, and there was evidence of the current version, it caused a lot of discussion at the time. The popularity of the entire post lasted for about two months and slowly declined until November 25, 2017, after the last post was over, the post gradually sank into many water posts. 2017 is the 7.0 “Legion” version, and there is still some time before the 8.0 content is released. If there is no accident, this will be an ordinary member of the countless “prophecy stickers” in World of Warcraft for more than ten years, and it will not make any waves.

However, the accident still came.

At the beginning of July 2019, the 8.2 dungeon “Eternal Palace” was launched. The cutscenes at the end of the dungeon strongly suggested that the mastermind behind the entire 8.0 version was N’Zoth, one of the four ancient gods, which perfectly corresponds to the “Ancient God” in the prophecy post. line” content. Even though Patch 8.0 was titled “Battle for Azeroth”, the Old Gods only appeared in the final minor patch as “the mastermind behind the scenes”. But someone still dug up the post nearly 2 years ago and caused a new wave of discussion. Reply to the post after a year and a half

This wave of discussion has not yet passed. On November 2 of the same year, BlizzCon was held, and the content of version 9.0 was officially released, named “Shadow Country” – exactly the same as the prophecy in the post!

In the original post, “9.0 should correspond to the natural disaster line of wlk, and the content should be the content of the new Lich King and the Kingdom of Shadows.” It was perfectly reflected in the Blizzard 9.0 promotional video. Immediately, countless players flooded into this post, expressing their admiration. Some worshipped, some suspected that the host was written by Blizzard, some asked for lottery numbers, and some even asked for marriage. Countless people admired the landlord’s miraculous brain hole and accurate predictions, and at the same time left their own footprints, and said that “we will see again in three years” and “wait for the 10.0 dragon prediction”.

Worship the gods on site

The time comes to 2022. With the end of the 9.2 Tail King’s first kill, more and more players have begun to shift their focus to the discussion of the content of the new version 10.0. After entering April, a lot of “insider” news came out. Some are the information found by cracking the source code of the official website, and some are the suspected new version of the game concept map uploaded by the player – all kinds of information show that the 10.0 version is the theme of the dragon!

In an instant, this post was topped on the homepage again, and everyone expressed their admiration for the “God of Transmigrators” in the post. 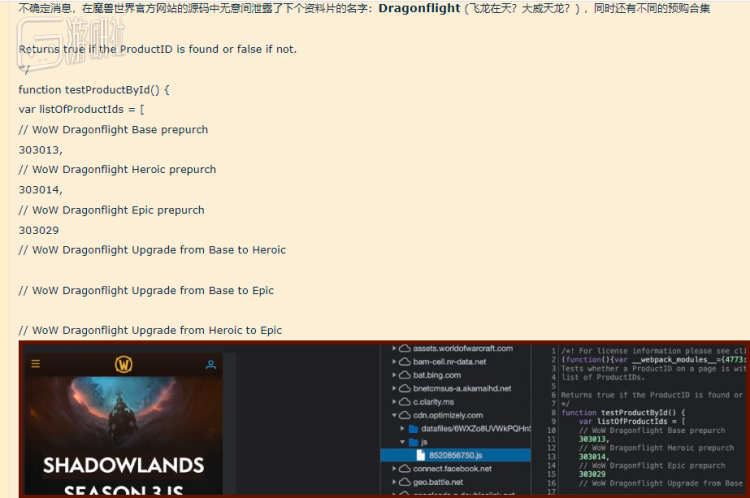 Screenshots of overseas “uncle party” leaked, you can clearly see the dragon element

But at the same time, some people have questioned. After all, in the history of Warcraft, there have been many “uncle parties” who sneaked away in advance, but very few can really predict the content of the new version. Every time a new version is released, it is always accompanied by rumors and rumors. If Blizzard does not hold a press conference for a day, the “Dragon Version” will not be settled for a day. Players leave messages in the post and look forward to the upcoming game. release of the new version.

Finally, at 0:00 on April 20th, the conference of the new version of World of Warcraft was held as scheduled. All the answers are revealed, the new version is officially named “Dragon Age”, 4 new maps of “Dragon Islands” are added, and regular game content such as new levels and new occupations are also added.

Crazy players are flooding into the post again to leave comments, and new comments pop up almost every few minutes! Up to now, this god post has received 13,000+ replies, which is the tallest building in NGA except for the battle report post! And this mysterious solicct boss, with his impressive record of accurately predicting the content of three major versions of the game in a row, became the first person to predict the NGA version! 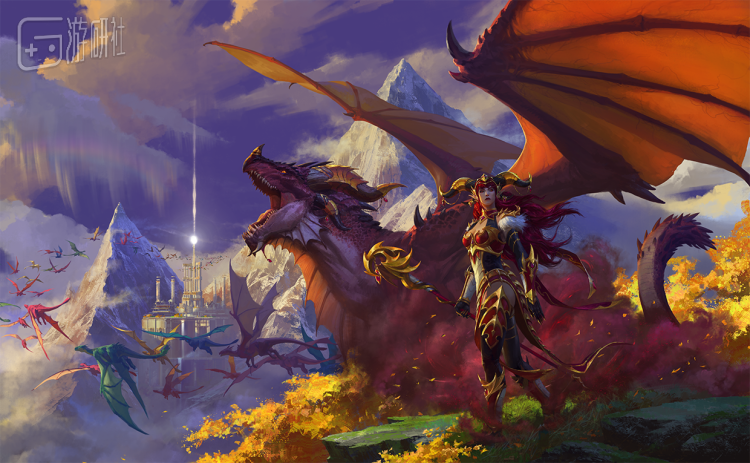 If the success of one prediction is a fluke, and the success of two predictions is luck, then the three versions of the game content are accurately predicted in a row, and we have reason to believe that this boss joked in the prophecy post as the version of “one gasification and three cleanliness”. The development logic does make sense. In other words, it is very likely that the Blizzard Warcraft development team really has such a “roadmap”, and the designers are telling the story of the future of World of Warcraft in the way of “splitting the content of the old version”.

So the question is, why does Blizzard use this “split” method to continue the Warcraft story? Wouldn’t it be better to continue writing a whole new story? In fact, the reason is very simple, because the production speed of new content in World of Warcraft has long been unable to keep up with the consumption speed caused by the frequent changes of the game version. Blizzard did this, which is really a helpless move under the pressure of new version development.

As can be seen from the above figure, Warcraft updates a major version every 2 years on average, and these major versions will be divided into 2-4 minor versions. The average cycle for each minor release is between 8-12 months. But whether it is 8 months or 2 years, it may be a bit long in terms of game time, but it is too short and too short in terms of plot laying and heroic character shaping. It is said that the content of the 60-80 version is classic and the plot is full, because the World of Warcraft at that time has the historical accumulation of the Warcraft trilogy for nearly ten years. Those high-profile characters—Illidan, Kael’thas, Lich King Arthas, etc., all had a strong plot appearance in the previous works of Warcraft. When these popular characters continue their stories in World of Warcraft, they will naturally arouse players’ interest in the game.

No amount of historical content will eventually be consumed. Starting from 5.0 Mists of Pandaren, Blizzard has tried to create the plot and characters of World of Warcraft itself. In all fairness, the Mogu, Mantid, Thor, Sha Neng and other characters in the Mists of Pandaria version are well-created and fully support the plot of the entire big version. However, due to the lack of historical accumulation and the lack of close linkage with the old world, version 5.0 finally looks more like a “biography” of Warcraft than an orthodox plot. So Blizzard went back to the old way again and began to further consume the original heroes in the history of Warcraft. The ultimate action of this move is the return of the 7.0 Legion.

As the finale of the 2.0 Burning Legion line, the number of heroes played in the Legion version is second only to the 60 version and the 2.0 Burning Crusade. The dungeon BOSS alone includes the fallen incarnations of Gul’dan, Illidan, Sargeras, Kil’jaeden, Aggramar, Argus and many other heavyweight heroes and even fallen titans appeared. The time span is also full of 2 years and 4 minor versions. The frequent appearances of popular characters and the epic plot of the Legion storyline also made the Legion version an unprecedented success. Not only the number of people online has recovered, but the version score has scored the second highest score in history at 7.5 points, second only to Wrath of the Lich King’s 7.9 points.

However, this overdraft of game content eventually led to bad results. In the subsequent 8.0 and 9.0 versions, due to the consumption of a large number of hero characters, the subsequent plots were exhausted. Especially in Battle for Azeroth 8.0, players complained as: “I just took the Star Destroyer to expedition to Argus to destroy the Burning Legion. Why did the Tribal Alliance drive the catapult to fight each other again?” The collapse of the plot also It is directly reflected in the number of people online and the ratings. Currently, the ratings of 8.0 and 9.0 on the website are the second to last and the first to the last, even surpassing the previously recognized “worst version in history” 6.0 King of Draenor.

This article is reproduced from: https://www.yystv.cn/p/9031
This site is for inclusion only, and the copyright belongs to the original author.