In August 2021, Lantu’s first car, Lantu FREE, was officially delivered. After a four-month buffer, in December 2021, the sales of Lantu FREE skyrocketed, with 3,330 units delivered, a year-on-year increase of 236%, rushing to the sales rankings. Since then, Lantu Automobile has been named in the “New Forces”.

After launching the first SUV, Lantu Automobile did not enter the sedan market like other new forces, but turned its attention to the relatively small MPV. This decision seems to have deep meaning.

So what about Lantu’s MPV fineness geometry?

On the evening of May 7, the “electric luxury flagship MPV” Lantu Dreamer was officially launched. The seven-seat version is priced from 369,900 yuan to 439,900 yuan, and the private customized version is priced from 639,900 yuan. It will start in the third quarter of 2022. The delivery has been started one after another. At present, the car has been opened for reservation on the Lantu Auto APP. 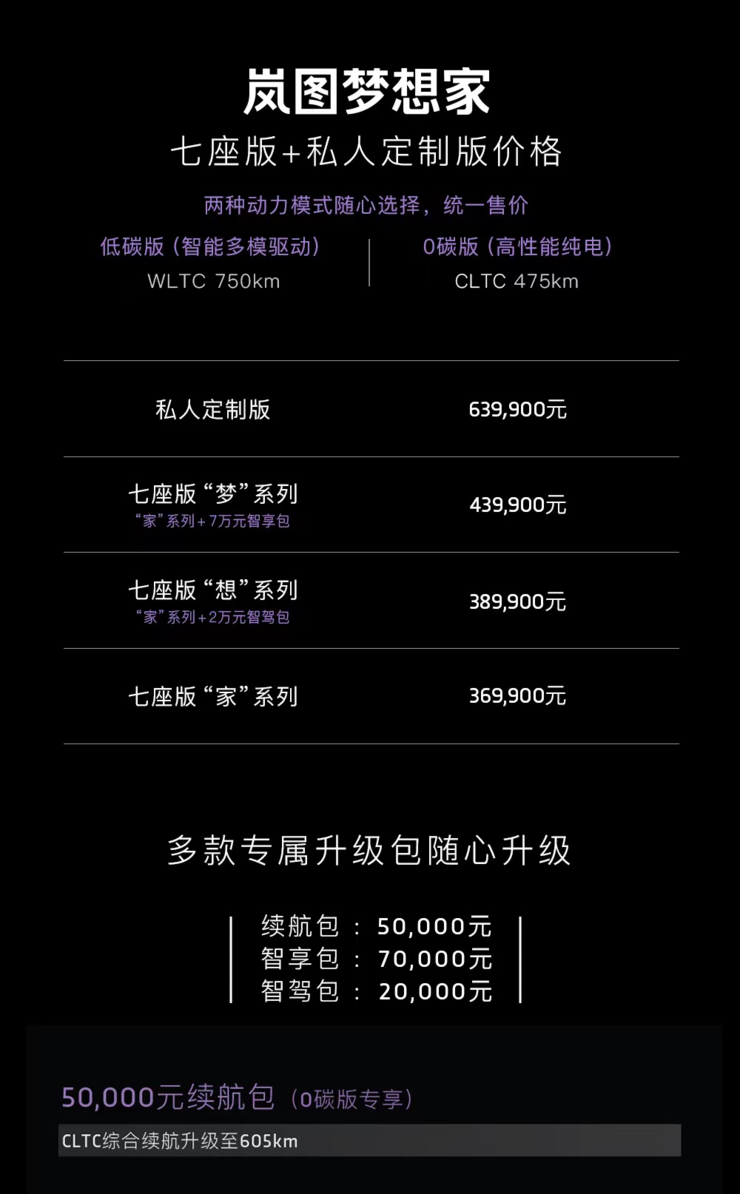 It is understood that the Lantu Dreamer is equipped with a new generation of power system “Lanhai Power”, which is currently the only dual-power technology platform that supports high-performance pure electric and intelligent multi-mode power systems.

According to the press conference, Lantu Dreamer has 17 first-ever MPV technologies and 21 leading technologies at the same level.

In terms of comfort, Lantu Dreamer has a wheelbase of 3200mm, and comes standard with double-sided electric sliding doors. It has a 2+2+3 seven-seat layout. It has a large interior space and can easily load four 24-inch luggage with a full load of 7 people. box, so that members of the rear can also stretch. The car is also equipped with zero-gravity comfortable seats, three-zone intelligent air conditioning, pure air management and Dynaudio audio system, which greatly guarantees comfort.

In terms of the most important safety performance, the whole car of Lantu Dreamer adopts over 70% high-strength steel, and uses the world’s first 2000Mpa one-piece thermoforming laser tailor-welded door ring and 2000Mpa aluminum-silicon coated door anti-collision beam. According to the press conference, its strength has exceeded that of the landing gear that is extremely stressed on the aircraft.

In terms of battery safety, Lantu Dreamer adopts a full-scene battery safety protection system, and is the first to create a 1500MPa thermoformed high-strength steel battery pack bottom guard. In addition, Lantu Dreamer is also equipped with active safety technologies such as fatigue driving monitoring and night vision system to ensure the safety of users.

In addition, the private customized version is more luxurious. This version is equipped with an independent intelligent control armrest screen, a flagship car refrigerator, a hidden lift TV, a liftable speaker, an air conditioning control panel, etc., and an exclusive logo door pillar trim and rear solid wood are added. floor and can be co-created with the user. Meet the user’s personalized car needs.

In the five months of last year, the total sales volume of Lantu was 6,434 vehicles, with an average of 1,286 vehicles per month. After the outbreak in December, the sales of Lantu automobiles have returned to calm since the beginning of this year.

From January to March, Lantu FREE delivered 1,553 vehicles, 740 vehicles and 1,385 vehicles respectively. The average sales volume for the three months was 1,226 vehicles, which was still lower than last year. Although the influence of multiple factors such as the epidemic since the beginning of this year cannot be ruled out, Lantu obviously did not hand over a qualified answer sheet in the SUV market. In the MPV market, can Lantu Dreamers really help Lantu realize its dream?

According to the data from the Passenger Federation, there were 32 MPV companies registered in the first quarter of this year, which wholesaled 204,000 vehicles, a year-on-year decrease of 7.8%. Meanwhile, sales of sedans and SUVs rose by 8.4% and 10.4% year-on-year, respectively.

The domestic MPV market has been declining steadily since its peak sales of 2.467 million units in 2016, and there is no more myth. According to public data, the cumulative sales of MPVs in 2021 are 1.055 million units, less than half of the sales in 2016. At the same time, the penetration rate of MPV in the narrow passenger car market is only 5.0%

Although there is no sign of recovery in sales data, it seems that more and more car companies are deploying MPVs.

Looking back at 2016, when the MPV market broke out, China’s auto market grew rapidly and the national second-child policy was fully liberalized. In 2021, the national “three-child policy” was officially introduced.

Not only is the “three-child policy” first, but in recent years, the consumption power of the middle class has also been continuously improved, and people’s willingness to purchase has been greatly enhanced. The MPV market seems to be a blue ocean about to explode.

However, there are also voices of opposition. Although there are policies ahead, the willingness of young people to have children continues to decline. According to the data, the MPV market still belongs to the marginal zone.

Whether MPV models will become the next trend in the industry is still inconclusive, but it is a fact that mid-to-high-end MPVs are becoming more and more popular among consumers. Judging from the wholesale data from January to March this year, Buick GL8 has surpassed Hongguang to top the list. The aforementioned car companies with MPV layouts are also making efforts in the mid-to-high end. The Passenger Federation also said: “The rapid growth in sales of high-end/large MPVs has driven the healthy development of MPVs.”

It is against this background that Lantu launched its second model into the mid-to-high-end MPV market when the first model had yet to gain a firm foothold.

At the press conference, Lu Fang, CEO and CTO of Lantu Auto, said: “Since the pre-sale started on April 7, Lantu Dreamer has received more than 4,000 orders.”

Only one month after the pre-sale, the number of orders has exceeded the total sales volume of Lantu FREE in the first three months of this year. Lantu Dreamer has already made a perfect start in the mid-to-high-end MPV market.

So can this “electric luxury flagship MPV” carry the banner of Lantu’s sales? We’ll get a glimpse after the third-quarter delivery.

This article is reproduced from: https://www.leiphone.com/category/transportation/KuGsJMkANWorvvvN.html
This site is for inclusion only, and the copyright belongs to the original author.