In January 2021, the Asia-Europe route and the trans-Pacific route accounted for 38.1% of the total global container capacity, or 9.24 million TEU. 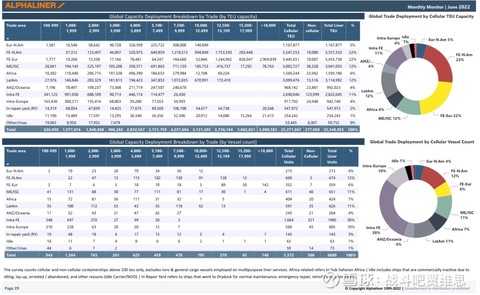 The first picture and the content of Roger’s article show that: Compared with January last year, in January 2022, the capacity of the US line will increase by 1.3 million TEU, an increase of 31%. largest single market.

It should be noted that in January 2022, U.S. imports from Asia were only 6% higher than in January 2021. This is very interesting. Logically speaking, the freight capacity increased by 31%, and the cargo volume only increased by 6%. The capacity is much higher than the cargo volume. Isn’t this a script that everyone is familiar with in the past few years? The market price should plummet, right? However, although the freight rate of the US line has fluctuated and fell a few years ago, it is far from the point of collapse, and the overall freight rate is still at a high level? Then it is only possible that the increasing congestion of US terminals at the time absorbed or offset the increased capacity. This should not be difficult to understand: because the ship was stuck in the west of the United States and could not go back, in order to maintain the weekly ship service, the ship owner had to put more ships. Nominally speaking, the capacity has increased, but from the actual weekly capacity, the effective capacity has not increased significantly. The excess capacity was wasted waiting on the coastline of the western United States. Although there is no exact figure to show how much wasted capacity, the normal guess should be between 15%-25%, which can explain why the freight rate increased by 31% at the beginning of the year and the cargo volume increased by only 6%. At that time, it was still able to stand firm and not fall sharply. 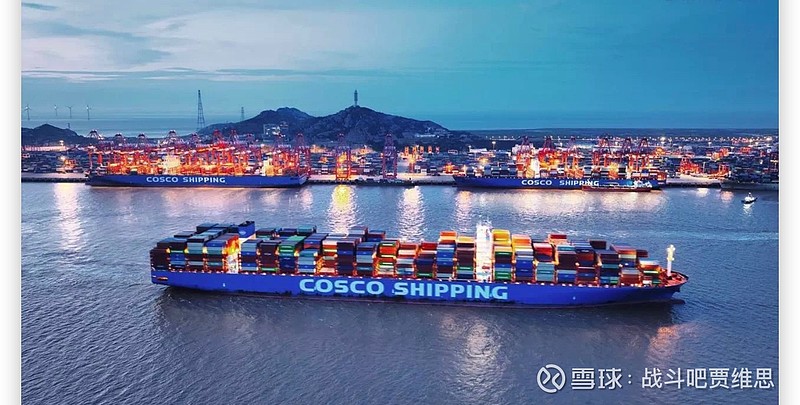 So why is this period of time falling endlessly, as if there is no end? I try to say something:

1. Demand side: After reaching its peak at the beginning of this year, the price of container shipping began to fluctuate and fluctuate. Especially due to the combined effects of high inflation rates in Europe and the United States, geopolitical conflicts in some regions, and the continued spread of the epidemic, the global shipping market demand has shrunk slightly. Consumption in Europe and the United States has been transformed, and at the same time, it is still in the channel of raising interest rates. On the one hand, consumption has returned to services; on the other hand, food and oil prices have risen dramatically, and low- and middle-income households have been forced to adjust their consumption, while consumption of non-essential goods has declined. Although the growth rate of the global shipping market has declined in the first half of this year, the overall container shipping trade volume is still at a relatively high level in the market. However, since entering the third quarter, inflationary pressures in Europe and the United States and other countries have continued to increase, resulting in a substantial decline in their market demand. In addition, the large amount of inventory accumulated by importers has yet to be digested, and many importers have to reduce or even cancel commodity orders. This has led to a decline in the volume of goods in the peak season of the global market. (The progress of subsequent inventory digestion remains to be seen)

2. Capacity supply: Calculated based on the data reported by Alphaliner in June 2022

The increase in capacity on the US line is in stark contrast to the reduction in capacity on other routes. The largest reduction in capacity was on the Asia line, down 11% from the same period last year. As the global epidemic is gradually brought under control, the capacity turnover efficiency has gradually improved, and the overall available capacity of the market has increased, and the eastward movement of goods from the US line to the west has actually effectively alleviated the congestion of the western US ports and released a part of the effective capacity. It is also considered that the global effective capacity has released a total of about 3.8%, or 984,400 TEU.

To sum up, the European and American routes have increased the above-mentioned capacity, and at the same time, the demand has not increased but has a slight downward trend.

3. In fact, the west-eastward movement of the US line has caused a significant drop in the volume of US-Western cargo. The Port of Los Angeles reported a total throughput of 805,672 20-foot equivalent containers in August, a year-on-year decrease of 15.5% (year-on-year). Imports were 404,313 TEUs, exports were 100,484 TEUs, and vacated TEUs were 300,875 TEUs. Imports fell sharply, down 16.8% year-on-year and 16.7% compared to July. In the same period, however, the transportation capacity has increased significantly, which has greatly exceeded the demand and caused the supply and demand to be in an extremely unbalanced state. At the same time, it also created a domino effect of falling freight rates in the global shipping market.

5. This round of shipping prices continued to fall. In a sense, it was also a periodic correction of last year’s “abnormally high” shipping prices, which was conducive to bringing the soaring shipping rates back to a relatively reasonable price level. That is to say, the current moderate decline in international shipping prices is reasonable, but the continued plummeting or even a cliff-like decline is not conducive to the healthy development of the entire shipping market. Although the proportion of shipping costs in the entire foreign trade cost is not the highest, the drastic fluctuations in freight costs will inevitably be transmitted to the global foreign trade market, which will then affect the smooth operation of the entire global foreign trade industry chain and supply chain. (Currently, the global shipping volume accounts for more than 90% of the total trade volume, and container shipping, as one of the most important shipping methods, accounts for more than 80% of the seaborne trade value, which has a huge impact on global trade.)

6. With the continuous cooling and “normalization” of freight rates in the spot market of container shipping, more and more news shows that the new shipping companies of the US line cannot bear the pressure of high rent (because the rent cannot be paid in advance on time, there is a risk The event of the East SFL’s withdrawal under the charter party). However, in the process of “normalization” of the container shipping market, an increasingly polarized phenomenon will inevitably appear again in the container shipping market: the leading shipping companies are developing more and more steadily and sustainably; New entrants to the spot market must make painful choices when considering costs and benefits. The current “substantial” drop in rents and spot market freight rates does not imply a free-fall collapse of the container shipping market, as it did in 2009. On the contrary, rent and spot market freight have fallen from extreme highs, and “normalization” is inevitable, which is conducive to the stability of the global foreign trade supply chain and the sustainable development of the industry. 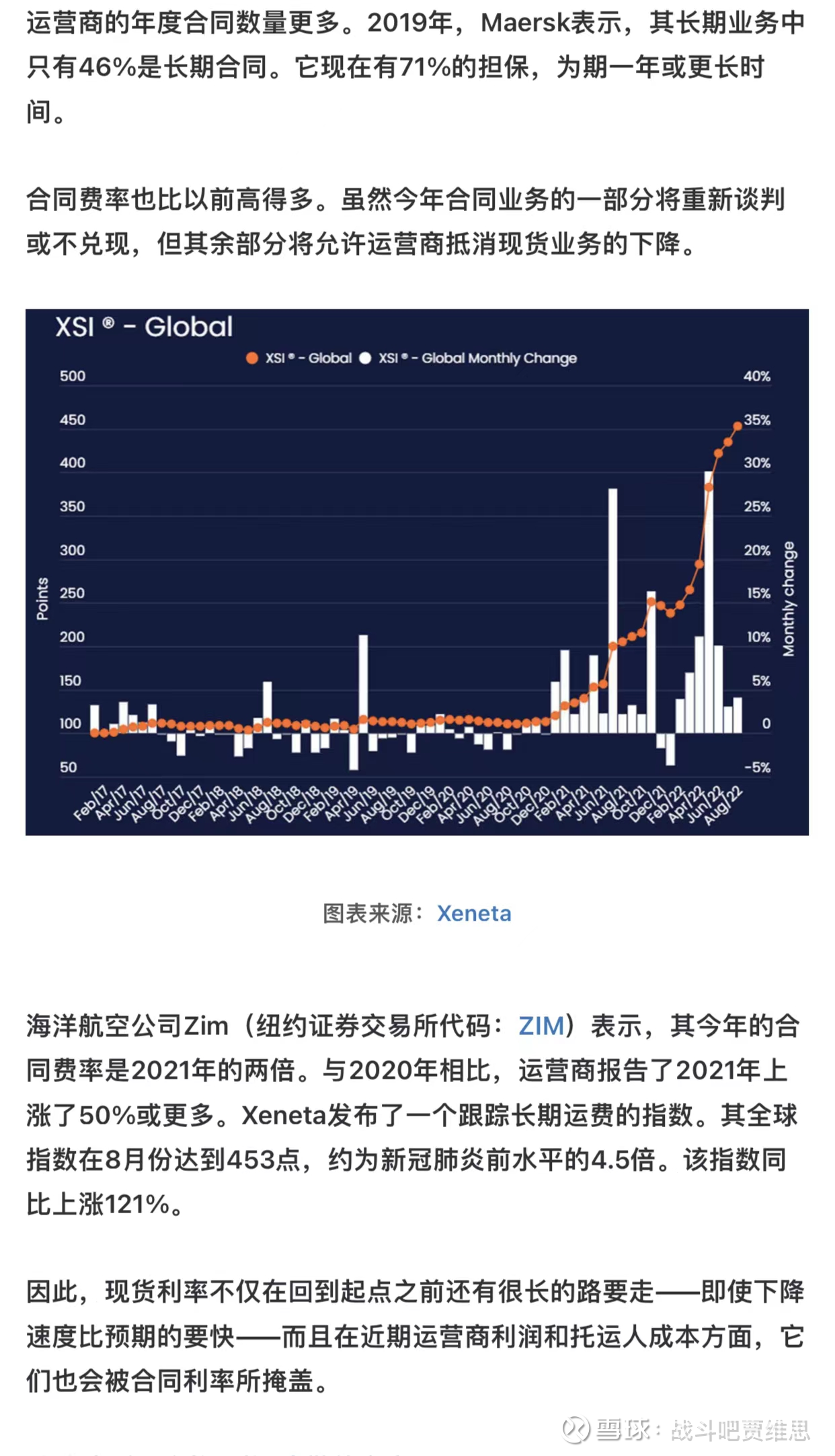 At present, the shipping companies in the industry have not adopted the means of suspending shipping to stabilize the freight rate, so why have the three major alliances not taken aggressive suspending measures?

Data published by Allianz (the world’s largest insurance and asset management company) shows that in 2022, the revenue of the container shipping company industry will increase by +19% year-on-year, and its operating cash flow will increase by +8% year-on-year. While freight rates have fallen by -32% so far this year, they are still well above their pre-pandemic averages ($6,400/FEU vs. $1,450/FEU), and we expect them to remain in the second half of 2022 and even throughout 2023 Above the historical average ($1,450/FEU), it will average $7,350/FEU throughout 2022 and $4,550/FEU in 2023. Freight rates are likely to remain high in 2023, given the delayed delivery of new vessels into the second half of 2023, the implementation of new IMO regulations in 2023, the impact of strikes at European ports, continued shortages of truckers in Europe and the United States, and rising fuel, container and vessel prices ($4,550/FEU). Higher-than-expected cash flow capabilities will help shipping companies comply with new ESG standards (+61% YoY investment growth in 2021). In addition, total debt fell by -5% yoy in 2021, and we expect shipping companies to deleverage further in 2022 and 2023 (-16% and -11% yoy, respectively), which will be critical for rising interest rates. However, despite the increase in capital expenditure (capex), shipping capacity will not grow as fast as expected. The recent investment efforts of shipping companies, while huge, are not in line with the capabilities of the industry (+274% average increase in operating cash in 2021), and the increase in capex is mainly due to the doubling of new ship prices last year, not because of new Orders and capacity will increase even more. Also, while 35% of orders should be delivered in 2023 and 39% in 2024, these vessels may only modernize the fleet (in compliance with energy efficiency and carbon emissions requirements) rather than fully expand the fleet capacity, as IMO regulations in 2023 will force shipping companies to retire a large number of older ships. In the short term, freight rates will not return to pre-pandemic levels. We should also keep in mind that on average nearly 60% of the fleet currently in use globally is leased and 40% owned, so we can expect shipping companies to take advantage of this ratio in order to keep capacity and prices at levels that allow them to remain relatively higher profit levels. 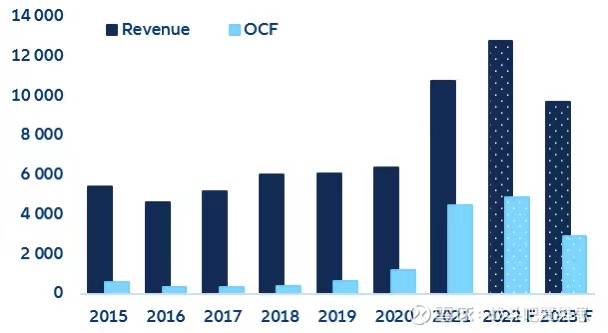