On August 2, according to Reuters, four people familiar with the matter revealed that the United States is considering restricting the export of American chip manufacturing equipment to China. According to the plan under study, the United States will ban the export of equipment used to manufacture NAND Flash flash memory chips with more than 128 layers of stacking to China, and the export restrictions include Changjiang Storage Technology Co., Ltd. and other memory chip manufacturers in mainland China factories, such as South Korea Storage Chip giants Samsung Electronics and SK Hynix.

It is reported that Samsung has two large factories in China, while SK Hynix is ​​acquiring Intel’s NAND flash memory chip manufacturing business in China.

That is, once the U.S. restriction plan is approved, the restrictions will be expanded to include a ban on shipments of U.S. chip-making equipment to NAND Flash factories in mainland China.

As soon as the ban is issued, the Yangtze River storage may be severely restricted

Although the relevant plan is currently under discussion and there is no bill drafting process, the U.S. Department of Commerce has made it clear that the U.S. government’s focus on the plan is to weaken China’s ability to manufacture advanced semiconductors.

Experts on export control said that the plan will be the first time that the United States has adopted export control to target China to produce memory chips that do not have special military uses. It is intended to prevent the development of China’s semiconductor industry and protect American companies.

Data shows that in the NAND flash memory market, the six long-term monopolies, Samsung, Kioxia, Micron, SK Hynix, Western Digital, and Intel, have a global share of more than 95%.

The only two memory chip manufacturers in the United States are Western Digital and Micron Technology, which together account for about a quarter of the global NAND Flas chip market.

Judging from the data previously released by research institutions, Samsung Electronics was the largest supplier in the first and second quarters of last year, with a much higher market share than other manufacturers. Kioxia and SK Hynix were the second and fourth largest suppliers respectively. , while Micron is the fifth largest supplier of NAND flash memory in the world, and Western Digital is the third largest supplier.

Yole’s data shows that China’s global share of NAND chip production has grown from less than 14% in 2019 to more than 23% this year, while U.S. production fell from 2.3% to 1.6% over the same period. For U.S. companies, nearly all of their chip production is done overseas.

In March of this year, Kioxia announced plans to cooperate with Western Digital to jointly build a new NAND Flash production line at its factory in northern Japan. According to people familiar with the matter, the investment in the project may reach about 1 trillion yen (about 52.7 billion yuan), and the two companies plan to discuss details of the joint venture, including the investment ratio. In May of this year, foreign media reported that Western Digital was considering spinning off the NAND Flash business and proposed to invest $1 billion to assist in the sale or spin-off. 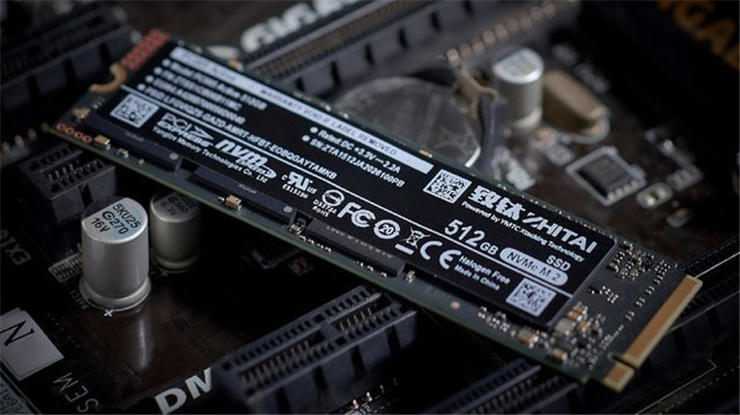 In contrast, although China is the world’s second largest NAND market, the mainland’s self-production rate is almost 0%.

However, as a rising star in China’s NAND Flash flash memory manufacturing field, YMTC has also been making efforts in recent years.

Data from research firm Counterpoint Research shows that when 64-layer NAND flash memory was put into production for the first time in 2019, YMTC’s share of the global flash memory market was 1.3%. It has risen rapidly since then, reaching a market share of 4.8% by 2021.

In June this year, Nikkei reported, citing people familiar with the matter, that YMTC’s second factory in Wuhan would be put into operation as early as the end of this year. The move is expected to further narrow the gap between YMTC and Samsung and Micron in terms of technology and production. If development goes well in 2023 and 2024, there may be a move to more cutting-edge chips such as 196- or 232-layer 3D NAND flash.

In June 2021, according to a U.S. government report, Micron and Western Digital are facing the pressure of low-price competition from YMTC products, and YMTC’s expansion and low-priced products pose a direct threat to Micron and Western Digital. The report emphasizes that, as a leader in the manufacture of NAND Flash memory chips in China, YMTC has also received about US$24 billion in government subsidies.

In 2020, Zheng Jiuli, co-general manager of YMTC in charge of supply chain management, said that more than 80% of YMTC’s equipment came from the United States and Japan. Although some Chinese suppliers have made breakthroughs in areas such as etching, cleaning and coating, domestic alternatives are not enough to replace everything. Zheng Jiuli said long-term investments in innovation and R&D by U.S. and Japanese suppliers have created technological advantages. This is why their products are currently mainstream and difficult to replace.

For the memory chip industry, the more layers a flash memory chip has, the more advanced the chip will be, and the harder it will be to develop and commercialize it.

Therefore, in the future, once the United States prohibits the export of production equipment for the production of NAND Flash flash memory chips with more than 128 layers of stacking to YMTC, YMTC may be trapped because of this, and it will be difficult to develop further in the future.

Since 2019, the United States has continued to include some key semiconductor industry companies on the “entity list.” Entering the Entity List means that the above-mentioned companies are not allowed to conduct any commercial transactions with U.S. companies without permission, including the inability to import raw materials and production equipment from the United States, and the inability to use U.S. R&D results or technologies for production.

So far, the U.S. ban on exports and business exchanges has caused a major setback in the manufacture and supply of Huawei’s self-developed chips. SMIC has also been unable to import extreme ultraviolet (EUV) lithography equipment, making it difficult for it to manufacture processes within 10 nanometers. chip.

Synopsys is also being investigated by the U.S. Department of Commerce for allegedly supplying chip technology to Huawei and SMIC.

In November last year, the official website of the US Department of Commerce added 12 Chinese technology companies/institutions to the Entity List. More than half of these 12 companies/institutions are involved in the semiconductor field. There are a total of 7 companies: New H3C Semiconductor, Xi’an Aerospace Huaxun, Hangzhou Zhongke Micro, Guoke Micro, Suzhou Yunxin Micro, Baoli Asia Pacific and Jiazhao Technology. Among them, except Jiazhao Technology, which is a trading company mainly engaged in the import of equipment and components, the other six companies are chip manufacturers, whose products cover the fields of satellite navigation and positioning chips, memory chips, analog and mixed-signal integrated circuits and communication chips. In addition, the remaining five companies on the list are from the fields of quantum computers, materials, and mining development.

According to a report by Bloomberg on July 30, Lam Research and KLA, two U.S. chip equipment companies, have confirmed that the U.S. crackdown on Chinese chips has expanded from 10 nanometers to 14 nanometers, and the new regulations will affect The scope may not be limited to SMIC, but also include other chip manufacturing companies investing and operating in China, such as TSMC in Taiwan.

Wallace, Klei’s president and chief executive, said the company had received a notice from the U.S. Department of Commerce asking them not to supply China with equipment used in chip manufacturing at 14 nanometers and below.

In the past two weeks or so, all U.S. equipment makers have received letters from the U.S. Commerce Department asking them not to supply China with equipment used to make chips of 14 nanometers or less, according to people familiar with the matter. The statements of Fanlin and Ke Lei are just the first concrete examples that the United States has further suppressed China’s chip industry.

Leifeng.com learned that the United States was persuading Japan, the Netherlands and other countries to ban ASML, Nikon and other related companies from selling mainstream technologies related to chip manufacturing to China.

This article is reprinted from: https://www.leiphone.com/category/industrynews/mSxnAa94vfkYCSwW.html
This site is for inclusion only, and the copyright belongs to the original author.