Apple is finally paying the price for the “butterfly keyboard”.

On July 18, local time, Apple agreed to pay $50 million to settle a class-action lawsuit over the quality of the butterfly keyboard.

After the settlement agreement takes effect, Apple will not only provide free repairs for the faulty butterfly keyboard, but also pay an additional cash compensation to US users, ranging from $50 to $395 depending on the MacBook model. 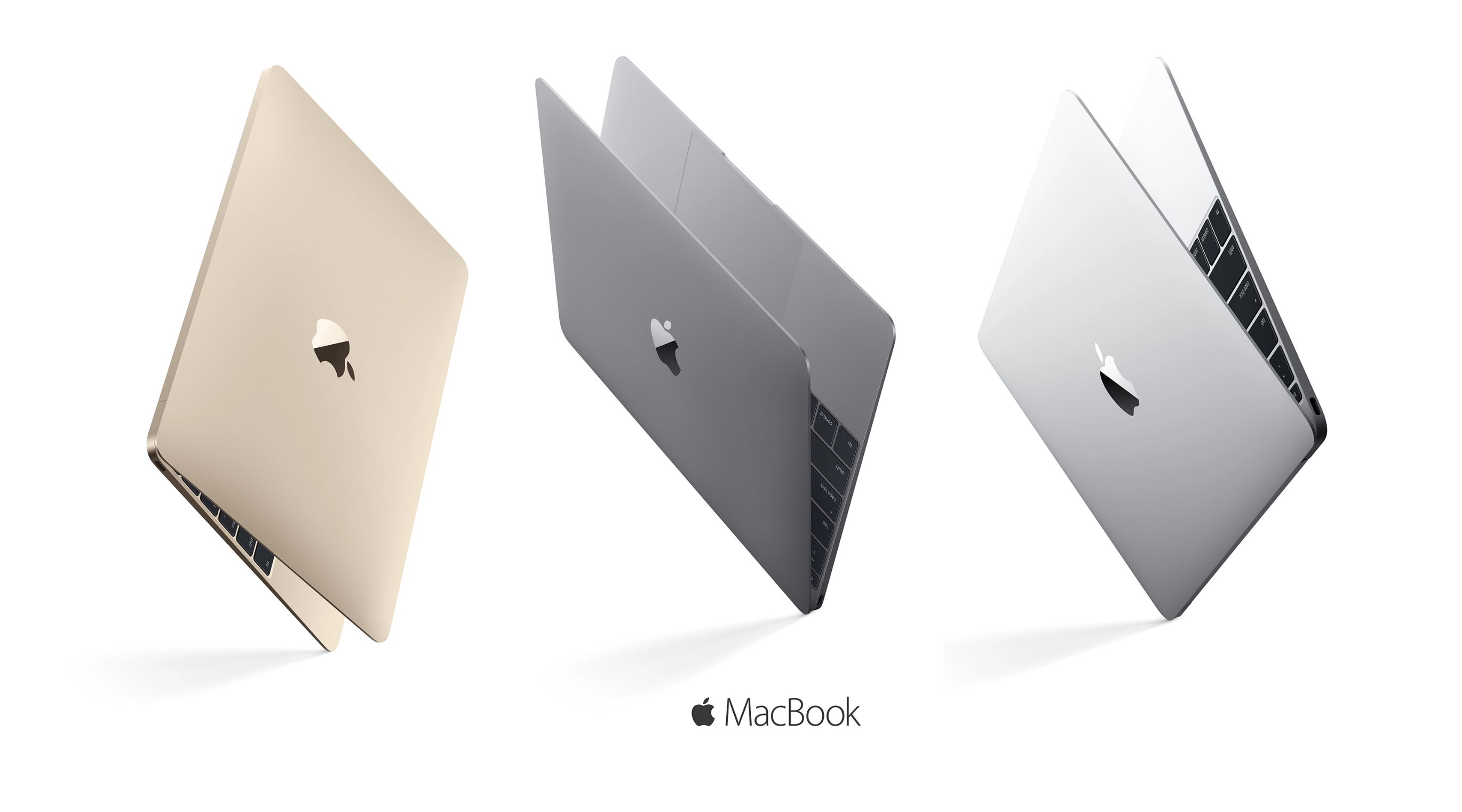 But it quickly had disastrous consequences. Due to the thinner key body, the butterfly keyboard can easily become “sticky” or even get stuck due to dust entering. Apple tried several improvements and finally decided to give up.

In 2015, the butterfly keyboard “with a golden spoon” was born.

At that spring conference, Cook celebrated the grand opening of the Apple Store in West Lake and introduced the progress of a series of software services, but the real protagonist of the conference was the MacBook. “We’re going to reinvent the notebook,” Cook said.

The key step in reinventing the notebook is to reinvent the keyboard. In order to achieve better lightness and thinness, the new MacBook has thinned the screen and made a fuss from the keyboard, and designed a “butterfly keyboard” that is 34% thinner than the previous generation.

Compared with the traditional scissor keyboard, the butterfly keyboard adopts a more complex but more stable trigger structure. The mechanical structure of the upper layer is butterfly-shaped, which is symmetrically raised along the center, so it is more stable. In order to achieve extreme precision, each trigger structure of the butterfly keyboard is independently assembled, and a single LED lamp bead is placed inside to provide backlight. The trigger shrapnel at the bottom is also newly designed and made of stainless steel. 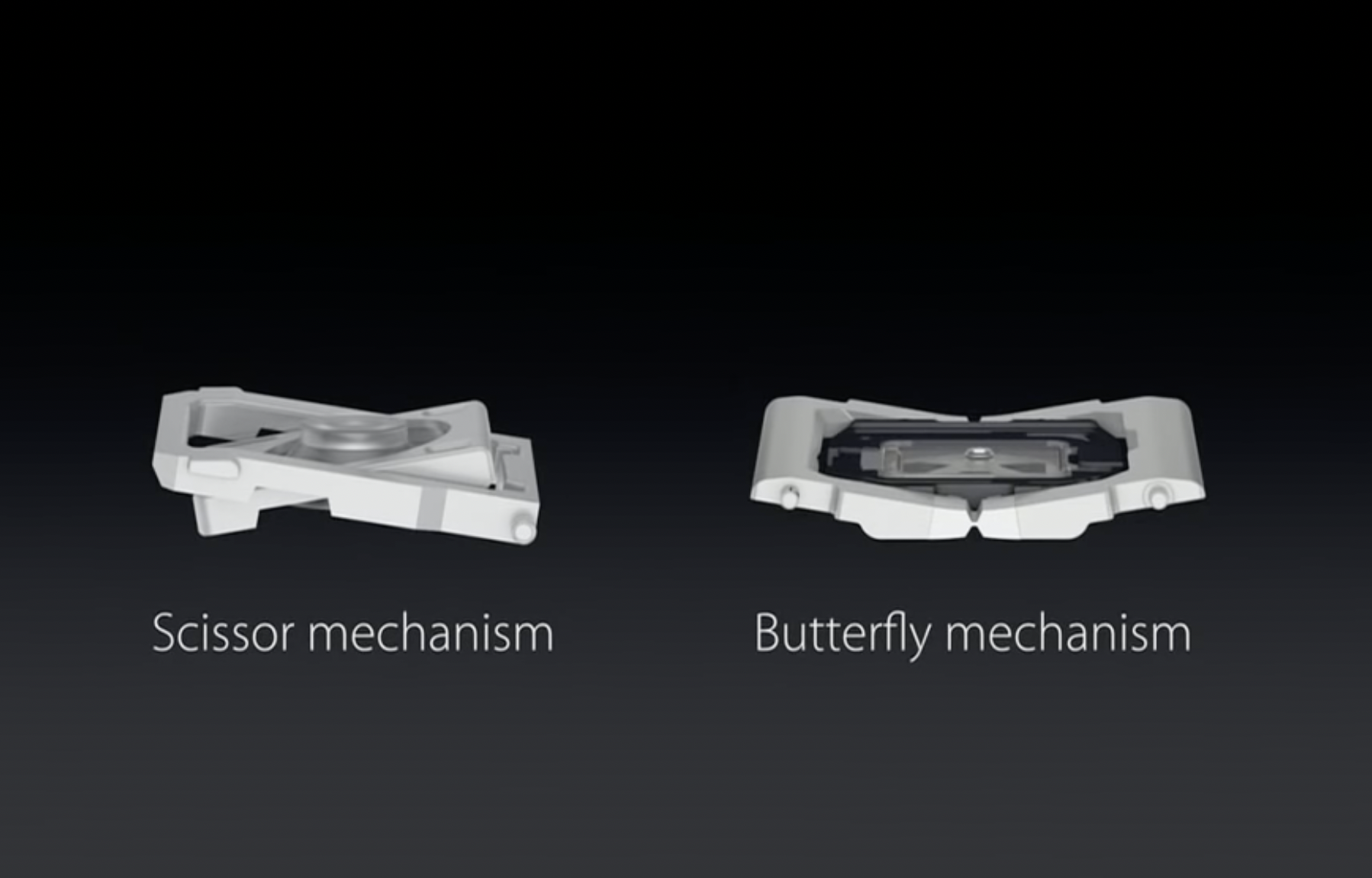 Compared with the traditional scissor structure, the structure of the butterfly keyboard is more complicated and more expensive | Apple

This design is a luxury for a keyboard. Tianfeng International analyst Guo Mingchi later pointed out in the report that the butterfly keyboard has high cost and low yield, and the comprehensive cost is 250% – 350% higher than that of ordinary notebook keyboards.

But everything seems to be worth it. Through the delicate design, the butterfly keyboard can provide enough “trigger feeling” in a very short key travel to ensure that users can input accurately. In the product video, Jony Ive, who is in charge of the design, makes no secret of his pride in the “butterfly keyboard”: it is thinner, more stable, faster and more accurate.

Indeed, many users like the feel of the “butterfly keyboard”. Its extremely short key travel can improve input efficiency, while sufficient stability can give users enough confidence, and the hand feel is also very crisp and clean. Although many people think that its key travel is too short, it is easy to cause finger fatigue, but until the early release, the butterfly keyboard did not cause too much controversy.

In 2016, Apple began rolling out the butterfly keyboard to more new MacBooks, including the new MacBook Pro released that fall. The new MacBook Pro is pretty much a revamp of the MacBook’s design philosophy a year ago: it’s lighter and thinner, with a new keyboard, touchpad, and battery design. 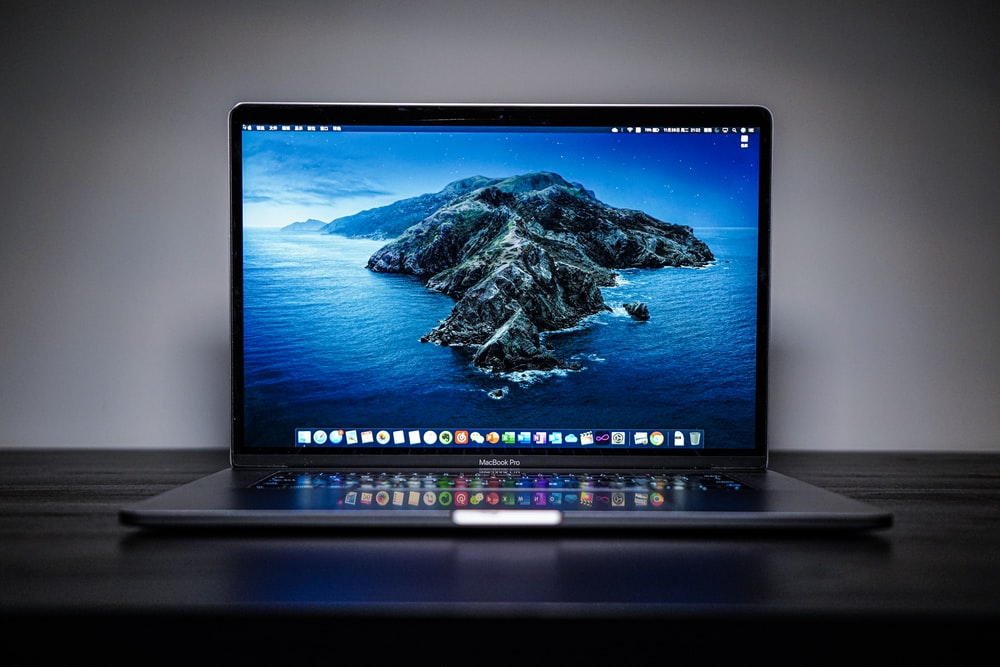 It was around that time that the problems with the butterfly keyboard began to surface, and it gradually developed into a disaster.

Looking back at the problem of the butterfly keyboard, it is not difficult to understand. Simply put, it is too thin, and the gap in the key trigger structure is so small that dust and debris in daily life can “stuck” a key when it falls into it.

The early manifestation of “stuck” is that the keys are no longer stable, and the feel of hitting is no longer crisp and powerful. After that, it will evolve into more and more “sticky”, until finally, it may lead to button failure and accidental touch.

The solution given by Apple in the early days was to let users buy a can of compressed air and “dust” the keyboard by themselves. Many users have found in practice that whether it is spraying or vacuuming, it can indeed improve the dust entry problem of the butterfly keyboard.

But in any case, for most people, the keyboard should not be an “ancestor” that needs to be served .

Apple actually recognized the problem with the butterfly keyboard very early on.

In theory, “extending the key travel” can make the space in the entire key structure larger, and it is relatively less susceptible to dust. However, this increase is still too small, and it still cannot fundamentally solve the problem. Some users even believe that after the second-generation butterfly keyboard has a longer keystroke, it will be easier to bring gray into the gap between the keys. 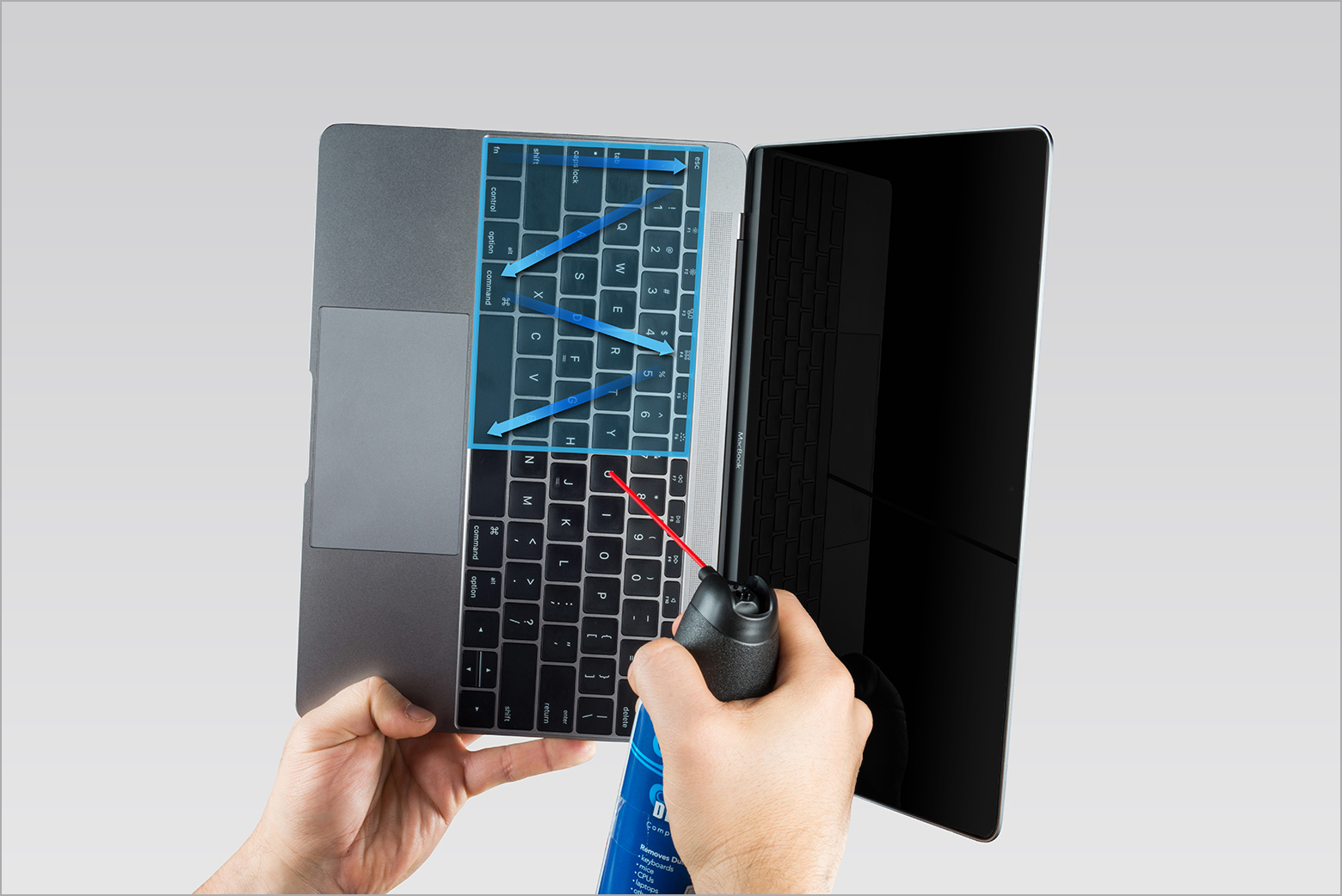 In response to the problem of ash entry, the solution given by Apple in the early days was to spray with a dust removal can | Apple

While Apple was trying everything to improve the butterfly keyboard, as the number of new MacBook users increased and the time stretched, the problem began to ferment violently.

In 2018, Apple Insider found that the butterfly keyboard of the 2016 MacBook Pro had an extremely high failure rate, twice that of the old scissor keyboard. The Wall Street Journal also reported the large-scale failure of the butterfly keyboard, after which Apple came forward, publicly apologized to users, and launched a corresponding repair and replacement program.

Apple hasn’t given up on the butterfly keyboard at this point. In the summer of 2018, Apple launched a new MacBook Pro with a third-generation butterfly keyboard. This time, Apple added a layer of silicone film to each key structure to try to keep dust out of the key body. In the publicity, Apple said that the improvement of the new keyboard is mainly to reduce noise, but the real problem that needs to be solved is the dust. The “Silicone Film” added to the third-generation butterfly keyboard｜ifixit

The attempt to improve the third-generation butterfly keyboard failed again. Adding a “dust film” to the key body does not completely separate the keycap from the key body, which may improve the problem and delay the occurrence of failures. But in the long run, it is still a matter of “solving the symptoms but not the root cause”, and there is always a way for dust to get in.

Half a year later, in the fall of 2019, Apple did use the scissor keyboard on the new MacBook Pro 16-inch and began to abandon the butterfly keyboard.

At the beginning of its release, the butterfly keyboard once aroused the endless imagination of technology enthusiasts. It has a very short keystroke, and when you hit it, it is like hitting on a complete plane, much like a combination of a physical keyboard and a virtual keyboard.

At that time, Apple was vigorously researching the two technologies of “pressure” and “tactile”, and exploring the use of TapTic Engine to simulate physical vibration feedback. The Force Touch touchpad on the MacBook, the Home button that cannot be mechanically moved, and 3D Touch on the iPhone 7 are all achievements of Apple back then.

Many people believe that Apple’s exploration of “pressure” and “touch” ultimately wants to turn the laptop keyboard into an iPad-like screen. The user’s finger taps on the screen , and the screen can sense pressure, accurately input, and provide Similar to the vibration feedback of a mechanical keyboard.

Some people even believe that the ultimate form of the keyboard will not stop at the virtual keyboard on the screen, but will further evolve into an AR keyboard – projected on the desktop by AR glasses, and then recognize finger movements through the camera to achieve input.

These two imaginations are very suitable for the background of technological development at that time. But the gap between ideal and reality is far wider than imagined. Not to mention the full virtual keyboard, even the butterfly keyboard quickly withdrew from the stage of history and lived a life of being rejected at the age of 5.

It’s not just the butterfly keyboard that is despised. A series of designs that Apple had radically explored in 2015-2016 were later abandoned, from Touch Bar, to 3D Touch, to multi-layer terraced lithium batteries… 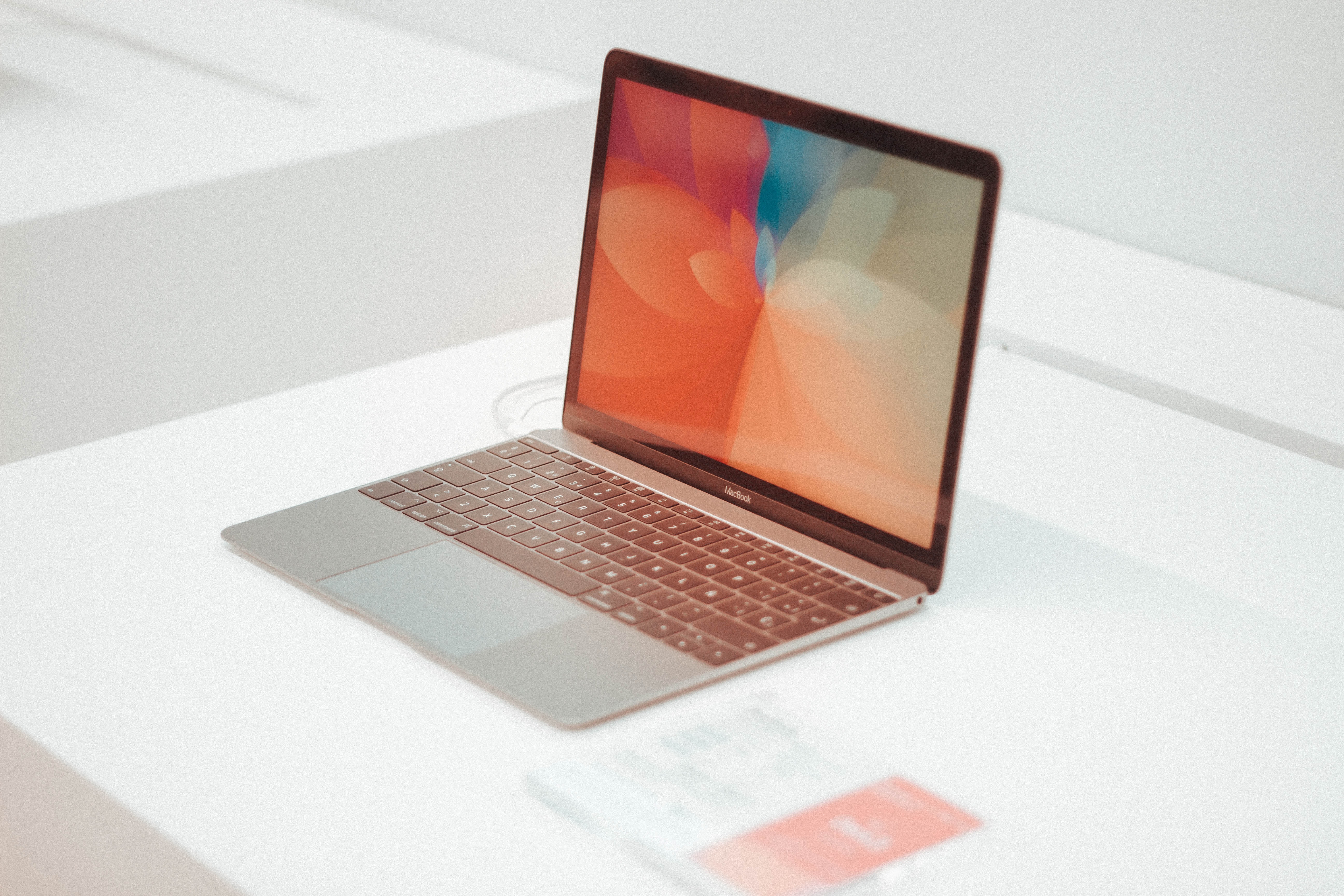 From the early days of its business, Apple has always been a company that emphasizes “form”. Most of the classic Apple products in history, whether they failed or succeeded, were the result of the form leading the technology and moving forward radically.

This is why since the 1990s, Apple’s industrial design team has always had a very high status, shouldering the task of “leading” the entire company.

But obviously, everything is in the past tense. Since Jony Ive announced his departure from Apple in 2019, those radical, cost-independent designs have been corrected again and again, which seems to imply that industrial design has failed to point to the future for Apple. Just last month, Apple completely terminated the consulting partnership with Ive, and finally broke up.

The latest MacBook Pro and Air have changed back to what they were a decade ago. The MacBook Pro has become more like the PowerBook G5 released in 2003, and the MacBook Air is just a thinner Pro.

In the end, the butterfly keyboard left a $50 million “fine” for Apple. But it’s still a radical and meaningful attempt by Apple to move forward into the “future form” of laptops, and it’s a symbol of a time when people took it for granted that technology would always change.

After the settlement was reached, Apple said, “paying compensation does not mean it admits that this (butterfly keyboard) was a mistake.”

This article is reproduced from: https://www.geekpark.net/news/305697
This site is for inclusion only, and the copyright belongs to the original author.