Is it “return to the light”, or has the inflection point come?

It’s time for the once-in-a-season giant turnaround time. This week, Meta, Google and Microsoft released their transcripts one after another.

The results show that under the current downward pressure on the economy, the giants cannot survive alone. Not only did Meta experience a year-on-year decline in revenue for the first time in its history, but even the revenue growth rates of Google and Microsoft, which have always been stable, also hit a two-year low. Most of the main performance indicators of the three companies this time are lower than market expectations, and spending reduction and recruitment slowdown have become the next common strategy of the giants.

Although the result of the collective fall of the giants is somewhat surprising, perhaps the environment of “difficulty in solving problems” has made the market’s expectations for them to a minimum. Therefore, there was no bad grade, and the Fed raised interest rates by 75 basis points as expected. Instead, today’s technology stocks rose against the trend, and the Nasdaq 100 index even violently rose by more than 4.2%.

So, how did the three technology giants perform this time, and what are their respective performance expectations for the next quarter?

｜Meta, a confused future: revenue fell for the first time year-on-year, and Metaverse business did not improve

After Snap, which was the first to debut, handed over an ugly financial report and plummeted by nearly 30%, all the companies that depended on advertising for their food were “tear-sold” by investors, and Meta, a big social media advertising player, was naturally the first to bear the brunt.

It is worth noting that this is also the first quarterly revenue decline for Meta since its inception in 2004. 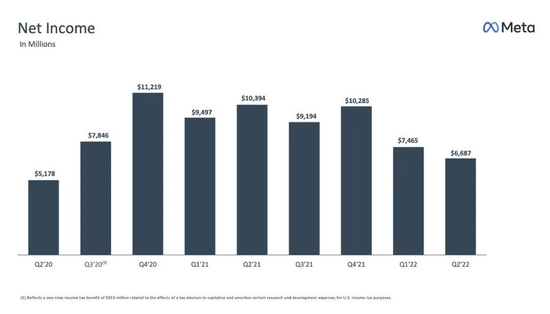 The picture is taken from Meta’s second quarter financial report

In terms of users, Meta has not stepped out of the quagmire of growth. Daily active users (DAU) were 1.97 billion, up 3%, while monthly active users were 2.93 billion, up just 1%. The decline in user activity also directly affects the level of Meta advertising revenue. Although the number of ad impressions on each platform has increased by 15%, the average price of a single ad has dropped by 14%.

Remember, in the first two quarters, Reality Labs’ revenue was $877 million and $695 million, respectively. That is to say, not only did the Metaverse business not improve this quarter, but revenue fell sharply, and the loss was still as high as 2.8 billion US dollars. 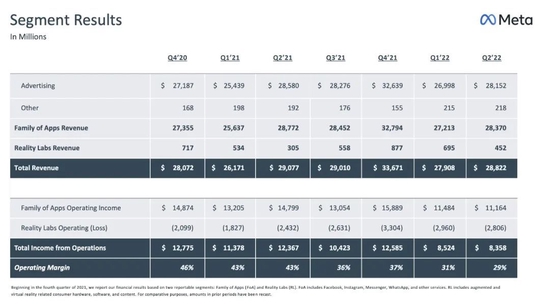 The picture is taken from Meta’s second quarter financial report

In addition to the second-quarter indicators that fell short of expectations, Meta’s outlook for the next performance also revealed troubling signals.

First, Meta issued guidance for the next quarter that was well below market expectations. The company said sales for the quarter would be between $26 billion and $28.5 billion, compared with analysts’ average estimate of $30.5 billion, meaning Meta’s revenue next quarter will be down 10% from a year earlier. above. As for Reality Labs’ business, Meta said its next quarter revenue will be even lower than the second quarter’s level.

Additionally, Meta embarked on an apparent “frugal diet” campaign. Meta said Meta lowered its full-year spending forecast to between $85 billion and $87 billion from a previous forecast of $87 billion to $92 billion. Although its number of employees has increased by 32% over the same period last year, Zuckerberg also made it clear at the earnings conference that “it will reduce headcount growth next year” and that “many teams will be downsized so that they can shift their energies within the company. other important areas.”

After the earnings report, Meta’s shares rose 6.4% from the trading session and fell more than 4% after the market.

Google, which is also a big advertising player like Meta, although this time also handed over a bad financial report, but because the most critical advertising business did not collapse, it rose against the trend.

It is worth noting that Google’s revenue growth rate has dropped significantly this time, from 62% in the same period last year to only 13%. This quarter is also the first time in the past two years that Google’s key financial indicators have missed market expectations for two consecutive quarters. 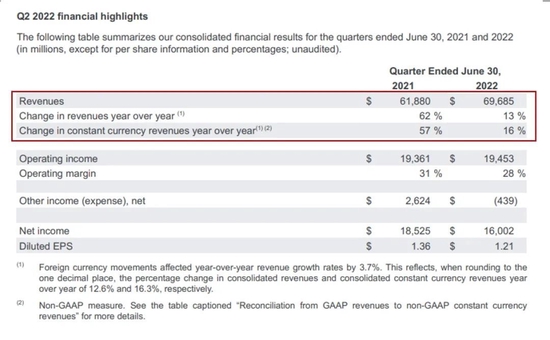 The picture is taken from Google’s second quarter financial report

Although the overall performance is not good, Google’s most critical advertising revenue has withstood the pressure this time, which has greatly eased the anxiety of investors in the “advertising minefield”, which caused Google’s stock price to soar by 5% after the release of the financial report.

Separate business data shows that Google’s second-quarter advertising revenue was $56.29 billion, higher than analysts’ expectations of $55.91 billion, a year-on-year increase of 12%. To say that this data alone is not really good, you must know that Google’s advertising revenue increased by 69% in the same period last year, and even the worst quarter in the past two years has a year-on-year growth of 22%.

The rise after Google’s financial report this time is mainly due to the assistance of “little brother” Snap. After last week’s Snap storm, analysts have lowered their forecasts for Google’s second-quarter ad revenue, citing an overall slowdown in online ad sales, giving Google a breather.

This quarter, Google’s advertising business accounted for 81% of total revenue, of which the search business is still the absolute main force, while YouTube advertising has failed to meet market expectations for two consecutive quarters, and the growth rate has plummeted from 84% in the same period last year. to just 5%. The picture comes from CNBC, the copyright belongs to the original author

In addition to advertising, Google’s second growth curve Google Clouds business can only be said to be barely passing. Although the chain still maintained positive growth, the loss narrowed slightly compared with the previous quarter, but the revenue of US$6.28 billion did not meet expectations, and the year-on-year growth rate was only 35.6%, compared with 43.8% in the previous quarter.

Overall, although Google’s cloud computing scale is gradually expanding, it has not contributed much to Google’s profits and is still in a long-term loss.

In addition to the fact that the cloud business is still burning money, Google’s The Other Bets business is still a “gold swallowing beast”. Last quarter, the business delivered a surprise revenue of $440 million, giving the illusion that the betting business seemed to be picking up steam, but this quarter, it’s all back to the archetype.

Regarding the next performance outlook, Google CEO Pichai and the company’s CFO and CBO who participated in the financial report were very cautious. They all mentioned “uncertainty” many times, saying that under the pressure of economic downturn, the company is facing Many challenges. At the same time, it also proposed to slow down the pace of company recruitment and investment until 2023.

Overall, in the current market environment, since investors’ psychological expectations are already extremely low, if the data is not too bad and the data is a little better than its peers, it is a victory. This kind of poor financial report can also rise against the trend. In addition to Netflix, which came back to life by “rotten” before, Google, which released its financial report after Snap, can also be regarded as a representative.

｜Microsoft can’t stand it either: it handed over the slowest growth report in two years, and the recruitment freeze may continue

Over the past few quarters, Microsoft has been playing a mainstay role among tech giants, and whenever market panic hits its peak, Microsoft stands out with an excellent earnings report. But this quarter, the “top student” Microsoft also rarely misfired.

Microsoft’s fourth-quarter 2022 financial report shows that revenue in the fourth quarter was $51.865 billion, a year-on-year increase of 12%, lower than analysts’ expectations of $52.44 billion; profit was $16.74 billion, a year-on-year increase of 2%; net income per share was 2.23 The dollar, below analysts’ expectations of $2.29. Overall, Microsoft’s key indicators are lower than market expectations. Notably, this quarter was also Microsoft’s slowest revenue growth since 2020, and EPS also missed consensus estimates for the first time since 2016.

In terms of business segments, the slowdown in the growth rate of Microsoft’s two core businesses, the “Intelligent Cloud” business and the poor performance of Office-based productivity and business process businesses are the main reasons for the setback of market confidence. reason.

First of all, the “intelligent cloud” business has been the most important booster for Microsoft’s share price growth in recent years, and this time, the “intelligent cloud” business revenue, including Azure, GitHub, server products, and cloud services, was $20.91 billion. It missed market expectations of $21.1 billion. In addition, the growth rate of Azure and other cloud services has also fallen back to 40%. You must know that since 2020, the growth rate of Azure has not been lower than 45%, and the first two quarters have maintained a year-on-year growth of 46%. 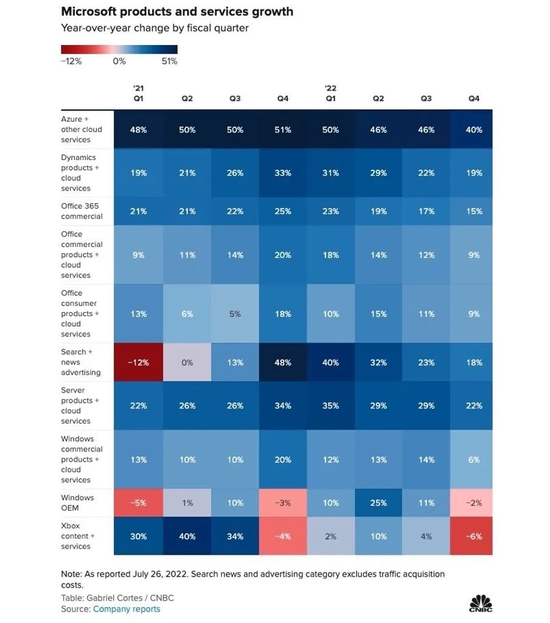 The growth rate of Microsoft’s various businesses, the picture comes from CNBC

In addition, Windows OEM revenue related to the global PC industry declined 2% year over year this quarter, in stark contrast to the strong growth of more than 10% in previous quarters. Microsoft said that the combination of multiple reasons caused a significant decline in this indicator, including the appreciation of the US dollar, the Russian-Ukrainian war, and the closure of Chinese factories due to the epidemic.

In addition to the above two businesses, almost all of Microsoft’s other sub-businesses performed flat this quarter.

The Productivity and Business Processing business, which includes Office products for businesses and consumers, LinkedIn, and Dynamics products, recorded revenue of $16.6 billion, up 13% year-over-year; Office business products and cloud services revenue increased 9%; including Windows, Xbox The “more personal computing” business, which includes Surface computers, had $14.4 billion in revenue, up 2 percent from a year earlier. Additionally, the reduction in ad spend negatively impacted LinkedIn and search and news ad revenue by more than $100 million.

In an environment full of uncertainty, Microsoft also paid $113 million in layoff compensation. Earlier this month, Microsoft announced a 1% layoff, and the pace of hiring in various departments has slowed significantly. This time, Microsoft said that the hiring freeze will likely continue for some time.

Although it handed over an unsatisfactory financial report, it is not all bad news from Microsoft this time.

First, Microsoft said it had signed a record 10 million+ Azure contracts worth $1 billion. At the end of the financial report, Microsoft also gave strong performance guidance, believing that Microsoft will achieve double-digit sales growth in fiscal 2023, and the target performance guidance given by the intelligent cloud and Office businesses are also higher than market expectations, driving the market. Afterwards, the stock price turned from falling to rising.

In general, looking at the financial report data alone, the three giants Meta, Google and Microsoft obviously did not meet expectations. So, do you think today’s sharp rise in U.S. stocks is a “return to the light” or has begun to bottom out? How do you think Apple and Amazon will perform tomorrow? Welcome to leave a message for discussion.

This article is reproduced from: http://finance.sina.com.cn/tech/csj/2022-07-28/doc-imizirav5713910.shtml
This site is for inclusion only, and the copyright belongs to the original author.