In the early morning of the 11th Beijing time, U.S. stocks closed sharply lower on Friday, the Dow fell 880 points, and the Nasdaq fell 3.5%. The U.S. CPI inflation data hit a 40-year high in May, and the consumer confidence index hit a record low in June, reinforcing the market’s expectations for the Federal Reserve to continue aggressive interest rate hikes and showing that the U.S. economy faces an increasing risk of recession. U.S. 2-year Treasury yields hit their highest level since 2008.

The closely watched U.S. consumer price index (CPI) report for May dampened sentiment. The U.S. Labor Department reported that the U.S. CPI rose 8.6 percent in May from a year earlier, the largest increase since December 1981. Another data showed that the preliminary reading of the University of Michigan’s consumer confidence index fell to 50.2 in June, a record low.

According to the CME Fed Watch Tool, fed funds rate futures imply that the Fed will raise interest rates by about 215 basis points in 2022, and the federal funds rate will be 2.985% at the end of December.

U.S. stock market turnover champion Tesla closed down 3.12% on Friday, with a turnover of $22.73 billion. According to reports, in May this year, Tesla delivered a total of about 30,000 electric vehicles, and the company said that the current capacity utilization rate has returned to 100%. To ensure safety, the factory still adopts a “double-shift system” for closed production. Before the epidemic, Tesla’s weekly production (24 hours a day, 7 days) was close to 20,000 vehicles, that is, even if it returned to the pre-epidemic level, Tesla’s car production in June would not exceed 80,000 vehicles. Even based on Tesla’s full production of 80,000 vehicles in June, plus 44,301 electric vehicles in April and May, it is expected that Tesla will produce about 120,000 electric vehicles in the second quarter, which is closer than the first quarter. The production of 180,000 vehicles will be reduced by at least 30%.

It was also reported that Tesla filed for a three-for-one split.

No. 2 Apple closed down 3.86%, with a turnover of $12.64 billion. Apple CEO Tim Cook sent a letter to U.S. Capitol Hill on Friday urging approval of draft privacy legislation. Cook’s letter argues for strong privacy legislation at the federal level. The letter appears to be a response to a proposed bipartisan bill called the U.S. Data Privacy and Protection Act on the types of data companies can collect from individuals and how they use it.

On the same day, the UK’s Competition and Markets Authority said it planned to further investigate Apple and Google’s influence in the mobile browser market and Apple’s restrictions on cloud gaming.

No. 3 AMD closed down 4.03% with a turnover of US$9.82 billion. Su Zifeng, AMD’s chief executive, said the PC market growth will slow this year after two years of “very strong PC markets.” Su Lifeng added that it was natural for the PC market to be sluggish after a long period of high growth, but she expected the market for high-performance and adaptive computing to remain “very strong” for the company’s cloud computing, data center chips and There has been a “huge” increase in demand for chips for artificial intelligence applications, which should help boost the company’s profit margins.

No. 4 Amazon closed down 5.6% to $9.44 billion. Amazon announced on Friday that it plans to withdraw from bidding for Indian cricket rights, saying it is wary of a bidding war that will cost billions of dollars.

No. 6 Nvidia closed down 5.95% and traded at $7.97 billion. The trust entrusted by Nvidia executive vice president of operations Shoquist Debora sold 23,600 shares on June 8 at an average price of $188.23 per share, worth about $4.4506 million, according to SEC filings. In addition, Robertson Donald F Jr, the company’s chief accounting officer, received 9,480 shares of restricted stock on June 8.

Alibaba, the seventh-ranked Chinese concept stock, closed down 0.05%, with a turnover of US$5.49 billion.

After the results, RBC analyst Rishi Jaluria cut his price target to $80 from $85 and maintained an outperform rating on the stock. The analyst told investors in a research note that DocuSign’s first-quarter results were weak, management underestimated the impact of rising interest rates, and underlying metrics were all underperforming.

The 15th Adobe closed down 7.64%, with a turnover of 1.75 billion US dollars. Cowen analyst J. Derrick Wood cut Adobe’s price target to $550 from $600 and maintained an outperform rating on the stock. The analyst said the survey showed Adobe’s second-quarter performance was likely to be slightly better than the first, but trimmed its full-year 2022 guidance slightly. He expects second-quarter results to be modest and in-line, but that should be good enough given the weak sentiment.

The following are the 20 most actively traded stocks on the U.S. stock market that day (by turnover): 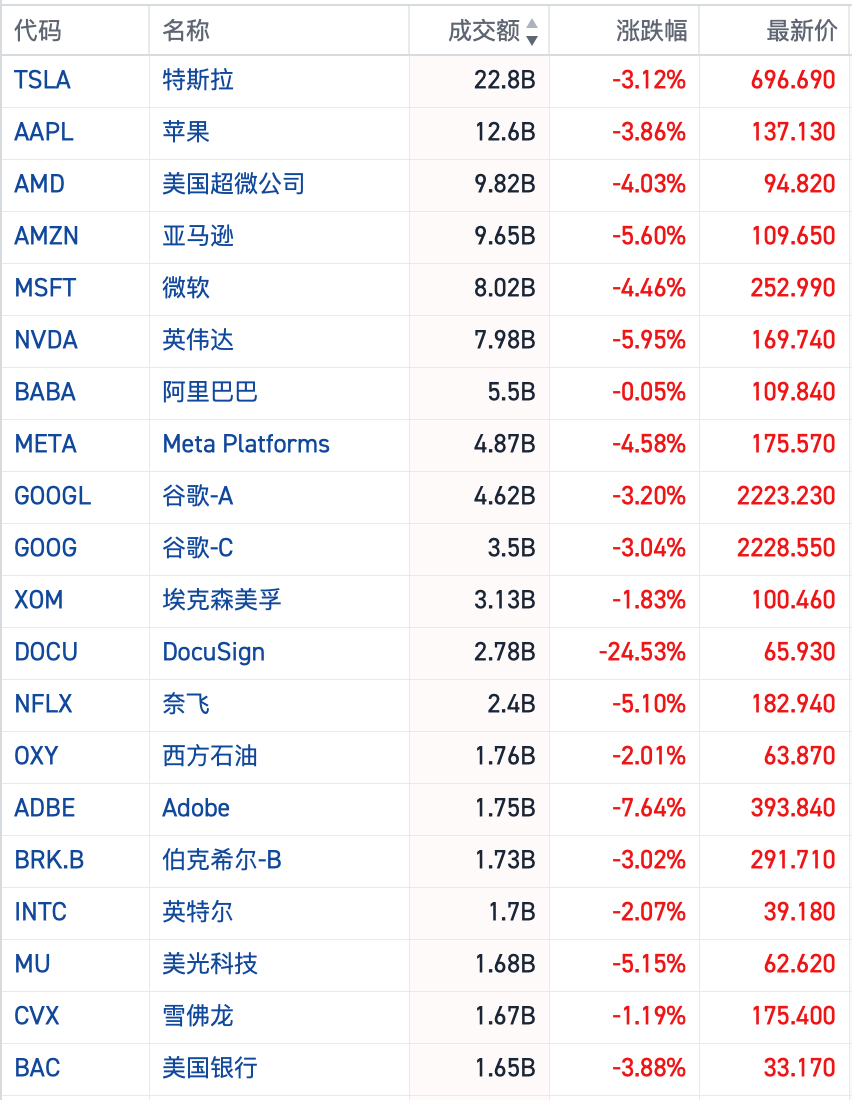 This article is reprinted from: https://news.futunn.com/post/16342566?src=3&report_type=market&report_id=207889&futusource=news_headline_list
This site is for inclusion only, and the copyright belongs to the original author.