At the Gartner Supply Chain Conference in Florida this week, executives from various retail giants were baffled by the current economic environment and showed little enthusiasm for the meeting.

In early 2022, the U.S. economy is booming. It’s so booming – so much so that U.S. ports and terminals can barely handle the influx of merchandise imports; all companies desperately need labor to get to work, just individuals; many closed during the pandemic Movie theaters, offices, airlines and other services have reopened. Compared to a year or two ago, Omicron appears to have little impact on the United States.

The economic environment was good at that time. Not so much now.

Every day there are more and more invisible signs of recession, such as declining housing starts and a slowdown in GDP growth , all with the Federal Reserve raising interest rates; four decades of high inflation , and Record-high gas prices , all of which have only added to the premonition of a recession. But even with the current dire economic climate, many remain skeptical of the possibility of a recession, given persistently low unemployment and some indicators that, while not as strong as they were at the start of the year, are still exceptionally healthy.

It’s not shocking to fall back after a rise, it’s shocking how quickly it fell back.

The transportation indicators are irritating, and the real hammer economic environment has deteriorated

The slump in the transportation industry is evident, if not a full-blown recession. While other industries are debating whether the economic environment is really that bad, logistics providers have been feeling the pain for months, and the shift has been jaw-droppingly fast.

Shipping rates to move containers from Asia to major ports in North America or Europe have fallen 23 percent since the start of the year, according to maritime research firm Drewry. Freight forwarder Freightos said freight rates on the China-U.S. West Coast route plummeted 38% month-on-month. FreightWaves forecast this week that seaborne volumes will plummet this summer as bookings outside of China drop. Spot van rates for trucking have fallen 31% since the start of the year. Some truck drivers say they have been hit hard by rising diesel prices and plunging freight rates. Even the firmest railroads reported a 3% year-to-date decline across the board, with only coal, chemicals and oil sands loadings increasing.

And the recovery of transportation business after the epidemic is faster than anyone imagined, and it is getting faster and faster. When it comes to ocean shipping, the number of cargo ships is at a record high, according to research firm Sea-Intelligence. In March this year, Sea-Intelligence predicted that after the Spring Festival, ocean shipping capacity will increase by 20% compared with 2019, and the shipping business of “Asia-US East Coast” will soar by 40%. When it comes to trucking, small haulers are very popular. The number of trucks available to transport goods has increased by 10% since the start of the pandemic.

Moreover, this phenomenon does not only appear in the transportation industry.

The retail industry is in an awkward position

Walmart, Amazon, Home Depot, Best Buy and most other retailers have found themselves and consumers not matching supply and demand — having bought so much in the past year that they now have to contend with “inventory bloat.”

When everyone buys and buys without thinking about the balance, retailers are also trying to find ways to stock up and stock up.

At some point this year, however, the desire to buy, buy, and buy finally died down. Some people are freaked out by inflation, some are put off by high tax bills, and still others decide not to buy and spend their money on overseas travel and food.

Evidently, retailers didn’t realize the “buy, buy, buy” craze was about to die down this quarter, and they quietly continued to build up their inventory — many of which were depleted in 20 and 21. After years of eccentric events such as trade wars, pandemics, etc., fears of another black swan have driven many logistics managers to keep ordering just in case.

This spring, retailers realized they were “going too far.” Amazon said on an earnings call in April that it had to downsize after doubling its warehouses. A few weeks later, Bloomberg reported that the big-box retailer was quietly trying to wind up or sublease at least 10 million square feet of warehouse space. Such a shift is scary for Amazon, with many investors betting that not only will it climb all the way up, but its logistics business will be unrivaled.

Amazon’s warehouse space can be sold or subleased, but what about the goods in the warehouse? According to federal filings for the first quarter of 2022, the value of Amazon’s total inventory rose 47% from a year earlier, but its North American net sales rose only 8%. 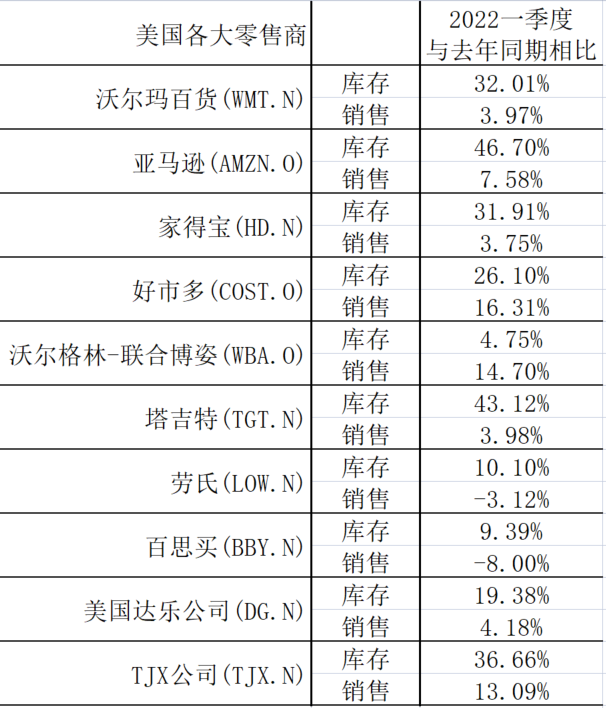 America’s retail giants are in big trouble, especially those that focus on durable goods rather than groceries. Most of the retail giants reported their quarterly earnings last month, and their stock prices fell.

Target was the first to suffer, reporting earnings on May 18 that fell short of investors’ expectations, while its expected profit margin was 5.3%. The backlog of kitchen appliances and electronics is the culprit. Shares of Target plunged 25%.

Then, the retail giant did something that everyone expected — on Tuesday, June 7, Target told investors that it expected a profit margin of more than about 2% (lower than its previous profit forecast) . It will slash prices on some items and cancel future orders. It’s highly unusual for a public company to cut its profit forecast just a few weeks after an earnings report. Target said the lower profit forecast was due to a “reasonable adjustment” to inventory — people are no longer buying items like TVs, outdoor furniture and kitchen utensils as they did last year, the delicate or bulky high-priced items that Target sells in. Bought from Asia at record high shipping rates for 21 years.

And the “cutting frenzy” isn’t just happening at Target. Gap (one of America’s largest apparel companies) sells leggings that were originally $60 for $12. Target is 25% off TVs and 42% off patio supplies. Overall, shares of consumer staples stocks have fallen about 9% from their mid-April highs, while consumer discretionary stocks have tumbled about 20% over the same period.

Those in the logistics industry are not surprised. After all, if trucks and ships are moving less, that’s a sign that consumers are buying less and that manufacturers are lowering production. High-level economists and transaction managers seem to “look down” on the logistics industry. Freight brokerage Convoy has a hilarious finding – the ongoing downturn in the trucking industry seems to only affect truckers. So why has the trucking industry been in recession before nearly every recession since the 1970s?

Retail giants are caught off guard as consumer demand plummets

Even for one of the world’s largest retailers, it can be difficult to accurately forecast demand. You can look at the key indicator of “inventory-to-sales ratio” . This indicator is concise and clear, and the US government also attaches great importance to it.

The chart above is the inventory-to-sales ratio in the United States to 20 years ago. The inventory-to-sales ratio has been picking up since last year, leading some to believe there will be no recession this year. Therefore, the American Retail Federation announced on Wednesday (June 8) that it expects port cargo volumes this year to be roughly comparable to 21 years of hot data. Coincidentally, this remark was frantically slapped by the shipping data given by FreightWaves and JPMorgan Chase analysts on Wednesday.

Inventory-to-sales ratios for staples are even more staggering. Furniture, household goods and appliances, building materials and garden equipment, and “other general merchandise” categories that include Walmart and Target have higher inventory-to-sales ratios, according to government data analyzed by Michigan State University. For Target, the climb is frighteningly fast. As of November, Target’s inventory-to-sales ratio was roughly on par with pre-pandemic levels. Since November last year, the data began to soar.

However, the fiery economic environment suddenly disappeared, and no one really knew what was going on. At the Gartner Supply Chain Conference in Florida this week, executives from various retail giants were baffled by the current environment and had no enthusiasm for the meeting – in In early 2020, retail giants canceled orders, predicted a recession, and then found their hasty decisions left shelves empty and consumers complaining. Now, they’re rushing to stock up, shelves are full, and consumers aren’t buying, so that the balance sheets of the retail giants are eye-catching. This change made them all stunned.

This article is reprinted from: https://news.futunn.com/post/16326772?src=3&report_type=market&report_id=207869&futusource=news_headline_list
This site is for inclusion only, and the copyright belongs to the original author.