When using Shenzhen Telecom’s broadband dial-up Internet access, if you do not manually set the DNS, the system default DNS will be used after dialing up: Shenzhen Telecom’s DNS, there are many problems with this DNS, it is recommended that telecom users use a more professional and effective domestic public DNS. For example, Ali DNS, Tencent DNS, etc.

When I was surfing the Internet recently, I found that many frequently visited webpages would have problems, such as the pictures could not be displayed, Javascript could not run, etc. After a lot of investigation, I found that the root of the problem was that I used an unreliable DNS: Shenzhen Telecom DNS (IP address 202.96.134.133).

I pinged these two domain names and found that the IP addresses were wrong, and they were both changed to 127.0.0.1. In order to confirm whether it was a DNS problem, I used the nslookup command to verify.

The nslookup command is used to query DNS records to check whether the domain name resolution is normal, and to diagnose network problems when the network fails. The command format is: nslookup domain [dns-server]

I enter the following command 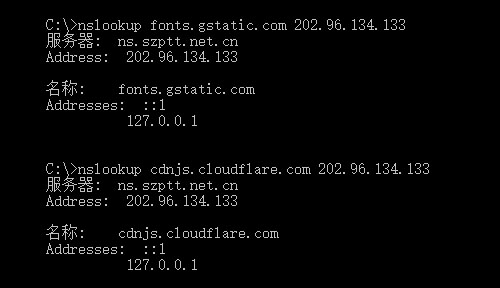 For comparison, I use commonly used domestic public DNS, such as Ali DNS, Tencent DNS, Baidu DNS, 114DNS, etc. for verification, all of which can return the correct IP address, as shown in the figure below. 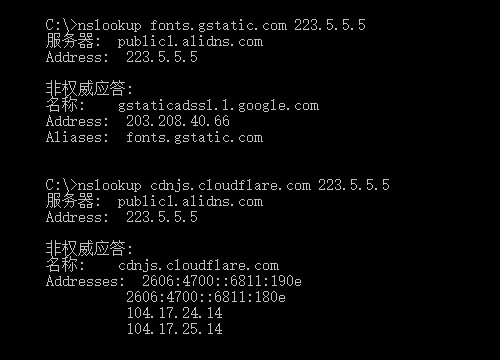 So I came to the conclusion that Shenzhen Telecom was messing around.

I have only found that the domain name resolution of two regular websites has been illegally tampered with. I believe that the number of domain names that have been illegally tampered with should be very large. Given that Shenzhen Telecom’s DNS is so unprofessional and unreliable, it is recommended that telecom users in Shenzhen go online. Manually set the DNS to more professional and reliable other domestic DNS, such as Ali, Tencent and other DNS, don’t use Shenzhen Telecom’s DNS, so as not to bring a lot of unnecessary problems to your Internet.

This article is reprinted from: https://www.williamlong.info/archives/6842.html
This site is for inclusion only, and the copyright belongs to the original author.