With warmer weather and signs Russia is not expected to have to pay for fuel in rubles until next month, European gas prices continued to fall to their lowest levels since the start of the Russian-Ukrainian war.

Benchmark Dutch natural gas futures fell as much as 12 percent to 84 euros a megawatt-hour, the lowest level since Feb. 23, the day before the Russian-Ukrainian war broke out, before paring losses to 1.8 percent at press time. The front-month contract fell for a second straight session after falling 9.2% on April 14 ahead of the Easter holiday. 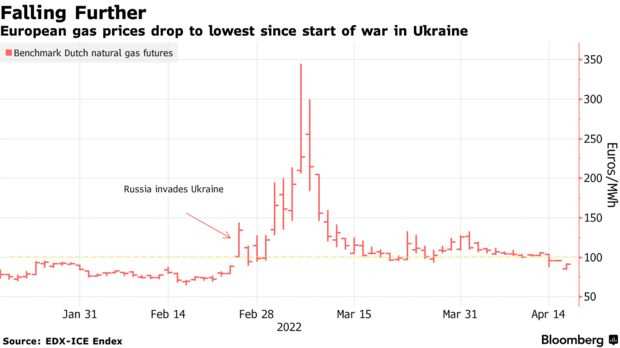 Kremlin spokesman Dmitry Peskov said on Monday that Europe still has some time to pay for Russian gas in rubles, with April payments due mainly sometime in May. He declined to comment on whether any customers agreed to pay in rubles or open accounts as required.

Above-average temperatures in southeastern Europe will spread to central Europe next week, Maxar said in a report. This may relieve the pressure on natural gas demand to some extent. The weather forecaster added that the Iberian Peninsula will be colder than usual.

Even before the Russian-Ukrainian war, Europe was dealing with an energy supply crisis and competing with Asia for LNG. Spot LNG prices in Northeast Asia have been depressed as coronavirus-related lockdowns weighed on demand.

Edmund Siau, chief analyst for gas and LNG at consultancy FGE, said: “Gas prices have fallen quite a bit as short-term fundamentals soften. Demand destruction and fuel switching have eased pressure on gas prices in Europe, but competition from Asia is looming. Traders want to know what plans are in Asia for restocking ahead of winter.”

However, Russian gas shipments to Europe via Ukraine were expected to be below capacity on Tuesday as supply orders fell ahead of Easter. Gazprom PJSC has stated that its shipments meet customer requirements. This article is reprinted from: https://news.futunn.com/post/14655520?src=3&report_type=market&report_id=203443&futusource=news_headline_list
This site is for inclusion only, and the copyright belongs to the original author.