The answer might be surprisingly simple – because Akira Toriyama is not in Tokyo.

Because the headquarters of several leading Japanese manga magazines are in Tokyo, most manga artists will move to Tokyo to live after their debut for the convenience of work. The description of “Going to Beijing in xx years” can basically be seen in the biographies of various cartoonists.

Furthermore, young people aspiring to become cartoonists will also choose to go to Tokyo to find opportunities to train under the hands of cartoonists. The Inoue Takehiko mentioned in the title got the opportunity to be an assistant to Hojo Ji after he went to Beijing [1] .

In other words, manga is an industry, and for various reasons, the resources and talents of this industry are mostly concentrated in Tokyo, Japan.

But it is well known that Akira Toriyama, as a country bumpkin cartoonist, is the most uncomfortable living in a big city. Therefore, he and Kazuhiko Torishima made a special agreement to stay in his hometown to create, “unless the manuscript is not submitted on time”, he will not go to Tokyo.

Not only that, Toriyama Akira, who had never been an assistant and made his debut directly, didn’t even know that there was an assistant system in the comic industry at first .

According to the golden conversation between Akira Toriyama and Takehiko Inoue, when Akira Toriyama learned that he was going to start serializing Arale, his first reaction was not happiness, but worry—“It takes so much time for me to draw a story, Then how can I fix it for serialization?”

Akira Toriyama, who did not know what it was to hire an assistant, did all the paintings by himself at the beginning of the series. Later, after Torishima Kazuhiko’s reminder, he recruited “young people who live nearby and are better at painting” as assistants. 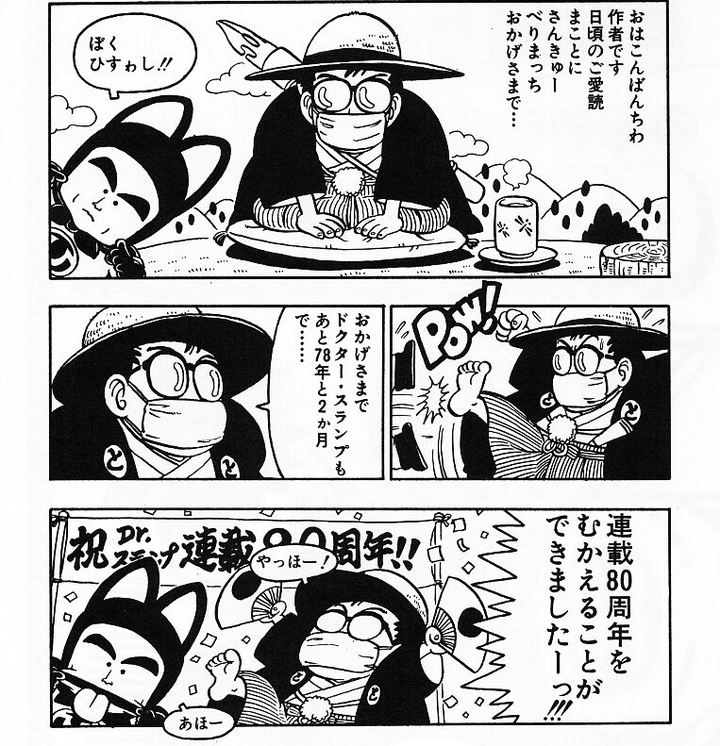 In the two feature-length works, only two assistants have been changed before and after, which is a very small number (Takehiko Inoue expressed inconceivable this in the interview).

It can be seen that Toriyama Akira’s starting point for recruiting assistants is really just to “help yourself as much as possible without affecting your life”, and subjectively does not mean to cultivate new people. Objectively, the young people who stayed in Aichi Prefecture probably didn’t have the ambition and talent to be a cartoonist at first, otherwise they would definitely choose to go to Beijing to experience (Tanaka Kuji later launched some serials under Shueisha, but they were not very successful, while Matsuyama Koji focused on it. in illustration business).

Taking a step back, even if the editorial department intends to let Akira Toriyama lead newcomers, it may not be well arranged for the work location to be far away in Nagoya.

There are thousands of cartoonists working in Tokyo, but Hojo is the only one who likes Umezawa Haru and Inoue Takehiko.

In Tokyo, where there are many masters, the probability of assistants becoming famous is still so low. It is very normal for the assistant Toriyama Akira, who is far away in Nagoya, to be “useable” and not well-known.

There are 27 more answers to this question, see all.

Is it because of Qu Gao and widowhood that the idea that all the sages and sages in ancient times were lonely?

I would like to ask what the Tibetan name “Ze Weng Renzhen” means?

This article is reproduced from: http://www.zhihu.com/question/549035440/answer/2676256330?utm_campaign=rss&utm_medium=rss&utm_source=rss&utm_content=title
This site is for inclusion only, and the copyright belongs to the original author.