It should be noted that when writing this article, the author strives to search and select references and information in the past two years (2020-2022) to ensure the accuracy and timeliness of the analysis. However, due to the limitation of information acquisition channels, there may be errors or incomplete information in this article. Professionals and readers who read this article should also correct me.

The electricity market system can be divided into two systems, one is the pricing system and the other is the regional system.

The pricing system is divided into a planning system and a market system. The planning system is priced by the government, and the power grid companies purchase and sell in a unified manner. The main customers are residents and agricultural users. The provincial development and reform commissions provide price subsidies to these users according to the on-grid electricity prices of different power sources; the market system is a market-oriented electricity price formed by multiple electricity users through independent negotiation and centralized bidding within the floating range set by the government. The customers of this system are non-resident and agricultural users such as industrial and commercial enterprises. 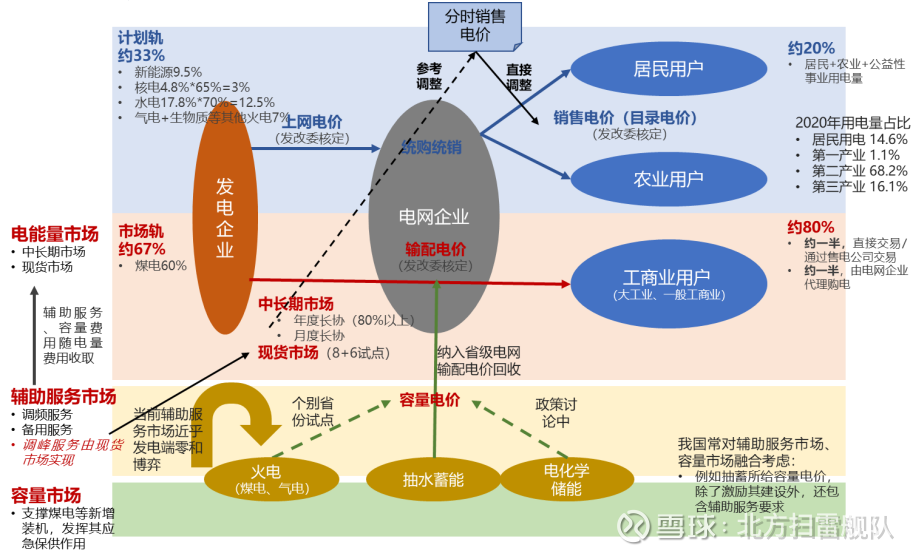 The market system specifically includes multiple levels of market structures such as the electricity energy market, the auxiliary service market, the spot market, and the medium and long-term trading market. 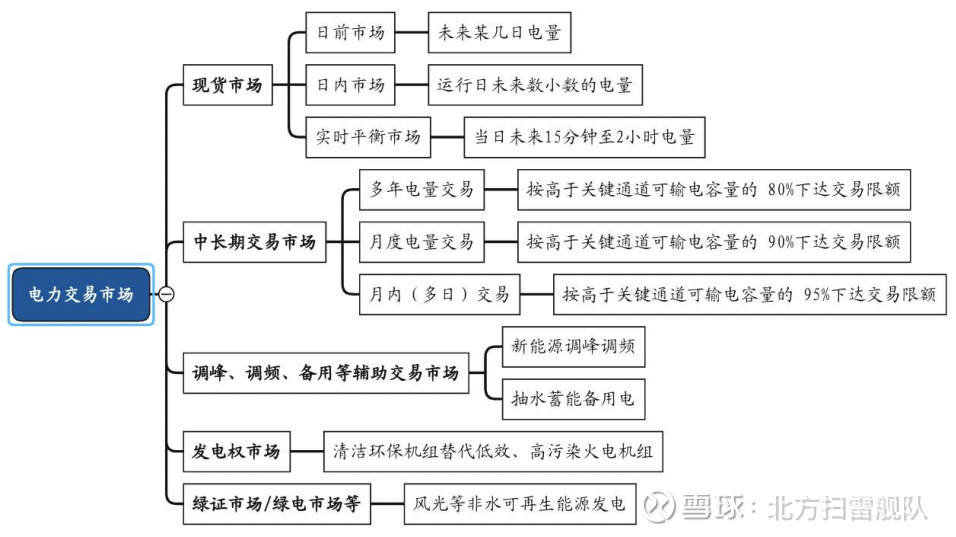 The spot market mainly conducts energy transactions in the short term (days to minutes). Guide the rational allocation of resources in a short period of time and improve resource utilization. The real-time deviation of the power grid can realize the instantaneous balance of power supply and demand through transactions in the spot market. At present, the spot market is in the pilot operation stage, and is gradually operating in conjunction with the medium and long-term market.

The auxiliary trading market (mainly for thermal power plants and other power systems such as electrochemical energy storage, this article mainly discusses hydropower and wind power, so it is briefly introduced) mainly to maintain the real-time balance of power generation and power consumption, so as to ensure that the frequency of the grid is relatively constant. Peak frequency regulation, and some pumped storage transactions. On December 21, 2021, the National Energy Administration revised and issued the “Administrative Measures for Electric Power Auxiliary Services”, focusing on supplementary and deepening of auxiliary service providers, transaction types, sharing and sharing mechanisms for electricity users, and inter-provincial and inter-regional auxiliary service mechanisms. The specific amendments and the subsidy mechanism are as follows: 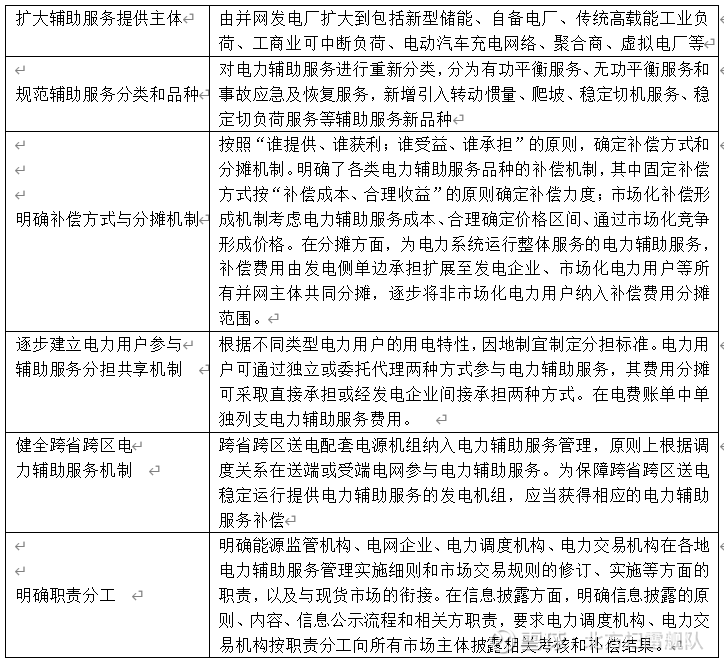 The power generation right transaction refers to the transaction behavior in which power generation enterprises transfer contracted power such as base power contracts and priority power generation contracts to other power generation enterprises through the trading platform established by electricity market transactions, through bilateral negotiation, centralized bidding, listing and other market-oriented methods. It is characterized by the replacement of fossil energy units with clean energy units. In principle, large-capacity, high-parameter, environmentally friendly units will replace low-efficiency, high-polluting thermal power units and shut down generators for power generation, and clean energy generators such as water, wind, light, and nuclear power will replace low-efficiency, high-polluting thermal power units.

The green power market refers to a medium- and long-term power trading market with green power products (currently mainly wind-solar non-hydro power, which is expected to be included in hydropower in the future) as the target to meet the needs of power users to purchase and consume green power. According to the above introduction, the price introduced here refers to the price in the market system, including the market price of electric energy, capacity price, auxiliary service price and cost compensation.

Priority generation price. After the reform, part of the power generation exists in the form of “planned power” or “base power”, which is arranged by the dispatching agency according to the priority power generation, the priority power purchase plan and the actual operation needs of the power grid. This part of the electricity is still purchased by power grid companies and settled according to the on-grid electricity price (benchmark electricity price) approved by the government.

The capacity price consists of a scarce electricity price mechanism, a capacity market and a capacity compensation mechanism. The emergence of capacity prices is a mechanism for regulating power abundance due to the power generation efficiency of different power sources and the need to reduce power waste.

Scarcity electricity price mechanism refers to a method that does not set up a capacity market or capacity mechanism, and relies on a single electricity energy market to solve the problem of abundant power generation resources. The market has no upper limit price or the upper limit price is very high. In the case of scarcity of system electric energy and reserve, the price of electric energy can rise rapidly and sharply, and the demand for power recovery investment can be met through a short-term high price to encourage investment in new power plants.

The capacity market is a market mechanism for pricing capacity. It is a new market established outside the single electric energy market to ensure that the power system meets clear reliability standards. 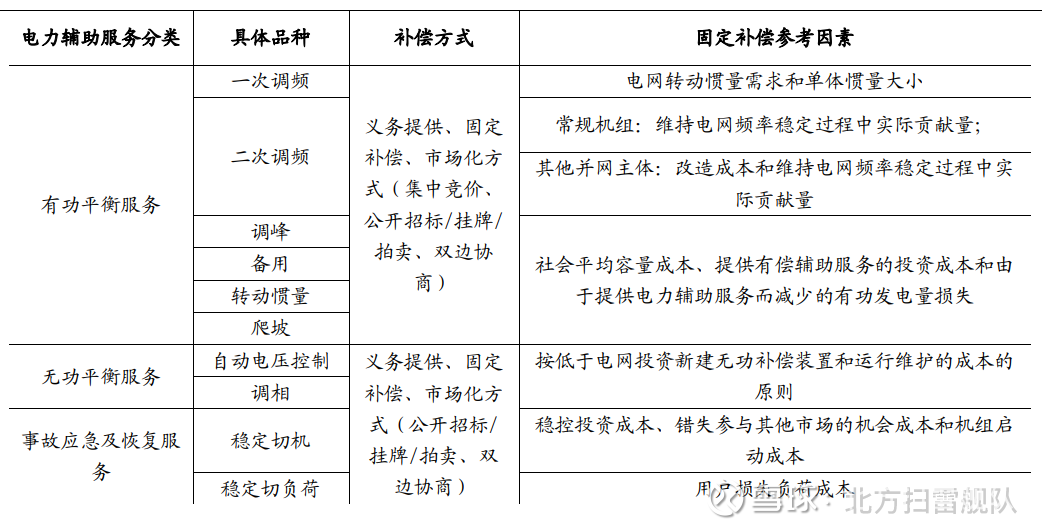 After understanding the entire electricity market and electricity price system, this paper will analyze the Yangtze River Power and the Three Gorges Energy in combination with the business models of hydropower and wind power, respectively. It needs to be clear that the above introduction is the overall power market system, so it will also include the operation and price mechanism of thermal power; since this article mainly introduces hydropower and wind power, this article will selectively select parts of the system introduced above content, which is analyzed as a background. 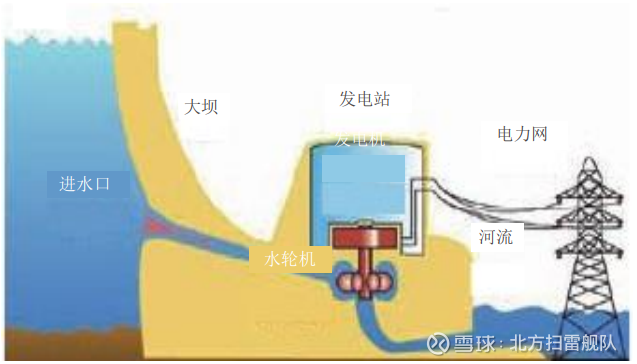 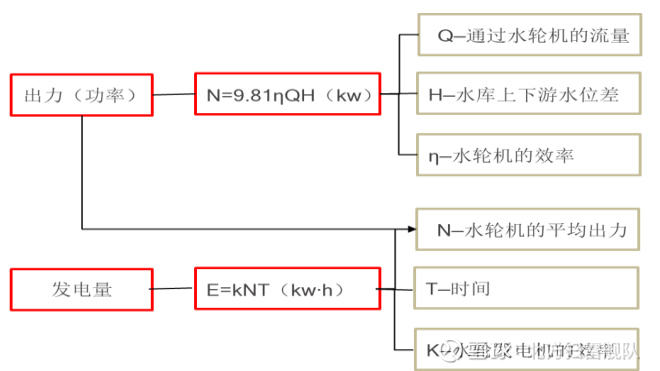 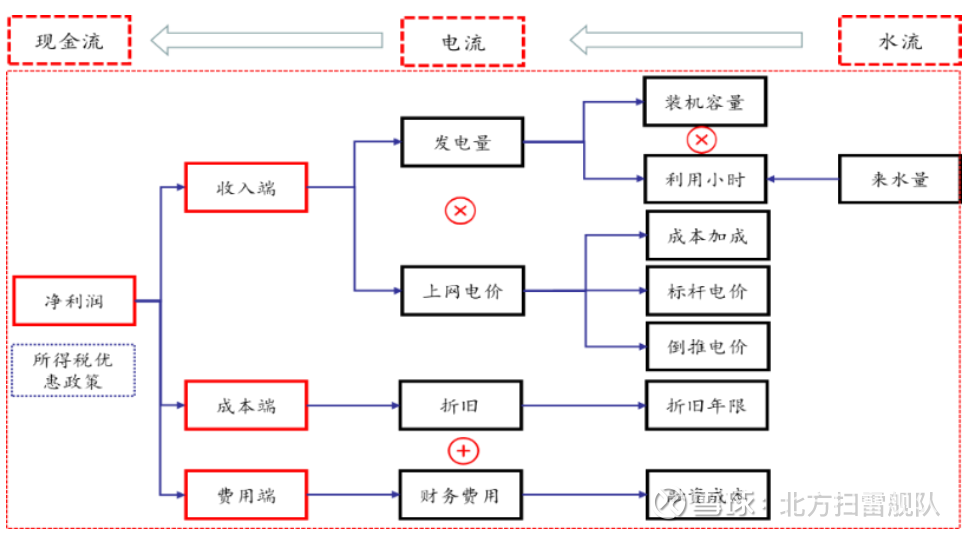 The costs of hydropower enterprises are mainly composed of depreciation (houses and buildings, power generation equipment, water retaining structures), maintenance fees, water fees (reservoir area maintenance funds, water resources fees) and employee compensation (salaries, welfare fees). Among them, 60% are fixed costs, and reservoir area resource fees, water resources fees, various financial fees, material fees and labor costs are variable costs. In general, the cost of hydropower enterprises presents a pattern of “high first and then low”. The initial cost of dam construction is high, including construction costs, relocation costs and other costs; after the dam is completed, its depreciation will be apportioned to each fiscal year, and it will not be accrued until the depreciation is completed. The depreciation period of a building is 40-60 years, and its service life is generally about 100 years (the Hoover Dam in the United States built in 1936 has been in use for 86 years and is still in use), so the depreciation cost is reduced year by year.

Employee expenses are generally dynamic and can be controlled at 5% of operating income. 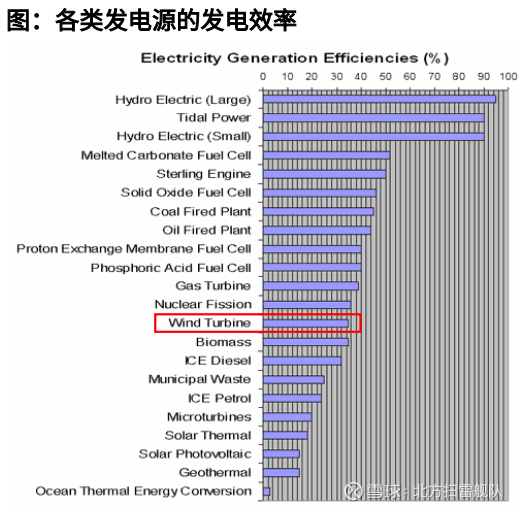 Offshore wind power has more advantages than onshore wind power. First, there is sufficient offshore wind energy, there are no obstacles to block wind energy transfer, and the utilization rate of fans is high; second, transportation is more convenient, and large-tonnage transport ships can be mobilized, so the single machine capacity is large; third, The sea breeze is not disturbed by obstacles, so it is more stable than the land wind, and the fan operation is more stable. 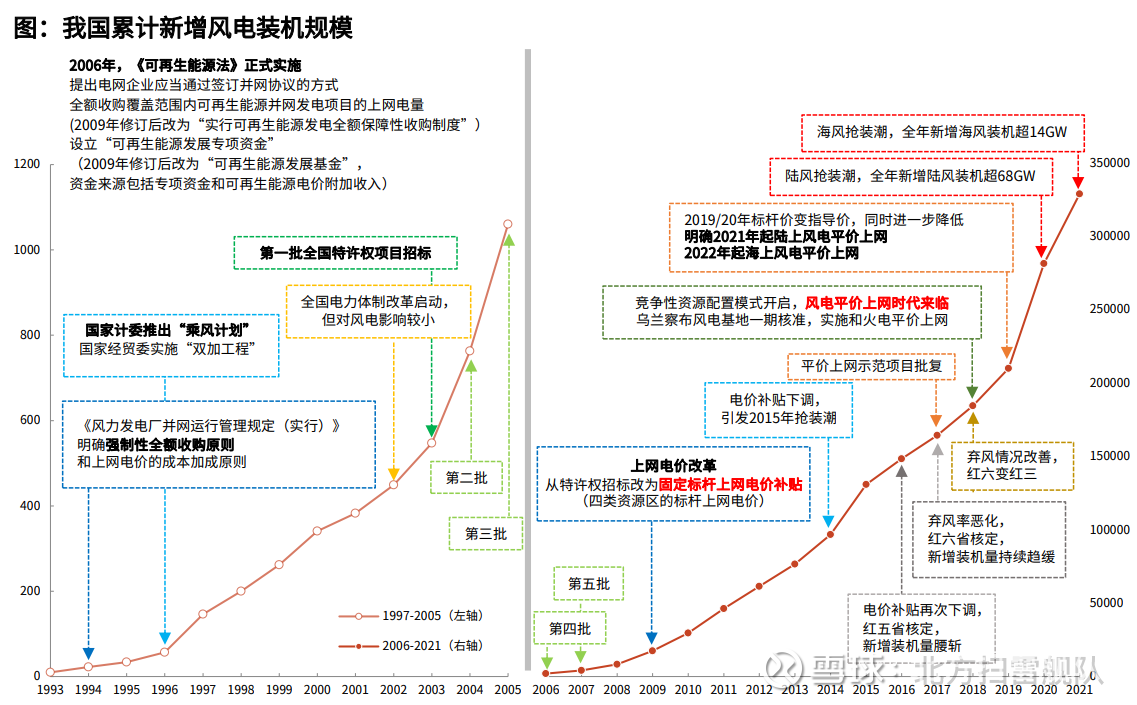 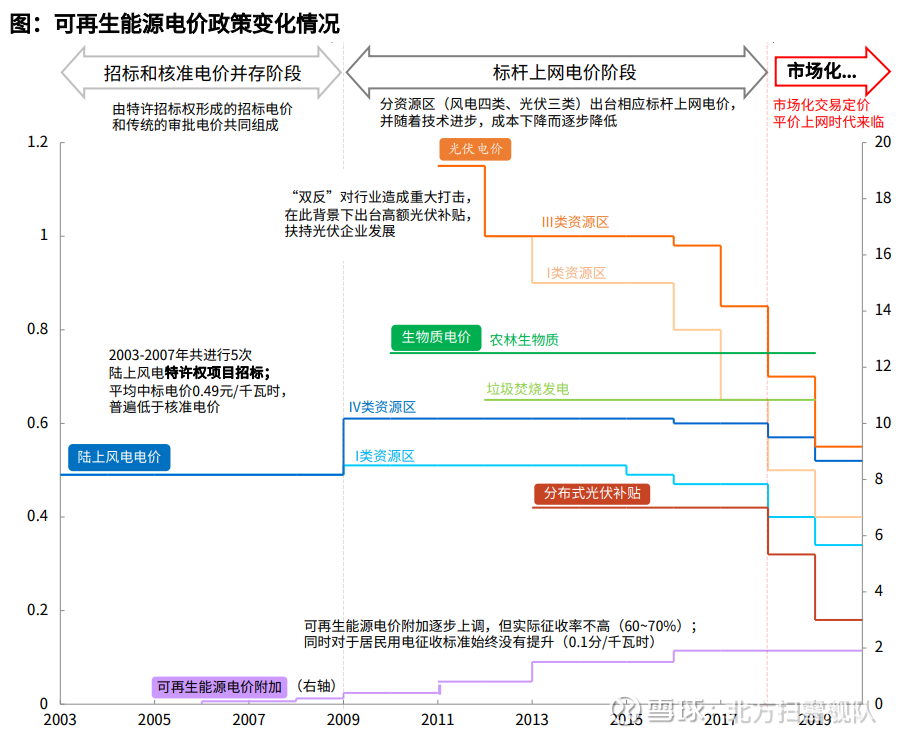 In terms of cost, the cost of wind power mainly includes operation and maintenance costs, loan interest and tax costs. The service life of wind power equipment is generally about 20 to 30 years.

One of the ways to reduce costs is to increase the size of wind power equipment. The increase in the capacity of a single unit means a larger swept area and a higher hub height, a lower cut-in wind speed, and more wind energy can be captured in the same geographical location, which can effectively increase the power generation of wind turbines in the whole life cycle; wind farms with the same capacity use Units with larger single-unit capacity can effectively reduce the investment costs of raw materials, foundation, hoisting, lines, land, etc. allocated to the unit capacity; larger-scale units will reduce the cost and difficulty of later operation, maintenance and management. Therefore, the large-scale unit will effectively reduce the LCOE of wind power generation. A larger single-machine capacity also means that a wind farm of the same capacity requires fewer wind turbines, and the corresponding wind turbine foundation, transportation, installation and maintenance costs are more significantly reduced. 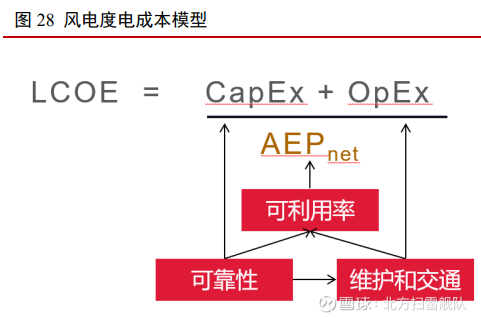 [Huatai Securities] Hydropower will become stronger as time goes by, or meet the inflection point of depreciation

[Beijing Capital Securities] The horn of offshore wind power blew, and the subdivision leader set sail with the wind,

[Guorong Securities] Policy-driven development, infinite scenery is at this peak – an in-depth report on the wind power industry

[Guohai Securities] Auxiliary services for the power market: marketization is imperative, and the 100 billion market is expected to open

This topic has 4 discussions in Snowball, click to view.
Snowball is an investor’s social network, and smart investors are here.
Click to download Snowball mobile client http://xueqiu.com/xz ]]>