Most of the leading chain pharmacies in China have been listed. The four major private chain pharmacies + regional pharmacies such as Shuyu Mining and Jianzhijia + Jingdong Health Internet pharmacy, we can basically see the whole picture of the pharmacy industry.

In the past five years, the pharmaceutical industry policy has changed a lot. The chain pharmacy industry, which has the characteristics of chain retail and pharmaceutical industry, is expanding step by step according to its own store opening rhythm. Under the changes of national policies such as “channel”, “DRG payment reform” and “prescription outflow”, as an offline chain, it is also disturbed by the policies and logic of Internet pharmacies.

Let’s take a look at the 22-year mid-year report and the reports of chain pharmacies after two years of the epidemic. We can see what development drivers, epidemic disturbance factors and changes in market expectations can be seen.

1. The layout of the rivers and lakes of pharmacies

Yifeng, Common People, Dashenlin, and Yixintang are the absolute leaders of offline private chain pharmacies. According to the China Daily, the revenue of several pharmacies is between 8 billion and 10 billion, and the number of directly-operated stores is between 7,000 and 9,000. Therefore, from the framework data, several companies have not opened a large gap, and they are considered the first. One echelon. Of course, different companies have different layout models, development strategies, gross profit margins, and net profit margins, which also lead to differences in the valuation level and market value of the secondary market. However, from an industrial point of view, several companies are in the middle, and the development of several companies basically represents the development trend of the industry.

JD Health of Internet pharmacies. From the perspective of business model, whether it is Ali Health, Dingdang Kuaiyao, or Meituan Buying Medicine, the real competition with offline pharmacies is JD Health, which is self-operated. The revenue of JD Health’s self-operated business reached 17.5 billion, a year-on-year increase of 48.6%, which means that the scale of JD Health is almost the size of the two leading chain pharmacies. Of course, in terms of categories, JD Health is still dominated by non-drugs, and the competition in competing categories is still dislocation competition.

Second, the integration trend of the pharmacy industry

There are more than 400,000 pharmacies in the pharmacy industry as a whole, with single-digit growth every year, which is actually nothing to watch. The most noteworthy is that under the trend of centralized evolution of pharmacies, the increase in the share of leading companies has brought about growth that exceeds the industry. For the top chain pharmacies, their own growth rate = industry growth rate + own store opening increment + industry integration (M&A + franchise increment). Therefore, the development history of head pharmacies is a history of mergers and acquisitions, and the money earned in the capital market is also the profit effect brought about by industrial integration and concentration.

3. The Troika of Pharmacy Growth

Newly opened stores: generally applicable to the encrypted layout of the old area, or the core stores entering the new area. For small and medium-sized pharmacies, the only way to develop is to open new stores on their own. As a large-scale pharmacy, in addition to opening new stores, you can also acquire them.

Mergers and acquisitions stores : If you sort out the capital actions of several leading pharmacies, you can see that these companies have a small merger in a few days and a major merger in a few months. Of course, all the way through mergers and acquisitions, there has also been a lot of capital consumption (several of them have done additional issuance and convertible bonds), and even there is a situation where the valuation difference between the primary and secondary markets cannot be widened. With the weakening effect of mergers and acquisitions, ordinary people began to take the first step to join stores.

Franchise stores: As early as 20 years ago, there was a pharmacy store franchise mechanism in the industry. In my impression, Tongjun Pavilion is basically all franchise stores. The franchise stores in the early years, due to the weak management mechanism, the final effect was not good. In recent years, from the perspective of their own capabilities, several leading pharmacies are more fully prepared and have stronger management capabilities. From the external environment, more small pharmacies and non-pharmacy industry owners are willing to choose to join the top pharmacies A family of chain brands. For the head chain, it is equivalent to increasing the store without capital consumption, and its own procurement platform and management experience can be extended externally. For franchised pharmacies, you can catch a big boat. Under the changeable medical policy, there is a better purchasing price and pharmacy management mechanism.

In the past few years, although several pharmacies were disturbed by the epidemic, they still expanded against the trend, which also resulted in many stores not reaching the break-even period, thus dragging down their performance. In the future, finding the profit inflection point of each store opening + merger and acquisition may be an important way to evaluate the elasticity of performance.

4. The marginal suppression of pharmacies is slowing down

Epidemic disturbance: Starting from the 2020 epidemic, the initial sales of epidemic materials allowed pharmacies to make extra money. However, as the epidemic continued, intermittent closures continued to occur in various places, or cold medicines were not allowed to be sold. For the entire pharmacy industry have a great impact. Therefore, the performance growth rate of various pharmacies in recent years has slowed down, which has a certain correlation with the epidemic. However, taking apart the 22 mid-year report, the operating situation of several pharmacies is that Q2 is better than that of Q1, which is also the main reason for the recent rebound, and the relative performance of the pharmacy sector is relatively good. 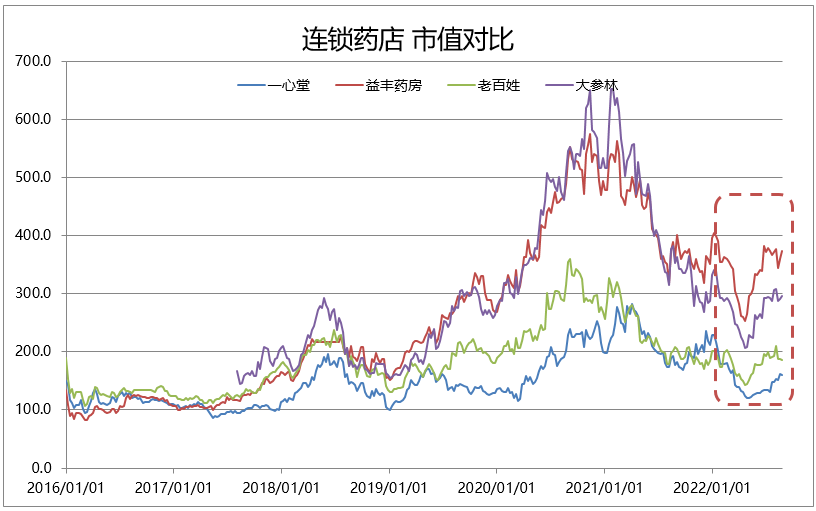 Internet Pharmacy Policy: In our previous article ” Retail Pharmacy, Look at Internet PK, or Look at Your Own Business? ” also mentioned that the statement in the “Drug Administration Law” that “third-party platform providers shall not directly participate in online drug sales activities” has greatly eased the logical suppression of offline pharmacies. In fact, if you have an in-depth understanding of the industry’s operation, you will find that online and offline are development strategies with different focuses. It is too early to say that online drug sales will kill offline pharmacies. Whether it is online direct sales or O2O model selling drugs, it will be one of the pharmacy formats that coexist with offline pharmacies. The emergency attributes, social attributes, and terminal attributes of offline pharmacies are all capital.

The performance of the pharmacy industry has been picking up quarter by quarter, and the suppression effect of the Internet policy has weakened, which may be the most important factor for the rebound of this wave of pharmacies. In the long run, it is still necessary to pay attention to the integration effect of the leading chain on the industry and the improvement of its own operation and management capabilities. Same store growth + new store + new store opening + M&A + franchise, different increments jointly promote the performance growth of leading pharmacies.

There are 35 discussions on this topic in Snowball, click to view.
Snowball is an investor’s social network, and smart investors are here.
Click to download Snowball mobile client http://xueqiu.com/xz ]]>