On June 10, 2022, BYD’s market value officially broke through and stood at 1 trillion , ranking 8th in Shanghai and Shenzhen. Since the market value of the 5th, 6th, and 7th places are all within 1.1 trillion yuan, BYD will probably be able to rank in the top 5 in a short time. If it is fast, it will be this month. 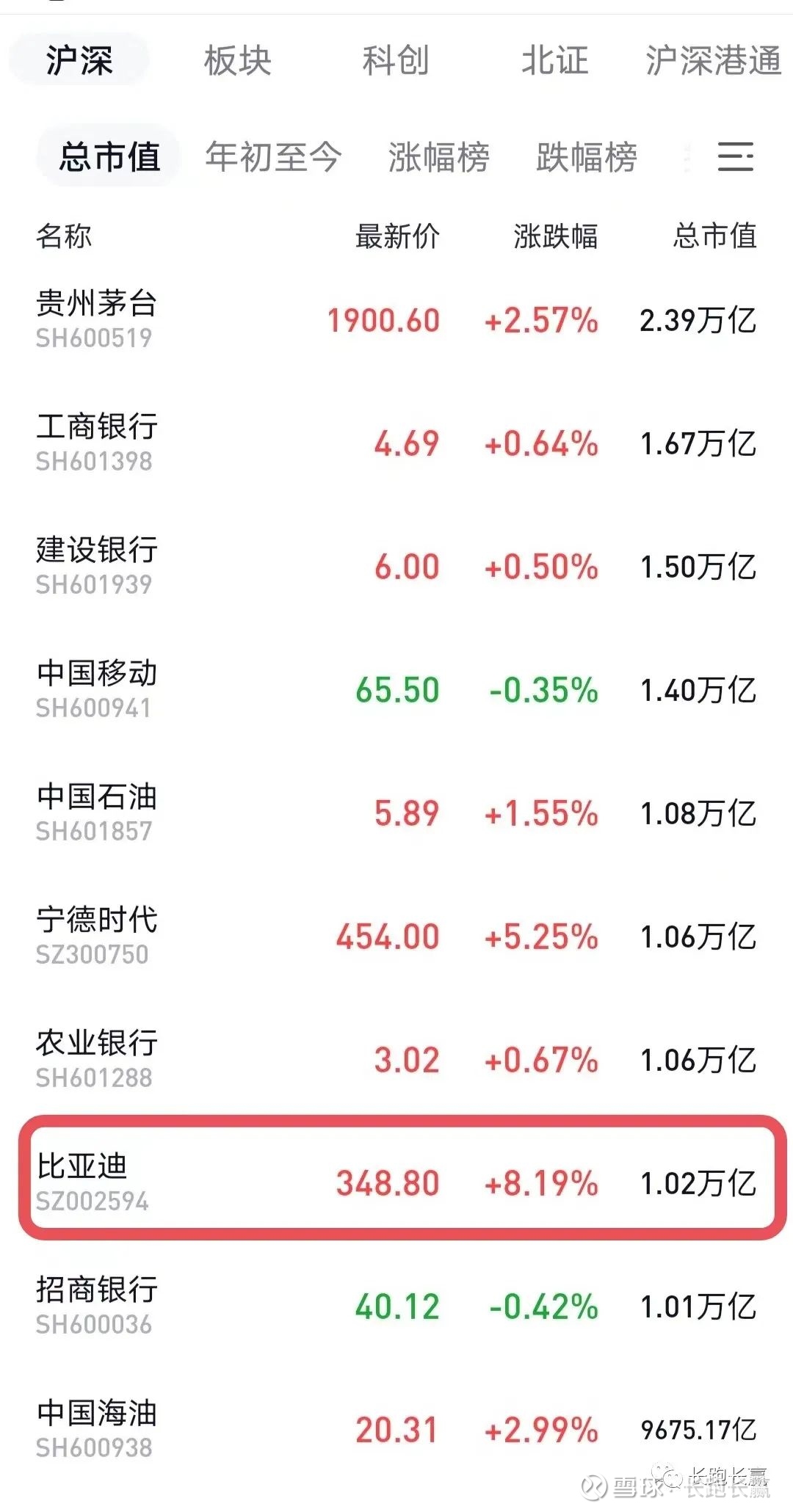 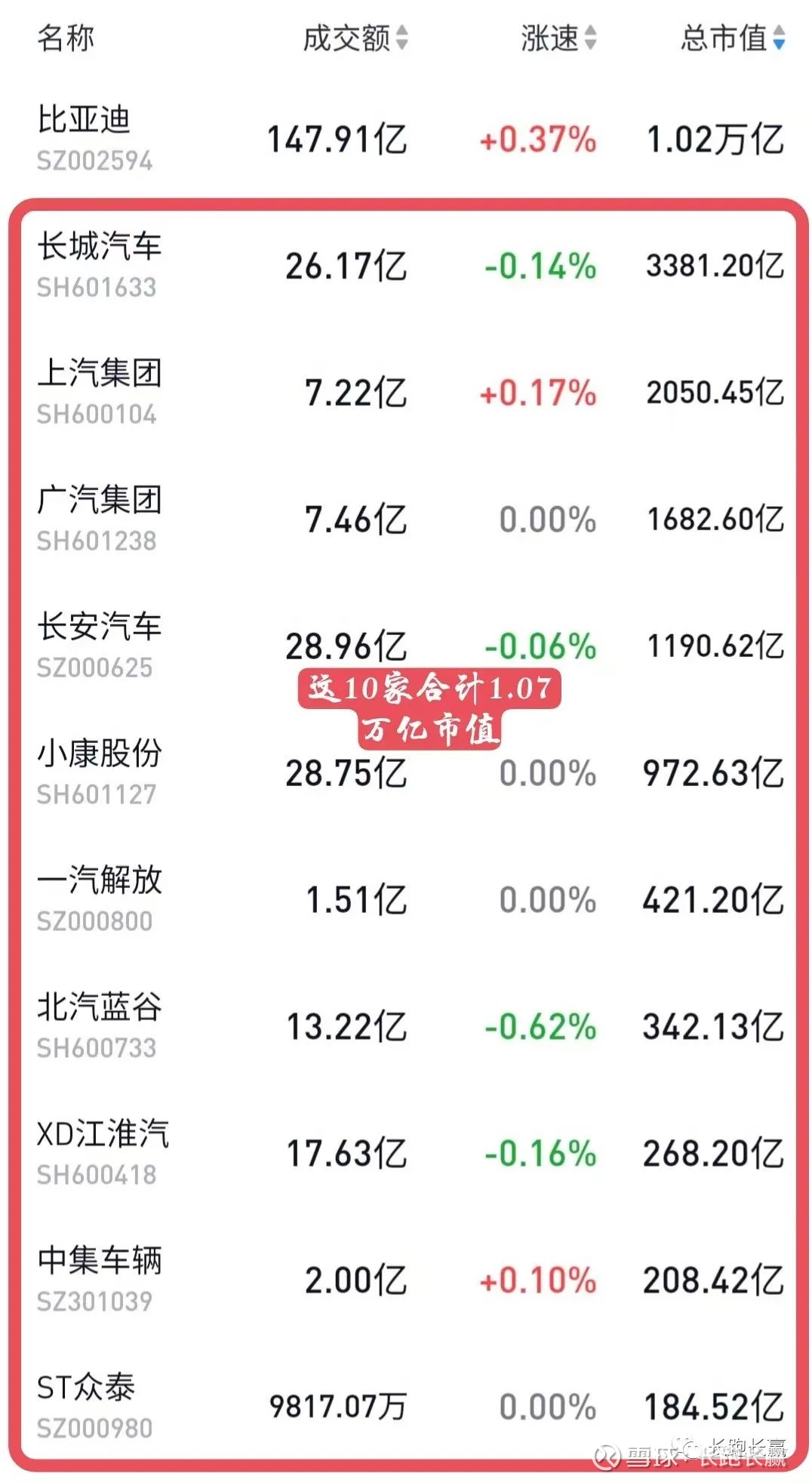 Standing at this historic moment of trillions, today I will make three major predictions for BYD’s mid-term (before the end of 2023) , and talk about the general logic.

Recently, the Federation of Passenger Transport Associations released the ranking of car sales in May.

From the perspective of wholesale sales , BYD ranked second with 114,183 units in May, and the gap with the first place FAW-Volkswagen was 36,688 units. In April, BYD took the first place. In that month, most manufacturers were obviously affected by YQ (which had little effect on BYD). However, with the increase in production capacity of the Shenzhen factory, Changsha factory, Changzhou factory and Fuzhou factory and the commissioning of the Hefei factory at the end of June, it is expected that BYD will take the first place again in July and will continue to rank first in the future. From the perspective of retail sales , BYD also ranked second with 113,768 units in May, and the gap with the first place FAW-Volkswagen was 36,241 units. This angle is actually not much different from wholesale sales. After all, the current export volume of BYD (1,109 in March, 705 in April, and 415 in May) is still very limited, and since the current order has exceeded 600,000, domestic delivery is given priority. . 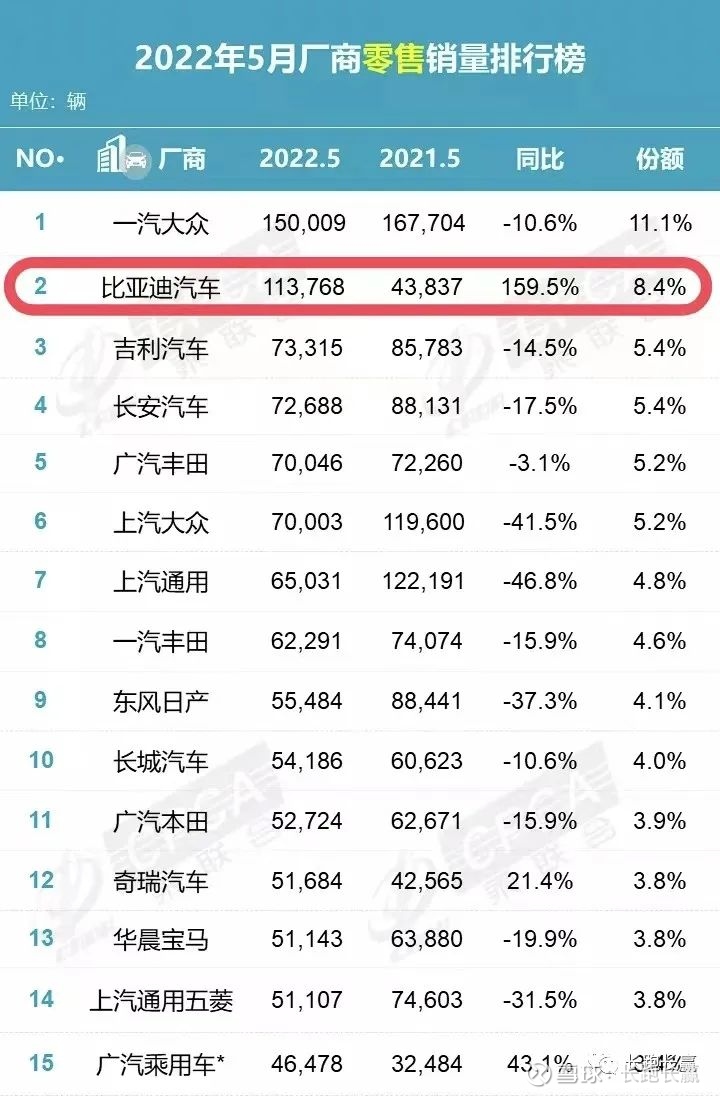 Here ‘s a breakdown of retail sales in May.

In the list of cars in May, Han rushed to No. 3 and Qin was No. 5 . With the increase in the production capacity of the Shenzhen factory, there is a high probability that it will reach a height of 30,000 vehicles in June. According to Qin, after the Hefei plant is put into operation, the sales volume will further increase. In the future, with the increased production capacity of the Seal and Changzhou factories, which will be officially launched soon, it is expected that this model, which may be even more popular than the Han, will soon enter this list. In addition, the Seagull model is likely to be launched in the third quarter, and it will also be a model that sells 10,000 units a month (which will bring pressure to Hongguang MINI). 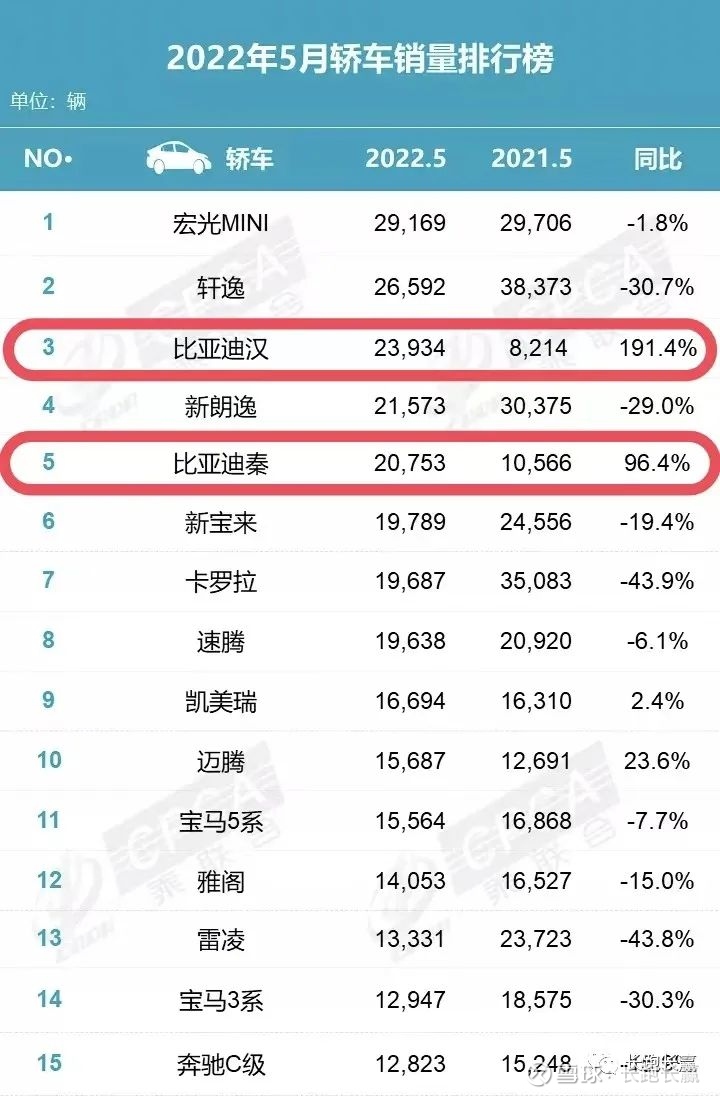 In the SUV list in May, Song won the first place, and its sales volume was nearly twice that of the Haval H6, which had long dominated the list. . According to Tang , due to some special reasons (retail sales of 8,412 vehicles) in May, it did not make the list. With the increase in production capacity, coupled with the popular orders for the 2022 Tang EV and Tang dmp, and the extended battery life of the Tang dmi, after Tang Its monthly sales will hit 20,000 units, and it is expected to reach the top 5 on the list. Later, there will be the frigate 07 , which will also be a popular model; and Denza’s medium and large SUV and medium SUV will be launched. Judging from the popularity of Denza MPV-D9, these two SUVs are also worth looking forward to. ‘s model. BYD is used to being No. 1 in the field of new energy passenger vehicles. In May, it was roughly equivalent to the sum of the following 6 manufacturers (including 2 A00-level brush-based manufacturers – SAIC-GM-Wuling and Chery Automobile). BYD occupies 31.6% of the market share, absolutely leading. 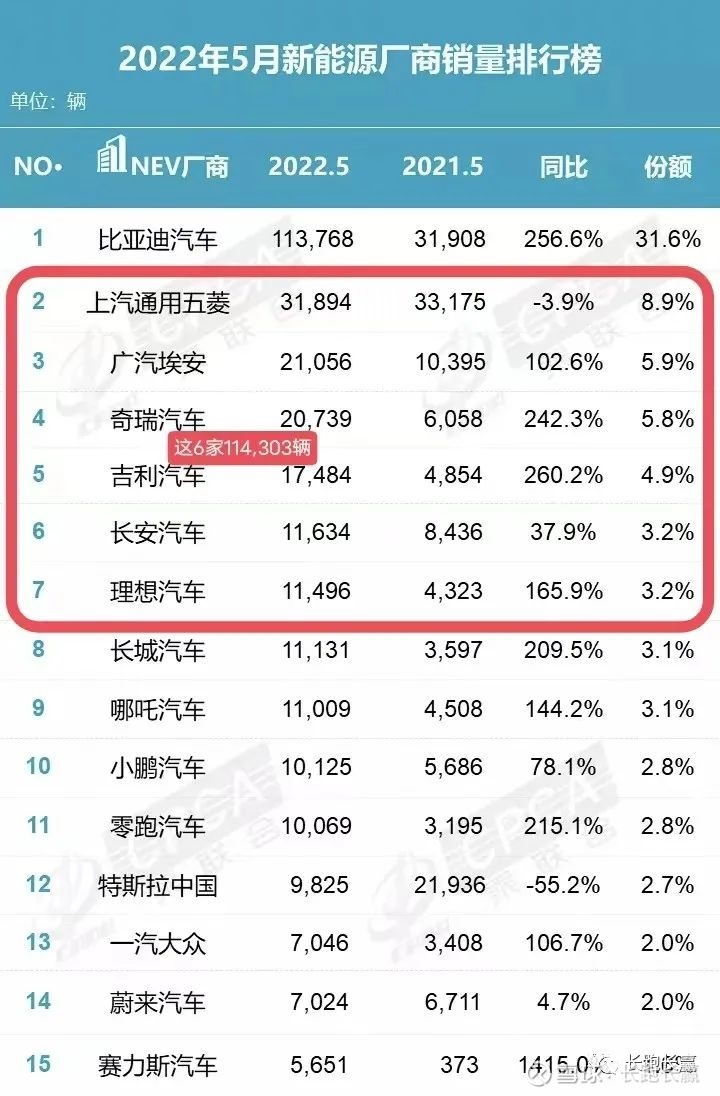 Let’s take a look at the rankings in the field of new energy cars . In May, Han and Qin ranked No. 2 and No. 3, with the “Old Man’s Music” on their heads; Dolphin only ranked No. 8 (or should it be No. 4) due to the impact of the production capacity of Changsha Yuhua Factory; Destroyer 05 was launched for the first time Ranked 12th on the list . With the subsequent increase in production capacity, the ranking is expected to reach the top 8. The seals that will be officially listed later, as well as the subsequent launch of seagulls , will undoubtedly occupy the top position on this list. In addition, the production capacity of the Suizhou Fuzhou factory has increased, and the e2 is also expected to make it to the list. 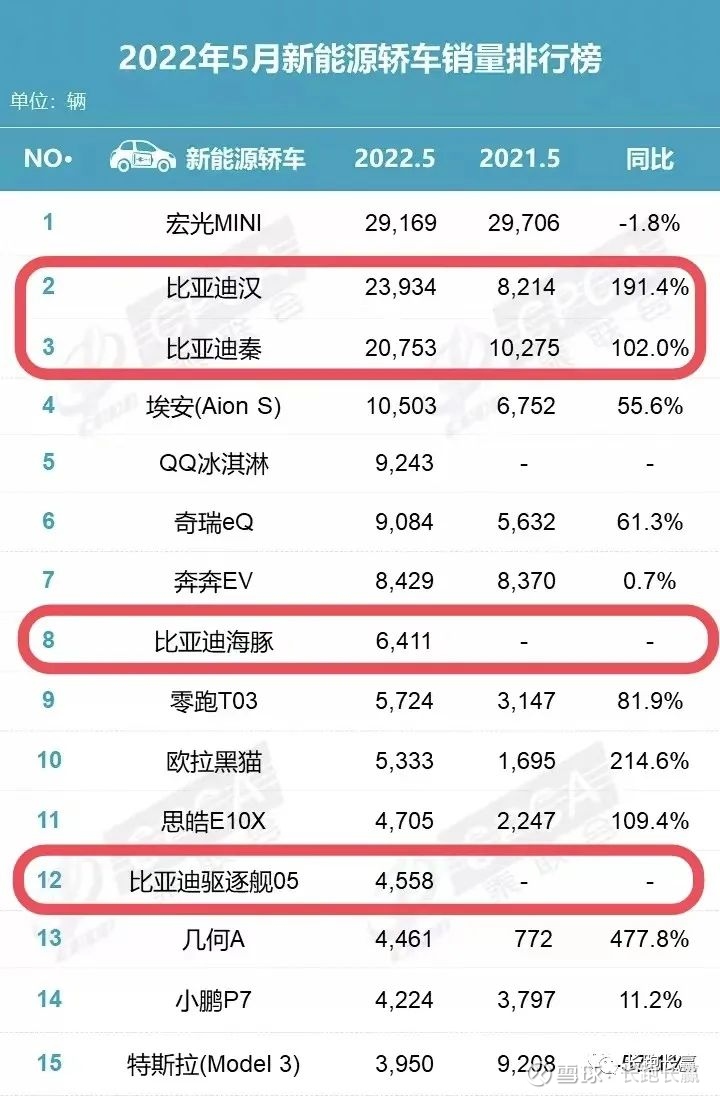 In the field of new energy SUVs , Song won the first place with absolute strength in May, Yuan PLUS won the second place, and Tang won the fourth place (there is a high probability that it will surpass the ideal ONE in June). Potential models that will be listed in the future (not yet listed): Corvette 07 and Denza’s medium and large SUVs and medium SUVs . 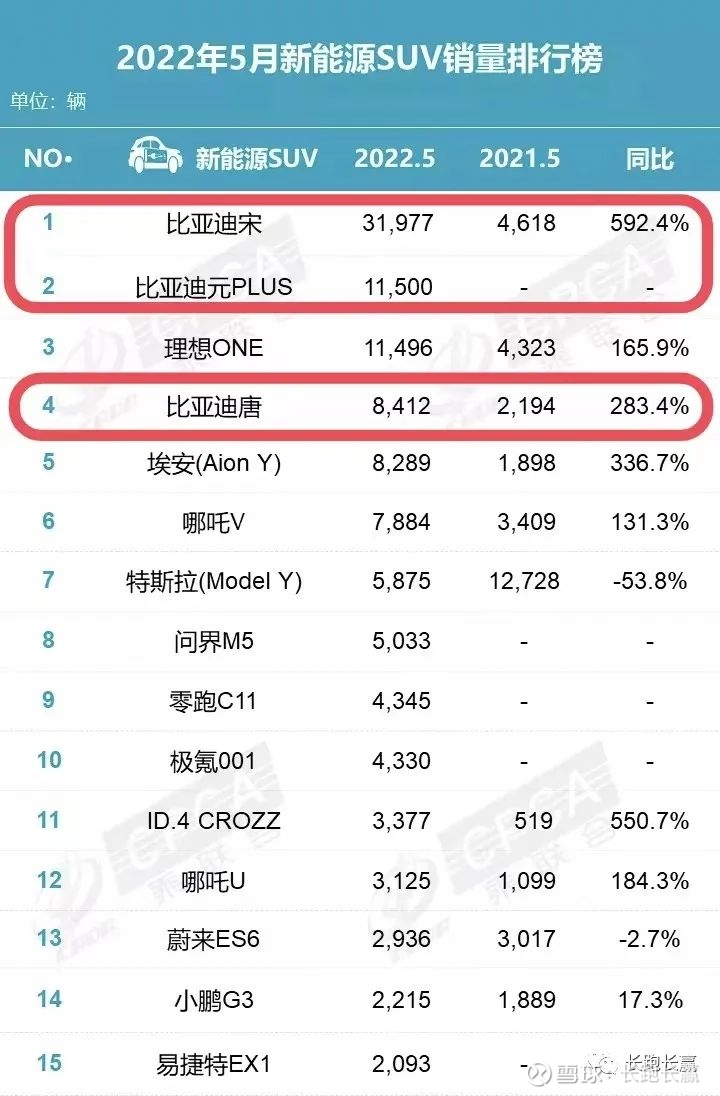 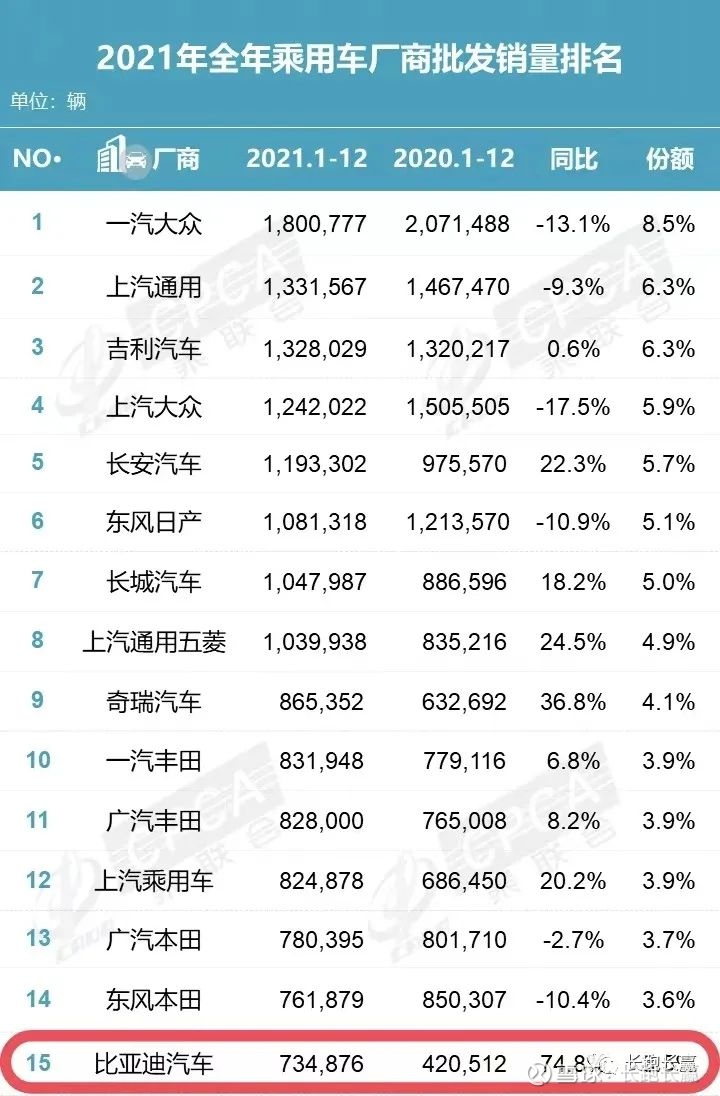 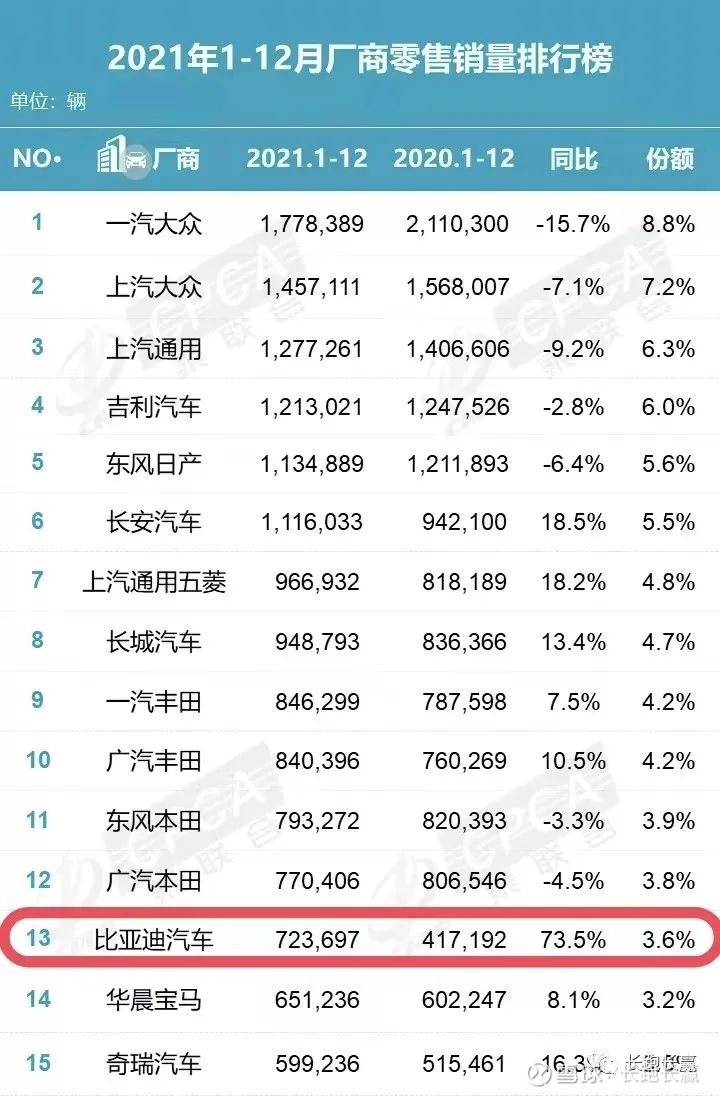 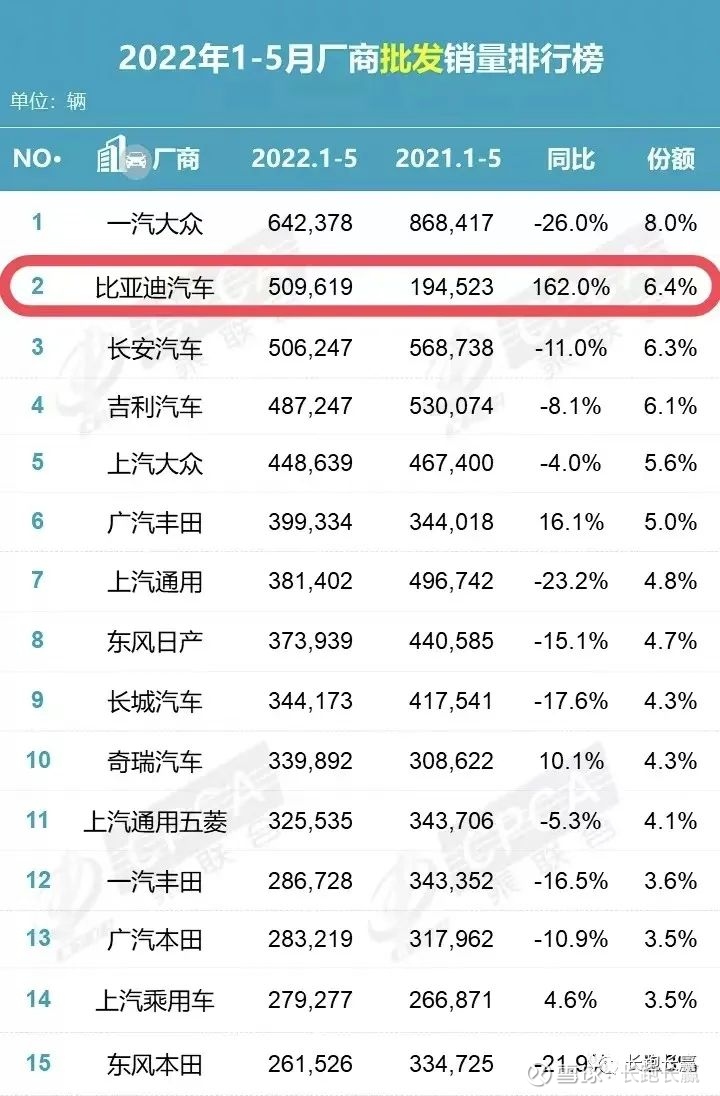 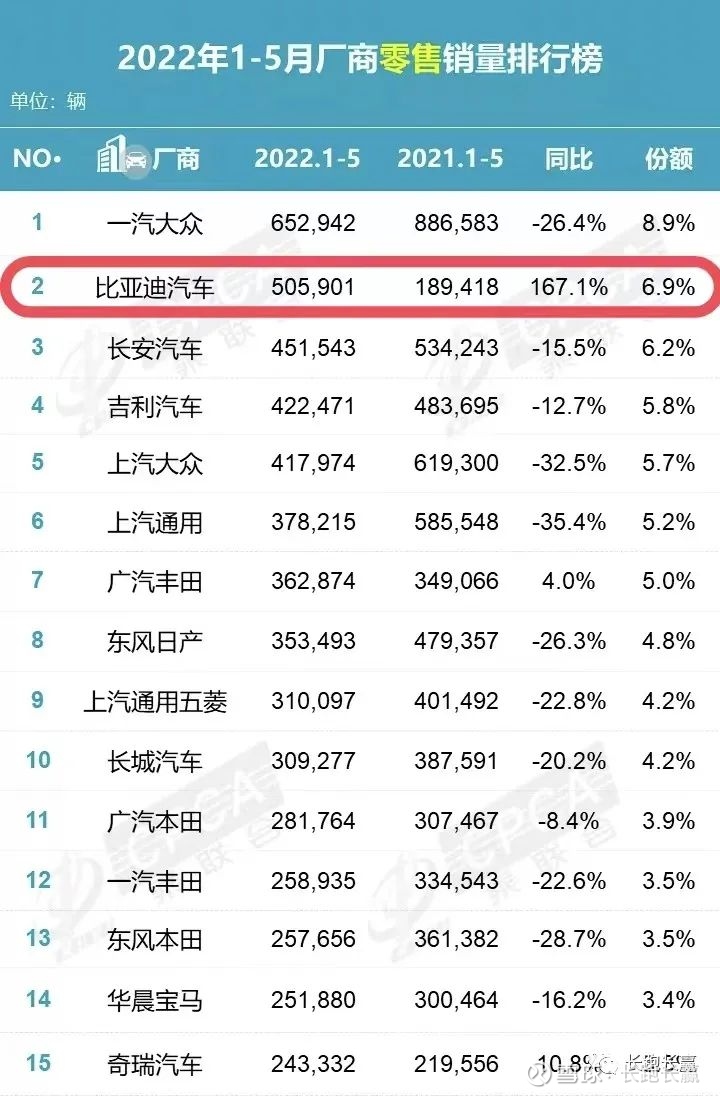 Looking at BYD’s passenger car situation, from January to May, the wholesale sales volume was 509,600 units, and the retail sales volume was 505,900 units, of which 501,200 new energy passenger vehicles were sold . In the next 7 months , based on the increase in production of existing factories and the commissioning of new factories (Shenzhen, Changzhou, Fuzhou, Changsha Yuhua Phase II & Xingsha, Xi’an Phase III, Hefei Phase I, Zhengzhou, Jinan), the production and sales are expected to be 130 -1.4 million , roughly estimated for each month: around 135,000 in June, around 155,000 in July, around 175,000 in August, around 200,000 in September, around 215,000 in October, and 230,000 in November About 250,000 vehicles in December. Therefore, it is predicted that BYD’s new energy passenger vehicle sales in 2022 will be between 1.8 million and 1.9 million, and it will win the double first, that is, the first domestic car sales and the first global new energy vehicle sales.

The second prediction: BYD’s power battery installed capacity will be the world’s largest in 2023

Let’s take a look at the number of batteries installed in May this year. There is no doubt that the Ningde era is still No. 1, and BYD’s No. 2 is nearly half of that of the Ningde era. At present, BYD’s own monthly loading of 114,000 vehicles will more than double by the end of the year, and the loading volume will exceed the level of CATL in May . But there is another point, that is, external supply will increase in volume in the second half of the year, especially since it has been confirmed that it will supply blade batteries to Tesla. less. 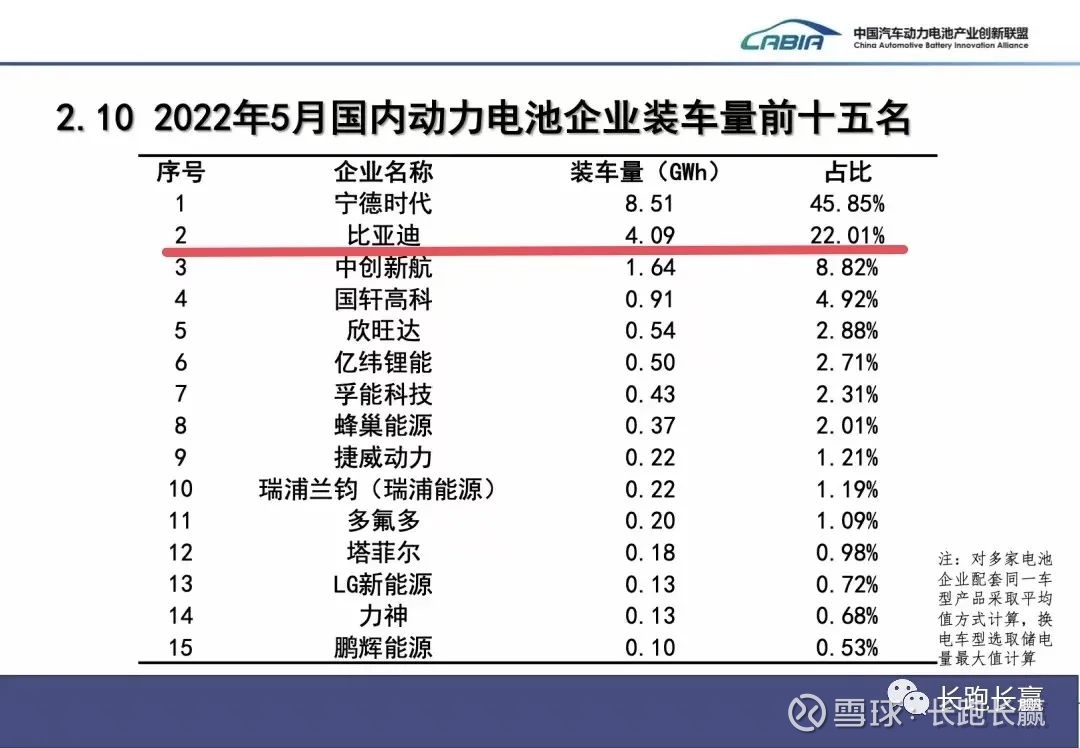 Of course, the Ningde era is not standing still. Judging from the comparison between its May (8.51GWh) and March (10.81GWh), the car companies it supplies have not fully recovered due to the influence of YQ (such as Tesla, etc. ), so further growth will resume in the future. 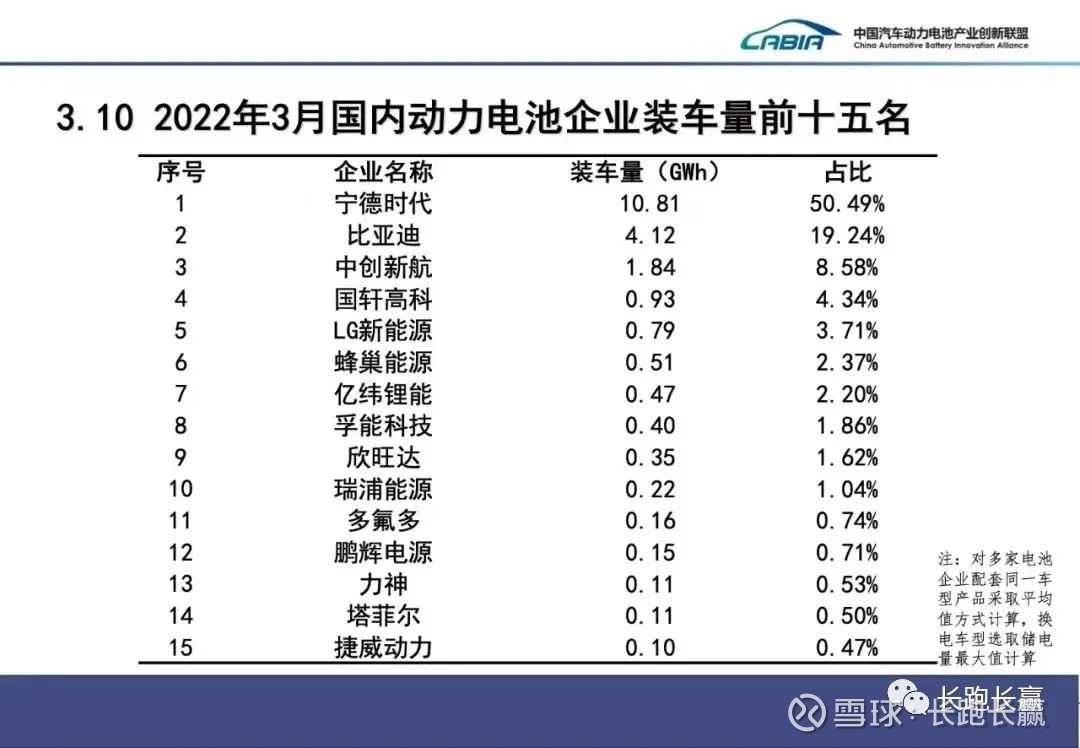 In December last year, it was the month with the highest battery loading in CATL, reaching 14.58GWh in a single month. Of course, there were also reasons for the impulse of car companies at the end of the year. If it is placed at the end of this year, the Ningde era is likely to exceed the amount in December last year. Therefore, it is doubtful whether it can surpass the Ningde era in December this year. It is estimated that it is still relatively difficult. 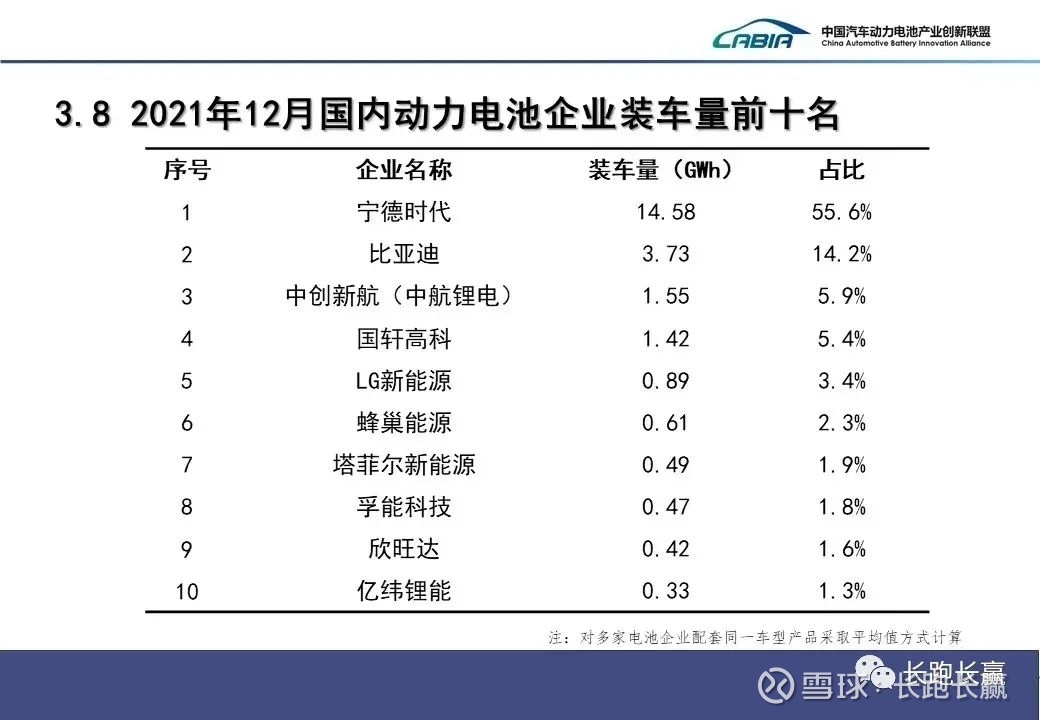 But for 2023, that’s pretty clear. First of all, BYD’s sales target in 2023 is more than 3 million units, and the internal supply itself is a large amount; secondly, the external supply to Tesla, Ford, Toyota and other OEMs (in essence also robbed some Ningde from Tesla) share), this piece is also a relatively large amount. Therefore, from a logical point of view, in 2023, it will be a very high probability that BYD’s battery installation will exceed that of the Ningde era.

The third prediction: BYD’s market value will reach 2 trillion in 2023

At the shareholders’ meeting on June 8, Wang Chuanfu also said that everyone should not worry about profits. With BYD’s scale effect, the entire vehicle (3 million+ units next year) and battery sector can generate a lot of profits, and upstream materials can’t always be at a high level (with upstream production expansion, the price drop is inevitable).

Based on the growth expectations and profit prospects of core businesses such as new energy vehicle sales, batteries (power batteries + energy storage batteries), and the upcoming listing and substantial growth of semiconductors, BYD will initially usher in a substantial increase in profits this year. Growth actually starts next year. At present, logic has actually been recognized by many institutions, otherwise it will not be hot. With the release of BYD’s profit level in the future, BYD will become the standard configuration of more and more institutions. When the monthly sales exceed 300,000 units by the end of next year, the market’s perception will be different from what it is now. That is a figure that many people in China can’t believe. Therefore, with the presentation of strength and changes in cognition, BYD will also have a high probability of seeing a market value of 2 trillion in 2023.

The medium-term forecast before the end of 2023 is discussed above in this article.

For the long-term, BYD’s sales in 2030 should reach the level of 10 million vehicles, not to mention batteries; in addition, the cloud rail and cloud business should have developed very well at that time.

This topic has 73 discussions in Snowball, click to view.
Snowball is an investor’s social network, and smart investors are here.
Click to download Snowball mobile client http://xueqiu.com/xz ]]>