Apple said so, I do not believe so. So after upgrading to the iPadOS 16 developer beta, I tried to use the iPad Pro to communicate, collaborate, write and edit pictures, and review and publish.

Exactly a week as of today, and I have barely turned on my computer for the past 7 days. It’s a cliché, is the iPad really productive? In fact, as long as you think about it a little bit, you will find that the two answers ” iPad is full of productivity” and ” iPad can only be used for watching dramas and playing games” are both wrong.

Productivity is never a black and white issue, after all, everyone’s definition is different – almost all users can use iPad for entertainment and relaxation, but only a small number of users can use it for work and study. 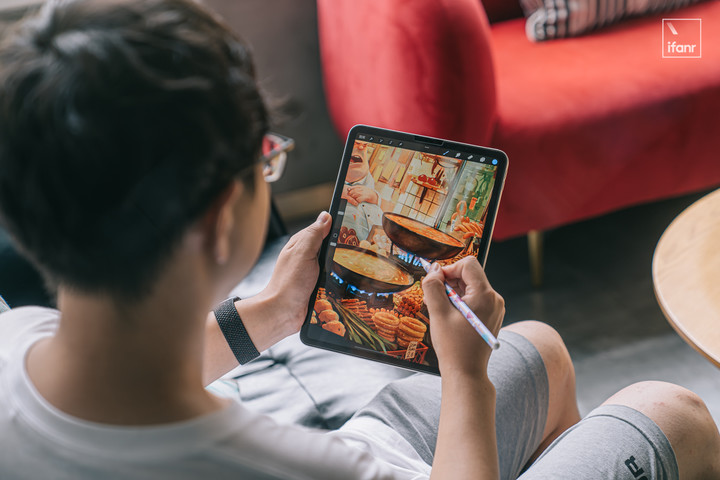 As an editor who is often asked by colleagues “How do you write with an iPad ?”, I am very interested in the front-end scheduling function of iPadOS 16 . After this feature is turned on, you can experience desktop-like multitasking switching on the iPad , or even an external monitor, and open up to eight apps at the same time. 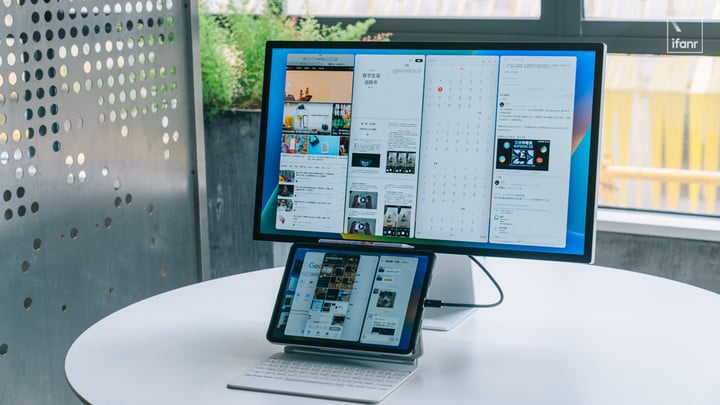 Question time: When you work on your computer, how many windows do you usually open at the same time? My answer is 3. Although there will be apps such as WeChat, reminders, memos, and music in the background, the limit I need to operate the apps at the same time is three. My work does not require several screens, and I watch seven or eight apps at the same time. The demand is not high. Before I upgraded iPadOS 16 , I was already using an iPad for office work and tried an external monitor. I don’t write code or render, and I have few opportunities to cut videos. Even because I’m used to writing in MarkDown , I rarely use the Office three-piece.

But after I used the front-of-stage scheduling function to connect an external monitor, I still sighed: Sure enough, the big screen is the productivity. Although the left and right split screen can meet my work needs, but I can open a few more apps , why not?

The experience of the iPadOS 16 external monitor is almost the same as that of the computer. You can arrange the position of the iPad screen and the monitor screen in the settings, and you can also set the scaling ratio for monitors with different resolutions.

Although iPadOS 16 is still in beta, it can be seen that Apple is working hard to bring iPad multitasking closer to the desktop. For example, when I’m writing in Pages , I can swipe by placing the pointer on an inactive browser, which is not a big feature, but it does improve efficiency.

Sadly, iPadOS 16 doesn’t support turning off the iPad ‘s screen when an external monitor is in use, so you’re forced to use dual screens. In my case, I will arrange the iPad and the monitor up and down. On the iPad , there are apps such as WeChat, reminders, music, etc. that would have been stored in the background. On the monitor, the apps needed for work (such as browsers and Ulysses ) are opened. , and occasionally open an extra memo, so that I can drag the content that I think about every day into Ulysses .

After experiencing iPadOS 16 for a few days, my conclusion is that the front-end scheduling improves the efficiency of those users who are suitable for working with the iPad , but does not add new application scenarios. It is too optimistic to think that the iPad can be reborn with one system function.

However, if you’re already using an iPad to create, trust me, front-of-stage scheduling will make your productivity very noticeable. As the first beta version, iPadOS 16 Beta 1 has many bugs and is full of creativity, and we naturally do not recommend it to ordinary users. Next, I will try not to mention the content related to bugs or adaptation. I believe that these problems will be fixed when the official version is pushed.

So, how many new experiences has it brought me during a week of trying to use only iPadOS 16 for office work?

If you don’t have an external monitor and use an iPad with an 11 -inch screen like me, then I don’t recommend you turn on pre-stage scheduling. With an 11 -inch screen, two split-screen apps are already the limit. Although four apps can be opened in front-of-stage scheduling, the efficiency is not high except for playing when you first get started. ▲ The top is two split-screen apps , and the bottom is the front-end scheduling to open 4 apps at the same time

So my suggestion is, don’t actively turn on the pre-stage scheduling on the iPad , because it will be automatically turned on on the display after the external display is connected.

After connecting to the monitor, the iPad ‘s screen is still the same as before, with split-screen apps and small windows dragging, while the monitor is the front-end scheduling interface, group switching, and multiple sizes. This is exactly what I do with my iPad : Open browser, Ulysses and corporate WeChat on the monitor, split-screen WeChat and reminders on the iPad . You may have discovered that when an external monitor is used, the Dock scheduled in front of the stage is hidden. If you also want to make more comprehensive use of the screen, just enter the control center, long press the scheduling icon in front of the stage, and uncheck it to hide the Dock . . When you need to use it, press “Earth +a ” on the keyboard to call it up, and the work is more immersive. So, what does the front desk bring to the iPad , a bigger screen? That’s true, but more than that.

The main function of front-end scheduling is to manage different apps in groups. After exploring for a week, I have organized three sets of front-end scheduling app groups for my work: the standard work mode ” Safari + Ulysses + Enterprise WeChat” “, the lunch break fishing mode ” B station + VVebo ” and the passionate online mode ” Chrome + memo”, you can quickly switch by just clicking in the group on the left. Next, I will introduce them to you.

The standard work mode, as the name suggests, is my daily work interface for writing manuscripts — for example, now — I use Safari to find information, write in Ulysses , and keep an eye on the work information in the corporate WeChat. The lunch break fishing mode is one of the few situations where I fold the two apps . Watching videos at station B and swiping Weibo with VVebo are mainly used during lunch breaks. But when my mind is exhausted and I want to find some inspiration in the second dimension, I will occasionally open it during working hours (really occasionally). Thanks to the fast switching function, this secret weapon that inspires me, the editor-in-chief has never Find. Passionate online mode, I am an editor who likes to communicate friendly with readers, and replying to comments is a great joy in my work. I have saved the background of the company and WeChat in Chrome , so when I reply to a reader’s comment, I will open Chrome to reply to the comment, and open a memo to record the suggestions and opinions of readers at any time. Although without upgrading iPadOS 16 , I can also use split screen to complete the above work with a little more tediousness (such as more switching screens), but iPadOS 16 , which supports external monitors, not only allows me to complete work more easily on a large screen, There’s also an iPad screen that’s always on call: On the iPad screen below, there’s Apple Music and Today’s Plan. With the front desk scheduling, I still owe a little wind before I use the iPad completely: that is file management. Admittedly, the iPad ‘s file management is nothing compared to the desktop, even with the upgrades. Fortunately, a little bit of exploration was required to find a solution that barely worked.

The computer desktop is, to put it bluntly, a folder full of files and shortcuts. In this case, I just need to open the “File” app , create a new “Desktop” folder in “My iPad “, and then put the required files in the “Desktop”, so that when processing files and pictures, Compare pictures, edit and crop. Is it enough? No, although you can do this, you still need to wait for the app to adapt. My commonly used photo editing app Pixelmator Photo only supports importing pictures from the system “Photo” app (or I didn’t find the right way?) File > app import, it will definitely make a copy in “Photos”. ▲ Open the Pixelmator Photo of the picture through the photo app

However, Affinity Photo , which can compete with Photoshop , does not yet support the front-of-stage scheduling function, and it cannot display full-screen displays or open pictures on the iPad screen.

But trust me, as long as the app is adapted, we can use the iPad ‘s screen as a desktop folder and perform various operations on an external monitor. The reason I believe so strongly is that Lumafusion , the already adapted video editing software, can really edit videos in this way. If you’re a Final Cut Pro user, LumaFusion should allow you to find a little bit of the former. The material area, preview area, timeline, and effect editor that can be accessed by double-clicking the material, from material processing, audio modification to video color grading, although the sparrow is small, it has all the internal organs. It supports importing materials from “File”, which perfectly fulfills my need for cross-screen video editing. Although Lumafusion only supports up to 6 video tracks and 6 audio tracks, it is more than enough for daily new media work needs.

For me, today’s iPadOS 16 is fully capable of my writing needs and video editing needs. Although image processing is barely usable, it still has to wait for third-party apps to adapt.

During the week of working with iPadOS 16 , of course, I not only used the function of front desk scheduling, but there are two functions that I like very much.

For example, at the end of the introduction of iPadOS , there are a few pages of Keynote with a lot of text, and I can pause the video and copy it directly for use in other places.

The other is the photo album cutout function. I am making a note book recently, and I have taken a lot of plant photos. Using it, I can quickly cut out the plants in the photos, which makes my notes a lot more refined.

The update of Safari browser, mailbox, search, and messaging apps has also improved my efficiency, but it is naturally not as bright as scheduling before going on stage.

So why don’t I use a MacBook Air ?

You have an external monitor, so why not use a MacBook ?

Looking back at WWDC22 , one word that left a deep impression on me was ” also “ . macOS Ventura and iPadOS 16 , from front-of-stage scheduling to smart collaboration to updates of various details, are almost the same – Apple is erasing the distinction between devices.

Maybe next year, we will see the question on the Internet that “the price is about the same, should I choose iPad Pro or MacBook Air “, and hear the remarks of “I have an external monitor, why not choose iPad Pro “. ▲ You see, the introduction pages are almost the same

Today, when the iPad is turning, what can you do with iPadOS 16 ?

This article is reprinted from: https://www.ifanr.com/app/1495356
This site is for inclusion only, and the copyright belongs to the original author.