Ali’s financial statements from January to March 2022 included a “revenue” of 12.683 billion yuan. 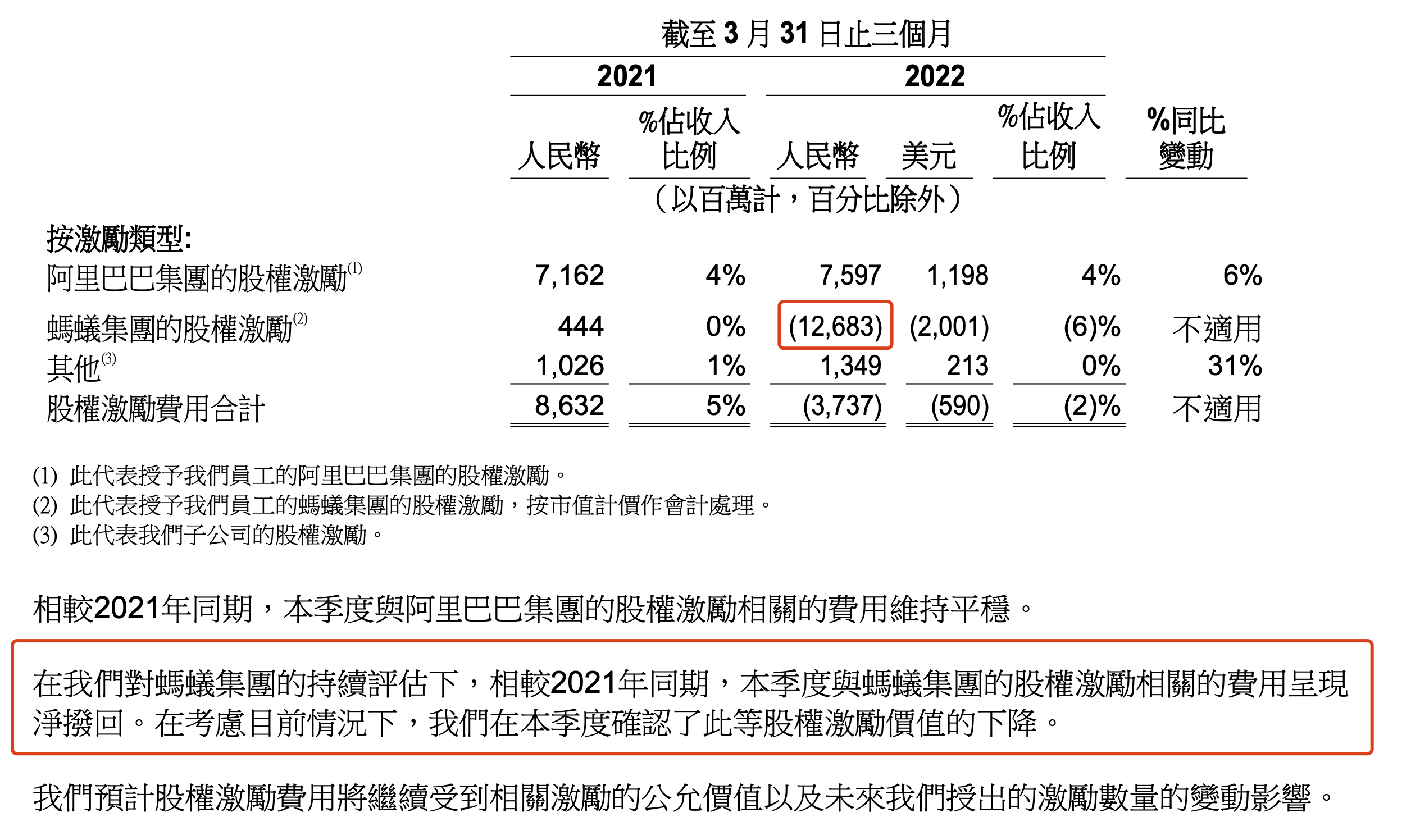 The cost of stocks given to employees by the company is often lower than the price in the stock market. For example, the cost for employees to obtain stocks is 10 yuan/share, but the market price is 100 yuan/share. The company will account for -90 yuan per share of equity incentive incentive value expenses, although the company did not spend 90 yuan.

This is also why Internet companies that give employees more options are mostly accompanied by a surge in expenses when they go public. The options that a large number of old employees got at a low price will be converted into stocks and become a financial expense.

Before Ant’s unsuccessful IPO, Ali had already recorded the cost of Ant’s equity incentives held by employees according to the new valuation at that time, so there was an incentive fee of 16.056 billion yuan in the September 2020 quarterly report.

This is what almost all large companies do before going public. The “return” of 12.683 billion yuan now also reflects Ali’s new adjustment to the value of Ant Group’s stock. However, whether the incentive fee is increased or refunded in the scale of 10 billion yuan, it does not completely correspond to the adjustment of the valuation.

A lawyer in the technology field who has helped Alibaba employees deal with options matters many times explained to us that this move means that Alibaba has adjusted its assessment of the value of Ant Group based on the current market environment, but it cannot directly conclude that the value of Ant’s stock has shrunk.

This is like Ant Group’s valuation of 2 trillion yuan, but Ali felt that it should only be worth 500 billion yuan, and made corresponding financial treatment. However, changes in Ant’s valuation can only be reflected when the stock is listed and sold.

“As long as the employee does not exercise the right and sell it, there will be no actual income, and the impact is actually difficult to say. Strictly speaking, the employee will see the market value at that moment when realizing it in the future.” The lawyer said. The impact on Ant Group’s employees has been largely dashed expectations, which already happened when the 2020 IPO was aborted.

The CFO of a US-listed company also expressed a similar view to us, that is, according to the explanation of Alibaba’s charge back to Ant’s equity incentive fee, it can be considered that Alibaba has lowered Ant’s valuation, but it cannot reflect the specific reduction in Ant Group’s valuation. It is impossible to quantify the extent to which the wealth of Ant Group employees has shrunk.

Ant Group officially announced its preparations for listing in August 2020. The IPO was suspended on the eve of the bell in November , and then rectified according to the requirements of the regulatory authorities, increased capital , controlled the scale of credit, returned to the source of payment , and established a consumer finance company to undertake installment and small loan business. In March this year, Ant Group announced dividends for the first time. According to the dividend of 3.94 billion yuan receivable by Ali, the total dividend of Ant is about 10 billion yuan.

An employee who left Ant but still has options confirmed to us that he received a bonus as an employee for the first time this year. (Gong Fangyi)

Wenzhou adds leverage, and does not charge principal for the first three years of the mortgage

Wenzhou, which is often linked to “real estate speculation”, has now made a bolder attempt to buy a house with a loan.

Wenzhou Housing and Urban-rural Development Bureau has reached a cooperation with Huaxia Bank Wenzhou Branch, and the latter will provide repayment methods such as “interest first and then principal” or “a small amount of principal plus interest” to first-time home buyers with a loan term of ten years or longer. If the leverage is increased to the maximum, only interest can be paid for the first three years, and the principal will be paid from the fourth year.

Han Kun Law Firm specializes in private equity and venture capital, mergers and acquisitions, domestic and overseas securities issuance and listings. Clients include most Chinese Internet companies such as Alibaba, Tencent, Baidu, and Meituan. It has participated in most Chinese Internet listings in Hong Kong and U.S. stocks and mergers and acquisitions of most Internet companies, such as the merger of Meituan and Dianping, the merger of Tongcheng-Elong, and the merger of Ele.me with Baidu Waimai, etc.

Amid geopolitical conflicts, relatively neutral Singapore is becoming an influx of capital and new companies. Li Ka-shing’s Victoria Harbour Investments announced the establishment of an office in Singapore to seek new transactions, after Dyson’s founders James Dyson, Ray Dalio and others set up family fund offices in Singapore. It is understood that many Chinese venture capital investment institutions including Shunwei have also set up new bases in Singapore in recent years to expand their business. (He Qianming)

Forever 21 entered China for the third time, and the industry is generally not optimistic

Kweichow Moutai held a shareholders’ meeting on the 16th and announced a target revenue of 125.9 billion yuan in 2022, an increase of 15% over the previous year, the highest growth target since 2020. Last year, Moutai’s revenue grew by 11.7% year-on-year, with a total profit of 74.5 billion yuan. The management also mentioned that i Moutai, which was launched at the end of March, has 17 million registered users and has achieved revenue of 3 billion to 4 billion yuan.

According to the Passenger Car Association, from June 6 to 12, the nationwide retail sales of passenger vehicles was 349,000, a year-on-year increase of 25% and a 54% increase from the previous month; the cumulative retail sales from June 1 to 12 were 519,000, a year-on-year increase of 14%. The analysis believes that the effect of the policy of halving the purchase tax of fuel vehicles, which was implemented this month, has begun to show, and the tax reduction may drive the sales of 2 million vehicles. However, it may also be that some of the suppressed car buying demand has been released. Like Shanghai, the sales of new cars in April were 0.

The National Bureau of Statistics reiterated that it will rectify the falsification of local statistical data.

The three major airlines’ passenger and cargo volumes declined year-on-year in May.

Vietnamese officials announced that the domestic aviation market is recovering the fastest in the world.

According to the Vietnamese government announcement, data shows that Vietnam’s domestic aviation market has recovered the fastest in the world, surpassing the level before the epidemic. Up to now, the number of passengers received by airports nationwide is 40.7 million, a year-on-year increase of 57%, of which 1.8 million are international passengers, an increase of 905%.

GM wants to hand-build a Cadillac electric car for more than $200,000.

General Motors recently said it would invest $81 million in equipment to hand-build (and also rely on machines) its upcoming Celestiq, Cadillac’s new flagship electric car, in a limited production run of several hundred units a year, priced at $200,000 or more. Celestiq is expected to use hundreds of 3D printed parts and is expected to go on sale in 2025.

Kroger beat earnings estimates and expects to save $1 billion this year from automation.

Kroger, the second largest retailer in the United States, achieved sales of $44.6 billion in the fiscal quarter ended May 21, a year-on-year increase of 3.8%, and a net profit of $664 million, both better than expected. Although also affected by inflation, profit margins fell by 1 percentage point year-on-year, but automation technology is expected to save about $1 billion in costs this year. Consumers are also starting to buy more affordable supermarket private labels, which are more profitable for Kroger.

Bill Gates: NFTs are 100% based on Bo silly theory.

Bill Gates talked about his views on NFTs when he attended an event a few days ago, “It’s incredible that expensive digital images of monkeys will greatly improve the world”; NFTs are “100% based on Bo stupid theory” people who buy it believe , someone will pay more for it; I prefer “a productive farm or a company producing a product”. Bill Gates currently has 242,000 acres of farmland worth $690 million and is the largest private farmer in the United States.

The number of monthly active users of YouTube short videos has caught up with TikTok, but the user time is still far behind.

Google announced Wednesday that its short-video product YouTube Shorts has more than 1.5 billion monthly active users, the same size as TikTok (1.6 billion). But that doesn’t mean victory. According to a report by LatePost in April this year, the former has about 300 million daily active users, and TikTok has more than 700 million, and the user usage time is several times that of its competitors. In addition, YouTube is also facing an innovation dilemma – the more embedded short videos account for user time, the more monetization of its core long video creators will be affected.

In 2021, total private investment in artificial intelligence will be about $93.5 billion, more than double the previous year, but the number of newly funded companies has dropped by 14, according to Stanford University’s 2022 Artificial Intelligence Index report. This means that AI investment has reached an advanced stage. The report shows that in 2021, there will be 15 funding rounds worth more than $500 million, up from four in the previous year.

The title picture comes from the movie “The Theory of Everything”

This article is reprinted from: https://www.latepost.com/news/dj_detail?id=1184
This site is for inclusion only, and the copyright belongs to the original author.