“Are you busy with this?”

Cloud Imperium Games (hereinafter referred to as CIG), the developer of the most popular game “Star Citizen” in history, once drew a very good cake for players – they will launch a game with the same world view as “Star Citizen”. , the story-rich stand-alone game “42 Squadron” (Squadron
42). CIG has done a lot of publicity for the game, the preview and the actual machine demonstration of the alpha test told people that this first-person space exploration is very promising, so that more people will not hesitate to pay for this new unknown plan, but it was originally scheduled for 2019. The online beta test was pushed to 2020 for some reason. After that, the official postponed it again and again, and as a result, players never saw the follow-up of the work again.

At the beginning of 2022, people finally ushered in the official new news about the game-COO Carl Jones clearly told everyone in a media interview to “wait another year or two”, and no one mentioned that B test again. A few months later, the official released a progress report on the update of “42 Squadron” as usual, which accidentally angered the players who were already angry – this update emphasized a content refinement about AI: when the character is in the Sleeping areas, getting in or out of the quilt, or other activities, new content researched by the official AI team will deform the sheets to increase the player’s immersion.

A stand-alone game that was developed by crowdfunding and was originally scheduled to meet you in 2022 is now hard to see in real life. Where the game is developed and what research is being carried out depends on the official mouth to describe it. Now, in the eyes of the majority of players who are looking forward to “42 Squadron”, CIG is asking people to be patient while slowly studying the texture of the sheets with the team, which is hard not to raise blood pressure. 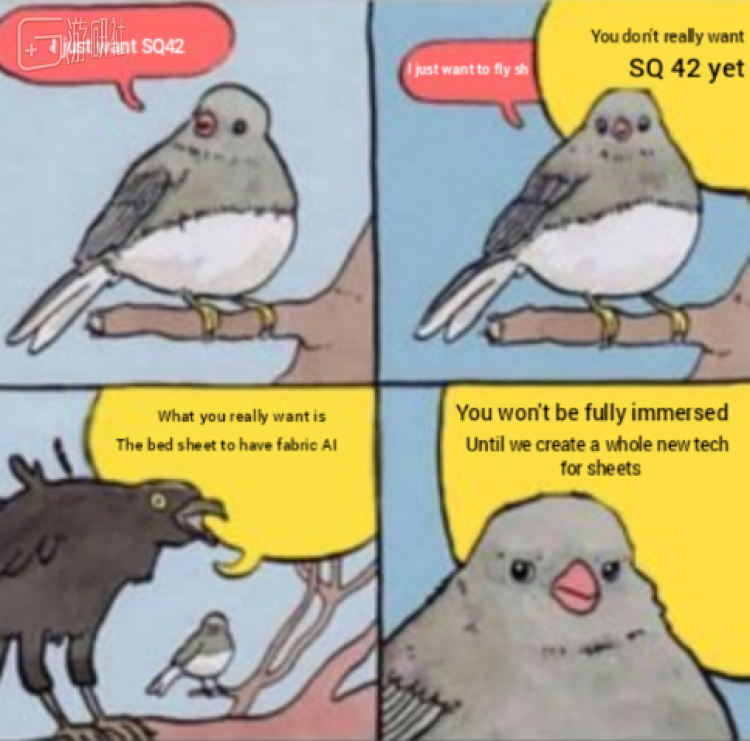 It’s official: You can’t immerse yourself in a Squadron 42 game until we’ve got the bedsheets fully tactile! “

So the player community exploded and scolded one after another. Many people didn’t understand that the game should have been made long ago. Since it hasn’t been made, shouldn’t it step up its progress now? Why is CIG still showing off happily? bed sheets?

Or to say that the promise is delayed for ten years because of wasting effort in these useless places.

“It’s the ultimate in useless effort”

Some people also said that everyone was a little overreacted. Although the official told everyone at the beginning of this update log that they had made technical breakthroughs in this regard, this is just an ordinary update log, which does not mean that CIG really used all its manpower. on the sheets.

In fact, things are not as complicated as everyone complains. So far, the entire “Star Citizen” has crowdfunded more than 450 million US dollars. When the project started, the reason why players bought it so much was actually aimed at the game producer Chris.
Roberts’ fame and ambition. Chris Roberts’ famous work “The Flying Commander of the Galaxy” once opened the door to cosmic hardcore games and continued the interstellar dream brought to the world by “Star Wars”, and old players will never forget it. Today, “42 Squadron” is regarded as the spiritual sequel to “The Galaxy Flying General”. From the preview, we can see that Chris Roberts paid tribute to “The Galaxy Flying General” – in the 66-minute real machine demonstration announced in 2017, in the same year Mark Hamill, the actor of “Luke Skywalker” who starred in the live action in “The Flying Commander of the Galaxy 3”, contributed a face model this time and appeared again as a virtual image, which can be said to be full of emotions. When the driver goes back to his bed to sleep, it is also one of the game settings of “The Flying Commander of the Galaxy”, which uses the first-person operation and driving of the spacecraft as a selling point. In Star Citizen and Squadron 42, which has not met the players, the “bed” has become an indispensable design, and it belongs to the content that can be judged as “no inner taste” if it is not present. To a certain extent, the official start of the progress report with the deformation of the bed sheet may actually be just an emphasis on feelings. But times have changed. After all, not all players who invest in games today come for the feelings of the past. What’s more important is that over the years, CIG has not been able to produce the works that the players want in a timely manner, and it is inappropriate to make such a split reaction when the player is most concerned about the progress of the game, so the player’s reaction is more reasonable. among.

This article is reproduced from: https://www.yystv.cn/p/9116
This site is for inclusion only, and the copyright belongs to the original author.