Bridgewater, the world’s largest hedge fund, is cautious about its economic outlook, with CIO Greg Jensen predicting a downturn ahead.

In an interview with the Financial Times on Wednesday, he said:

We are in a completely different world. We are approaching an economic slowdown.

He expects inflation to increase pressure on the Fed to raise rates unexpectedly. But he added that the Fed will still tolerate inflation above its 2% target because policymakers can’t stand the brutal stock sell-off. The latest consumer price index will show inflation remains above 8%.

Jensen believes that if the Fed does cut inflation to its 2% target, stocks could plunge 25% from current levels as tightening has to become more aggressive. He says:

That would damage the economy and potentially hit weaker companies.

Slowing the economic expansion to rein in high prices will require an aggressive stance from the Fed, which Jensen said would drain liquidity in financial markets. He explained:

Mohamed El-Erian, dean and economist at Queens College, Cambridge, echoed a similar sentiment on Wednesday, warning that the U.S. economy would either sink into stagflation or fall into stagnation as the Fed flooded markets with too much liquidity during the pandemic. decline.

Julian Emanuel, chief equity and quantitative strategist at Evercore ISI, took a more pessimistic view on the U.S. economy, arguing that soaring energy costs could send U.S. stocks down another 30%. 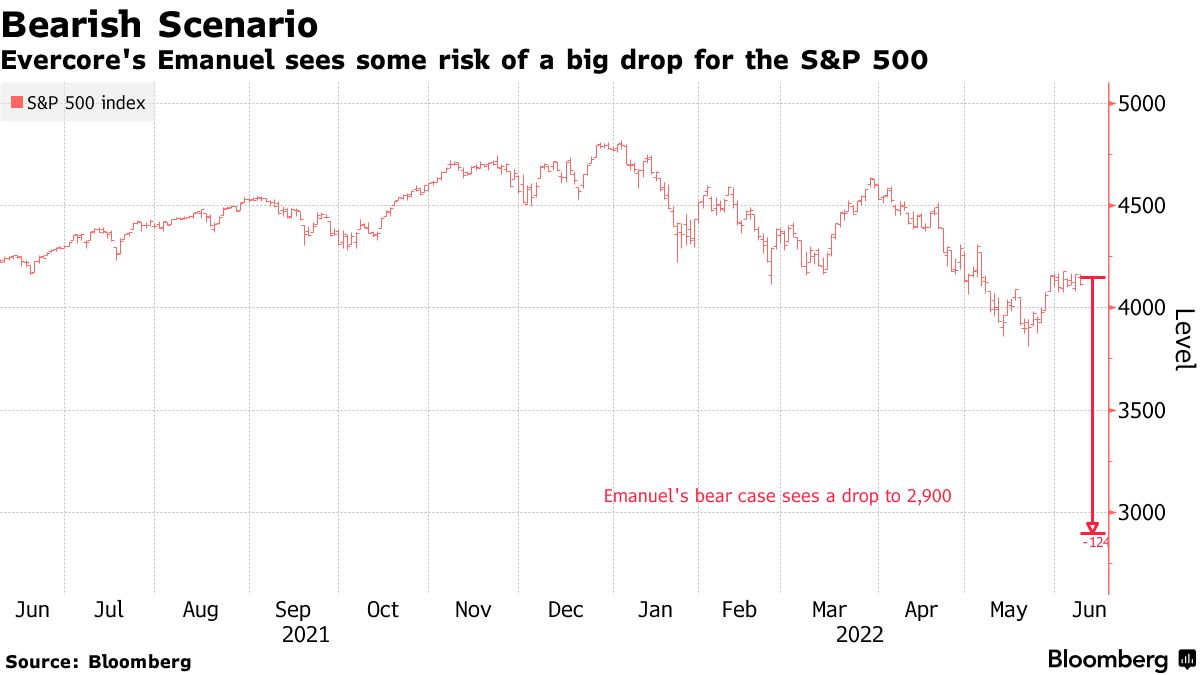 In an interview with Bloomberg Television on Thursday, Emanuel said:

Higher oil prices “have historically increased the likelihood of recessions,” Emanuel wrote in a note Wednesday, adding that “recessionary bear markets” over the past century have averaged about 41% declines.

Few forecasts for the stock market are so worrying, and the current situation is extraordinarily complicated: the highest inflation in 40 years, the Federal Reserve’s sharp rate hikes and the Russia-Ukraine conflict.

The S&P 500, which is down nearly 14% so far this year, has faltered a rally that began in mid-May as warnings about the economic outlook and falling corporate profit margins have grown sharper.

Concerns have begun to arise over whether we’ll see more downgrades ahead of earnings season in July, a trend that could intensify once earnings season begins. People will definitely become more cautious.

Emanuel believes the S&P 500 is on track to hit 4,800 this year if price pressures ease. But that’s a pretty high bar given Friday’s report expects U.S. inflation to stay above 8%. He says:

If inflation is contained and consumer spending is contained, that’s where we get the upside.

The relief rally did little to improve the long-term downside for the major indexes.

This article is reprinted from: https://news.futunn.com/post/16323649?src=3&report_type=market&report_id=207863&futusource=news_headline_list
This site is for inclusion only, and the copyright belongs to the original author.