The US CPI in May increased by 8.6% year-on-year, reaching a new high; the core CPI increased by 6% year-on-year, also higher than expected. In terms of sub-items, prices of almost all important items are increasing, indicating that the endogenous driving force of inflation is strong. If the CPI in June continues to rise at the current month-on-month growth rate, the inflation level will be even higher.

We believe that the record high inflation poses a major challenge for the Fed. If it wants to control inflation, more aggressive monetary tightening may be required, and a tighter monetary policy will increase the downward pressure on the economy and increase the probability of recession. One possibility is that the Fed would have to trade a recession (a “hard landing”) for price stability, recreating the “Volcker moment” of the year. This also means that the adjustment of overseas capital markets has not ended, and the double killing of stocks and debts is still the main theme. 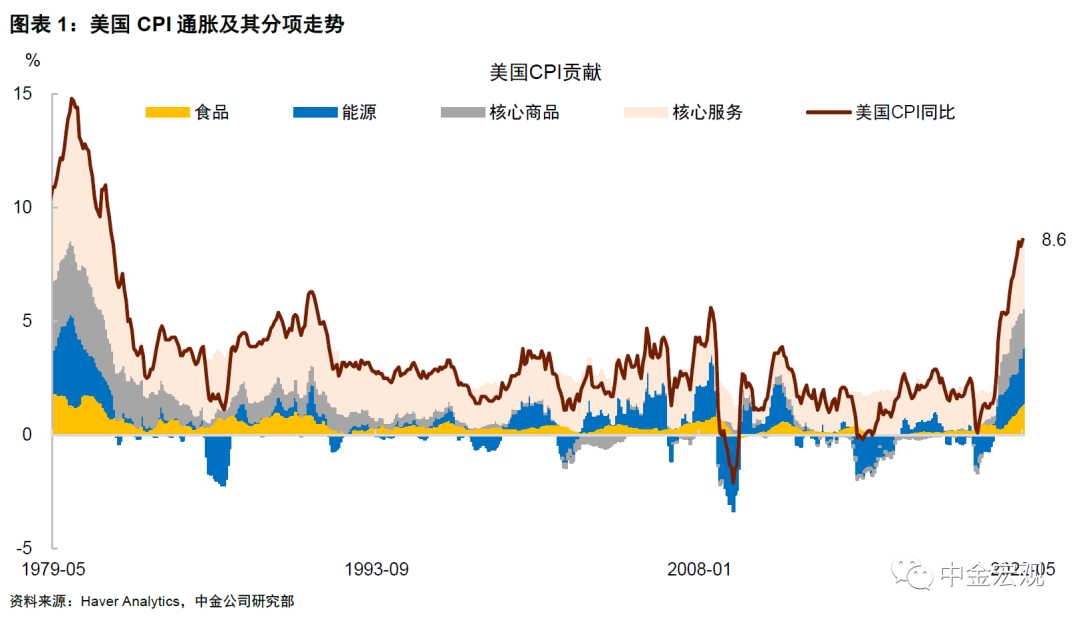 First of all, the CPI inflation in May was a “general increase”, and the price increases of the four major sub-items of food, energy, core commodities and core services rose across the board.

In terms of core commodities, the prices of travel commodities are still resilient, and the prices of home commodities have cooled. The prices of new cars (1%) and used cars (1.8%), which contributed more to inflation in the previous period, remained firm, while the prices of clothing and clothing (0.7%) continued to rise. In contrast, prices of furniture and bedding (-0.2%), home appliances (-0.7%), computers (-1.4%), smartphones (-5%), etc. fell back, reflecting consumer demand for these goods It has cooled down a bit.

In terms of core services, the month-on-month growth rate of rents rose to 0.6%, of which the landlord’s equivalent rent (0.6%) and the main residence rent (0.6%) both maintained a relatively high month-on-month increase. Rent accounts for 32% of the U.S. CPI basket, and it has a strong stickiness. If the monthly growth rate can still be maintained at around 0.5% in the future, it will form a continuous support for core service prices. In addition, air ticket prices rose by 12.6% month-on-month, indicating strong summer travel demand. With rising wages, the prices of some labor-intensive services, such as household services (2.1%), medical services (0.4%), and recreational services (0.5%), are “rising.” Given the resilience of rent and wage inflation, we expect core services to be the most important factor in supporting U.S. inflation going forward.

We pointed out in our previous in-depth report “U.S. inflation, what happens after the inflection point?” that the persistence of this round of U.S. inflation should not be underestimated. Looking ahead, assuming that the month-on-month growth rate of US CPI in June remains at the level of May, the year-on-year growth rate of CPI in June will further increase to 8.7%, which is even higher than that in May, while the core CPI will also remain at 5.8%. high.

One possibility is that the Fed trades a recession (a “hard landing”) for price stability, recreating the “Volcker moment” of the year. In the early 1980s, Volcker, then the chairman of the Federal Reserve, did not hesitate to sacrifice short-term economic growth in order to curb excessive inflation. The U.S. economy fell into recession twice in 1980 and 1981, in exchange for the end of the era of high inflation. In hindsight, Volcker’s success lies in his resolute attitude to curb inflation and the correct understanding that currency excess is the source of high inflation. Now that Powell wants to curb inflation, he may need to emulate Volcker back then and be more aggressive in monetary tightening.

After the inflation data was released, U.S. stocks fell sharply. The yield on the 10-year U.S. Treasury bond exceeded 3.1%, and the yield on the 5-year and 30-year U.S. Treasury bonds inverted, showing the market’s concerns about the economic outlook. The inversion of U.S. bond interest rates is usually regarded as a leading indicator of economic recession. Although the market is divided on which term to use to calculate the inversion, the inversion will increase the market’s concerns about the economic outlook and restrain investors’ risk appetite. We believe that from this point of view, the adjustment of overseas capital markets has not yet ended, and the double decline of stocks and bonds is still the main theme. In addition, the May University of Michigan consumer confidence index (preliminary value) released on Friday fell to 50.2, the lowest since 1980, showing that consumers’ aversion to inflation has been very strong. We believe that negative consumer sentiment not only affects their spending behavior, but may also reduce the probability of Democrats winning the midterm elections in the second half of the year.

This article is reprinted from: https://news.futunn.com/post/16347808?src=3&report_type=market&report_id=207911&futusource=news_headline_list
This site is for inclusion only, and the copyright belongs to the original author.