Finally, the first batch of key enterprises in Shanghai began to resume work.

In fact, prior to this, ensuring the normal operation of key industries in Shanghai during the epidemic was an issue the government was considering. Wang Jiangping, Vice Minister of the Ministry of Industry and Information Technology and head of the Shanghai Front Working Group, held a video conference to study the establishment of an emergency coordination mechanism for industrial chain supply chain demands, establish a “white list” of key enterprises in the industrial and information technology fields, and concentrate resources to give priority to guaranteeing integrated circuits and automobiles. 666 key enterprises in key industries such as manufacturing, equipment manufacturing, and biomedicine have resumed work and production. 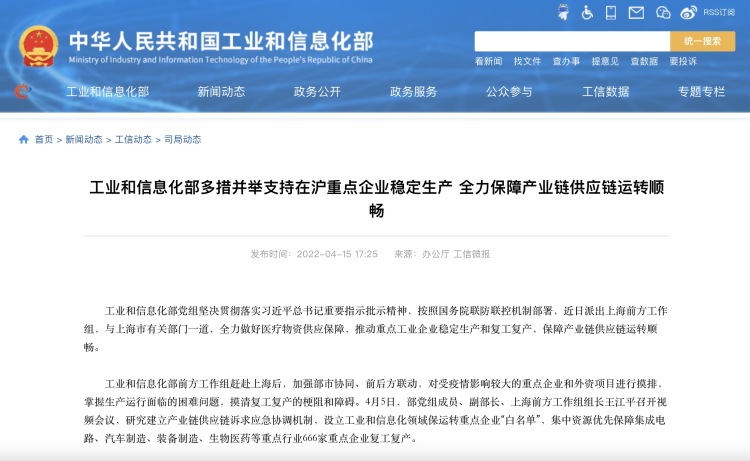 Among these 666 key companies, semiconductor companies have attracted much attention. From chip design to wafer foundry to chip packaging and testing, as well as chip materials and equipment, they basically cover the entire semiconductor industry chain and many well-known semiconductor manufacturers at home and abroad. . For example, SMIC, Hua Hong, Jaita Semiconductor, ASML, Applied Materials, Fanlin Semiconductor and so on.

The semiconductor industry chain is finally beginning to have more certainty.

It’s not easy to get back to work

Wafer fabs such as SMIC and Hua Hong have a high degree of automation in wafer production due to their special working environment, and require a highly clean clean room in the working area, so as not to affect the yield of chips, so only a small number of parts are required. Staff wearing fully enclosed dustproof clothing have less risk of transmission and infection. Such enterprises have already begun to implement closed-loop production to ensure the stability of the domestic semiconductor industry chain.

Shanghai-based chip design companies such as Weir, Jingchen, and Zhongying Electronics mostly keep their employees working remotely online. Although the overall R&D efficiency will be affected to some extent, they can basically maintain the normal operation of the company. Minsheng Securities said that many chips The design company’s products are sent directly from the packaging and testing manufacturers, and the company’s warehouse inventory flow is basically unaffected.

The situation of packaging and testing manufacturers in Shanghai is not so optimistic. Packaging and testing companies such as Amkor, ASE Shanghai, and Ziguang Hongmao are different from wafer factories. Packaging and testing factories are labor-intensive factories, and their production and manufacturing processes require more manpower. It is also more directly affected by the epidemic. For example, during this period, Amkor had several cases of infection of employees in the Waigaoqiao Free Trade Zone, which led to the temporary suspension of the factory for disinfection and employee nucleic acid.

According to many local media reports in Shanghai, although many semiconductor companies have begun to resume work before, but because the above-mentioned companies are closed-loop production, the entry of raw materials into Shanghai and the export of finished products have become the biggest difficulties, which makes the resumption of work and production of semiconductor companies in Shanghai difficult. It is integrated into China’s semiconductor industry chain, which is why Yu Chengdong, CEO of Huawei’s consumer business and smart car BU, said that if Shanghai continues to be unable to resume work and production, after May, all technology/industrial industries involving Shanghai’s supply chain will be fully integrated. Stop production, especially in the auto industry. 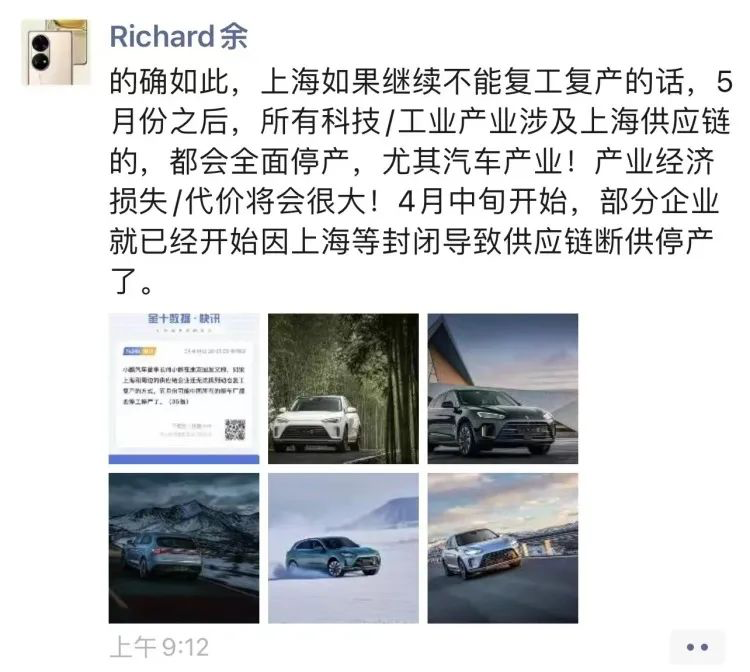 In response to these situations, the Shanghai Municipal Commission of Economy and Information Technology has cooperated with the Ministry of Industry and Information Technology, the Ministry of Communications and other departments. The working group has penetrated into the leading enterprises in the semiconductor industry chain, and coordinated and resolved key raw material inventory alarms in a timely manner through point-to-point, one-to-one, short-term and fast methods. and other urgent issues affecting stable production.

In addition, the challenge for “whitelisted” companies to resume work is the return of employees – some companies have limited employees who meet the conditions for resumption of work. A person in charge of Daimei, an auto interior parts company, said: “We counted overnight last night and found that less than 40% of employees can meet the working conditions (the building and myself have been negative for seven consecutive days).” 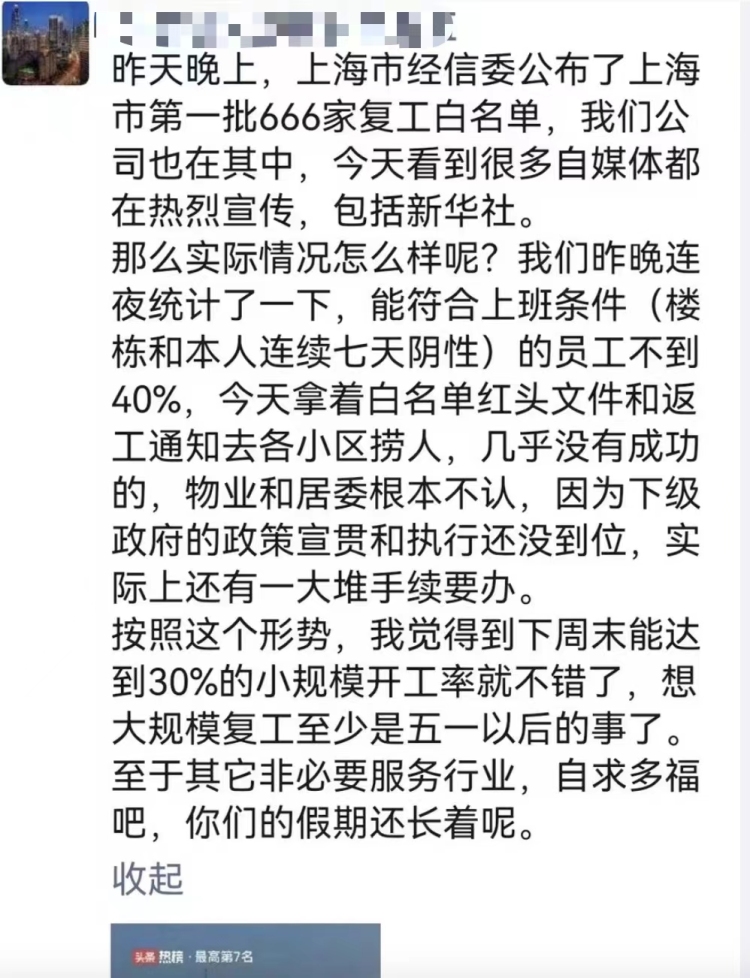 Secondly, in terms of the status of the semiconductor industry chain, Shanghai is one of the regions with the highest comprehensive semiconductor technology level in China. Among the top ten wafer foundries in the world, mainland China occupies two places, namely SMIC and Hua Hong Semiconductor, both of which are located in the Pudong New Area of ​​Shanghai.

In addition, in the design industry, Shanghai has Spreadtrum Communications, Geke Microelectronics, Leadcore Technology, and Shanghai Fudan Microelectronics. The domestic lithography machine leader Shanghai Microelectronics and the etching machine leader Zhongwei Semiconductor are also located in Shanghai. Not to mention, Shanghai Xinsheng, Shanghai Silicon Industry, Ruidike and other powerful domestic old-fashioned semiconductor companies. Looking at the world, a large number of international semiconductor giants basically have branches or offices in Shanghai. Jiang Shangzhou (former chairman of SMIC), who helped Zhang Rujing return to China to found SMIC, once had a bold statement: “In the future, Shanghai will likely surpass Taiwan in terms of integrated circuit production.”

After 2000, with the maturity of China’s market economy and the transfer of the international semiconductor industry chain, Shanghai’s semiconductor industry has ushered in new development opportunities. In April 2000, SMIC was established in Shanghai; in February 2002, the National Integrated Circuit Design Shanghai Industrialization Base was established, and well-known companies such as NVIDIA landed; in 2004, TSMC’s first 8-inch production line in the mainland settled in Songjiang; 2005 In September, Intel Asia Pacific R&D Center settled in Shanghai.

In 2001, Wu Ping, Chen Datong and Fan Renyong returned from Silicon Valley to establish Spreadtrum Communications (Spreadtrum Communications and RDA Microelectronics were officially merged into UNISOC in 2018), and my country’s baseband chips have reached the international leading level. In 2003, Zhao Lixin returned to Shanghai from the United States and founded Geke Microelectronics, which opened up the market for my country’s image sensor chips. In 2004, Dai Baojia and Wei Shuran founded RADICO in Shanghai, and its “Little Smart” radio frequency chip is famous all over the country…

By 2021, Zhang Ying, deputy director of the Shanghai Municipal Commission of Economy and Information Technology, pointed out that the scale of Shanghai’s integrated circuit industry has reached 250 billion yuan, accounting for 1/4 of the national integrated circuit scale. Shanghai has become the second province in the domestic integrated circuit industry. It is second only to Jiangsu Province, which has major semiconductor towns such as Nanjing, Wuxi, and Suzhou. How important is the semiconductor industry in Shanghai, and how serious the impact of the epidemic on the industry chain is, which is why integrated circuits are ranked first among key industries in the Ministry of Industry and Information Technology’s documents.

Epidemic, water shortage, blizzard, geopolitics, leakage of harmful substances… The global semiconductor industry has often been impacted by various reasons in recent years, which has brought severe pain to the upstream and downstream of the industry, but on the other hand, this In fact, the entire industry has a high sense of crisis and a certain ability to withstand pressure. For example, each factory has its own inventory cycle and the global division of labor in the semiconductor industry chain, so that eggs are not put into one basket. At present, all enterprises and governments in Shanghai are using their own methods to stabilize production and ensure supply chains. Before the damage to the entire semiconductor industry chain is not as extreme as Yu et al. said, they have begun to bring some stability to the fragile chain.

This article is reproduced from: https://readhub.cn/topic/8fmmAkF9f08
This site is for inclusion only, and the copyright belongs to the original author.