The picture below shows the yield of a friend of mine this year – 5.97%. After a loss of 6 points, it still outperformed the Christian Democrats by 83% . It is estimated that 0% of the short positions will outperform by 90+%!

It seems that everyone has not made any money this year.

Closer to home, this year, I really did not expect that the callback will be so long and so much.

I really didn’t expect so many bad things to happen this year~~ I wanted to delete the APP and run away for a while.

So after a lot of ideological struggle, I finally convinced myself that I did not clear the position, nor cut the meat to lighten the position, and then plucked up the courage to set a fixed investment and continue to increase the position. .

That’s how I convinced myself. (The following is my real mental journey during this period of time)

1 First ask yourself: Besides buying funds, do I have any other options that can preserve and increase the value of my assets?

My answer is: there is no other option.

It is impossible for me to buy a house and invest now, the leverage ratio is too high, the liquidity is too poor, and the certainty of future appreciation is not clear.

I can’t open a physical store. Although I once thought about opening a store, I felt that there was running water every day, but the cost was really too high, and once there was a mistake, it was not a matter of 15% of the floating loss. Especially now that the epidemic situation is like this, my relatives and friends who open barbecue shops and milk tea shops are basically going to close down.

So what other “more reliable and accessible” investments do I have?

Forgive my incompetence, I really can’t think of it.

Since buying funds (including stocks) is my only option, then my investment must not only be based on the earnings of this year, but at least for the next five years.

2 Then, in order to make myself feel more at ease, I began to look for historical data as support

The second statistic: I saw it recently on the snowball number called Jiang Cheng . It is easy to win long, but difficult to win often.

After reading these two data, the idea of ​​”long-term base” is basically more firm.

3 Immediately after that, the next step is to solve the problem of “Do you want to cut the meat first to avoid risks, and then buy it back when there is an inflection point?”

My answer is: forget it.

I don’t think I have the ability and the time.

The most important thing is that whenever we start shouting “to clear the warehouse, to cut the meat”, it has been falling for a long time, and it has basically fallen into place. (Because, in the early stage of the fall, most of us must be “happy”, and the idea at that time must have been to thank the market for giving us the opportunity to “buy the bottom”. Then, basically every time the market fell, I added positions to the mid-term, and found that it was still plummeting. When it drops 3-5% every day, it starts to panic.)

Now when we look at the retracement, the single fund has basically dropped by more than 20%. At this time, it is of little significance to cut the meat to avoid risks. Moreover, once it starts to warm up, it will be a very fast time to rise by 10%. When we react later, it is estimated that it will rise to the middle of the mountain. .

If we really have this ability, there will be no 0% income outperforming 90+% of the Christian Democrats. Therefore, I am still in awe of the market (maybe I am lazy, anyway~), anyway, I don’t think I am the best. To sum up, continue to lie down and hold it.

4 Then, seeing myself lose -14%, while my friends who are not fund practitioners only lose -6%, I still feel “self-blame + guilt”. I want to know, why do we (including 60% of my Christian friends who outperformed by me) can’t help chasing up and down?

So, I read some analysis and summed up 2 major reasons. (The core purpose is to make yourself feel better and not to blame yourself too much.)

Chasing up and down – Reason 1: The underlying mental model inherited from primitive times.

This underlying mental model is formed in such a life scenario: our ancestors, like other primates, lived in grasslands and forests, and also lived in groups with complex social structures, interacting with their peers , together to avoid powerful enemies and find food to satisfy their hunger. Its main corresponding solutions: ① Avoid beast attacks; ② Store food.

① Thinking about the primitive ancestors, he suddenly saw a fierce beast sprouting out of the grass. Did he think carefully about the escape route, or just went blank, his limbs were congested, and he ran away immediately! In the same way, in the stock market, our fear works like this. Once there is a slump, once the fall is endless, our first reaction is to cut the meat and clear the position and run away.

②Because of the high scarcity of food in the environment where our ancestors lived, we are extremely obsessed with sweets and fruits. Losing weight has become a big problem. Genes that like sugar and fat help ancestors survive. As a result, in modern society, we like to save and pursue high yields, and it is always difficult to overcome our greed.

Chasing up and down – Reason 2: Regardless of profit or loss, we all have a “risk illusion”.

Psychologists have found that in the absence of any change in the probability of winning or losing, people’s perception of risk will naturally occur with the change of their winning or losing results. This illusion hides a trap that keeps gamblers deeper and deeper.

People who win money will forget the risk, become more excited, and want to continue gambling until they lose money;

And those who lose money will also forget the risks, and will especially want to turn over the book, even until they finally lose all.

We are naturally very susceptible to both of these delusions.

These two typical types of risk illusions, with formal concepts, are the “casino money” effect and the “trying to get your money back” effect.

People usually become numb to the risk after they get the benefit, and they are usually willing to take more risk.

Just like a gambler who has just won a lot of money, subconsciously will not regard the earned money as his own money, but will regard it as casino money, and bet more casually, more risky, and more easy to lose.

We have learned the concept of mental accounts, the “money effect of gambling money”, that is, after winning money, we will put the money of the same effect in the mental account of “floating wealth”, and we will not feel bad if we lose money.

Seeing this phenomenon, it is not difficult for us to understand why retail investors always lose money. Because after retail investors make money, the “casino money effect” often begins to play a role. The more they earn, the greater the effect of this effect, until they lose money. . .

2> “Attempt to turn over the book” effect

After people lose money, they always look for opportunities to win back their money (return the money back), and end up losing even more.

In an experiment in the United States, the researchers counted the trading records of 426 Treasury bill futures traders in the Chicago Board of Trade. It was found that if these traders lost money in the morning, they tended to increase their risk levels and trade more frequently in the afternoon. As a result, these risky trades are more prone to losses.

How can we combat our risk bias and prevent excessive risk-taking in investing? That’s about building our systemic investment framework and putting money in the hands of mechanisms, not our emotions.

To be honest, the core reason for setting up scheduled investment recently is “I don’t want to open my account and see a loss”

I simply calculated a set of “smile curve” data by myself:

When the net value of a fund falls from 1 to 0.5 and then rises back to 1, as long as the fixed investment continues, the rate of return is 41%~~ 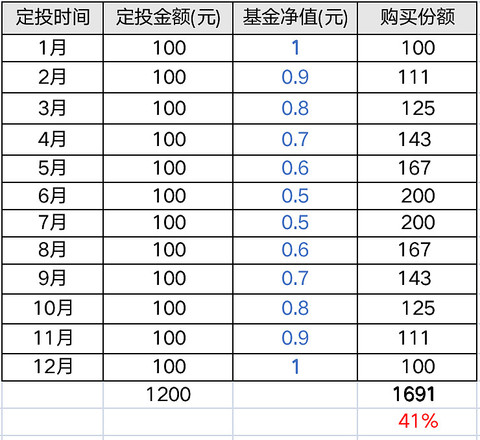 Then I’ll go step by step, summon up the courage to vote

Well, I have finished sharing my 5-step mental journey with you.

I hope it will be helpful to the little friends who have been entangled, confused, and blamed like me!

This topic has 26 discussions in Snowball, click to view.
Snowball is an investor’s social network, and smart investors are here.
Click to download Snowball mobile client http://xueqiu.com/xz ]]>