As the largest female user community, Xiaohongshu has a large number of skin care and beauty, clothing, fashion, home and other women’s favorite content. At the same time, with the gradual increase of female players, there are also many game-related content in Xiaohongshu. There are not only game strategies, player content sharing, fandom 2 creation, player ecological discussion and other content that will be discussed in traditional game forums, but also what I want to discuss today, perhaps unique to Xiaohongshu – dress-up game tools.

The so-called game tools mainly include the following types: assembly machines, game peripherals, game consoles, and console accessories. The discussion on the above game tools on Xiaohongshu often focuses on how to make these tools more attractive and how to obtain more performant tools, but not the focus of the discussion.

Below we discuss by type.

Take the assembly machine as an example. The configuration in Xiaohongshu is often “one-click direct introduction”, and similar accessories lack horizontal performance comparison. There is no need to recommend a reason, they only need to put forward their own budget requirements, and then follow the list given by the person who helps to bill to “one-click purchase”. For a simpler approach, you can also directly copy the ready-made assembly operations on the Little Red Book according to your budget.

They generally do not have high requirements for performance, and mainly pursue cost-effectiveness. The performance requirements can only be used to drive popular end games such as “League of Legends” and “Eternal Calamity”. And the part that can give full play to their subjective initiative and willingness to “spend more money” is the interior decoration of the chassis and the chassis. The powder-white chassis and various beautiful water coolers are the most popular types. Other accessories with good cost performance plus a beautiful case and water cooling, an assembled case with various figure decorations inside is their ideal assembly machine. 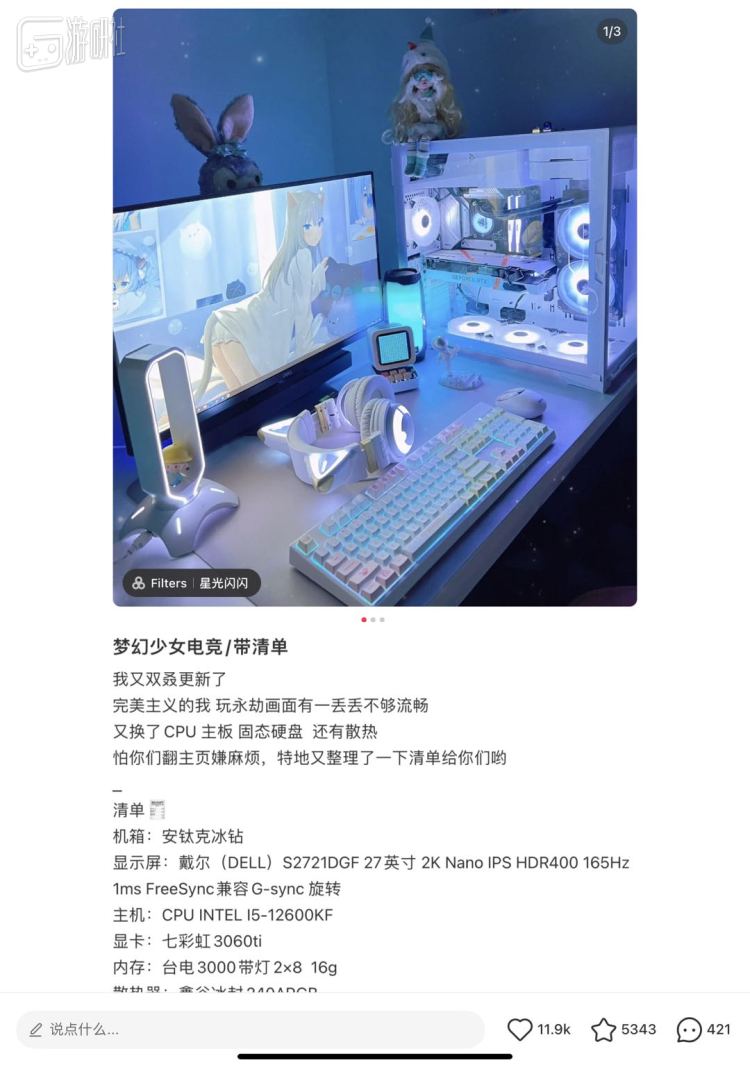 The keyboard is the hardest hit area for game peripherals. In order to meet the demand for beauty and personalization, the common mechanical keyboards sold to the public are no longer enough to meet the needs of Xiaohongshu players. The customized keyboard is the king standing at the top of the Xiaohongshu keyboard food chain. Customized keyboards are mainly composed of kits (shells), keycaps and shafts. Among them, the keycaps can also be customized one by one, and the three can be freely combined according to the needs to form a unique keyboard in the world.

Many players are obsessed with this “exclusively for me” feeling and indulge in it. Basic players can group together on Taobao or Xiaohongshu to order finished customized keyboards. There are also various “net red finished keyboards” on Xiaohongshu, and they can copy homework directly. Advanced players will find a dedicated generation team. To customize their own unique keyboard, high-end players can buy accessories and assemble by themselves. Keyboard budgets range from a few hundred to a few thousand, or even tens of thousands. Many players will become collectors after entering the pit (collection will also become one of the key words in this article). They buy keyboards not only for use, but for the “beauty” of the keyboard. Enter multiple keyboard collections. 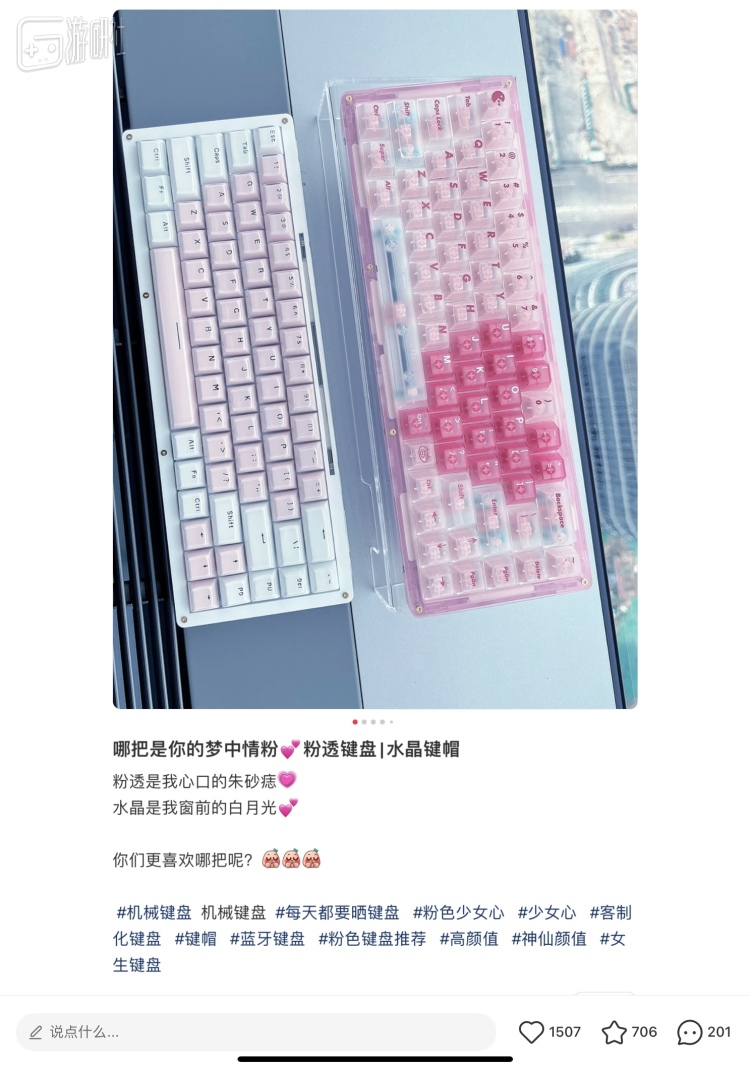 For other aspects of game peripherals, such as headsets and mice, the needs of players on Xiaohongshu are mainly in two aspects. One is the size suitable for girls, and the other is the appearance of the headset and mouse. Female players tend to prefer other options other than black, and from the shopping site, non-black headsets and mice are often more expensive than the black counterparts, and players have to pay a “face value tax” for their beauty. 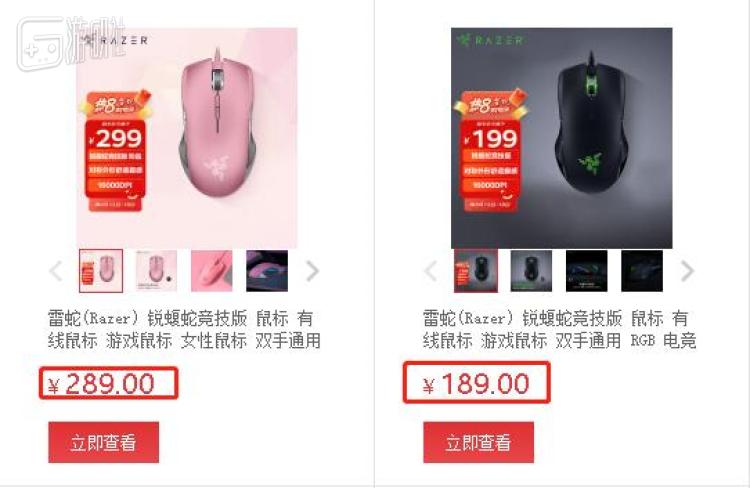 The same mouse, the pink model is 100 yuan more expensive than the black model, and the premium is nearly 50%

The next step is the link shown in the title of the article, and the handheld is dressed up. There are also many options for dressing up the handheld, and many ways to play. 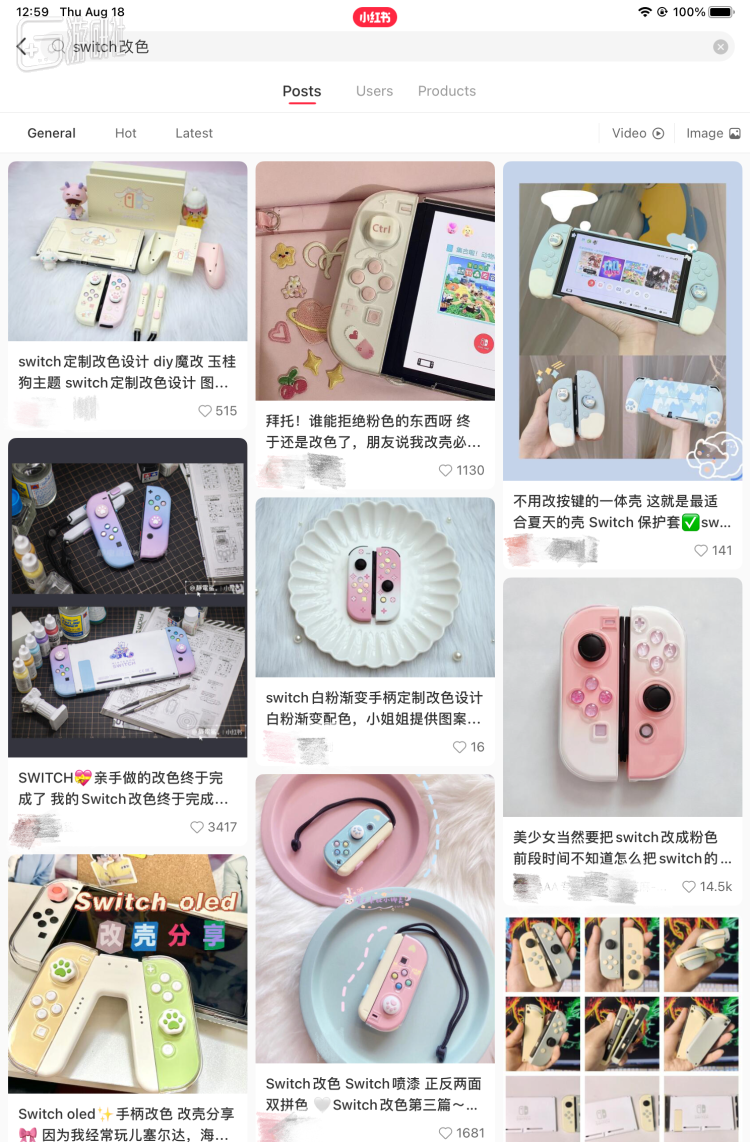 Popular posts under the NS transformation tag have liked or even exceeded 10,000

The first method is to change the shell, directly replace the original shell of the NS, and use a non-original shell of other colors and styles. Players can find the self-modification tutorial on Xiaohongshu and choose to change the shell by themselves, or they can find a store on e-commerce channels such as Taobao Xianyu, and send NS to the store to help replace it. Here, players seem to be very concerned about the safety of the handheld. Their focus is whether the seller can replace their NS with their ideal appearance, and they are less worried about the possible safety during the delivery process and modification process. Problems, such as the original parts inside the package, etc.;

The second method is painting, which is relatively unnatural compared to changing the shell, but the original NS shell can be retained. Compared with changing the shell, the DIY of painting is also less difficult, and there is no need to deal with complex circuit problems and disassembly and assembly problems.

The third method is to stick the NS shell with a pain sticker. The advantage of the pain sticker is that if you don’t like it, you can just tear it off and replace it with a new one. The potential hidden danger is that if the quality of the pain patch is not good, the NS itself can be a mess after tearing it off, and it is all traces of glue.

The second is the protection of NS itself, which is also the process of dressing up, including the use of NS protective shells and NS storage covers. In addition, the buttons will also be dressed up, some will choose to replace the buttons directly, and some will use button covers. The transformation of NS is probably like this. It is a small-cost transformation, and the cost ranges from dozens to more than one hundred. Players experience the joy of owning an exclusive NS. On Xiaohongshu, it is also common for players to make remarks that “the host has not yet arrived, and a lot of accessories have arrived.”

No matter how it is remodeled, NS is only one after all, and it will be difficult to play new tricks no matter what. Players who fell in love with “hand-held dressing up” through NS transformation turned their attention to the NS accessory – gamepad. They will not only transform the original handles of NS like the NS transformation method, but also collect various handles, including official limited editions and various cute handles from folks. The handle is not for use, but for collection and appreciation. 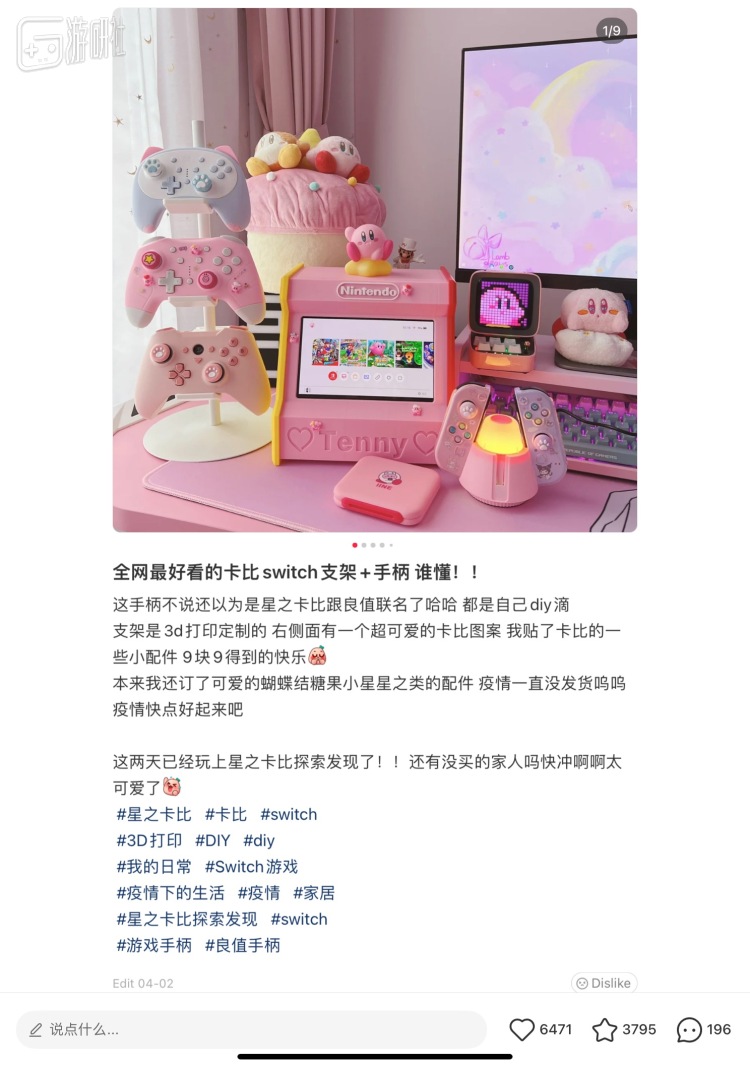 After all-round dressing up of NS and its peripheral products, Xiaohongshu players turned their attention to other handhelds. The handheld here mainly refers to those handhelds that have been discontinued and are mainly traded in the second-hand market, including PSV, PSP, 3DS, NDSL, GBA and so on. They will go to the seafood market to find those non-limited models of discontinued handhelds, and make some small modifications to these handhelds. In fact, there are quite few types of accessories for discontinued handhelds in the market, and the modifications that players can do are limited. That is, sticking pain stickers, sticking small stickers, adding protective shells to the handheld, and attaching a small ornament to the handheld. The more popular types are pink-white handhelds and pink-white and blue-white PSVs.

In addition to non-limited-edition handhelds, they will also search for some limited editions at the time. The most popular limited-edition handhelds are the Dongsen version of the new Xiaosan, and the limited-edition PSV and PSP of various Otome games. Except for a small number of players who are actually playing games with handheld consoles (mainly through PSV and PSP to play Otome games released in ancient times), most players buy discontinued handheld consoles for collection purposes. And this frenzy has also affected prices in the seafood market. Now the price of the new Xiaosan in the seafood market is almost the same as the price of the new Xiaosan I sold five or six years ago, or even a little more expensive. This behavior of making the discontinued handheld consoles too much to preserve value and even raise prices has also aroused the dissatisfaction of some buyers who want to play games. They called for a stop to this kind of purchase behavior and let the price of the seafood market return to rationality. 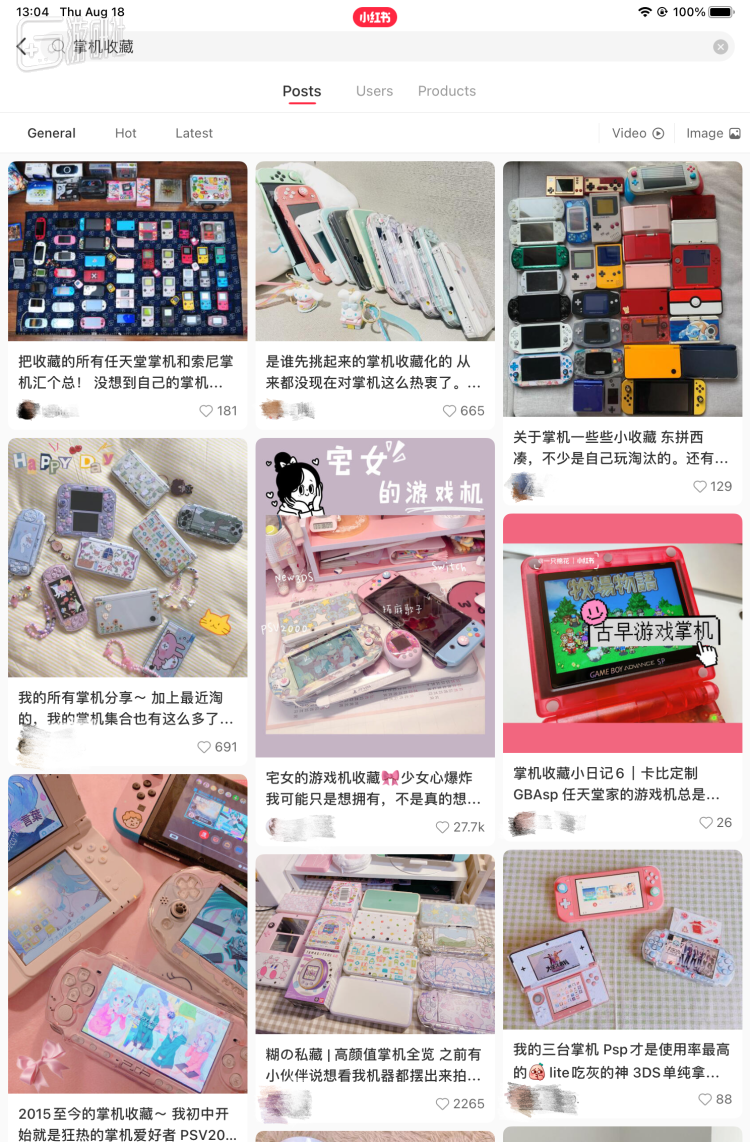 Overall, dressing up the handheld seems to be a gradual process. Perhaps in a coincidence, Xiaohongshu recommended the first NS transformation-related post to the player, and the player clicked in out of interest, and more NS transformation posts would appear later. Players have been immersed in the Amway of this kind of post for a long time, and finally became a part of the transformation. At first, she was just a beginner player who slightly modified NS. However, the recommendation algorithm will further recommend other modification contents to such players, such as the modification of the controller and various beautiful controller Amway. The discontinued handhelds who didn’t know it at all. Under the bombardment of one beautiful multi-handheld post, it is difficult for players to resist the temptation to become a part of it. At this point, once an ordinary player, perhaps even a person who did not play games in the past, has become a high-level player who “dresses up with a handheld console”.

What do players gain from it? They not only reap the pleasure of shopping, but also feel satisfied by reading a lot of similar posts. They also have friends with like-mindedness on Xiaohongshu. The joy of collecting.

Maybe some players just dress up the handheld for the purpose of collection. Their purpose is to collect, not to use the handheld to play games. This kind of behavior itself may arouse the dissatisfaction of some game players, thinking that they are grandstanding and disrupting the order of the handheld market. Buying a handheld if you don’t play games is to tarnish the handheld. But in fact, other players who play the game seem to have no position to criticize or underestimate this collection behavior. After all, many gamers also “buy games like a mountain, play games like a thread” on a daily basis, and many players are avid collectors, collecting all kinds of limited edition handheld consoles, and collecting all kinds of limited game cassettes. There seems to be no difference in the essence of everyone. They all like the result of “owning”, rather than enjoying the process of “playing”.

This article is reproduced from: https://www.yystv.cn/p/9612
This site is for inclusion only, and the copyright belongs to the original author.