Yesterday, Ejiao released its semi-annual report, in which I recorded some key points and sorted out some of this investment by the way.

After three years of hard work, the channel inventory has basically been completed. There are only two key points left in the follow-up: what level of revenue can be recovered? How to solve the problem of donkey skin?

In the first half of the year, revenue was 1.826 billion, a year-on-year growth rate of 8.25%. In the second quarter, the single-quarter revenue was 935 million, a slight decrease of 1.86% year-on-year. This slight year-on-year decrease is speculated to be due to two reasons: one is the company’s stated policy of controlling goods; the other is the East China region, where sales account for half of the company’s country, and experienced the closure of Shanghai.

Of the 1.826 billion, Ejiao and its series of products accounted for 1.594 billion, accounting for 87.3%, second only to last year’s annual report in recent years. It shows that the company’s slimming strategy of shutting down and turning around has achieved remarkable results, and the quality of revenue is getting higher and higher. The gross profit margin of Ejiao series products was 68.78%, a year-on-year increase of 5.5%. Of course, in this new cycle, I don’t expect Ejiao’s gross profit margin to return to its historical peak, it would be good if it could reach more than 70%. 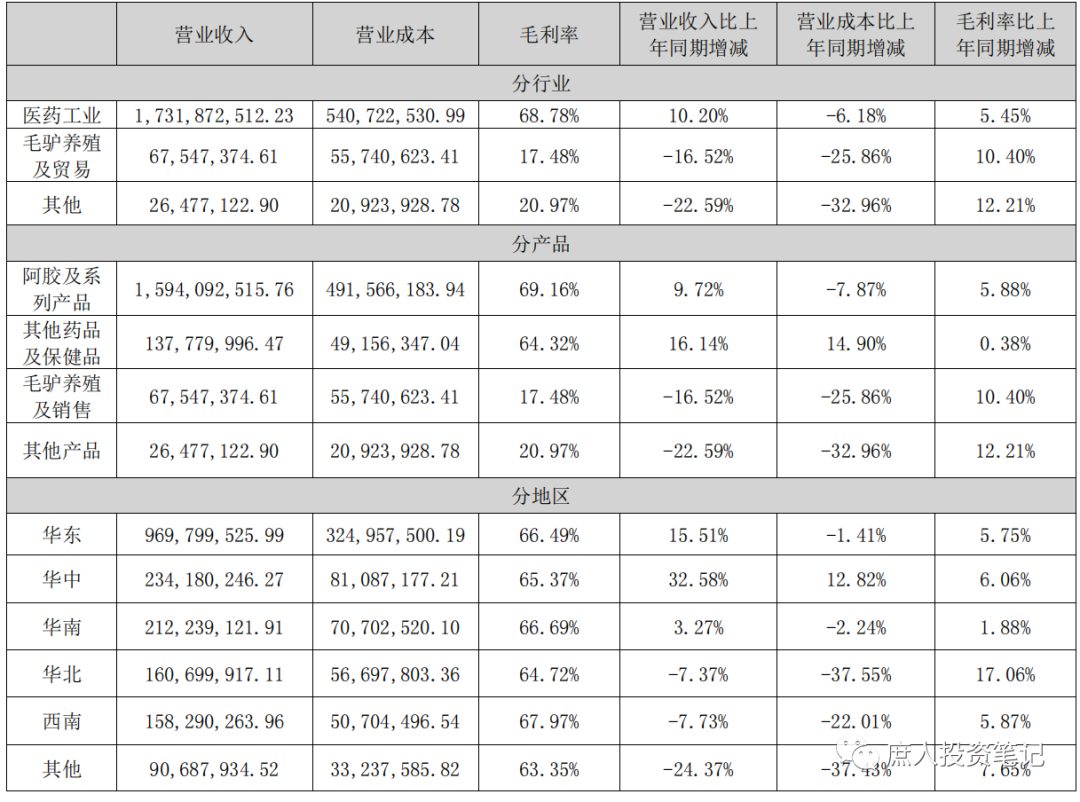 In addition to Ejiao series products, other medicines and health products include Gulong Capsules and other non-Ejiao series products. This gross profit margin also went to 64.32%. However, the proportion of this part is very low, so don’t pay too much attention.

In terms of sub-regions, East China, South China, and Central China are growing, while North China and Southwest China have a slight decline. Among them, the East China region, which is the base camp, has grown rapidly in the case of Shanghai’s closure. Some friends interpret this as the high income level in East China and South China, so it has grown against the trend. I don’t agree with that.

No matter which region it is in, the main consumers of Ejiao are originally the local high-income people, and the overall high income level in East China and South China has been reflected in its sales ratio.

The dazzling growth rate in the first half of the year should be due to the structural differences brought about by the different progress of inventory digestion in various regional channels. When the channel inventory crisis broke out in the first two years, East China took the lead in destocking in the first half of 2019, and violently destocking in the second half of 2019, and the rest of the region was basically half a year to a year later. This round of recovery is also the locomotive of East China, and I believe other regions will soon follow.

Overall, this revenue situation is not optimistic, but considering that the company is recovering from a serious illness and is still implementing the strategy of controlling goods and supporting prices, it is also acceptable.

However, this strategy of controlling goods and raising prices has brought a doubt: Since it is controlling goods, why did the receivables in the first half of the year increase by 226 million compared with the beginning of the year? However, the contract liabilities have only changed from 318 million to 356 million, only an increase of 38 million?

This question, I looked around on the snowball, and there is no explanation that particularly convinces me. Looking better, it is estimated that it should be a structural difference for the downstream channel: although some large chain pharmacies are running out of stock quickly, but under the influence of the epidemic, the funds are tight, and the company is required to give a certain account period when delivering goods. In order to maintain customer relations, the company has to start with, after all, Ejiao is not as popular as high-end liquor. Some small-scale customers, not only can’t get the billing period from the company, but need to pay before delivery.

Of course, the above are only speculations and require follow-up verification – if it is true that as Liu Guangyuan said, Ejiao blocks will become very scarce next, then the receivables will decline. The time I give personally, optimistic estimate is the second half of next year, pessimistic estimate is the second half of the year after. Why do you say that? This leads to the following question.

2. To what level can revenue recover?

Before I invested in Dong’e Ejiao, the core logic chain is:

1. The company’s current channel inventory dilemma is temporary, and it will definitely be digested by the terminal’s real sales. It’s just a matter of time.

2. After the channel inventory is digested, the company’s revenue will definitely return to the level of terminal real sales.

Then, the question arises: What is the company’s real terminal dynamic sales level? When will it be able to get back to that level?

Before discussing this issue, I would like to clarify a basic premise: only for the existing revenue of Ejiao and its series of products, other medicines and health care products (Gulong Capsule, Bird’s Nest, etc.) are not considered, but only as a supplement. This is more conservative, and second, simpler.

Regarding the real revenue of the Ejiao series, I also made a quantitative judgment through a series of assumptions before. However, when too many assumptions are made, the quantitative results become precise errors. This time I want to change my mind and make a rough estimate.

The revenue of the company’s Ejiao series products in the past few years is shown in the following figure:

So, which year should the terminal real dynamic sales refer to?

Due to the existence of the demand curve, quantity and price will affect each other. Anyone who discusses sales without price is a hooligan. At present, the terminal price of the 250g donkey-hide gelatin block in the red box (or the terminal price expected by the company) is 999 yuan/box. Let’s first review the history of the company’s price increases:

Combined with the changes in the company’s receivables (see the figure below), it is speculated that in 2017, the channel began to sell, and the enthusiasm for picking up the goods declined, and the terminal dynamic sales should be blocked before this time. That is to say, starting in 2016, not only the guide price of 1129 could not be sold, but even the actual shipping price lower than this price could not be sold. Before 2015 and before, the sales volume in the company’s report can be regarded as the real terminal sales at a price slightly lower than the guide price.

Based on this, it can be roughly inferred that between 2015 and 2016, the sales volume of 3.0-3.5 billion donkey-hide gelatin blocks roughly corresponds to the real terminal sales between 900-1100 yuan.

Similar logic, it can be calculated that the sales volume of Compound Ejiao and the real sales volume of Taohuaji between 2015 and 2016 are about 10-1.3 billion and 600-700 million respectively. The total of the three is 4.6-5.5 billion.

In addition, considering the slight increase in the income level in the past few years from 2015 to 2016, the real mobile sales of terminals that can be accepted at the same price will also increase. It should be relatively reasonable to take a revenue of 5.5 billion as the revenue level that Ejiao series products can recover.

Donkey skin is the Achilles’ heel of Dong-E-Ejiao. The revenue discussed above is a demand-side calculation. The supply-side question is: Does the company have enough donkey skins to meet this scale of revenue?

Considering that Fufang Ejiao and Taohuaji also need to consume some Ejiao pieces, to support the above 5 billion to 5.5 billion revenue, it is estimated that 300,000 donkeys will be consumed each year.

In the past few years, the domestic donkey stock has only been around 2.5 million, and the annual slaughter of donkeys is about 300,000 to 350,000. In other words, even if the domestic donkey slaughtering volume is all used for the company to boil glue, it will just support the revenue of 5 billion to 5.5 billion. This is obviously not possible. Fortunately, it can also be imported from abroad. The following picture shows the import data of donkey skins by customs in the past few years:

There is a data that needs special attention in the above picture. The weight of imported donkey skins is decreasing year by year. It is speculated that because the domestic demand for donkey skins has greatly increased, and the price has risen, many overseas donkeys have been killed and skinned before they are minors.

With the overall recovery of the Ejiao industry, the demand for donkey skins has begun to increase. There are donkeys abroad, but there is no closed-loop industrial chain. They all buy donkey skins when selling donkey meat, and there are also restrictions on the export of live donkeys. There is a complete closed-loop industrial chain in China, but donkeys are becoming fewer and fewer. The donkey skin problem still cannot be fundamentally solved, and it is estimated that a new round of donkey skin grabbing war is about to begin.

However, this problem will not affect the company’s operations in 2 to 3 years. Just as an investor in Ejiao, you need to keep an eye on this issue and see how the company’s management responds and resolves it. Personally, I think we can only gradually restore the price increase and reduce the amount of Ejiao pieces, and increase the proportion of products that consume less donkey skin such as Compound Ejiao Paste and Taohuaji.

Since the operation of the company’s Ejiao series products is mainly at the level of joint-stock companies, the corresponding income tax rate is 15% (the 15% tax preference due to the qualification of high-tech enterprises is valid until December 8, 2023, and there is a high probability that it will continue after expiration. ). Therefore, the net profit margin is about 31.45%, and conservatively calculated at 30%, the net profit corresponding to 5.5 billion revenue is 1.65 billion yuan. The net profit brought by factors such as the resumption of price increases, the recovery of revenue exceeding 5.5 billion, and other drugs and health care products will all be regarded as a margin of safety.

A company like Ejiao, whose net profit is all free cash flow, can enjoy a valuation of 25~30PE under the background of the current big water release, corresponding to a market value of 41 billion to 49.5 billion. The current market value is 23.8 billion, and there is room for doubling in 2 to 3 years. I will continue to hold heavy positions.

This topic has 57 discussions in Snowball, click to view.
Snowball is an investor’s social network, and smart investors are here.
Click to download Snowball mobile client http://xueqiu.com/xz ]]>