On June 15, the “Tencent Interactive Entertainment x Digital Dunhuang Cultural Heritage Digital Creative Technology Joint Laboratory” (hereinafter referred to as the “Technical Laboratory”) jointly established by the Dunhuang Research Institute and Tencent was officially announced. At the press conference, the technology laboratory announced the launch of the first batch of cooperation projects related to the “Digital Book Collection Cave and the official virtual human of Dunhuang Mogao Grottoes, Gaya”. The Dunhuang Sutra Cave is one of the greatest archaeological discoveries of the 20th century in China. The cave contains more than 60,000 cultural relics, including scriptures, documents, and silk paintings from the 4th century AD to the 11th century AD, and is called “the key to unlocking the world’s medieval history”. However, due to historical reasons, these precious cultural relics have been scattered all over the world, and most people have no chance to see their true colors. The technology laboratory will combine the cultural relics digitization technology of the Dunhuang Research Institute and the game technology of Tencent Interactive Entertainment to build a full-scale digital scripture cave online, and share with the public the “fresh life” behind the cultural relics unearthed in the scripture cave in an interactive experience. “History”, and will also create the official virtual human of Dunhuang Mogao Grottoes, Gaya, to carry out specific practices such as real-time live broadcast and explanation of virtual human beings, and explore innovative interpretation methods for promoting Dunhuang culture.

The two parties also signed a five-year strategic cooperation agreement. In the future, based on the technology laboratory and using Tencent Mutual Entertainment’s game technology, they will jointly develop cultural and creative IP products in the digital protection of cultural heritage, cross-border linkage, and exchange of digital cultural protection and Internet technology talents. Carry out continuous and in-depth cooperation and exchanges in other fields.

Su Bomin, president of the Dunhuang Research Institute, said that Tencent is an important “leader” in the innovation and development of digital technology, and a “leader” in digital new cultural creation of cultural heritage. I am very happy to join hands with Tencent again. Relying on the academic and resource advantages of “Digital Dunhuang” and the technology and communication advantages of Tencent Interactive Entertainment, we will jointly develop a new paradigm and new format for the promotion and dissemination of Dunhuang culture and art, and contribute to the inheritance and innovation of Chinese excellent traditional culture. make a positive contribution. 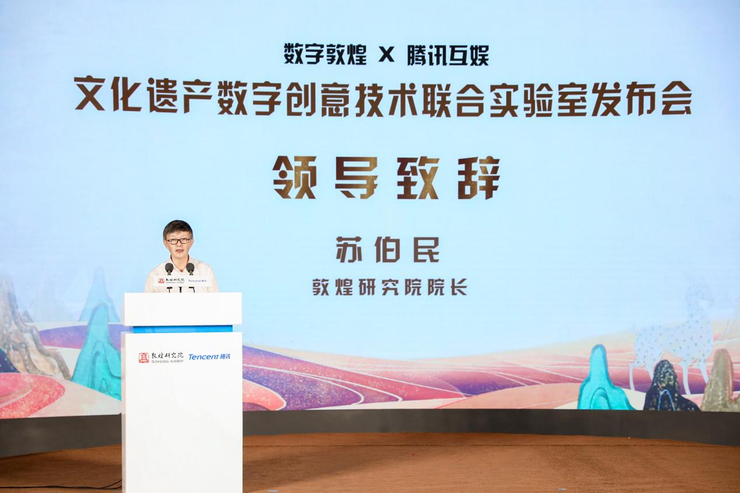 Li Hang, general manager of the Marketing and Public Relations Department of Tencent Group, said in his speech that “living” cultural relics in digital form is an important means and bridge for protecting cultural relics and inheriting culture in the new era. Fusion has entered a whole new stage. Future projects will apply the most cutting-edge game technology, give full play to the various possibilities of creative technology, and deeply participate in the digitization of cultural heritage.

1:1 digital high-fidelity reproduction of the grand occasion of the Buddhist scriptures cave, and dialogue with “ancient people” through history

In order to allow more public to have a glimpse of the true appearance of some of the cultural relics unearthed in the scripture caves and deeply feel the vivid stories behind them, the Dunhuang Research Institute will join hands with Tencent Interactive Entertainment, through laser scanning, photo reconstruction technology, combined with the PCG technology (programmed) of the game engine. Content generation technology), PBR technology (physically based rendering technology), restore the cave paintings and cultural relic details with millimeter-level accuracy 1:1, and simulate the lighting and vegetation of the Mogao Grottoes in Dunhuang at different times, and build them online. A full-scale digital scripture cave realizes the digital high-fidelity reproduction of the physical scene, and reproduces the grand scene of the ten thousand volumes of books in the scripture cave.

In addition, the two sides will also create and build digital interactive cultural scenes based on the historical content recorded by the cultural relics unearthed in the Sutra Cave, recreate the historical temporal and spatial scenes behind the cultural relics, and gradually build a “digital cultural world” in the Sutra Cave, which will be vividly displayed. Medieval history of China and the world. Among them, the first cultural relic that is about to enter the public eye is the national first-class cultural relic “Dunyan 001 “Gui Yijun Yafu Wine Breaking History”. Through it, the public can gain an in-depth understanding of Dunhuang’s economy, culture, calendar, folk customs and other social aspects in the Northern Song Dynasty, as well as the past and present life of the scriptures cave from the excavation of the cave, the collection of thousands of scrolls to the shocking appearance and the dispersal of literature.

On this basis, the digital scripture cave also vividly restores many “historical figures”, allowing the public to “dialogue and interact” with figures from different periods during the viewing, and experience “travelling” history in an immersive experience. The digital scripture cave is one of the first key projects of the technology laboratory. In the future, the digital scripture cave is expected to become an important window to the world of Dunhuang cultural relics. Through this technological window, people can transcend the shackles of time and space and deeply experience the Tibetan scriptures. The rich details of the Jingdong cultural relics, feel the vast beauty of Dunhuang culture.

The image of Jia Yao focuses on the classical charm, and details such as model, material, dark pattern of cloth and even hair and temples have been finely polished. Based on the game engine’s real-time driving technology pipeline, combined with multi-field technologies such as motion capture, full real-time driving and rendering, real hair and real-time cloth solution, and facial driving underlying algorithm optimization, now Jaya can not only make expressions in real time, but also Hair, clothes, accessories can move with the wind just like in reality. In the opening ceremony of the press conference, Jia Yao, as a guest host, performed a wonderful and beautiful Dunhuang dance. Accompanied by the original music that restores the charm of ancient music, Gayao dances professional Dunhuang dance movements such as hugging, playing, rebounding pipa, and flute, which are graceful and agile.

With the rapid development of the digital economy and the accelerated integration of virtual and reality, more and more technology companies and cultural and cultural institutions have joined hands to introduce cutting-edge digital technologies to explore new forms of digital cultural preservation.

The “Opinions on Promoting the Implementation of the National Cultural Digital Strategy” and the “14th Five-Year Plan for Cultural Relics Protection and Scientific and Technological Innovation” issued by the General Office of the Central Committee of the Communist Party of China and the General Office of the State Council all clearly stated that scientific and technological innovation of cultural relics should be strengthened. The Ministry of Culture and Tourism, The State Administration of Cultural Heritage has also included technological innovation and digital construction of cultural relics into its future development plan.

Under the guidance of relevant national policies, the cooperation between Dunhuang Research Institute and Tencent is gradually deepening. Since the two parties reached a strategic cooperation in 2017, they have successively launched digital communication products such as Digital Supporters, King Glory Feitian Skin, QQ Music “Ancient Music Heavy Voice” concert, Dunhuang Poetry Scarf, “Yunyou Dunhuang” applet and Dunhuang animation drama. content. In the early stage of exploration, the two sides explored multiple cross-border linkages, and produced popular game skins such as King Glory Meets Feitian, Meets Shenlu, and Meets Hu Xuan. More than 40 million people in the game alone received the King Glory meets Feitian skin. ; With the gradual deepening of cooperation, the two parties jointly launched the “Dunhuang Yunyou” applet in 2020, which opened a new window for the dissemination of Dunhuang culture. At present, the total number of visits to the applet has exceeded 58 million, and the number of independent users has exceeded 11.5 million. With the establishment of the technology laboratory today, the two parties will further explore a new path of cooperation in the digitization of cultural relics in a more systematic way of cooperation on the basis of the previous ones.

Technology helps cultural inheritance, and culture gives technology warmth. Dunhuang Research Institute has deeply integrated culture and technology with the advantages of academic research results and Tencent’s cutting-edge digital technology. This time, the two parties will join hands again, not only to create more possibilities for the digital protection and inheritance of cultural heritage, but also to further promote the realization of digital cultural preservation and the times, and the sharing of cultural preservation results with the people, so that the excellent traditional Chinese culture will be better in the new era. to bloom with new brilliance.

This article is reproduced from: https://www.leiphone.com/category/industrynews/qN2aVDu9dKnrEAvJ.html
This site is for inclusion only, and the copyright belongs to the original author.