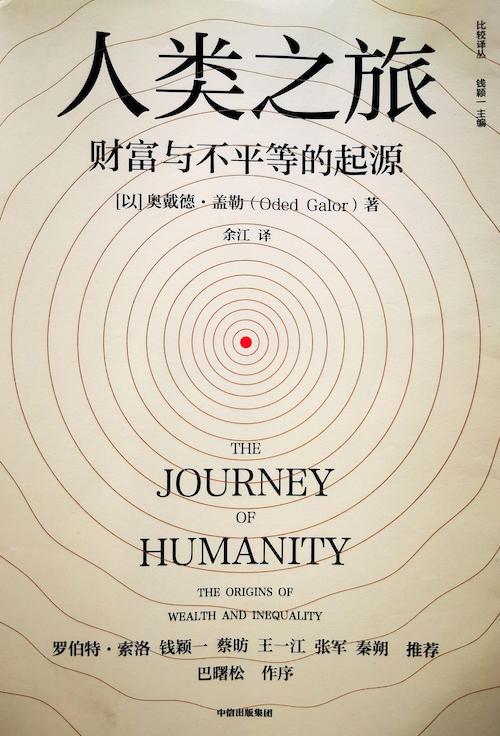 Mr. Mingyue from CITIC Publishing House quietly sent me a copy of “The Journey of Humanity – The Origin of Wealth and Inequality” by Odd Geller of Israel.

Geller, a professor of economics at Brown University, is considered a potential candidate for the Nobel Prize for his “unified growth theory”.
This book explores the reasons behind human economic prosperity and the determinants of global wealth inequality.

I just finished reading it last week. The book is mainly divided into two parts:

​​The first part introduces the Malthusian trap. This theory has been valid for thousands of years in the past, and only in the last 200 years has it failed. The failure of this theory explains why fertility rates are declining globally.

The second part, from the perspective of natural selection, introduces how cultural differences arise in different countries, and how they affect the economic development of countries.

2. What is the Malthusian Age?

The Malthusian era represents a period that began with the advent of humans and ended with the Industrial Revolution at the end of the 19th century.

During this period, humans cycle between two states:

The cycle of states one and two has occurred many times in history.

For example, when human beings first entered the agricultural society, they provided more energy for human beings by cultivating high-carbohydrate crops such as wheat, rice, and corn. In turn, it can support human beings to reproduce more offspring. Eventually the human population was limited by arable land and reached a peak. After reaching the peak, more people born in certain households die because they cannot get enough food.

Another example: When humans arrived at a new continent through migration, they were rich in resources at the beginning, so the population increased significantly. But after the population reaches its peak, more people will not be able to get enough resources.

The end of the Malthusian era

The answer: After the Industrial Revolution, the cost of education became prohibitively high.

In the Middle Ages, education was really only the privilege of the few. Take the literacy rate as an example, the literacy rates in medieval China, France, Germany, the Netherlands and other countries were all lower than 10%.

But by the 20th century, the global literacy rate surpassed 50 percent and is now 86 percent. 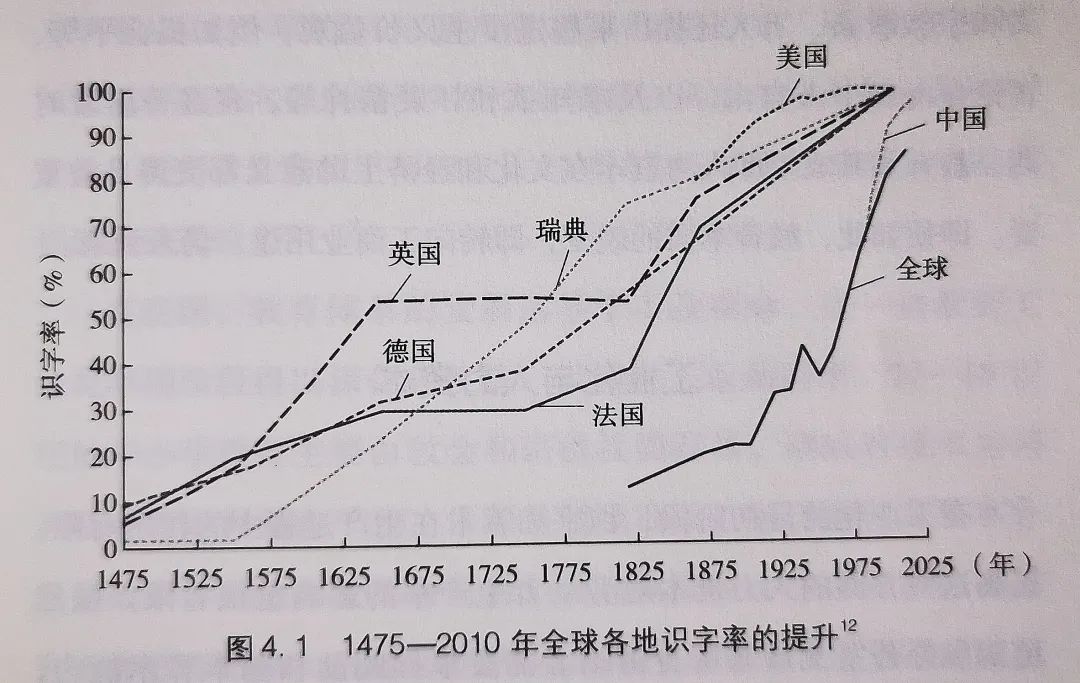 After the Industrial Revolution, capitalists found that investment in the education and skills of workers in production became more important, driving countries to prioritize investment in education.

However, it has been found that fertility rates have fallen sharply globally because of the enormous resources invested in education. After the industrial revolution in Western European countries, the fertility rate fell by 30% to 50% (as shown in the figure below). 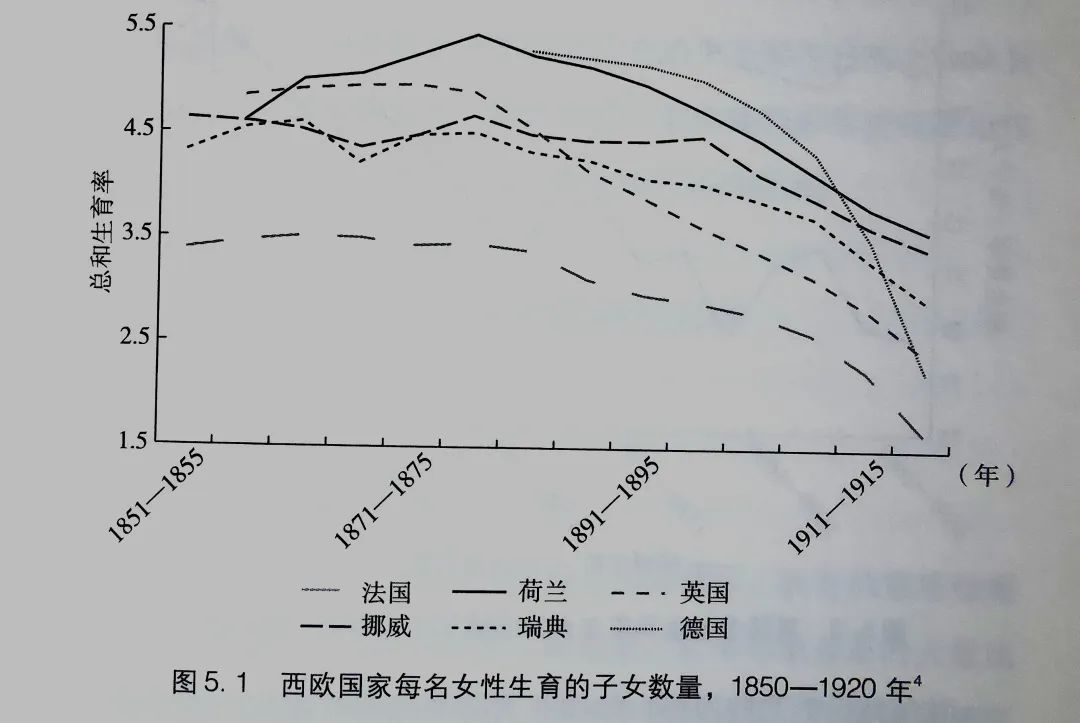 Escaping the Malthusian trap is of great significance to human society. because:

Of course, while everyone has time to enjoy life, have a more varied diet, and have fun. However, it must be said that the whole world has fallen into an era of low fertility.

The influence of natural environment on culture

4.1 The culture of collectivism

When I read“Principle 2” before, the book mentioned a lot of cultural differences between China and the United States. For example, the Chinese value collective interests more, and Americans value individual interests more.

I began to feel that this cultural difference came from various Confucian cultures in ancient China. For example: Kong Rong gives pears, and the words serve the country with loyalty and loyalty are all about collective interests. But there are no words to praise personal interests.

But the book raises another point: China’s land is suitable for growing rice, so it needs to share large-scale irrigation systems with each other, which contributes to a collaborative culture of collectivism. And something like wheat requires less collaboration and is prone to a more individualistic culture.

To sum it up: the cultivation of labor-intensive crops is associated with a culture of collectivism.

Similarly, there are differences in attitudes towards women entering the workforce. Studies have found that farming in some areas requires rakes drawn by cattle, and that controlling livestock and rakes requires considerable upper-body strength. Women in these areas are more engaged in housework.

Therefore, in southern Europe, the Middle East and Central Asia, where rakes have been used more historically, fewer female faces appear in the workplace.

Nobel Laureate in Economics Kahneman introduces the human in his book: Loss Aversion. That is, the emotion of loss of 100 yuan is equivalent to the emotion of gain of 200 yuan, which shows how much people are averse to loss.

The book also attributes this sentiment to the influence of the Malthusian era. Because in those days, unfavorable conditions such as drought often brought famine or even extinction; on the contrary, a good harvest can only temporarily improve life and promote reproduction. Therefore, those who survived in ancient times will be more cautious, and even if they lose a little potential profit, they must guard against catastrophic blows.

So loss aversion is an ancient adaptation to the threat of extinction.

This is a book about historical evolution from the perspective of natural selection. The perspective is quite special. I recommend everyone to read it.

This article is reprinted from: https://blog.devtang.com/2022/08/14/human-travel-book-summary/
This site is for inclusion only, and the copyright belongs to the original author.