On August 19, Huang Guangyu used an open letter to sound the rallying call, and several GOME retail reinforcements rushed to defend the capital.

At 9:00 that night, Gome Retail (0493.HK) announced that the company will officially resume trading at 9:00 on August 22. At the same time, Gome Retail announced that it plans to reorganize the company’s business segments, divest loss-making businesses, and inject part of the equity of two major property shareholders and Anxun Logistics to optimize asset structure, improve financing capabilities, and help listed companies improve profitability. 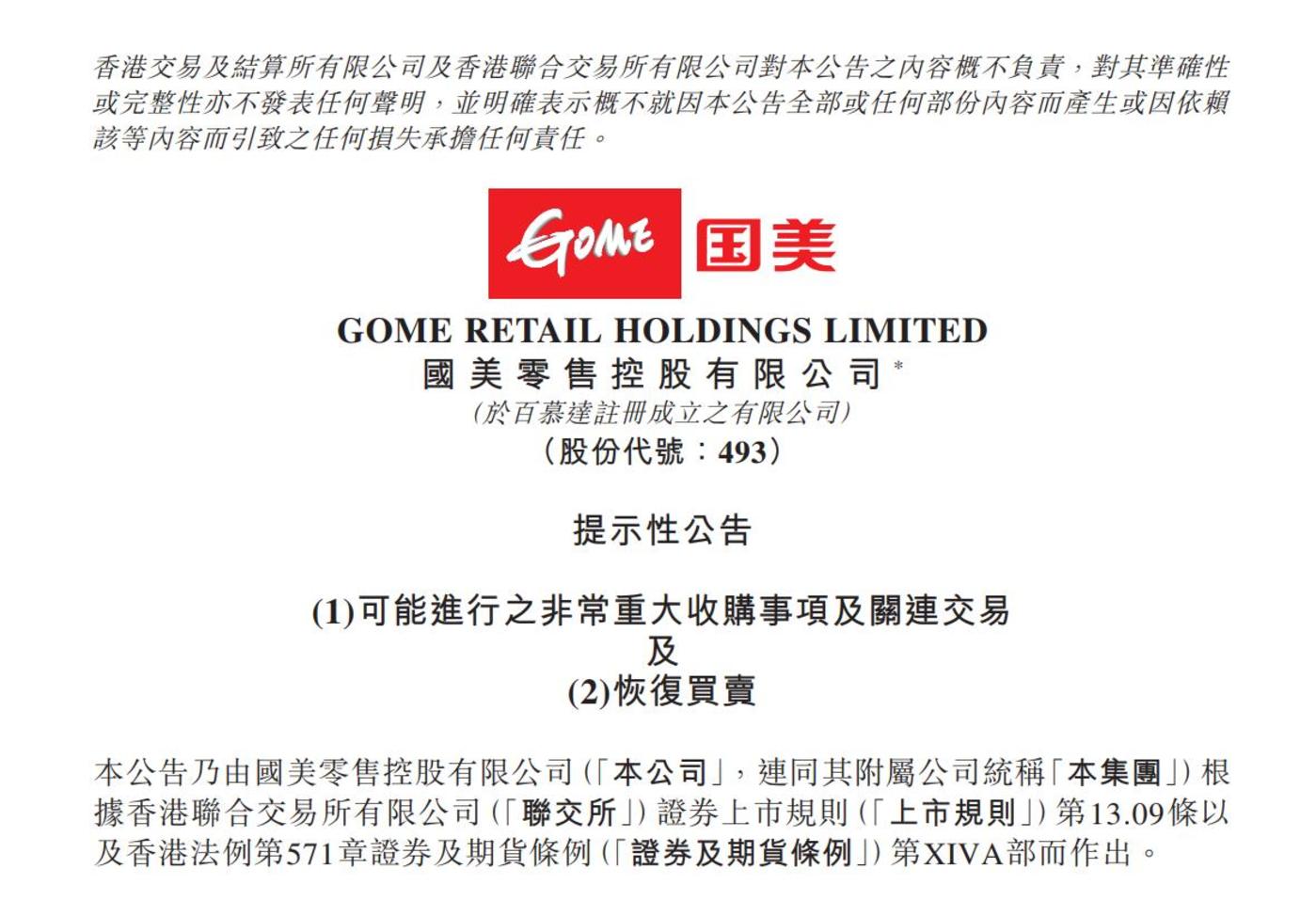 Focus on the core business, throw away the burden

It is worth noting that the reason for choosing this time point is that it has reached the critical point when Huang Guangyu previously issued the “18-month commitment”.

On February 18, 2021, Huang Guangyu, the founder of Gome, who attended the global investor conference call of Gome Retail , once said in a high profile, “Strive to use the next 18 months to restore Gome to its original market position.”

“It seems that time has changed, and we have not anticipated the difficulties of implementation. Coupled with the long-term disturbance of the epidemic, there is a certain gap between reality and this goal.” Today’s Huang Guangyu does not deny that the original goal was not completed as promised.

“In my bones, I am a born enterprising and pioneer.” But Huang Guangyu also bluntly said that Gome is about to “enter strategic focus and dormancy in order to survive this cold winter. I have experienced wind and rain, and I know very well that only if you recover it can you fight.” get out.”

In this open letter, Huang Guangyu also proposed a new “gambling commitment” to promote the management team to achieve better performance in the future, that is, to achieve the three-year strategic development goal of “1+1+1” – to achieve a better performance in 2023. It is highly profitable and has reached a high level in the past. It will reach the best level in history in 2024, and will significantly exceed the best level in history in 2025.

In order to realize the above commitments, Gome Retail has made the following series of measures to break the boat.

Third, for some unrelated or loss-making businesses, Gome Retail ‘s measures are to divest, sell or stop development, gradually reduce investment in high-cost businesses such as True Happiness, reduce the company’s pressure, and focus on developing core businesses.

At the same time, in order to increase the amount of tangible assets held, Gome Retail does not hesitate to repurchase “hard currency” to strengthen capital confidence.

First, on the premise of not diluting the interests of small and medium shareholders and not increasing the company’s cash flow pressure, Gome Retail acquired the entire equity of Pengrong Real Estate (Overseas) Co., Ltd. from the controlling shareholder at a substantially favorable price. Its main assets are Gome Shangdu and Xiangjiang The property rights of these two properties.

The intention of the above three steps is relatively clear. From the perspective of asset quality of listed companies, the injection of high-quality property assets and logistics assets can increase the cash flow and profitability of Gome Retail , and increase its own financing capacity, thus making Gome Retail’s finances healthier.

In terms of the strategic development of listed companies, due to the impact of the epidemic and other major environments, Gome Retail has made timely adjustments according to the development of the current situation, so that its own goals can be more focused, which is conducive to the coordinated development of the injected assets and business layout.

“Father of Competitive Strategy” Michael Porter once analyzed the diversified development history of 33 large American companies. He believes that when the scope of business activities of the company becomes more differentiated and the core business becomes more and more blurred, companies will appear. Benefit from the lubricating slope phenomenon. In today’s era of quick success, in order to achieve corner overtaking, what smart people need to do is to return to the core strategy.

Coincidentally, Harvard Business School professor Chris Zucker once put forward the “return to core theory”, which believes that only by focusing on the enterprise can it be like the annual rings of a tree, in a regular and organized method, from one or two people. A strong core expands into a range of adjacent businesses for steady and continuous growth. 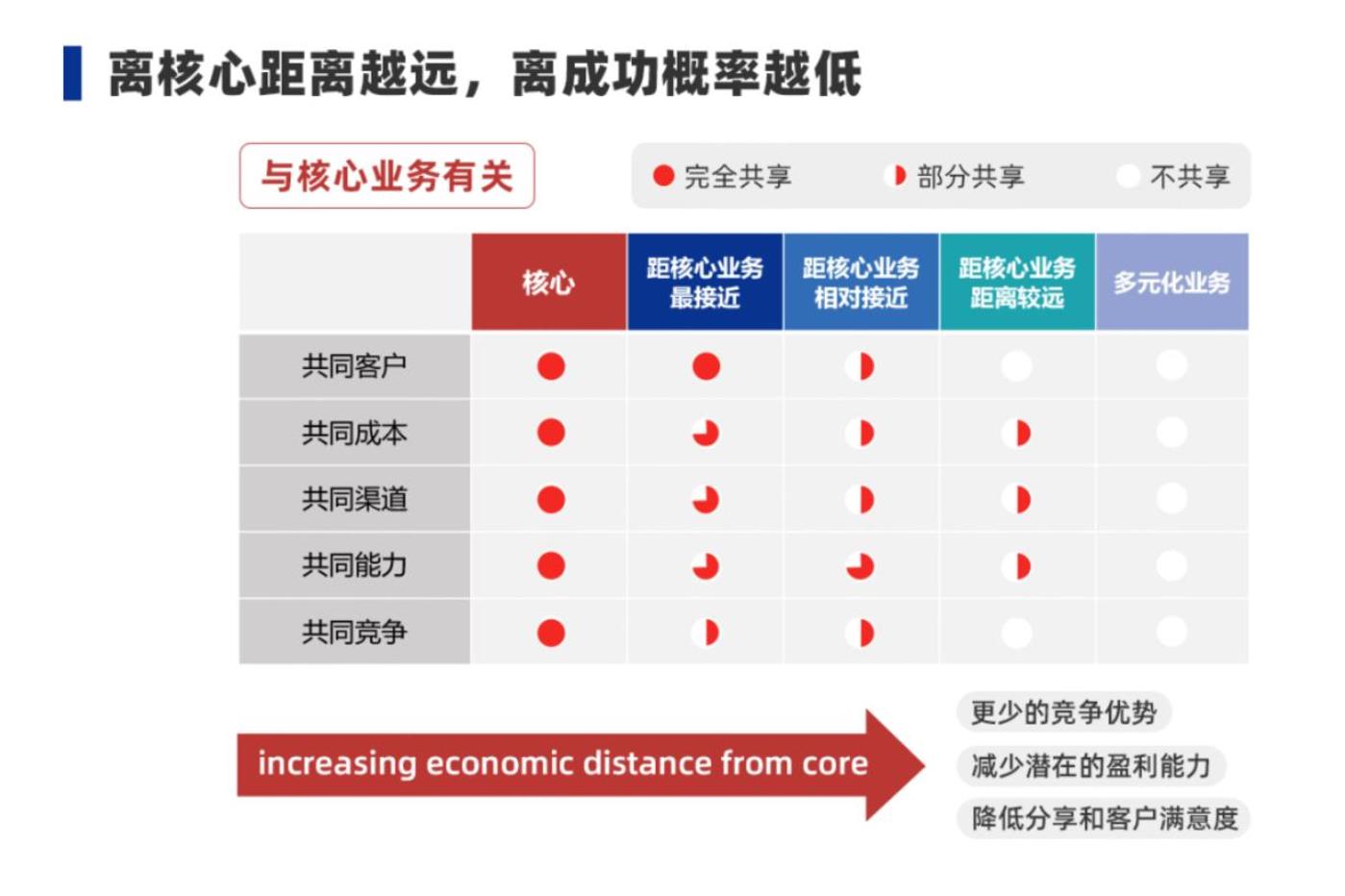 Zucker believes that “returning to the core does not mean giving up, making mistakes, retreating or even repeating. Returning means concentrating superior resources and concentrating on digging out the maximum value of the core business; Reflection and re-understanding of industrial laws and business logic is a sign of maturity.”

Indeed, when the enterprise develops to a certain stage, the sense of industry crisis makes many enterprises start to seize the market by expanding the scale and expanding the market area, but often the vast majority of them will stranded themselves in the blind expansion after a short-term profit growth. on the beach.

The precedent for successful expansion is Apple. Its traditional core business was originally Apple computers and operating systems, but it successfully expanded its business into the fields of music players, mobile phones and tablet computers, and achieved a far more revenue contribution from new businesses. The miracle of the traditional computer business.

The key reason for the success of Apple’s expansion is that Apple selectively entered adjacent businesses that could give full play to the advantages of its original core business, and achieved “adjacent expansion”.

For today’s Gome, it is clear that this is a broken arm of a strong man.

Ambitious Gome once tried to attack Internet e-commerce with all its strength, but after an 18-month trial run, it finally found that in order to achieve headwinds and make a perfect take-off under the long epidemic situation, it must continue to strengthen the bottom line. Work hard, especially continue to be more proficient in the land movements you are used to.

To this day, Huang Guangyu still expressed his belief in the team and still waited for the day when the Jedi counterattacked. He still insisted, “Work hard because of belief, and persist because of belief.”

For Huang Guangyu, who still has a lot of chips in his hand, he still wants to give it a try.

“Will 2022 be the most difficult year for companies in the future?” No one may be able to answer Huang Guangyu’s question, but time and history will eventually give him an accurate answer.

This article is reprinted from: https://readhub.cn/topic/8iC3iDakyLg
This site is for inclusion only, and the copyright belongs to the original author.