At the end of May this year, Huawei made a business adjustment and established a new machine vision army, but did not announce the specific appointments, which made the industry wonder what position Duan Aiguo was entrusted with?

The situation is now clear, as previously reported by Nuggets, “Newly Established “Machine Vision Corps”, Huawei’s Last Stand for Security” , Hong Fangming, the former president of Huawei Cloud China, served as the head of the Machine Vision Corps. Duan Aiguo was appointed as the CTO of the Corps and concurrently serves as the president of machine vision products and solutions.

Earlier, in a forum on July 20, Duan Aiguo delivered a speech as the CTO of the Machine Vision Corps. Immediately triggered a discussion in the industry: Is the CTO of the Legion a real job or a virtual job? Did Duan Aiguo move to the right or was demoted?

Now it seems that, apart from the CTO of the Legion, Duan Aiguo still has not given up his “old business” and is also the president of Machine Vision Products and Solutions. It can be said that he has at least kept the “basic market”. Speaking of itself.

1. The special features of the Machine Vision Corps

The predecessor of the Machine Vision Corps was the machine vision product line, which was renamed from the original intelligent security product line in early 2020, focusing on the security business.

In late May 2022, Huawei established the Machine Vision Corps.

Compared with most armies directly related to business scenarios, such as steel and coal digital finance, the machine vision armies do not have obvious industry characteristics.

That is to say, the Machine Vision Corps has no “business boundaries” and is not restricted by a certain industry scenario.

Some people may ask, isn’t there a security business?

Nuggets believe that the Machine Vision Corps will not give up the original security business, but has more important tasks.

Why do you say that?

As we all know, Huawei publicly entered the security circle in 2018, causing an industry earthquake. However, after the high-profile entry, the overall business has not grown bigger and stronger, which is far from the top three goals in the industry.

In fact, the security industry itself is relatively inward-looking. The pond is too small, and it is difficult to raise another big fish. Leading manufacturers are also expanding their boundaries. Huawei’s performance in the past two years is far from its slogan, and it has to catch up with Shanghai. Kang Dahua, almost impossible.

However, with its strong technical strength and products, Huawei can still win billions of shares. Although it is only a “drizzle” compared to the overall revenue of hundreds of billions, Huawei will not give up. After all, no matter how small a mosquito is, it is still meat. .

So what are the more important tasks?

Machine vision can be placed in security, industry, and consumer electronics. In Duan Aiguo’s words, “Huawei’s machine vision will become the entrance to the perception of all things.”

Therefore, from the beginning of 2020, Huawei itself has lifted the “curse” of security. As for Duan Aiguo’s “five-year No. 1 slogan” in May, on the surface, it was a declaration of war with leading manufacturers, but in fact it was more likely to be an internal propaganda, asking for money and people to do business, and this business is no longer limited to security.

Therefore, it is not difficult to understand that the more important task is to apply machine vision technology to a wider range of scenarios in addition to security to create a new growth curve.

As mentioned earlier, Huawei’s establishment of legions is to boost business, take orders, and increase revenue. Each legion has a market to conquer. But the Machine Vision Corps has no limited scenarios.

This means that the Machine Vision Corps is different from other legions, and it is more likely to play a middle-level organization, which is also called an industrial legion.

In other words, machine vision is responsible for the R&D and delivery of more products and solutions, and provides technical, data, product and other support for industry corps with single-point breakthroughs such as steel and coal, and the latter is responsible for surprise sales, operations and other services , the two are strategically coordinated with each other.

Nuggets believe that the security business, which is the main focus of the machine vision product line, is in a relatively awkward position internally: it is a pity to cut it, but it is difficult to make a substantial breakthrough by setting up an industry army alone.

Therefore, it is more reasonable to make machine vision a middle platform, and on the basis of retaining the security business, more energy will be used to empower other industry legions.

Duan Aiguo’s dual identity also proves this from the side.

2. Is it important to be a CTO in China and Taiwan?

The concept of Zhongtai first originated in the United States and was borrowed by Alibaba. Its transformation of “big, medium and small front desk” not only detonated “Zhongtai”, but also exploded in China, becoming an important part of the organizational structure of many enterprises. ring.

There are many reasons for Ali to establish Zhongtai, but there are three main points:

1. Build the underlying general platform, improve development efficiency, and change the development of various departments from 0 to 1 to 0.5 to 1;

2. Integrate business, reduce overlap and duplication of construction, and save costs;

Before Zhang Yong proposed the construction of Zhongtai in 2015, Ali’s overall business was divided into 25 business divisions, which were in charge of different people. Among them, the core two sectors, Taobao and Tmall, had overlapping parts of business. There is a certain competitive relationship between the two.

Under this relationship, as two independent departments, Taobao has to provide traffic to Tmall as support, which brings problems such as internal friction between departments and competition for group resources.

Fundamentally, these problems are caused by the organizational structure itself.

The linear functional system is very common in domestic enterprises. The company is subdivided into multiple departments, such as the technical department, the financial department, the marketing department, etc., and these departments are in a level position, and there are barriers to cross-departmental communication. For example, there are often technical and Pinch between products, products and markets do not deal with other phenomena.

In order to avoid the shortcomings of the linear functional system and meet the needs of the development of multiple business lines, many companies have begun to use the division system. Each business unit has independent technology, product, market and other departments, responsible for its own performance goals.

The advantage of the divisional system is that it can break down departmental barriers, improve communication and R&D efficiency, and achieve a single breakthrough in a certain business line; however, there are also some disadvantages: each division is burdened with its own KPIs, and the competition for group resources is fierce. It is beneficial for each business line to compete with competitors in the industry, but internal friction is actually not conducive to the development of the group itself.

Therefore, in 2015, Ali proposed to build Zhongtai, which is actually to transform the original division system into a matrix system.

The characteristic of the matrix system is that in the vertical management mode, horizontal management emerges, thus breaking the independent situation of each department in the linear functional system. 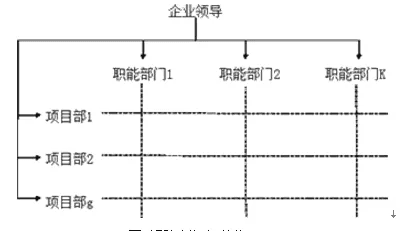 It can be understood as follows: the resources of each functional department become modules. When new market demands or opportunities arise, the company can quickly allocate human and material resources to form a project team for product development and iteration, which improves the operational efficiency and flexibility of the organization. sex.

Ali’s “big, middle, and small front desk” is to set up a middle office horizontally within the organization, which includes technology, data, product capabilities, etc.; Taobao and Tmall are the front desks. No matter which front desk raises the demand, Zhongtai can set up a project team at the fastest speed to solve the pain points of the front desk.

Therefore, being in charge of technology in the middle office, although not directly managing the specific business of the front desk, the requirements for the CTO itself are not low. After all, the main role of the middle office is to empower countless small front desks. These small front desks have different industries and needs. It is also different. One of the responsibilities of the CTO is to establish a link between technology and business. If you don’t understand business, how to engage in technology?

So there is no doubt that this position is important.

3. From the change of organizational structure, see the positioning of the machine vision army

Inside the Huawei Industry Corps, there are scientific research experts, design experts, engineering experts, and sales experts. This ratio is somewhat similar to the division system. Each legion is a division. Internal synergy is formed to achieve rapid delivery from research and development to products.

In fact, it is more inclined to the matrix system.

Each industry corps is actually for a large project (revenue), and engineers with corresponding capabilities are extracted from each department to form a team to carry out market research, that is, a “front desk”.

However, Huawei has not yet formed an obvious “middle-stage, front-end” relationship, at least not directly setting up a middle-stage business group like Ali.

If the industry corps is understood as the “front desk”, then who is more appropriate to assume the role of “middle stage”?

As we all know, the background of Huawei’s establishment of the army is to seize the opportunity of digital transformation and attack the To B/G business.

Vision can cross industry boundaries and can be used as an entrance to collect data in different scenarios.

Therefore, it is not impossible for the Machine Vision Corps to assume the functions of the middle stage. It is not yet known whether other capabilities will be added in the future, but just relying on machine vision to provide visual capability support for other industry legions already implies some characteristics of China and Taiwan.

Therefore, Duan Aiguo was appointed as the CTO of the Corps on the basis of the president of Machine Vision Products and Solutions, probably to prepare for the establishment of a middle platform.

After the reform of “big, middle and small front desk”, Xingdian served as the president of the middle and Taiwan business group, and soon became the group CTO. Therefore, Xingdian is actually pushing for organizational reform as a CTO, establishing a strong middle office to serve the two front desks of Taobao and Tmall.

As for whether Duan Aiguo will replicate Xingdian’s path, it is unknown.

This article is reprinted from: https://www.leiphone.com/category/smartsecurity/FBGFp6p9uqU83cKn.html
This site is for inclusion only, and the copyright belongs to the original author.