I once dreamed of walking around the world with a sword, but I was busy with work later.

As a brick mover in modern society, every day is filled with trivial matters of work and life, and there is no way to express the resentment in my heart. Only by guarding the heart of Gensokyo can I get a trace of solace. For me, the martial arts world is the sustenance of my soul.

From the martial arts novels that were secretly pressed under the textbooks when I was a child, to the martial arts games with beautiful pictures and free gameplay, all of them have created a fantasy world of swords, swords and shadows, happy and grudges for everyone. The reason why martial arts can occupy a place in the hearts of players is inseparable from the cultural influence of nearly a thousand years and the development of games for nearly 30 years.

The earliest record of martial arts may be traced back to the Western Han Dynasty’s “Historical Records: Ranger Biography”. It records Sima Qian’s evaluation of the chivalrous man: “Today’s ranger, although his actions are not righteous, he must be faithful in his words, his actions must be fruitful, his promises must be sincere, he does not love his body, and he goes to the plight of a soldier. Well, if you don’t boast about your abilities, you are ashamed of your virtues, and there are plenty of them.” The article elaborates on the characteristics of chivalry, which are also the reasons why chivalry is sought after by everyone. 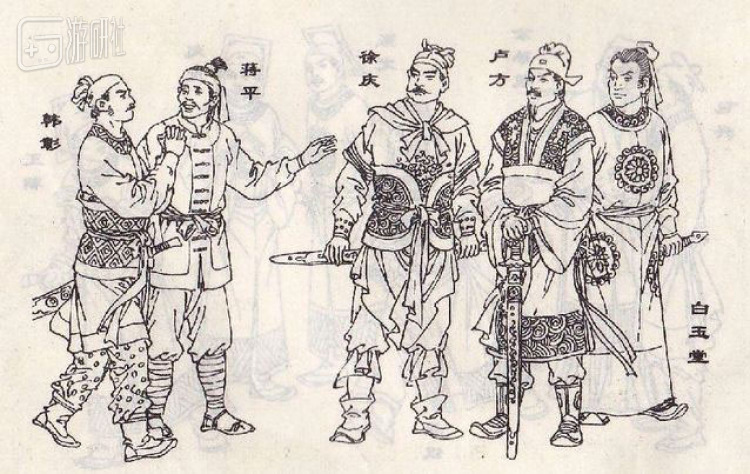 After the Revolution of 1911, the Chinese people’s minds have been liberated to a certain extent, and martial arts novels have emerged as the times require, and excellent works have emerged one after another. But for our generation, the most influential works are the works of new martial arts novelists such as Jin Yong, Liang Yusheng, Gu Long, and Wen Ruian.

There are two main reasons for the attraction of martial arts novels: external and internal. The external factor is the overhead element of various mysterious legends in martial arts, and the internal factor is the core concept of the martial arts world, which is the simple value of pleasure, kindness and hatred, plus the freedom of behavior that does not need to be engaged in production. External because of martial arts, internal because of chivalry. Wu is the form of expression, and chivalry is the spiritual core.

In 1991, “The Legend of Heroes” appeared in the public eye as the first truly complete martial arts role-playing game, which started a new round of martial arts craze.

In 1993, Zhiguan successively launched “Swordsman” and “The Legend of the Condor Heroes”, which can be regarded as the beginning of Zhiguan’s Jinyong Road. The following year, “The Legend of the Deer and the Ding of the Imperial City” and “The Legend of Heaven and Dragon Slayer” were successively launched. “Eternal Dragon Slayer” can be said to be a milestone in the same series. It has achieved great success in terms of gameplay, but its shortcomings cannot be ignored. The operation is too anti-human, and the gameplay feels extremely poor. 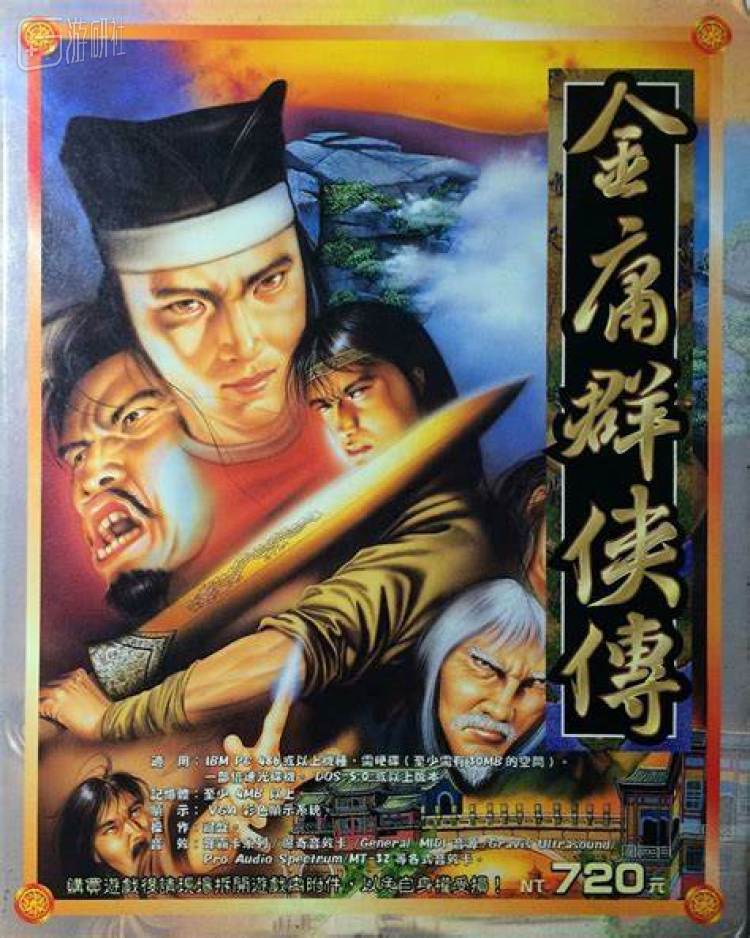 “The Legend of Jin Yong Heroes” uses popular characters and plots written by Jin Yong to build a world view, puts together the main characters and plots of different books, and uses the search for “Flying Snow Shoots White Deer, Laughing Book God Hero leans on Bi Yuan” ten The four books are connected in series as the main thread. Let players participate in the legendary stories in the world of Jin Yong, allowing players to make choices between good and evil.

In terms of gameplay, players can invite martial arts heroes from all walks of life to take risks with themselves. In this open martial arts world, making friends with knights, experiencing adventures, obtaining martial arts secrets, and obtaining legendary weapons, all of these gameplay mechanisms make players feel ecstatic. Realize the inner pleasure and revenge and swordsmanship. In addition, in order to better demonstrate the chivalrousness of the martial arts world, there is also a moral mechanism in the game. Player behaviors have an impact on moral values, and moral values ​​will affect the members who can join the team, the exercises that can be learned, and the plot direction. The moral value system improves the player’s sense of substitution, and also conveys the concept of righteousness and evil in the martial arts world to the player from the side. It is a method of shaping the game world through game mechanics.

And the small map of this game reflects the characteristics of video games at the end of the last century-paper strategy books. Due to the limitation of the era, there were not many players who bought genuine games at that time, and there was no small map in the game. When playing, you could only rely on the compass coordinates to find the way. In fact, the game map is included in the traditional version, but the simplified version may not. 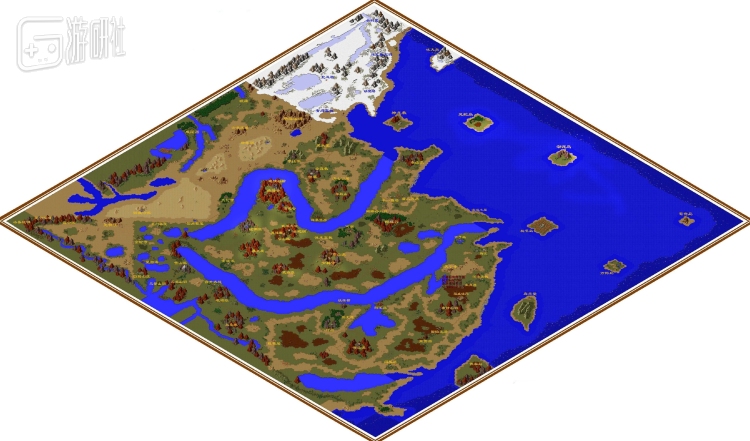 It has been more than 20 years since “Jin Yong Heroes”, Chinese players’ enthusiasm for martial arts games has never diminished, and game types are also flourishing. From action games to chicken-eating games to meat pigeon games, the types of games we love are constantly changing. Although they still have the sword, light, sword and shadow of martial arts, it is difficult for players to lift their swords into the rivers and lakes. Maybe we are still looking forward to traditional martial arts games. 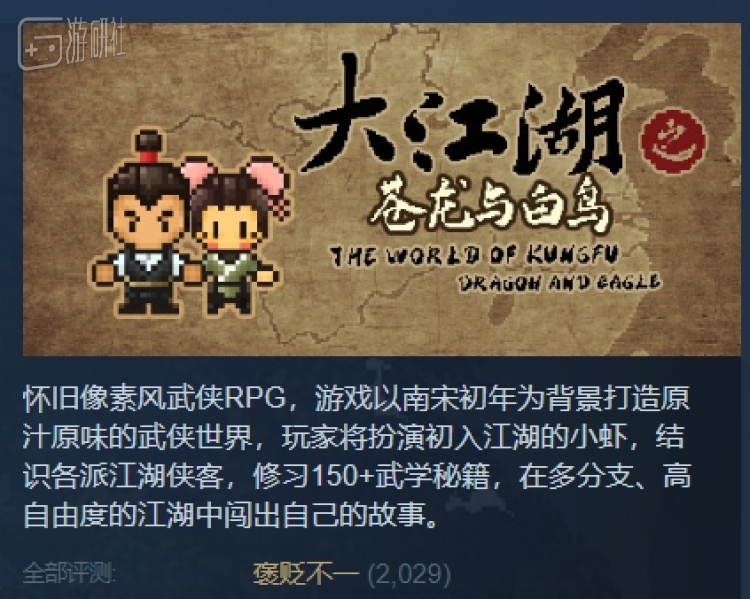 The comparison results are obviously unsatisfactory. For players’ dissatisfaction with it, please refer to the Steam evaluation area. Except for the anti-human design such as movement speed and archives, the most unsuccessful ones are the outrageous numerical settings, which not only cannot meet the normal play curve, Moreover, such a value obviously cannot satisfy the player’s dream of becoming a knight. After all, no knight wants to be chased and beaten by robbers. Now it seems that perhaps the existence of the ten-level wild ball boxing in “Jin Yong Qun Xia” is precisely to allow players to experience the thrill of “killing a person in ten steps, leaving a thousand miles behind.

The third is the depiction of the world of martial arts in the big rivers and lakes, which is very rare. As a result, the game lacks the core of the charm of martial arts games – exploration. Whether it is walking around the world with a sword or rushing through the rivers and lakes with a sword, the essence is the exploration of the unknown world, which is also one of the main selling points of RPG games. However, “The Dragon and the White Bird of Great Rivers and Lakes” has almost no details. Whether it is NPC dialogue or independent investigation, the side description of the whole world is too lacking, and there is nothing to explore. It makes players uninterested to learn more about this thin river and lake, coupled with the operation and difficulty to persuade them to quit, it is true that they have failed to create the martial arts world in the minds of players.

To sum up, what players want more may be “the winding path leads to the secluded to obtain the treasure book of secrets, the accidental encounter with the hermit master, the low morality makes it difficult to advance the plot, and stands at the peak of the martial arts as one against ten”. But after all, it is not the official version yet, and the author is also listening to the opinions of players to make changes. The work is still promising in the future. The situation in the world is beyond my generation, and as soon as I enter the rivers and lakes, the years will remind me. In Huangtu Baye’s jokes, it is a drunken life.

In the sequel, we sneaked into the Shaolin Temple and learned Yi Jin Jing, chased half a bottle of fairy vinegar to defeat him 20 times in order to create our own martial arts. The work of Half Bottle of Immortal Vinegar is undoubtedly the best sequel in the hearts of players, but with the passage of time, Half Bottle of Vinegar seems to have been forgotten by us.

On August 25, 2022, half a bottle of immortal vinegar officially returned to the arena, and with him came the brand new martial arts game “The Legend of Heroes”. The story begins in Wuming Village, and the protagonist is still the familiar little shrimp. It seems that we have to walk the rivers and lakes again, reproduce a martial arts dream, follow the protagonist to climb and roll, and then climb to the peak of martial arts. According to the small amount of information released, this trip we can not only experience the fighting and killing of the rivers and lakes, but also experience the sophistication of the rivers and lakes. The game has intricate interpersonal forces and a rich NPC interaction system, as well as a high degree of freedom of gameplay that is not limited to solving problems with fists. The battle system still retains the original battle flag gameplay. Of course, I believe that more players want to throw half a bottle of vinegar into the water again in the new game. At present, the game is in the confidential testing stage. Whether the game can still capture the hearts of martial arts players based on the combination of modern game culture, let us wait and see.

As a cultural work, the game is more to meet the spiritual needs of the players, and contains the martial arts theme that the majority of people yearn for a better life. The shaping of the plot should be given the first place. Only when players are spiritually satisfied can the game be recognized.

In terms of gameplay, traditional martial arts games do not necessarily require all traditions, but the core gameplay tradition can be described as tradition. Operating systems, artistic expressions, etc. can completely abandon the tradition, and cannot put the cart before the horse, and mechanically apply the mechanisms generated by technical limitations in the past to modern games.

This article is reproduced from: https://www.yystv.cn/p/9657
This site is for inclusion only, and the copyright belongs to the original author.