Excluding volatile food and energy prices, the U.S. core CPI rose 6.2% on an annualized basis in April on a seasonally adjusted basis, beating expectations for a 6% increase. After the CPI report was released, U.S. bond yields rose sharply, with the 10-year U.S. bond yield exceeding 3%. The report showed that persistently soaring inflation has pushed U.S. consumers to the brink of collapse and threatened an economic expansion.

On May 12, the U.S. Senate voted on Thursday, local time, to approve Jerome Powell’s re-election as chairman of the Federal Reserve. Powell said his main task was to control inflation, but acknowledged that the process could be painful. Powell first joined the Federal Reserve Board of Governors in 2012. In March 2020, at the start of the Covid-19 outbreak, he led the Federal Reserve to cut its benchmark interest rate to zero and pump money into the financial system to prevent a deep recession in the world’s largest economy.

At 2 pm ET on May 12, the US dollar index (USDX) broke through 104.9, hitting a new high since November 2002. The primary factor supporting a strong dollar under high inflation is still the Fed raising interest rates and expectations of interest rate hikes. The U.S. consumer price index has climbed from 4.9% in May 2021 and hit a nearly 40-year high of 8.5% in March. Although the 8.3% consumer price index in April fell slightly, it still exceeded market expectations.

On May 12, local time, Biden announced that the death toll from the new crown in the United States reached 1 million. Recently, due to the new subtype of the Omicron variant, the epidemic situation in the United States has once again increased, and the average number of new cases in the seven days has again approached 100,000.

Euro zone inflation rose to 7.5% in April from 7.4% in March as core pressures intensified, hawkish members of the ECB’s Governing Council prevailed in a fresh debate with central banker Christine Lagarde hinting at a July rate hike.

The Organization of the Petroleum Exporting Countries has warned that the disruption to global energy supplies from the Ukraine crisis and the resulting surge in oil prices will hurt economic growth and, in turn, curb oil demand.

Although demand forecasts continue to be lowered, risks on the supply side are still a more worrying factor for the market. IEA Director Birol emphasized that “the oil market may face challenges this summer”. He also said that if necessary, the IEA may release in the future. more oil.

On May 9, the central bank released the “China Monetary Policy Implementation Report for the First Quarter of 2022”. In the first quarter, the central bank insisted on maintaining stability and seeking progress while maintaining stability. The prudent monetary policy was flexible and appropriate, and the policy force was appropriately advanced to promote the stability of the macroeconomic market. 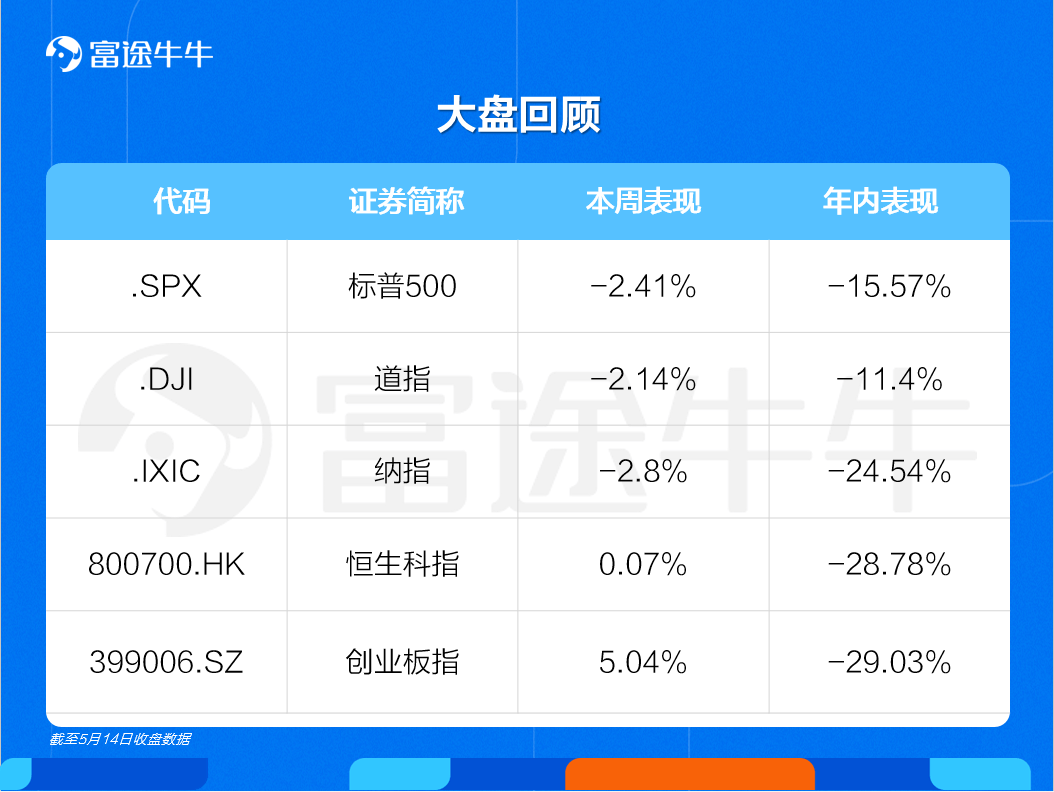 After the slump, the market has different voices

Strategists from the liquidity research department of JPMorgan Chase (JPM) believe that long-term capital outflows are unlikely to occur . From the perspective of positioning, he said that in the short term, U.S. stocks are getting closer to bottoming out .

Another strategist believes that from the perspective of US stock valuations. Based on 2023 forecasts, the S&P 500 trades at 15.8 times earnings per share (EPS) of $249, compared with 17.3 times this year’s forecasts and EPS of $228; Bloomberg data shows that the market expects the The average price-to-earnings ratio for the index is 16.9 times. That said, the stock isn’t cheap right now for investors and would need a deeper pullback to buy .

Goldman Sachs strategist Peter Oppenheimer thinks investors have priced in a lot of negative sentiment, suggesting a buying opportunity after the rout .

Morgan Stanley’s long-term bearish chief equity strategist Michael Wilson reiterated in the latest report that the stock market slump is not over yet , and as concerns about slowing economic growth intensify, he believes that there is still room for further corrections in U.S. stocks.

Betting on rate hikes pours into the safe-haven dollar,

Gold falls under pressure, can it turn the tide?

The safe-haven dollar climbed to a fresh 20-year high and gold was less attractive to holders of other currencies amid fears that tightening monetary policy to curb surging inflation would hurt the global economy. While gold is considered a hedge against inflation and a safe bet during economic and political turmoil, it is highly sensitive to rising U.S. interest rates, which increases the opportunity cost of holding non-yielding bullion.

In this regard, the head of commodity research at Kotak Securities said: The market’s concerns about inflation and the unresolved tensions between Russia and Ukraine continue to be the “bottom” for gold prices. Therefore, although the trend of gold prices is weak, the overall downside is limited.

MKS PAMP: The pace of the Fed’s monetary tightening affects the future of gold prices

According to analysis provided by MKS PAMP, gold prices have two options: fall to $1,300 an ounce or surge to $4,000 an ounce. But it all depends on how fast the Fed tightens monetary policy:

According to the slow rate hike cycle, that is, gradually raising interest rates, the price of gold may reach $4,000 per ounce within five years;

On the other hand, a rapid upswing cycle could trigger a sharp sell-off in gold, with prices falling to $1,300 an ounce in five years.

MKS PAMP suggests that the decline in gold prices is getting smaller. If it is really a bear market, the international gold price should be much lower than $1,850 an ounce.

Recently, a number of “value-oriented” fund managers have expressed their optimism about Hong Kong stocks, especially the Internet sector. Qiu Dongrong wrote in the latest quarterly report, “Hong Kong stocks have undergone substantial adjustments. From the perspective of valuation, fundamental factors and liquidity, we believe that the opportunities for Hong Kong stocks have changed from structural opportunities to systematic opportunities, which are worthy of strategic allocation. ” He believes that growth stocks represented by the Internet, technology, and medicine have fallen to a very attractive level, and many constituent stocks in the Hang Seng Technology Index have retreated by more than 80%. The cheap valuation can be well in line with its low price. Stock selection criteria for valuation value investing strategies.

CICC believes that in addition to policies, there may also be some positive changes in domestic and overseas fundamentals in May. It is recommended to be cautiously optimistic about risk assets, moderately overweight A shares and Hong Kong stocks, and increase overseas assets from underweight to standard. The domestic stock index has benefited from the marginal improvement of the epidemic and policy support, while the valuation is relatively low. The risk premium suggests that the stock index is expected to outperform the debt index by more than 15% in the next year. From the perspective of liquidity, the credit pulse also suggests that the domestic stock index will perform well in the next 1-2 quarters.

Morgan Stanley Huaxin Fund: Overseas market adjustment will not change the trend of A-shares itself

Morgan Stanley Huaxin Fund said that fluctuations in overseas markets will trigger the next day’s trend in the A-share market, but most of the time it does not change the running trend of A-shares themselves. At present, under the keynote of “resolutely winning the battle to defend the Greater Shanghai”, the epidemic prevention and control policy is expected to be further implemented. With the improvement of the epidemic trend in Shanghai, the supply chain of related industries is expected to be repaired. After the plan to raise interest rates and shrink the balance sheet in May is superimposed, the US bond interest rate has entered a wide range of fluctuations, and the growth sector is expected to usher in a rebound.

This article is reprinted from: https://news.futunn.com/post/15545605?src=3&report_type=market&report_id=205627&futusource=news_headline_list
This site is for inclusion only, and the copyright belongs to the original author.