$ Netflix (NFLX.US) $ The first-quarter 2022 earnings report released after the US stock market on Tuesday was once again surprising, and major Wall Street banks have also lowered their target prices on the stock. U.S. stocks opened on Wednesday, and Netflix fell more than 30%.

According to the financial report, Netflix’s total revenue in the first quarter was $7.87 billion, a year-on-year increase of 9.8%, but lower than the market’s expected $7.93 billion; diluted earnings per share were $3.53, down nearly 6% from $3.75 in the same period last year. , but above analysts’ expectations of $2.89.

However, the indicator of global net increase in paying users, which investors are most concerned about, unexpectedly showed negative growth . The loss of 200,000 global paid subscribers in the first quarter was the first negative value since 2011, while Netflix had previously expected an increase of 2.5 million. In addition, Netflix’s second-quarter guidance was also disappointing. The company expects to lose 2 million paid users worldwide in the second quarter, compared with the market’s forecast of 2.4 million new additions. 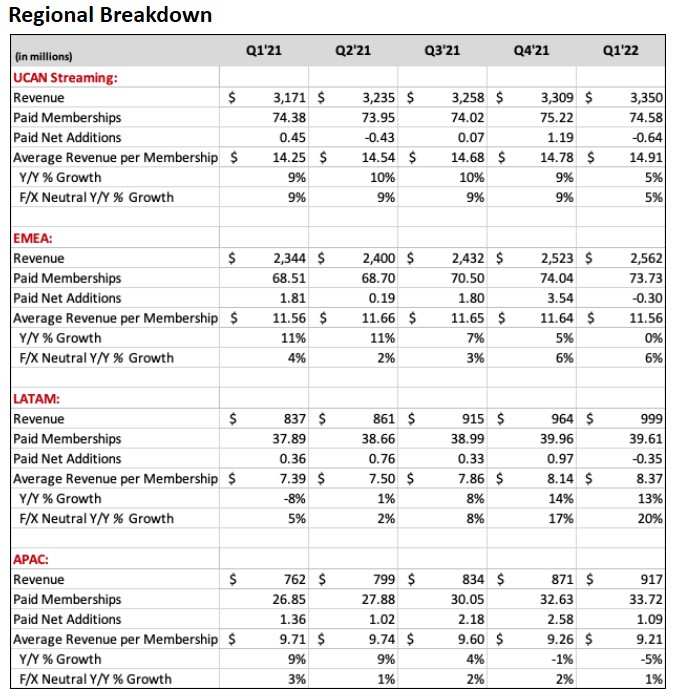 Netflix said in a letter to shareholders that “revenue growth has slowed significantly”, the entry of traditional media has led to increased competition in the streaming media industry, household penetration has been relatively high, and more than 100 million households worldwide share accounts with others, inflation is eroding people The budget allocation for non-essential items such as subscription services, as well as the temporary withdrawal from the Russian market and the closure of user accounts, all adversely affected revenue growth.

After Netflix’s really “ugly” earnings report was announced, major Wall Street banks lowered their target prices for the stock. The following are some investment banks’ views on the stock:

Deutsche Bank analyst Bryan Kraft lowered his price target on Netflix to $300 from $465 and maintained a “hold” rating on the stock.

Analysts said that while the first-quarter results fell short of market expectations, Netflix management is making a strategic and tactical shift to focus on “how to best monetize the phenomenon of different households sharing the same account,” and to launch a strategy that includes Advertising subscription services. Given that Netflix is ​​now “on the flattened part of the demand curve in most Western markets,” these measures will be needed to re-accelerate growth. Analysts said Netflix is ​​expected to experience accelerated growth again in the second half of 2023 and in 2024 .

Stifel analyst Scott Devitt lowered his price target on Netflix to $300 from $460 and downgraded the stock to “hold” from “buy”.

“All good growth stories come to an end eventually,” the analyst said. Analysts pointed to Netflix’s first-quarter and second-quarter guidance as “disappointing,” with the company posting negative user growth in three of its four major regions.

Analysts said Netflix still needs to address some longer-term issues, including increased competition, the possibility that its core market has matured and the prevalence of shared account behavior, which could be a drag on its growth. Analysts say subscription services that include ads and increased monetization of shared accounts are in the early stages of development and won’t be possible until the second half of 2023.

Piper Sandler analyst Thomas Champion lowered his price target on Netflix to $293 from $562 and downgraded the stock to “neutral” from “overweight.”

Analysts pointed out that Netflix lost 200,000 subscribers in the first quarter, which was significantly lower than the 2.5 million newly expected by the market; the company’s management pointed out a series of problems affecting the future growth of subscribers, including the macro environment, shared accounts and increased competition.

Analysts said Netflix’s user loss will continue into the second quarter, and its revenue growth slowdown may continue into 2023, “this is a low-growth, low-visibility model, which prompts us to stay on the sidelines.”

Barclays analyst Kannan Venkateshwar lowered his price target on Netflix to $275 from $380 and maintained a “wait-and-see” rating on the stock.

Analysts said that even the most pessimistic forecasts did not expect negative user growth in three of Netflix’s four main regions, and such negative user growth could occur in the second quarter. Analysts also pointed out that Netflix itself does not appear to be bullish on near-term margin growth, saying it depends on a re-acceleration of revenue growth.

Pivotal Research lowered its price target on Netflix to $235 from $550 and downgraded the stock to “sell” from “buy”.

Analysts believe that Netflix’s consideration of launching a subscription service that includes advertising but costs less is a negative impact, “comparing to the current good consumer experience, this move reduces the value of the brand and product.” The analyst noted that in a period of rising interest rates, slumping profitability could make the stock “unpopular with the investment community.”

This article is reprinted from: https://news.futunn.com/post/14693218?src=3&report_type=market&report_id=203552&futusource=news_headline_list
This site is for inclusion only, and the copyright belongs to the original author.