In the hot spring home buying season, Boise, the nation’s fastest-growing home price, saw zero gains. Morgan Stanley pointed out that U.S. mortgage rates will continue to rise, while home price growth is likely to slow sharply over the next 12 months.

Amid the traditionally hot spring home buying season in the U.S., the housing boom is showing signs of fading. Home price growth in Boise, Idaho, slowed sharply to just 0.4% year-over-year last month, down from 4.1% in June last year.

Last year, under the easing policy of the Federal Reserve, mortgage interest rates fell, and the demand for home purchases in the United States was strong. In addition, the change in housing concepts caused by the epidemic and the influx of millennials into the housing market have also driven the growth of housing demand, and housing prices in multiple cities represented by Boise have soared.

However, as the Federal Reserve started the rate hike cycle, mortgage rates have soared, with the average rate on 30-year fixed mortgages rising to 5% for the first time in 10 years on Friday, and continuing to rise. Coupled with the hugely high housing prices, housing affordability is fast. deterioration.

Rapid housing price growth is unsustainable, and the fading boom in the U.S. housing market first started in Boise.

Previously, Morgan Stanley analyzed the housing prices and sales in five periods in the history of the U.S. real estate market in which “loan interest rates climbed more than 100 basis points within half a year” in the report. Combined with the background of this high loan interest rate, it was concluded:

Existing home sales are likely to peak and stabilize or decline, and house price growth is likely to slow sharply over the next 12 months.

The low tide begins in the hottest markets

During last year’s real estate boom, the inland city of Boise, the capital of Idaho, became the hottest real estate market in the United States.

Due to the mild climate and strong education system, a large number of California residents have flocked to the area to buy homes during the epidemic, and the Boise real estate market has boomed and prices have risen sharply. Home prices in the Boise metropolitan area are more than 76% above the long-term trend line, according to Florida Atlantic University research.

And when momentum reverses, the markets with the highest valuations are hit first. Home prices in Boise are stabilizing. According to data from Zillow, an online real estate company in the United States, the average home price in Boise rose only 0.4% last month, much lower than the 4.1% in June last year, making it among the 100 largest residential markets in the United States. The first market to show a downward trend. 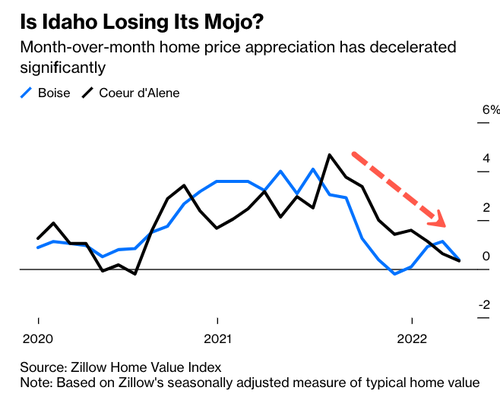 Not only Boise, but other hot cities during the epidemic have also been affected. Jonathan Levin pointed out that the economic slowdown has brought a shock to some western cities, and the housing prices in Austin, the capital of Texas, Phoenix, Tampa, Florida and other places will also be affected.

Incredible growth rates are unsustainable, and slowing demand could mean prices will eventually reverse. Zillow senior economist Jeff Tucker warns that cities with the biggest home price increases will be hardest hit by a recession due to population movements.

Last week, the average rate on a 30-year fixed mortgage rose to 5 per cent for the first time in a decade, sparking an affordability crisis. Bank of America economist Alex Lin recently noted in a report that housing affordability is now at its lowest level since 2007, the year before the housing bubble burst. 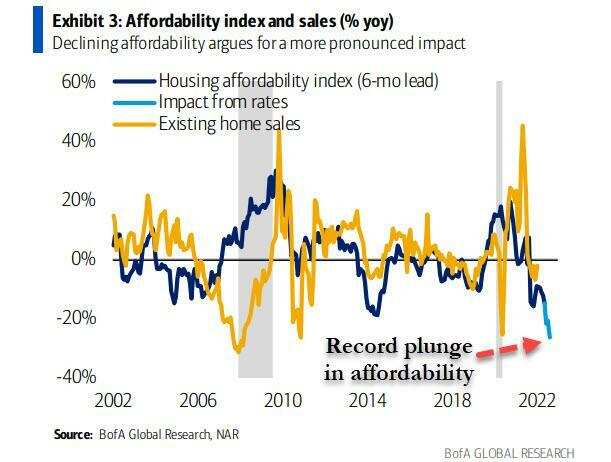 The National Association of Realtors (NAR) recently estimated that as many as 9 million home buyers could give up on buying a home this year due to rising interest rates.

But there are also voices pointing out that slower growth doesn’t necessarily mean prices will start falling. Overall, unless interest rates rise significantly, housing inventory near record lows could boost prices to some extent. Unlike when the housing bubble burst, household finances are strong right now, with many homebuyers locking in long-term mortgage rates below 3%, so they have little incentive to rush to buy.

Learning from History: What Happens When Mortgage Rates Rise Rapidly?

As mortgage rates climb rapidly, and home prices continue to rise, what will happen to home sales and prices?

Morgan Stanley analysts analyzed in previous reports, Morgan Stanley selected the period since 1990 when mortgage rates rose by more than 100 basis points in half a year, namely April/August 1994 and 1996. June/July, August/October 1999, July 2008 and June/September 2013. 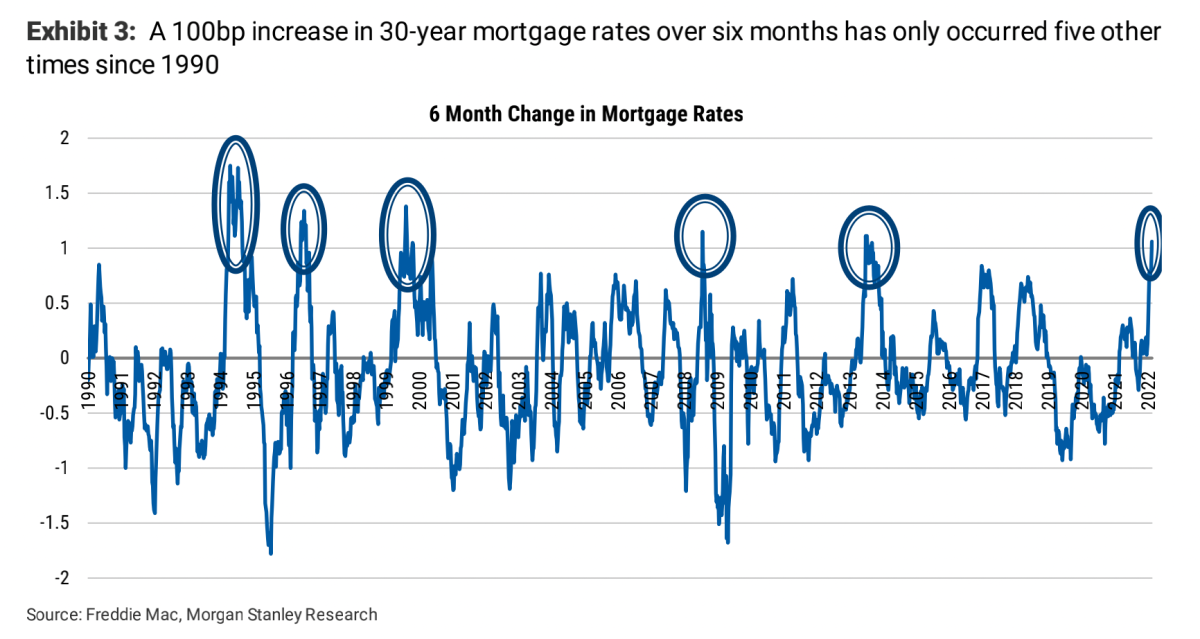 1. Home sales: Mortgage rates rise during periods of climb, then peak and stabilize or decline

In terms of home sales, first look at existing home sales in the United States. Except for the 2008 subprime mortgage crisis (GFC), at other times, the seasonally adjusted annual rate (SAAR) of existing home sales rose during the period of rising mortgage rates, and reach the highest level.

The NSA Index of National Home Prices in the United States shows a similar picture, with sales rates tending to rise during periods of rising interest rates. For now, NSA existing home sales have actually fallen 2% over the past five months, despite a strong SAAR.

The same is true for new home sales, but with a slightly different picture due to their slightly more volatile nature. Home sales rise during periods of rising interest rates and then level off. SAAR sales began to decline 9-12 months after mortgage rates rose sharply. Looking at the NSA index, excluding seasonal adjustments, new home sales are falling in the current environment.

Looking at house prices, like home sales, house prices also rise during a six-month period when interest rates rise. Meanwhile, annual home price appreciation (HPA) during this period tends to be between 2-10%. The difference is that in the months since 2022, HPA has been close to 20%. The combination of rising house prices and a sharp rise in mortgage rates has led to unprecedented increases in monthly mortgage payments for home buyers.

HPA levels remained high during this time period if one tried to control for income variables. Historically, income-based loan repayments appear affordable due to low interest rates. What’s different this time is that housing affordability has deteriorated rapidly over the past 12 months (Exhibit 13).

What will happen to home sales and house prices this time?

Affordability has deteriorated rapidly over the past few months, in part due to a very tight housing supply, with existing housing stock at an all-time low. 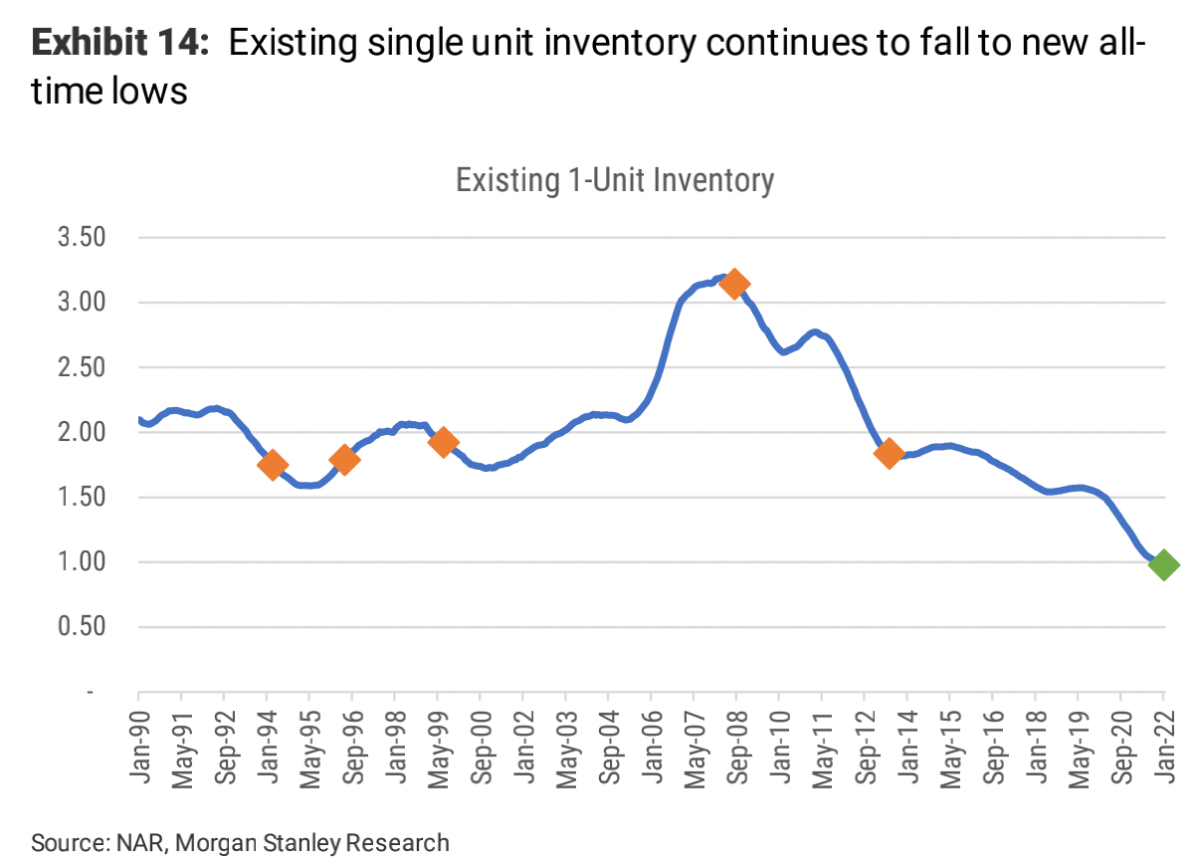 Historically, inventory levels have varied over 5 periods, but have never been as low as they are today. And it’s not just existing inventory that is tight, it’s new inventory as well. The housing completion rate has been increasing, but after the GFC period, it only recovered to its original level in July 2008, and before that in 1992. 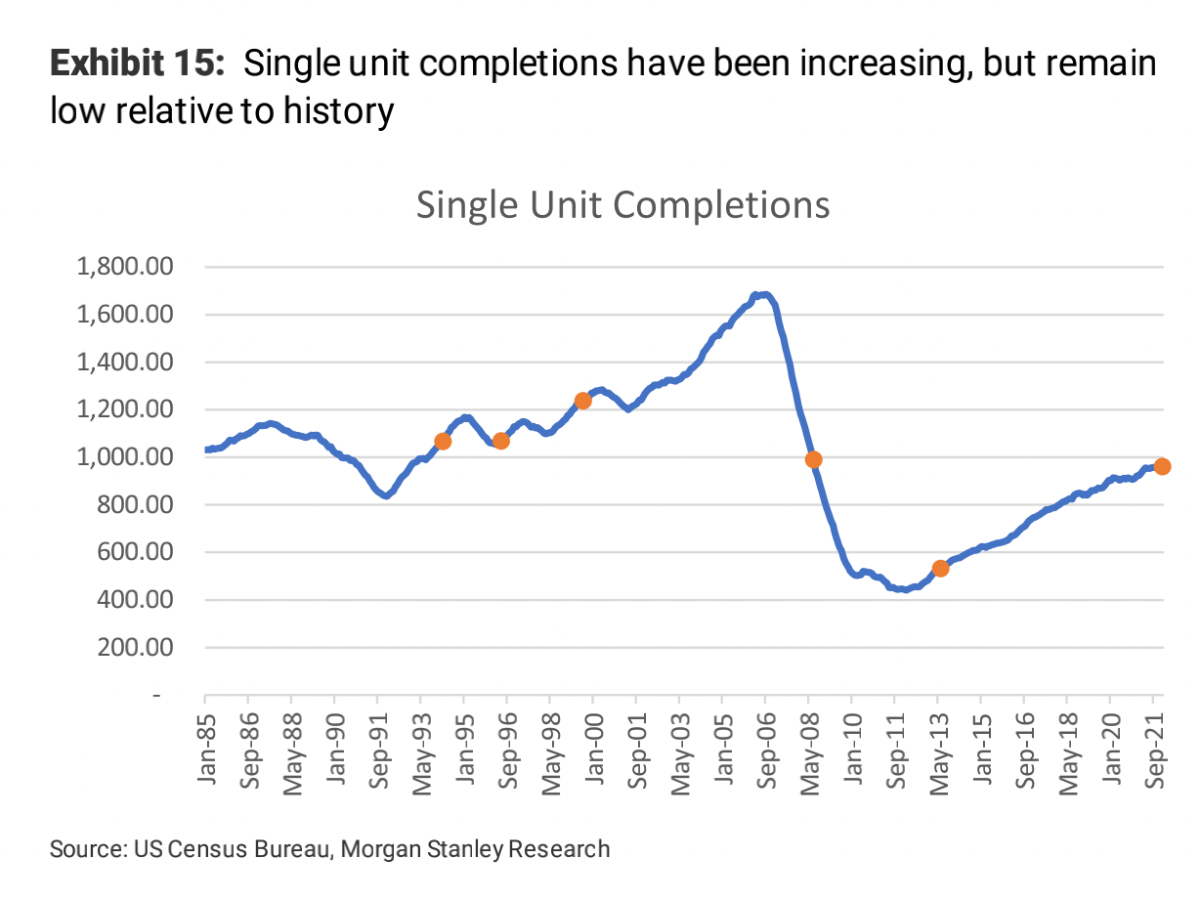 Tight inventory levels are putting pressure on homebuyers, but the remainder of 2022 could see some changes in new inventory. The number of homes under construction has reached its highest level since December 2006, and despite tighter inventory, additional supply will ease upward pressure on house prices as these homes are completed during the year. 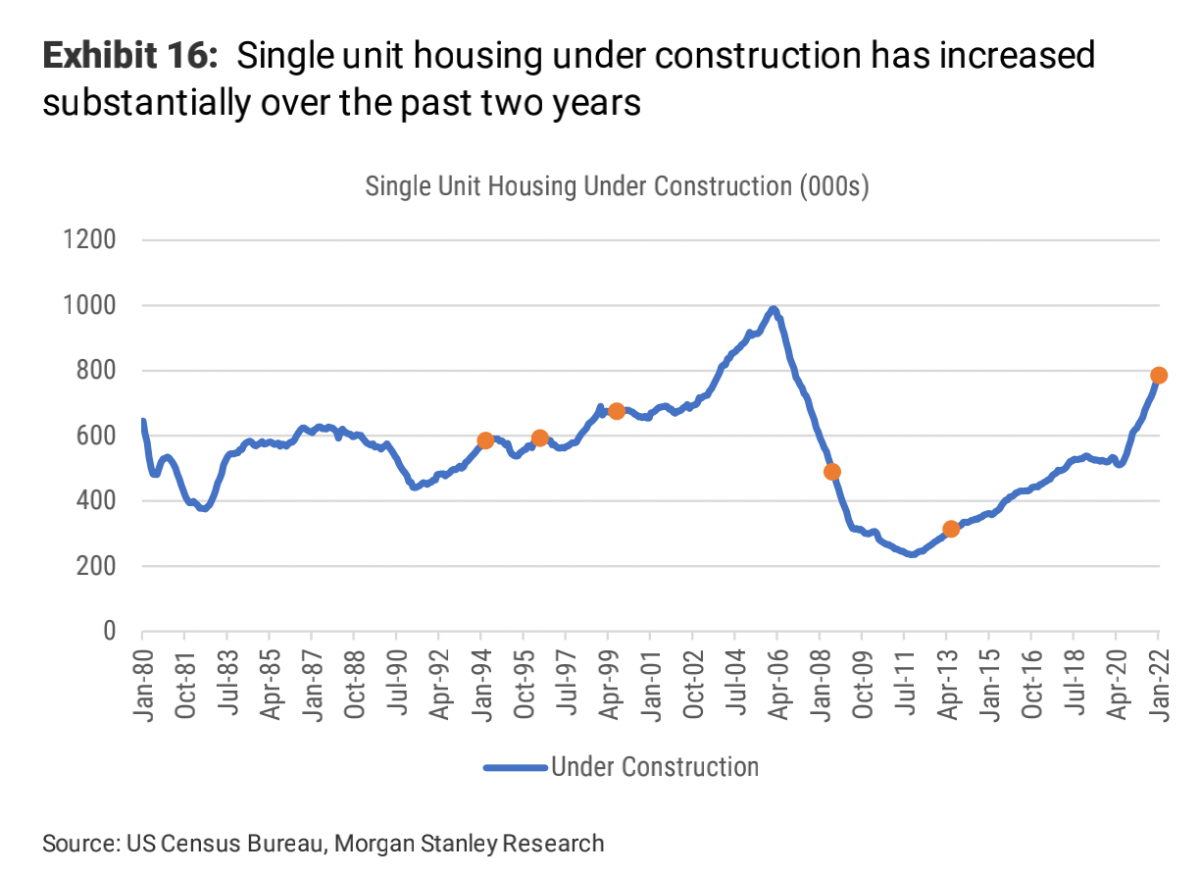 Real estate activity and home sales will start to slow, especially with the prospect of existing home sales being lower or lower, which is already showing in the mortgage application data. In the past eight weeks, the number of applications has dropped by 11% compared to last year.

In terms of housing prices, Morgan Stanley concluded that as the inventory tightness eases, housing prices may slow sharply in the next 12 months, and housing price growth is expected to drop from 19% in 2021 to 5%.

This article is reprinted from: https://news.futunn.com/post/14697874?src=3&report_type=market&report_id=203556&futusource=news_headline_list
This site is for inclusion only, and the copyright belongs to the original author.