Recently, Tencent held a “science meeting” with the theme of aerospace. It makes me curious as an aerospace fan who also holds the “Geek Park Innovation Conference” every year.

I really talked to the person in charge of this project at Tencent, and found that this “Science Conference” has been held for 4 consecutive years. In previous years, according to the scientific fields that children are familiar with and interested in, scientists from different fields were invited to teach children science. This year is different. Tencent cooperated with the Information and Publicity Office of the National Space Administration and the China Soong Ching Ling Foundation to present the theme of a certain field for the first time, focusing on “big aerospace”, inviting “moon exploration”, “Mars exploration” “Plan”, “Black Hole” and other front-line researchers to give speeches.

It can be seen that there have been some changes in Tencent’s ideas for youth science popularization.

We have all participated in many “conventions”, but there are not many called “Xiaohui”. The name of Tencent’s event makes people curious.

After understanding it, I realized that this “small meeting” actually originated from a “general meeting”. Tencent has a scientific WE conference, which has been held for the tenth year since it was held in 2013. Every year, the WE Conference invites scientists from all over the world to share cutting-edge scientific discoveries.

The topics of the WE conference are very hard-core and brain-burning, mainly for adults and even professionals. But at this conference, there are many children sitting in the front row listening to the lecture, and they can insist on listening to the end.

It is said that this discovery made Tencent feel that it is valuable to organize a scientific activity for children just for them. That’s where the Science Sessions come in.

Teenagers love science and technology, and they don’t really need a reason. I remember that there were many children at the Geek Park Innovation Conference over the years. Even when it was held in Shenzhen last year, a boy who came alone without the company of his parents actually won the grand prize in the on-site lottery. I later asked him why he came to such a technology conference. Do you understand? His answer was simple and clear, “I’m just curious, I can only understand a little bit, but I’m very happy.”

You see, for those teenagers, it’s not the most important thing to understand or not, it’s enough to be immersed in the atmosphere of technology and feel energetic and happy.

The same is true for the “Science Small Meeting”. The project leader of the Tencent Youth Science Small Meeting told me that the first “Science Small Meeting” in 2019 will be held in Shenzhen. The whole convention is in the form of a “little theater”, in this small theater, the children will meet Hawking’s daughter, Westworld’s general scientific adviser, the founder of the most famous technology blog Wait but Why, and the director of the Department of Sleep Medicine at Harvard University. The reason why I chose to be in a small theater is to hope that there will be a natural intimacy between people, which will be very different from the magnificent live experience of the We Conference.

One of the most popular sessions that year was the face-to-face session between kids and scientists set up by the organizers. When communicating with Hawking’s daughter, a child asked a question about black holes, which stumped her. She made a phone call to ask a physicist friend in the UK before giving the answer. This atmosphere of honesty and authenticity is the most precious. The core of what children gain may not be knowledge itself, but the encouragement of curiosity and the open but rigorous atmosphere that comes from the world of science. This may be something they do not easily feel in their daily life. 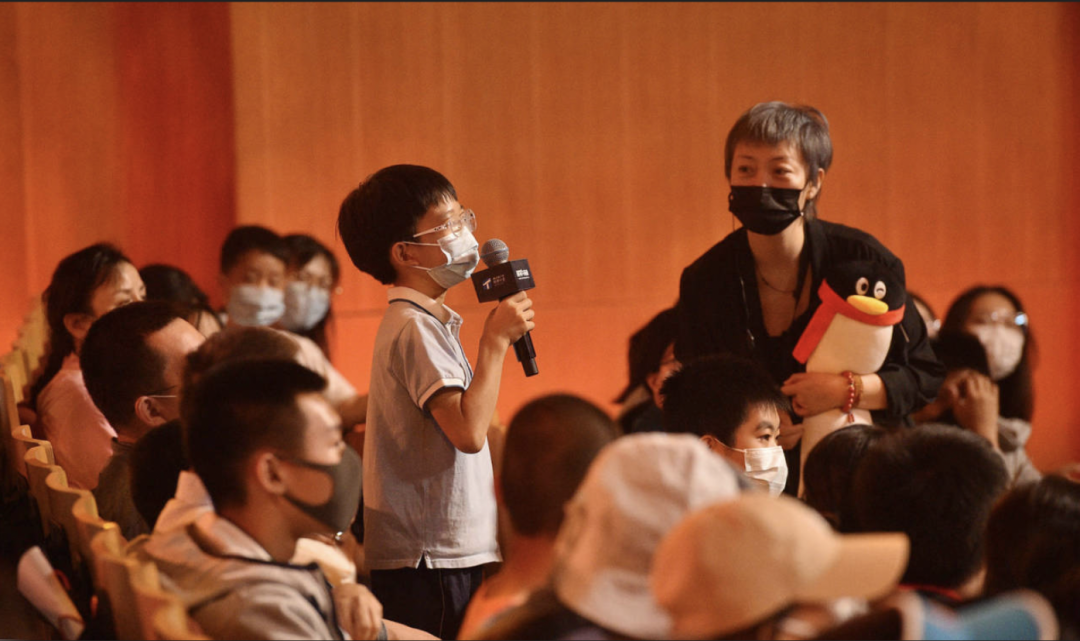 Elementary school students interact with scientists on the spot

I think there is an idea worth learning from: if the “Science Show” is a “science show” customized for children. Then the scientists who appear in this show, their roles are not teachers, but interesting and infectious people living in the scientific world. The connection between people always evokes richer emotions.

In terms of formal planning, Tencent’s planning department will also think of different ideas every year. For example, one year, scientists in different fields will list their favorite songs and make them into “physicist playlist”, “chemist playlist”… …Let children feel the inner world of scientists more directly. In another year, we planned the children’s awards to scientists, and selected the children’s favorite among the teams behind the scientific breakthroughs this year, and let the children go to the stage to present awards to scientists.

The communication with the “Science Small Club” project team left me with the strongest feeling that popular science for teenagers is really different from popular science for adults. It is very worthy of encouragement to “squat down” mentally, do a lot of “small plans”, pay attention to those “little emotions”, and insist on doing so with heart.

A few months ago, SpaceX’s latest documentary, “Back to Space,” came out, and there was one story that struck me. A little girl named Anna was led by her teacher to visit the Johnson Space Center in Houston when she was in fourth grade. Later, she became a worker in the aerospace industry, responsible for the signal transmission when the Dragon spacecraft docked with the space station. The visit in fourth grade was the starting point for her relationship with spaceflight, and from then on, she knew that “I wanted to be a part of spaceflight operations.”

There is a signal and a yearning left in the child’s heart; then in the future, the first note may become a tangible part of their life movement.

When I think back on myself as a “lifetime aerospace fan”, it seems that there was a very magical critical moment that happened in my childhood.

When I was about 10 years old, my father took out a book from his bookcase and gave it to me. It was a Chinese-English bilingual version of “We Got to the Moon” published in Hong Kong, which told the story of the Apollo program. My father, who is proficient in English translation, probably meant for me to learn more English. But I was immediately intrigued by the actual record of the Apollo program and the series of rocket and lunar module drawings in the book.

I have read this book no less than 10 times later. I read it before going to bed, and also when I was in bed. I finally succeeded in shaping my myopia, but it also allowed me to replace almost all my pocket money with commercially available ones. Aerospace books, and then extended to astronomy, aviation, physics… The world of science has slowly unfolded a grand picture in front of me since then.

I even think that today, as a pure liberal arts student, I can make so many science students friends in Geek Park, more or less related to the starting point of this book. Because it gave me a resonance point of admiration for their ability to create technological products, and a raw curiosity to explore their wisdom and ideas.

I remember that in 2014, I invited Elon Musk to the Geek Park conference to share. In the exchange after the meeting, we talked about childhood stories and found that he joined the rocket business because of such a critical moment in childhood. The curiosity that a book or a movie inspires is a lifetime imprint on a child.

With the rapid development of commercial spaceflight in recent years, space will be a new frontier for human beings in the future. So, how can the younger generation stimulate their native curiosity, and how can the next generation in China make a difference and contribute to the great process of mankind?

In the past, “spaceflight” often appeared in a grand narrative in various news. The dedication of aerospace workers and the manifestation of the national spirit are of course important and need to be carried forward. But for children, the starting point of curiosity cannot be ignored either.

The overall planning of Tencent’s “Science Conference” obviously has a similar idea. For example, Jia Yang, the first speaker this year, also came to the “Geek Park Innovation Conference”. He is the deputy chief designer of the lunar and Mars rover. I have had in-depth communication with him. He is very good at interpreting complex issues in a simple and interesting way. He is an expert who makes people feel very comfortable and enjoyable in daily chat.

In his speech this time, the Tencent team unearthed another side of him. At the beginning of his speech, he said that the key word he hoped the children would remember was “romance.” Jia Yang started with an ancient poem written by himself and introduced his beloved Mars probe, from the choice of the word “fire” in the logo, the design of the forum, to how to take pictures on Mars. Through his narration, let the children follow the perspective of the Mars rover and extend their eyes to the universe. In the end, he showed a self-made image of the rover facing the distant starry sky. The Mars rover is a partner of mankind. He said, “The universe is very big, let’s see it together”, hoping that it will bring us more scenery.

The project leader of the Tencent Youth Science Association said that from “pre-collection communication” to speech planning, what they do is “feel what scientists want to express, and then help them switch languages.” Scientists only study one field in their lives and are good at explaining this field. Where is the difficulty, but before explaining it, it’s just as important to answer why the audience is listening to it. One of the key points of doing science popularization is to find the connection point between science and ordinary people. To put it bluntly, it is to stimulate curiosity, not simply publicize it .

I think this sentence is the most powerful language to impress many children. These things will inject powerful energy into their life when their worldview and values ​​are formed.

After doing science popularization for so many years in a row, the scientific community project team has gradually accumulated experience and feelings about popularization. The project leader of the science meeting recalled that when the first science meeting was held in 2018, both individuals who could give speeches and self-media for popular science were very rare. There are very few popular science accounts as influential as the Institute of Physics of the Chinese Academy of Sciences. In order to learn how to do a good job in popular science, he took the team to consult the teachers of the Institute of Physics.

In recent years, the content of popular science on various media platforms has been gradually enriched. As a technology company, Tencent’s ability to understand the scientific field is a natural advantage of Tencent. At the same time, the company has been communicating with the outside world through its products, so it can better understand users, what children like, and how they like to express themselves. “We are actually doing translators and amplifiers to help people express themselves.” This is also Tencent’s clear thinking on how to play its advantages and how to position itself in science popularization.

I hope Tencent can make science popularization projects like “Science Small Meeting” better and richer, because this is a meaningful thing. But I would also like to make a suggestion. Big-name scientists are very busy. Many young scientists and even entrepreneurs who are good at expressing the beauty of science and technology are worth their effort.

This article is reproduced from: https://www.geekpark.net/news/308762
This site is for inclusion only, and the copyright belongs to the original author.