This is a backup to an answer to a Quora question “Why does anyone whitewash Pol Pot?”. In fact, I personally have a very complicated psychology about the catastrophes caused by these leftists in history. On the one hand, these catastrophes are indeed catastrophes, not only because they killed a lot of people, many innocent people, but also because these catastrophes are still happening today. Still functioning as an ideology, the dead haunt the present and the present. But I don’t want to be like many rightists who simply blame these catastrophes on the fact that a few leaders have gone mad, or that the entire left-wing movement has problems and can only mass-produce mass murderers. This makes how to deal with the havoc wrongly unleashed by these historical left leaders a question that needs to be taken seriously. What I wrote in this article is nothing more than that the CPK first faced a harsh environment, and made a catastrophic response to the disaster, and behind this is a wrong revolutionary theory at work. 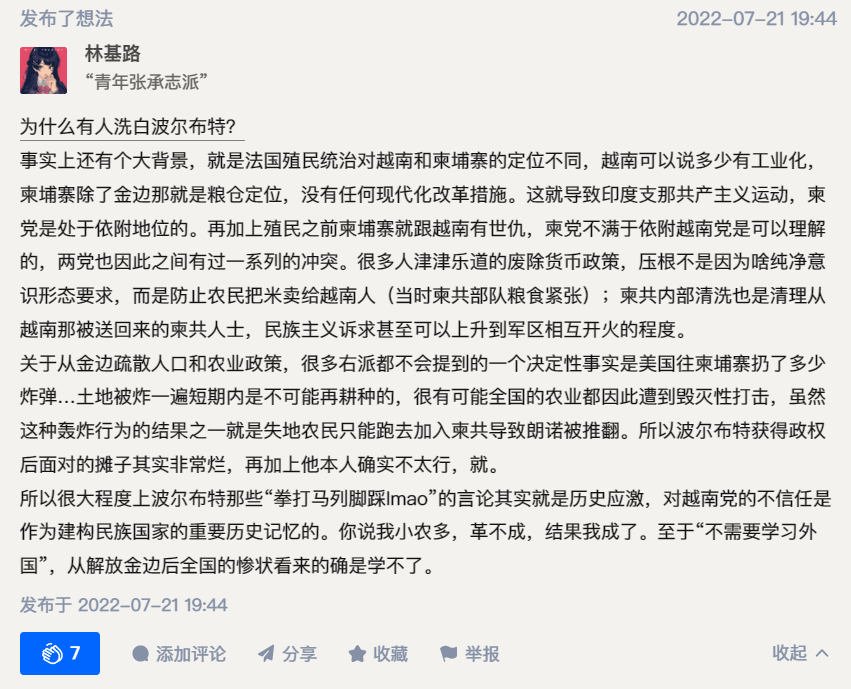 By the way, a supplement from a big guy is attached first in front of the text.

This is the reference when I wrote this Zhihu answer: The condescending savior: the mistakes of the Pol Pot regime

Pol Pot is indeed a scumbag, but he is probably not scornful in the way most people imagine.

Pol Pot in the imagination of ordinary people: the knight of the apocalypse, the eternal scar of the left, the ultra-left terrorist trying to destroy the city, currency and commodities, the good student of Mao Zedong, the successor of the Cultural Revolution

But consider these labels carefully, and each one is quite outrageous. For example, a good student of Mao Zedong, this is what Mao Zedong said himself, but Mao Zedong, like all other Chinese people, has the traditional virtue of drinking and bragging. Some words are funny and cannot be studied carefully. Bout is his good student. In fact, Pol Pot himself bragged several times that today I am even above Lenin and Mao Zedong, and what is the prospect of Cambodia’s revolution today so unique that it is best not to learn anything from abroad, in this Under the premise, you can hardly say that he is a good student of Mao Zedong…

By the way, Pol Pot himself was very disdainful of China’s Cultural Revolution, and he was not pleasing to the eye when he saw F4. On the contrary, the Hobbit came to power later, but he was fascinated, which also showed that he was neither a good student nor a successor. After the political situation went from bad to worse, the CPK tried its best to make Cambodia a normal revisionist country. After all, Pol Pot’s pro-China was just to oppose Vietnam, while Vietnam was pro-Soviet. The logic here is the same as Soviet-Yugoslav-Albania. In other words, what kind of relationship does Pol Pot’s pro-China and that China have without dick hair. Use Pol Pot to cleave Mao Zedong’s province.

Not to mention Pol Pot’s communist pompous attempt to wipe out cities, money, and commodities. These policies are war policies first, and then the onset of unrealistic “extreme left paranoia.” The first thing to eliminate the city is to move the population out of Phnom Penh. When the CPK seized Phnom Penh, it was a behemoth that concentrated a large number of people and could not feed itself and could only live on American relief food (the reason why the population was so large was because the United States continued to The bombing made the countryside unable to feed itself), evacuation of the urban population was almost an inevitable choice at this time. But after that, the CPK immediately promoted it as a long-term policy in all cities of the country. The reason for this is the complete failure of the CPK in the cities. Just as the CPSU originated in the cities and could not get support in the countryside, the CPK was just the opposite. It originated in the countryside and could not get support in the cities. The only urban factories it could control were even the only ones. One of the capitals, so he resorted to this most severe and brutal dictatorship method. But the problem of the CPK here is not too left, but not enough: why don’t you hold more grievance conferences to win the sympathy of the urban workers, why don’t you follow the mass line of the urban workers?

By the way, Pol Pot’s big peasant route also allows him to think that Cambodia’s revolution route is the most special, so he can’t learn any experience from the world, and he doesn’t need to be a good student of Mao Zedong. This wave, this wave is called Echoed around.

Then there is the abolition of money and commodities by Pol Pot. First, of course, still as a war policy, at first the abolition of currency and commodities was to prevent the outflow of rice in the free circulation of the market, especially to Vietnam, but then it was also implemented as a long-term policy that was a model of communist exaggeration. But in fact, as long as this policy is analyzed, it will be found that it is neither possible nor necessary, and it is even personally violated by the CPK taking the lead. The last person who wanted to do this was Liu Shaoqi, who was caught and severely criticized by Mao Zedong. It shows how good the CPK’s policy is. Their misunderstanding of socialism is as deep as Lao Bao who deliberately made trouble during the Cultural Revolution. . As for why I said that this policy was finally violated by the CPK, it was because the CPK wanted to allow farmers to produce more surplus rice more quickly, efficiently, and economically to generate international income, and the whole country completely followed the baton of the international market. Just as Cuba pawned its state to the international sugar trade, the Red Cambodian also pawned its state to the international rice trade. Socialism has been turned into a set of capitalism that does not pay wages (of course I know that many rightists understand socialism like this, it can only be said that it is very suitable for joining the Red Cambodian). Therefore, my criticism of the CPK is still not too left, but not enough.

Finally, there is the accusation about the Knights of Apocalypse, which is nothing to say. After all, in the right-wing view, the more loyal the emperor is, the more humane it is. Hey, the sacred violence caused by the uprising is too bloody. The mythical violence of naked life, brothers. Even the rebuttal here is a reversal of the accusations of the right. You call the left a knight of the apocalypse, and his hobby is to eat and exercise. I will directly praise you for being too right, and I will like this one, and also point out Pol Pot Mao Zedong is the real Knight of Apocalypse, just like Zhang Xianzhong’s quality is too bad, and Li Zicheng is the real Knight of Apocalypse. Of course, sometimes it’s too lazy to argue, and it’s just “if you’re right, you’ll be the next one”.

Finally, I would like to talk about my own accusation against Pol Pot. For example, the CPK is completely invisible in front of the Cambodian people. This can certainly save itself from being heavily attacked by hostile forces, but is it too much to be invisible even in line and ideology? Tricky, and then the next problem is that Pol Pot used a lot of administrative coercive orders and dictatorship methods to replace the mass line. The nonsense was invisible. Where did the mass line come from. Cambodians didn’t know that the organization turned out to be a red one until 1977. party. In the end, the policy of terror became a vicious circle, further and further away from Pol Pot’s initial vision. Another example is Pol Pot, just as the Germans hired Jews to package and deal with domestic conflicts, and they also asked Vietnamese (actually Vietnam) to package and deal with domestic problems. This is already a prototype of fascism. And so my accusation against Pol Pot is because his tragic misunderstanding of socialist theory and his disastrous policies harmed the international left movement – not the “Hey, left = murderer =” as the right imagined. no”.

The object of the quote here is still Jesus, “Whoever is without sin among you, he can first pick up a stone and hit her”, whoever has deep hope and disappointment for the historical left-wing movement can blame the wave Erbut. In other words, forget about the right.

Even if I say more black farts, the outrageous policies of Pol Pot’s communist exaggeration have been unexpectedly realized today. For example, Pol Pot wants to cancel the currency, today Cambodians use US dollars, and for example Speaking of eliminating cities, today’s Cambodian urbanization is struggling. Hey, international capitalism is the real heir to Pol Pot.

This article is reprinted from: https://yuukoamamiya.github.io/p/pol-pot/
This site is for inclusion only, and the copyright belongs to the original author.