Event: The US CPI in May was 8.6% year-on-year, compared with the expected and previous value of 8.3%.

Core conclusion: The U.S. CPI in May hit a new high in nearly 40 years, and the market was basically “collectively misjudged”, mainly because the escalation of the conflict between Russia and Ukraine pushed up energy prices. Affected by this, U.S. stocks fell sharply, U.S. bond yields rose, and the Fed’s interest rate hike expectations rose sharply. Follow-up US inflation expectations have risen again and are expected to remain high in the third quarter. In the short term: the Fed’s interest rate meeting on June 15 is likely to increase by 50bp, focusing on the updated rate hike path, especially the possibility of adding 75bp in July and September; Be alert to the adjustment pressure of short-term US bonds and US stocks, the conflict between Russia and Ukraine is still a major disturbance.

1. The U.S. CPI in May hit a new high year-on-year, mainly due to the sharp rise in energy prices caused by the escalation of the conflict between Russia and Ukraine; the core CPI continued to fall year-on-year, but was still as high as 6%.

3. Looking back, inflation expectations have risen again. It is expected that US inflation will remain high in the third quarter and will fall in the fourth quarter, but the overall decline may be limited.

4. In the short term, pay attention to three points:

> On June 15th, the Fed’s interest rate meeting will be held, and there is a high probability of raising interest rates by 50bp, focusing on the updated path of interest rate hikes, especially the possibility of adding 75bp in July and September;

> In the short term, the adjustment pressure of U.S. bonds and U.S. stocks will increase, and historical experience shows that A-shares will also be under pressure.

The text is as follows:

1. The U.S. CPI in May exceeded expectations and reached a new high, mainly due to the escalation of the conflict between Russia and Ukraine, which pushed up energy prices. 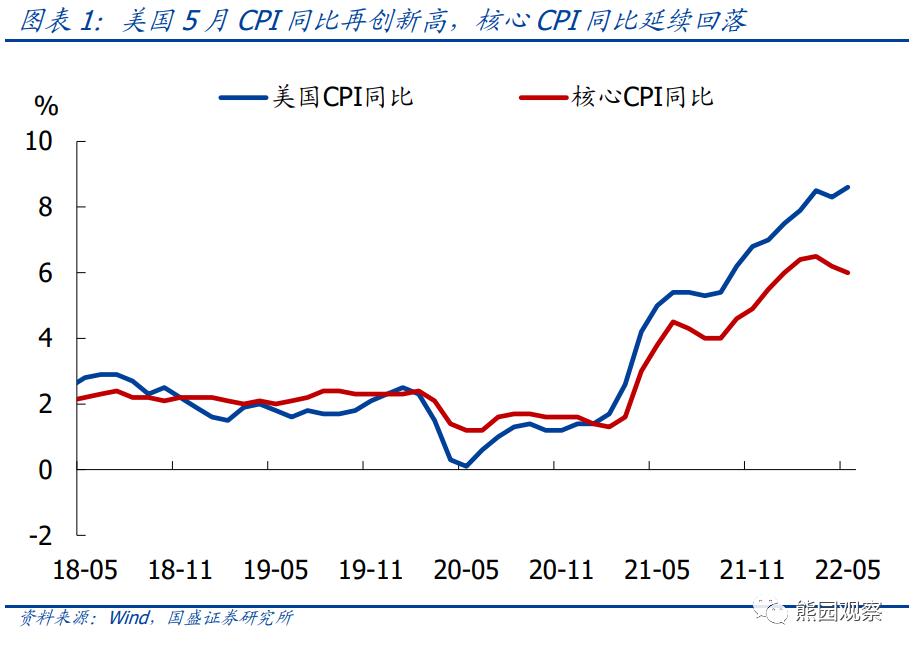 > Sub-item performance: Among the main sub-items of the US CPI, food and energy prices in May were 10.1% and 34.4% year-on-year respectively, both of which were significantly higher than the previous month, mainly due to the escalation of the conflict between Russia and Ukraine. The Lent crude oil, NYMEX natural gas, and CRB food indices rose by 20.3%, 32.0%, and 2.5%, respectively, all exceeding expectations, which also led to a collective misjudgment of the CPI this month.

In terms of other items, the price of commodities excluding energy and food was 8.5% year-on-year, which has fallen for 3 consecutive months, and it is also the first time since April last year that it was lower than the overall CPI year-on-year. Items rose by 5.2% year-on-year, with a slight increase in the transportation sub-item, while the growth rate of the residential sub-item accelerated. 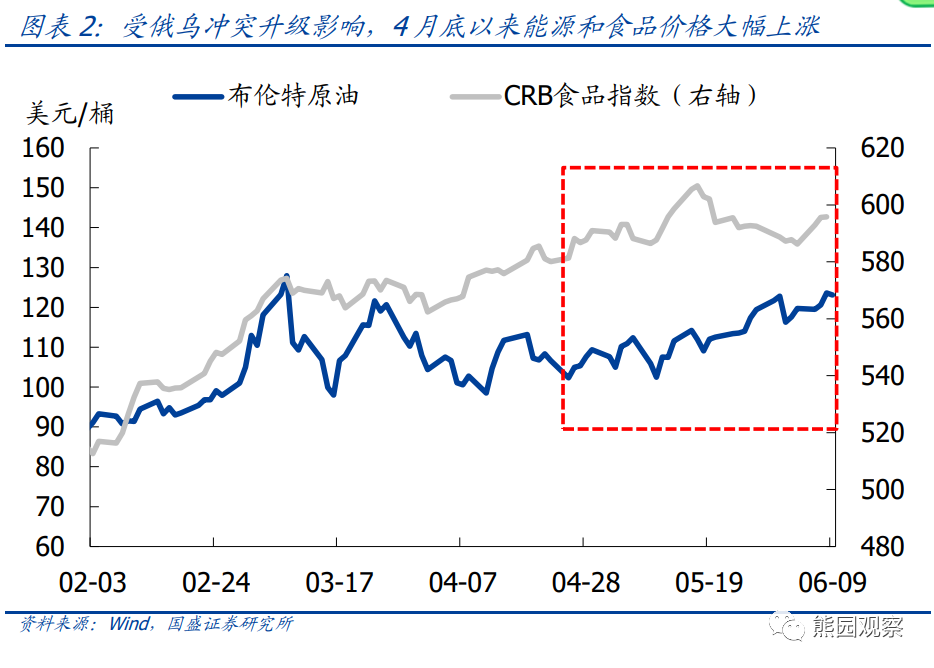 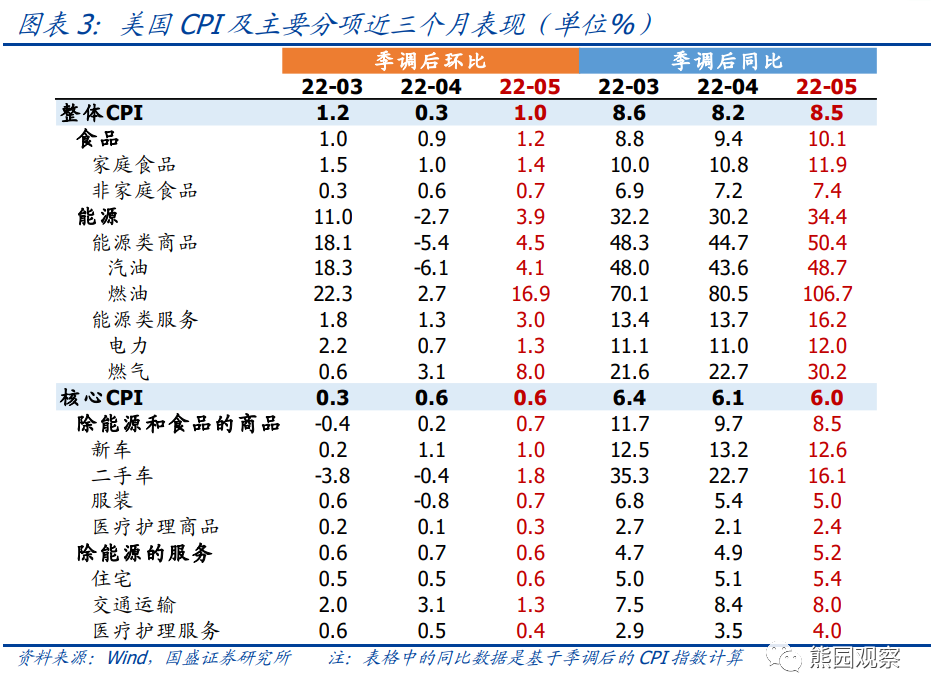 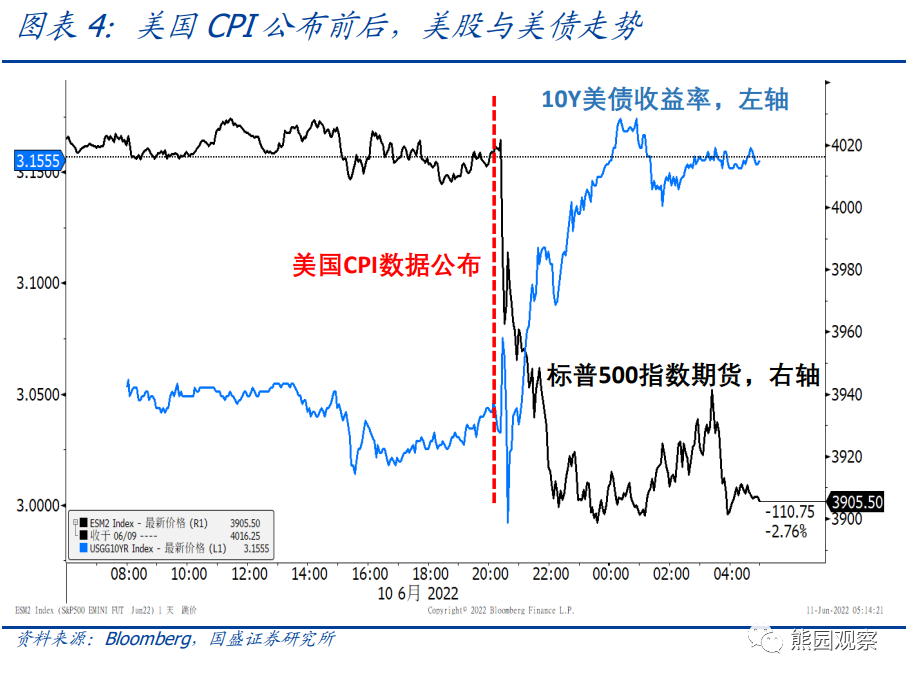 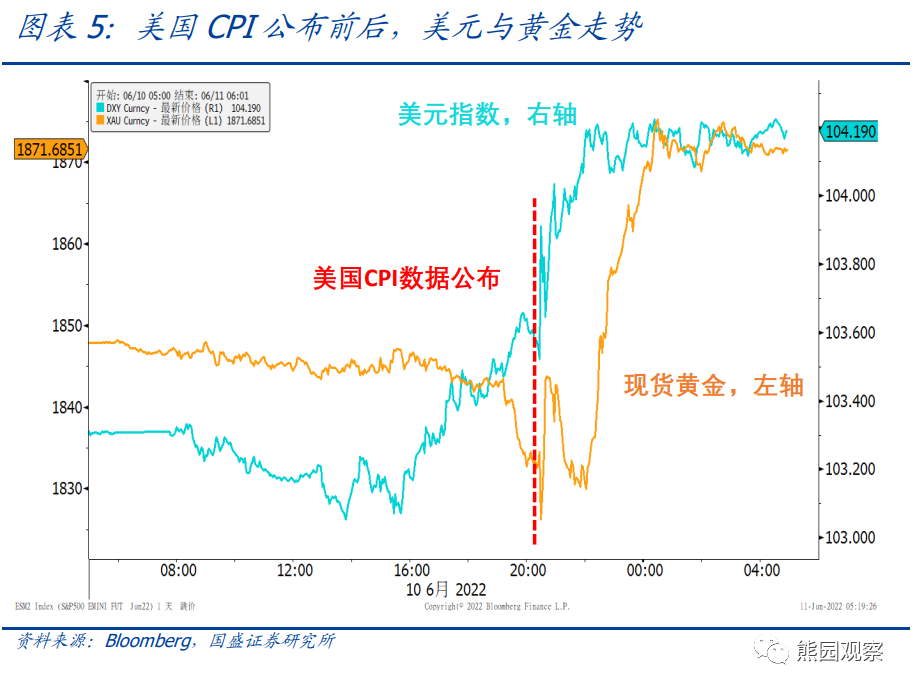 > Changes in interest rate hike expectations: Before the release of the CPI data, interest rate futures implied an increase of 50bp each in June and July, and there is a probability of more than half of them increasing by 50bp in September.

3. Looking ahead, U.S. inflation will remain high in the third quarter, pointing to a further increase in the risk of global stagflation; in the short term, we will be closely watching the path of interest rate hikes after the Fed’s meeting on 6.15, and we also need to be alert to the risks of U.S. bonds and U.S. stocks.

>U.S. inflation outlook: We have pointed out many times in previous reports that U.S. inflation basically follows the principle of “the direction of energy is determined by the sub-item, and the range of other sub-items is determined.”

Under the neutral scenario, energy prices will remain high in the short term due to the impact of the Russian-Ukrainian conflict, but in the medium and long term, as the global economy slows and the impact of the Russian-Ukrainian conflict subsides, energy prices will tend to decline; at the same time, as consumer demand slows, Factors such as the repair of the global supply chain, the core inflation pressure will gradually ease. 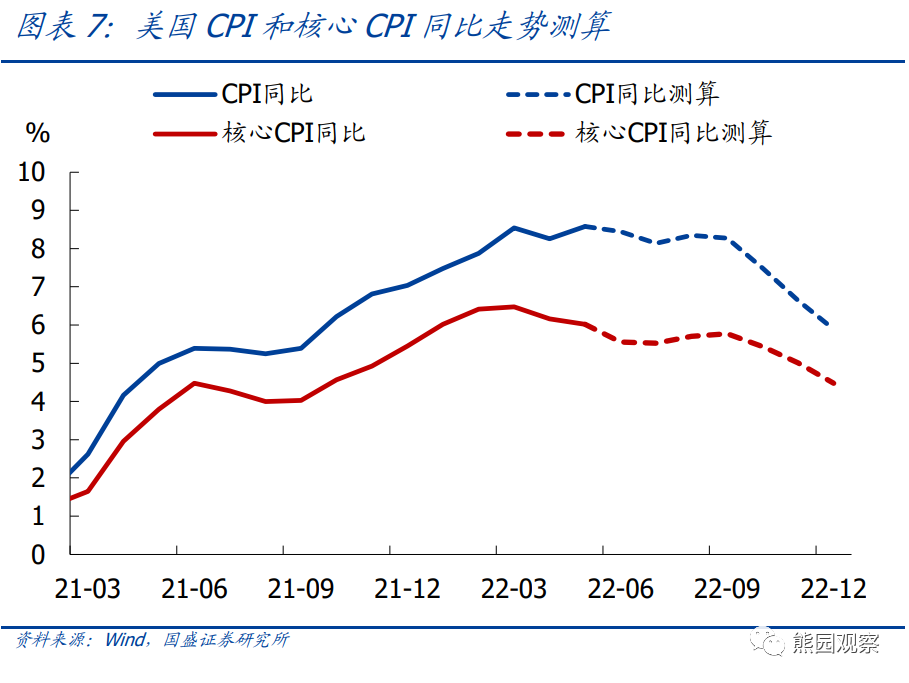 > Prospects for major asset classes: After the release of the CPI data this time, market inflation expectations are on the rise again, and the Fed is expected to raise interest rates. The US bond yields will remain high in the short term, and it is not ruled out that they will rise above the previous highs, which also means that US stocks There is still pressure to adjust in the short term, while gold may experience a phased market.

According to historical experience, when US bond yields rise and US stocks fall, the pressure on A-shares to adjust will also increase significantly.

This article is reprinted from: https://news.futunn.com/post/16344688?src=3&report_type=market&report_id=207899&futusource=news_headline_list
This site is for inclusion only, and the copyright belongs to the original author.