From automotive lubricants to lithium battery tracks, Longpan Technology (603906.SH) “holds” the “thighs” of Ningde Times (300750.SZ), intending to show off its strengths. But who is the dark horse on the inner lithium iron phosphate track?

Since Longpan Technology announced on May 30, 2022 that it has completed a fixed increase of 2.2 billion yuan, the stock price has begun to rise. Based on the closing price, as of June 15, the company’s share price rose from 29.95 yuan per share to 36.78 yuan per share, and the share price rose by more than 20% in 11 trading days. The 15 fixed increase subscription institutions recorded a floating profit of 38%.

Since the introduction of the lithium battery concept, the market value of Longpan Technology has soared, from 2.9 billion yuan at the end of May 2020 to 17.7 billion yuan today, an increase of about 510%. Just on the track where the investment in lithium iron phosphate is rolling in all the way, can this rally continue? And has Longpan Technology retained enough stamina? 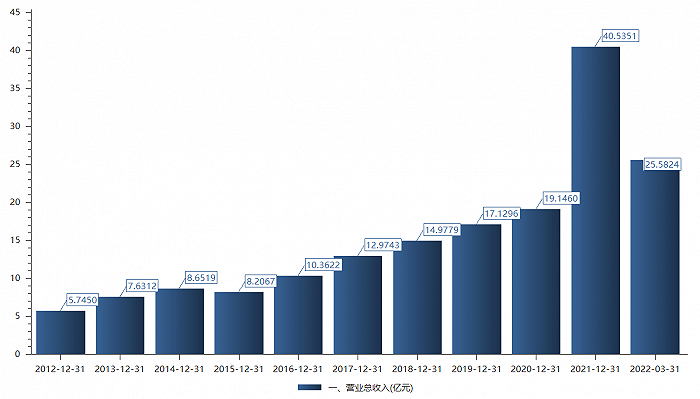 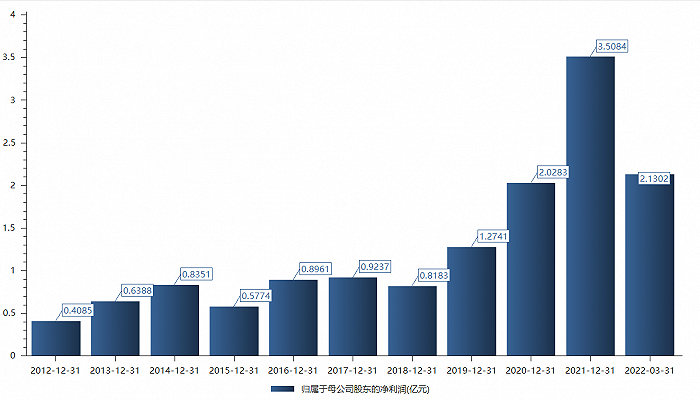 Longpan Technology’s net profit has been returned to its mother over the years. Image source: choice terminal

In 2020 the company begins to look for a second growth curve.

At the end of that year, Biteray, a leader in anode materials, signed a contract with Longpan Technology to sell its lithium iron phosphate-related assets and business to the latter. In 2021, the company will use Changzhou Liyuan New Energy Technology Co., Ltd. (hereinafter referred to as Changzhou Liyuan) as a springboard to start transformation and undertake new energy business.

The aspiration investment is 100% invested and controlled by CATL. In summary, CATL holds 12.72% of Changzhou Liyuan shares. 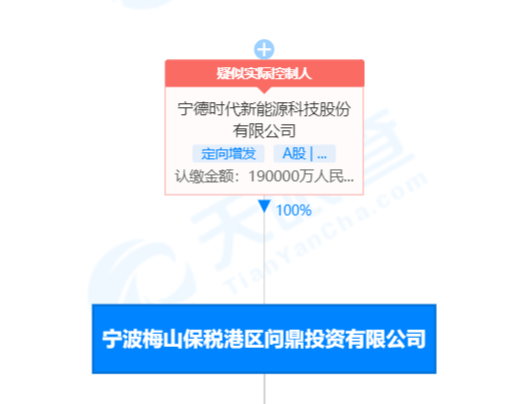 In June 2021 , Changzhou Liyuan Company was consolidated into a listed company, which doubled the revenue of Longpan Technology. In 2021 , the company’s total operating income is 4.054 billion yuan, and the net profit attributable to the parent is 351 million yuan, a year-on-year increase of more than 110 % and 70% respectively . 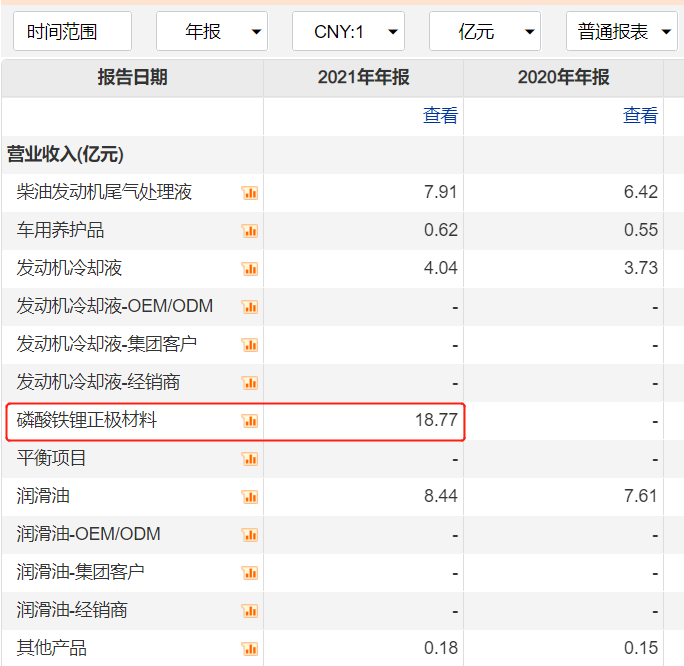 The market value has soared and the revenue has soared. Longpan Technology is fully betting on the lithium iron phosphate track.

On June 13 this year, the company decided to change the original investment project “Environmental Environmental Fine Chemicals Project for Vehicles” in Zhangjiagang to “Ternary Cathode Material Precursors and Other Projects “ , and increase the investment scale to 1.5 billion yuan.

In fact, from the second half of 2021 to the present , the company has accelerated its transformation to the lithium battery track with Changzhou Liyuan as the core , or established or acquired Liyuan subsidiaries, and has successively announced multiple capacity expansion plans.

According to Jiemian News statistics, its planned and signed projects involve a total investment of nearly 7 billion yuan. Although many of these projects are joint construction capacity and are constructed in first and second phases, the scale of capital cannot be underestimated.

For example, this year: 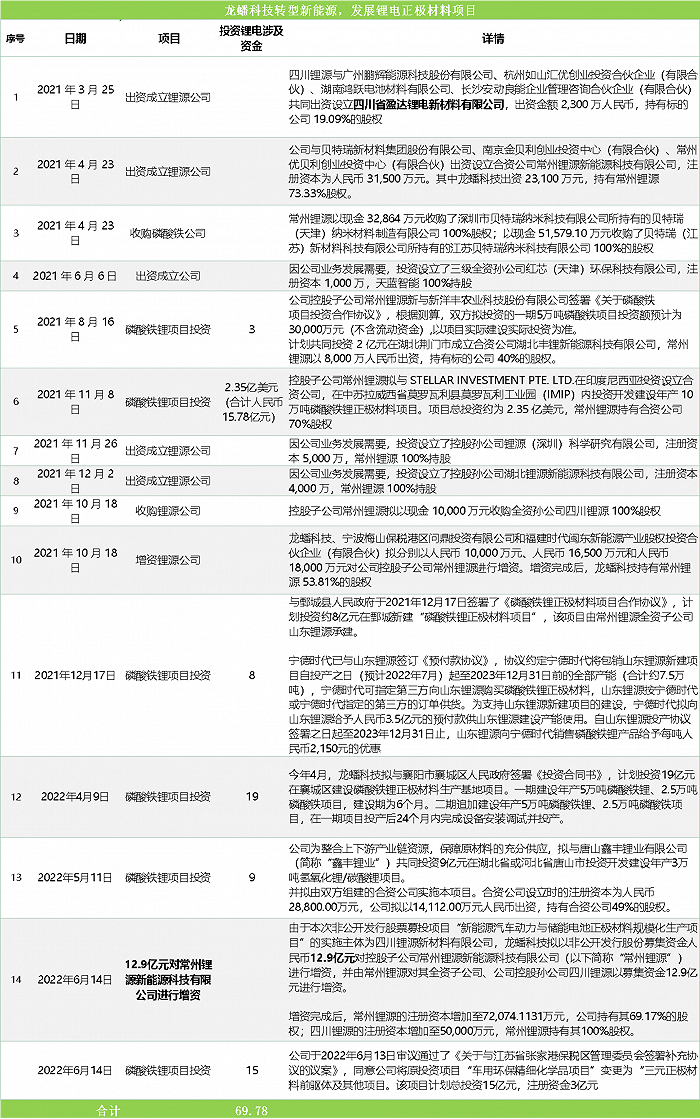 Establishing a number of lithium source subsidiaries and expanding production capacity, where does the money come from?

On August 28, 2021, the company announced that it plans to raise about 2.2 billion yuan, and the fundraising will be completed on May 30 this year.

The project of “ waiting to be fed” consumes most of the funds just raised. On June 14, the company stated that the 1.29 billion yuan of the raised funds will increase the capital of Changzhou Liyuan, and Changzhou Liyuan will increase the capital of its wholly-owned subsidiary and the company’s holding subsidiary, Sichuan Liyuan, with the raised funds of 1.29 billion yuan. .

The concept of lithium battery also makes the company’s fixed increase project sought after by institutions.

This targeted financing issue of shares adopts the method of inquiry, and the issue price is not lower than 80% of the company’s average stock trading price in the 20 trading days before May 10, 2022, that is, 24.13 yuan per share. After inquiries to 24 investment institutions and natural persons, the final issue price was set at 26.51 yuan per share, and the ratio of this price to the issue reserve price was 109.86%.

The target of the private placement was finally determined to be 15. According to the closing price of 36.78 yuan per share on June 15 , the 15 investment institutions have made a floating profit of 38%.

From an industry perspective, this track is becoming more and more inward, and the production capacity of lithium iron phosphate batteries may be excessive.

The research of Battery China pointed out that in 2021, the installed capacity of Ningde era and BYD lithium iron phosphate power battery will be 42.9GWh and 25.2GWh respectively. majority share. Among them, the largest customers such as Hunan Yuneng, Defang Nano, Changzhou Liyuan, Jiangxi Shenghua, and Rongtong Hi-Tech are all CATL. In particular, 69.66% of Defang Nano’s lithium iron phosphate materials were sold to CATL last year.

As the company with the largest downstream throughput of lithium iron phosphate , CATL, BYD and other companies are also extending upstream. Through equity participation, long-term association, investment, joint venture and other forms, they are in-depth with Hunan Yuneng, Defang Nano, Jiangxi Sublimation , Changzhou Liyuan and other companies are “bound”.

In addition, many companies in the titanium dioxide track and the phosphorus chemical track are also taking advantage of cost advantages to compete in this field.

Felicity Seiko (300432.SZ), which is in the automobile manufacturing track, has increased its lithium iron phosphate business by acquiring Sublimation Technology.

The in-rolling track also made it only took half a year for Huayou Cobalt (603799.SH ) , with a market value of 100 billion, to go from entering lithium iron phosphate to pressing the stop button .

On the evening of June 14, Huayou Cobalt announced that after full and friendly negotiation with Huayou Holdings, the company decided to terminate the acquisition of 100% equity of Sheng Vanadium Technology through its holding subsidiary Bamo Technology. The company explained that in order to further concentrate advantageous resources, improve the efficiency of capital use, focus on the new energy lithium battery ternary material industry chain, accelerate the layout of upstream nickel, cobalt, and lithium resources, and downstream product development and capacity expansion, the company decided to terminate the use of lithium iron phosphate materials. field layout.

Today, many forces on the lithium iron phosphate track are staking their ground , and the market reshuffle will accelerate. Who will become the dark horse? Brokerage analysts pointed out that in the future, companies with product and cost differentiation may stand out.

This article is reprinted from: https://readhub.cn/topic/8gTiYXGa9Hc
This site is for inclusion only, and the copyright belongs to the original author.