“In what form do bank provisions exist? Where is it? (1) Starting from the provision of Shuanghui Development”

In the previous article, we analyzed the financial data of Shuanghui Development, and finally came to the conclusion that the provision of Shuanghui Development is the result of the accumulation of asset impairment losses (operating expenses) over the years from the perspective of the profit and loss statement (income statement). A bookkeeping technique that is a virtual concept.

From the perspective of the balance sheet, the provision exists in the form of assets, and the main source of asset impairment is the loss of inventory depreciation. Obviously, this part of assets refers not to currency cash, but to inventory, so the provision of Shuanghui corresponds to The asset is the inventory, and the real body of the inventory may be the ham sausage or cold fresh meat on the shelf, or the pig in the cold storage. Only when these assets that are expected to expire and cannot be sold are “accidentally” sold and turned into cash, the provision can be turned into a cash-covering profit. If they are eventually expired and destroyed, the provision will be written off (another way of accounting).

So, what are the similarities and differences between banks’ provisions and non-financial companies such as Shuanghui? This article will come to a detailed analysis of the bank’s provisions.

Similar to Shuanghui Development, the credit impairment loss here is also realized through bookkeeping, so we can’t see what form the provision is in (for example, banknote cash, deposits, loans, bonds, etc.) .

Therefore, the subsequent content of this article will analyze the loan provision (loan loss provision) in detail.

As mentioned earlier, the accumulation of credit impairment losses will form provisions year by year. As shown in Figure 3, China Merchants Bank’s loan provision balance at the end of 2020 was 234.664 billion, and the provision balance at the end of 2021 increased to 246.104 billion, of which 2021 The annual accrued loan loss is 37.02 billion (the second row of the table in Figure 3, the first row of the table in Figure 2). Usually, I will regard the items other than the provision in Figure 3 as a whole, that is, net write-offs, and the net write-off of loans of China Merchants Bank in 2021 is 25.58 billion. As for why I look at it this way, it is just a personal habit, in order to simplify the horizontal and vertical between banks. Compared. 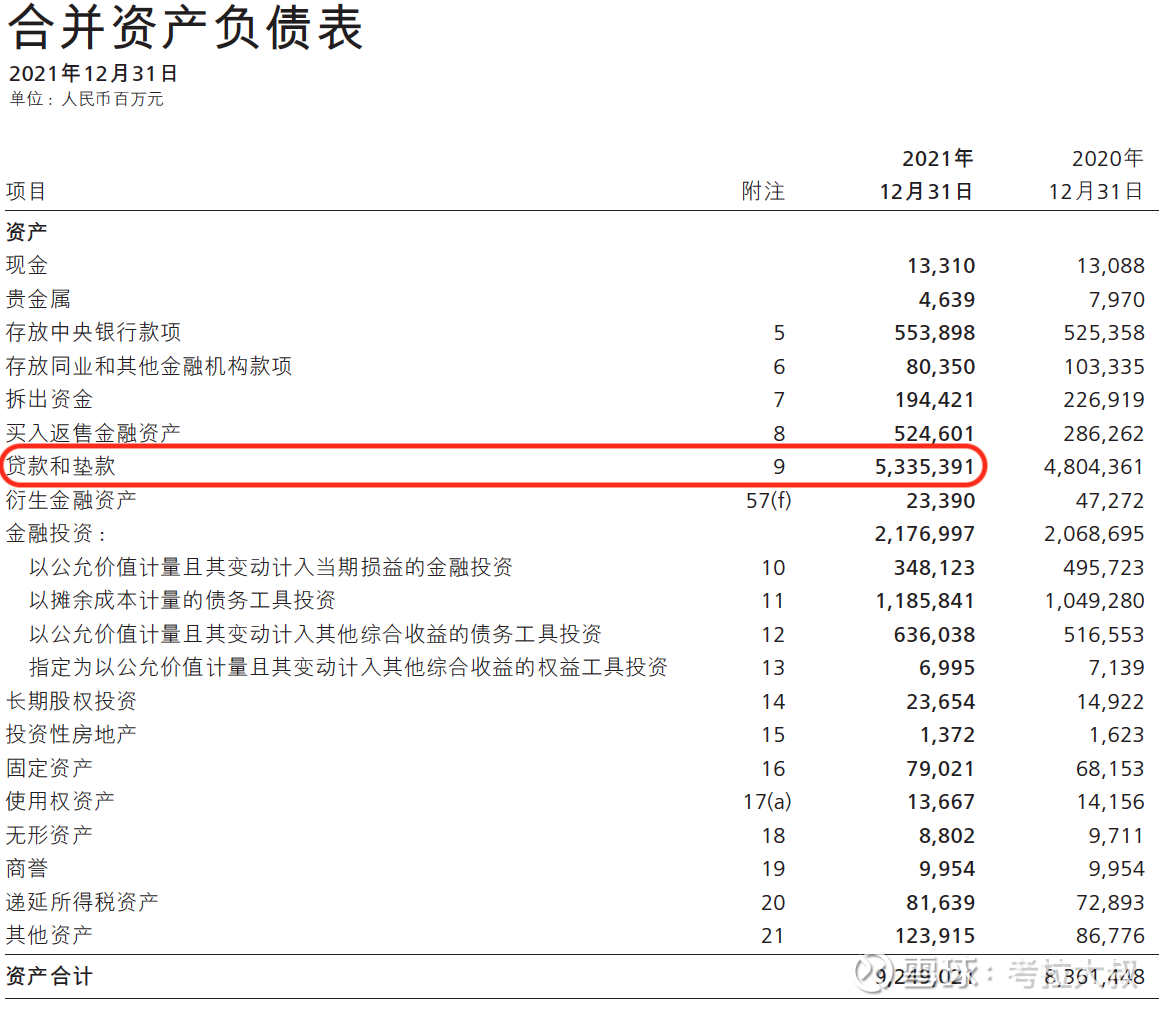 As shown in Figure 4, in the 2021 annual report of China Merchants Bank, the cash balance is 13.31 billion, and the amount deposited in the central bank is 553.898 billion. These two items have given clear values, which can reflect from the side that the provision is neither cash nor money deposited in the central bank. Otherwise, it means that the bank has a small vault, and it has not disclosed in detail how to use it, or even If there is no supervision, it means that it may be misappropriated, which means a huge risk. At least in the more than ten years that I have invested in banking stocks, I have never seen or even heard of the relevant regulations on the management of provision funds, so I can basically confirm that provisions are neither cash nor deposits.

In Figure 4, the loan scale disclosed by China Merchants Bank’s 2021 balance sheet is 5,335.391 billion. There is no detailed explanation here, but in fact, the data here is the net loan amount, excluding loan impairment provisions. This point is disclosed in detail in “3.3 Balance Sheet Analysis” in Management Discussion and Analysis. 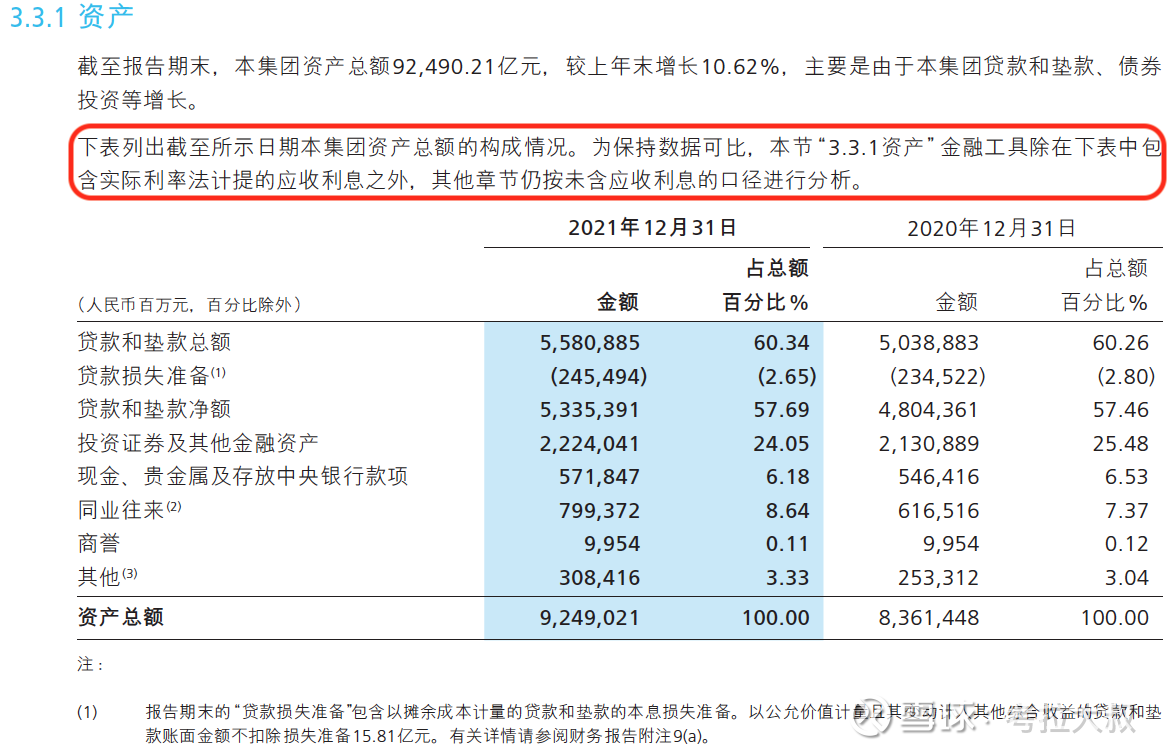 As shown in Figure 5, China Merchants Bank uses the net loan amount (that is, the total loan minus the loan loss provision) instead of the total loan amount when calculating the total assets. The reason for this is that the total loan amount includes some unrecoverable principal and interest Loans, this part of assets can be regarded as assets that have been lost and should be deducted from the total assets, similar to the fact that in the financial report of Shuanghui Development, the inventory depreciation losses of the current period (the price of pork fell, the inventory depreciated correspondingly), and the amount of the provision should be deducted from the inventory. The function is to deduct this part of the assets by means of bookkeeping transfer. 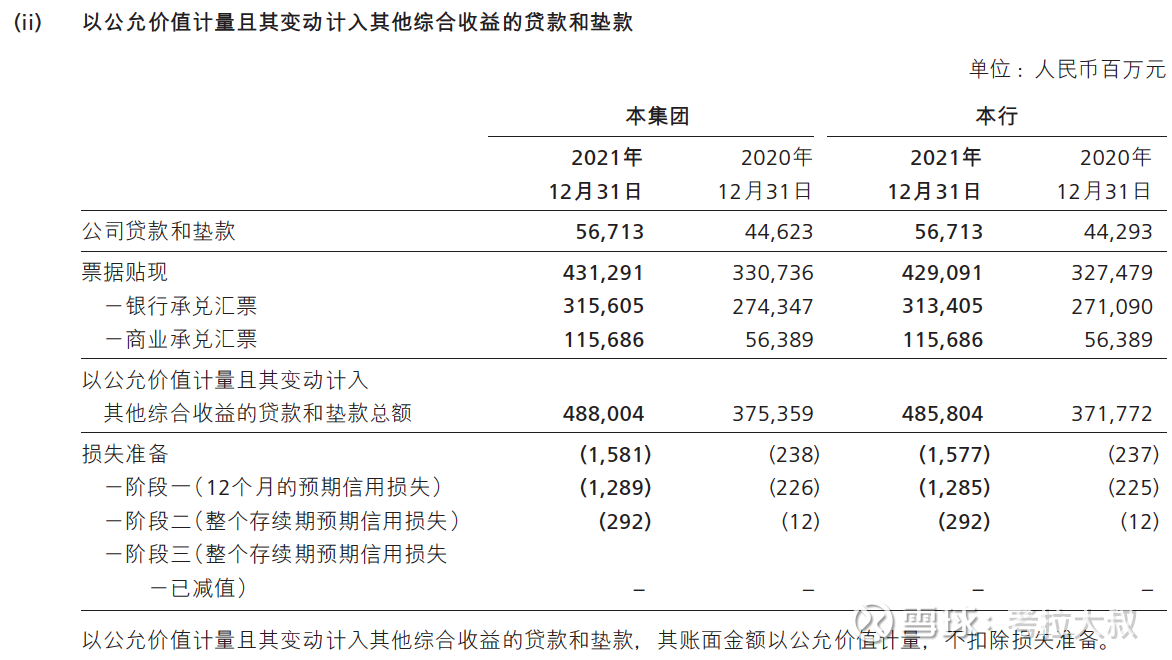 Because it has been clarified in the relevant definition of amortized cost, it is necessary to deduct the impairment loss that has occurred. Amortized cost is similar to the discounted value of an asset at a certain point in time. This discounted value is usually linear, while some assets have fair value at the same time. The two may be inconsistent because assets can be discounted or In a premium transaction, the transaction price will generate a fair value, but the amortized cost can literally be seen to be independent of the transaction price.

The approximate calculation formula (may not be rigorous enough, for reference only):

Therefore, the value of amortized cost is a function of time, for example, the interest receivable will change over time, regardless of the current transaction price.

The simple understanding is that the transaction value is not considered in the way of amortized cost measurement, so it is necessary to estimate the discounted part of the asset when it is realized (for banks, it is non-performing assets, for non-bank enterprises, it is usually inventory depreciation losses) and Deducted; and the transaction value has been considered in the way of fair value measurement (the issue of discount has been reflected in the fair value), so there is no need to reconsider the issue of discount.

To sum up, the bank’s provision does not exist in the form of cash or deposits. It is a part of the assets that is transferred from the assets by bookkeeping every year, and is accumulated year by year, so it is a virtual concept, a virtual Collection of assets. In the income statement (profit and loss statement), it is reflected as the current cost; in the balance sheet, the provision corresponds to those assets whose principal and interest cannot be recovered or those whose principal and interest may not be recovered in the future. These assets are surrounded by an invisible pen got up and was marked as provision.

Therefore, we don’t have to worry about whether the high-provisioned banks are wasting funds. Instead, we should pay attention to the probability of recovering the principal and interest of these problematic assets corresponding to the provisioning in the future. If the provisioning can be recovered, it may generate additional profits. If the provision is not returned, it will disappear as the asset is written off.

However, it must be considered that after the disintegration of Jinben in the 1970s, the bank’s business model has become an infinite game. In theory, the scale of assets can grow infinitely (loans derive deposits to create money M2), which means As a result, we may never see the end result of the provision for problematic assets from the bank statements. The bank’s loan scale will expand indefinitely in a model of borrowing new to repay the old, and the provision scale will also expand infinitely with the expansion of the loan scale.

So, can banks be able to significantly improve their performance by releasing provisions?

[This article is original, your likes, shares and comments are the greatest support for my continuous creation! At the same time, you are also welcome to pay attention to “Uncle Koala Snowballing” and discover my sharing in time! 】

“In what form do bank provisions exist? Where is it? (1) Starting from the provision of Shuanghui Development”

There are 29 discussions on this topic in Snowball, click to view.
Snowball is an investor’s social network, and smart investors are here.
Click to download Snowball mobile client http://xueqiu.com/xz ]]>