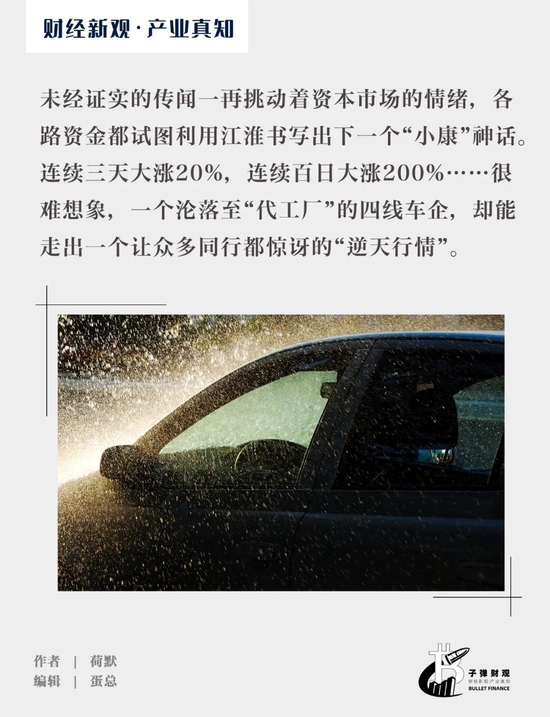 “Building a car” was originally a heavy and frustrating topic, but since the addition of Internet technology companies, it seems to have become unusually magical and fashionable. “Autonomous driving” and “smart cockpit” have been unable to support the car-building story in the capital market, so many car-making players want to send their cars to the sky.

However, recently, there is a car company that is so traditional that it is about to be “eliminated”. Instead of talking about those high-end automotive technologies, let alone sending cars to the sky, they have honestly devoted themselves to the transformation of new energy sources. In the capital market However, it has been praised by various institutions and investors.

It has risen by 20% for three consecutive days, and by 200% for 100 consecutive days… It is hard to imagine that a fourth-tier car company that has been reduced to a “OEM” can get out of a “anti-sky market” that surprised many of its peers.

On August 3, Jianghuai Automobile announced that the company’s stock trading on July 29, August 1 and August 2 in 2022 has increased by more than 20% for three consecutive trading days. According to the regulations of the Shanghai Stock Exchange, it is an abnormal fluctuation situation. In this regard, JAC said after conducting a self-inspection of its own company that the company’s production and operation are normal, and there is no abnormal situation that affects stock price fluctuations. 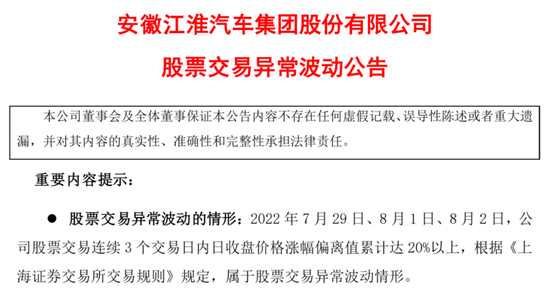 However, on the second day after the announcement of “abnormal stock price fluctuations”, JAC’s stock price not only stopped the sharp rise, but instead fell 4.89%, and once fell to 10% during the session.

The stock price has risen by more than 20% for three consecutive days, which is unusually rare in the 20 years since JAC was listed. But 2022 will not be the first time. Bullets Caiguan found that on May 24 earlier, JAC also issued a warning announcement of “abnormal stock price fluctuations” due to the sharp rise in the stock price.

Looking at the long-term period, this round of JAC’s stock price surge originated at the end of April. The data shows that the price per share of JAC rose from 7.15 yuan on April 26 to 21.74 yuan on August 2. In less than 100 days, the cumulative increase was 204.06%.

The stock price tripled in three months, not to mention the historical trend of JAC, it is extremely rare even in the entire domestic auto industry.

Of course, the biggest driving force behind this round of skyrocketing is the good profit performance of JAC Motors in 2021 on the one hand, and the rumors that it is jointly building cars with Huawei on the other hand.

In addition, in the second quarter, many places across the country launched favorable policies to promote automobile consumption, focusing on “halving the purchase tax” and “cars to the countryside”, and auto stocks ushered in a collective rise. Out of control Mavericks Quotes.

Then on May 23, Huawei announced that the “2022 Huawei Developer Conference” will be held on June 15. On the same day, Hongmeng concept stocks rose collectively, and Jianghuai Automobile suddenly went up to the daily limit. The next day, JAC issued an announcement of “abnormal stock price fluctuations”.

Sure enough, on June 14, the day before the Huawei Developer Conference, some media revealed that “Huawei Smart Selection” had been rolled out on a large scale in the industry. Jianghuai Automobile, Chery Automobile and Jihu Automobile have finalized the smart car business cooperation. Regarding this rumor, the response of JAC related people to the outside world was that “the situation is unclear”, and Huawei chose to avoid talking about it.

Unconfirmed rumors have repeatedly stirred up the sentiment in the capital market, and all kinds of funds are trying to use JAC to write the next “well-off” myth.

In this regard, Bullet Finance published in early July, “Question on the altar, can Xiaokang Co., Ltd. get rid of its dependence on Huawei? “, it was mentioned that Jianghuai, Chery, Changan and other brands have joined hands with Huawei to build cars, thus disrupting the dream of Xiaokang and Huawei to build cars.

Now it seems that in the past month, Xiaokang’s stock price has dropped by 20%, while JAC has risen by nearly 30% in the past July, which shows that investors are extremely sensitive to Huawei’s joint car manufacturing company.

In fact, the rumor that JAC and Huawei are building cars is indeed unconfirmed. If it is attributed to the joint production of cars by Huawei, it will inevitably make people feel a little too one-sided. After all, BAIC, which also cooperates with Huawei to build cars, may not be able to replicate the myth of the soaring stock price of Xiaokang.

From the perspective of Bullet Finance, JAC is highly sought after by the capital market because it has achieved more gratifying achievements in the transformation of the new energy market, and the joint Huawei car manufacturing adds an expectation for the future on this achievement.

Looking at the 2021 annual report of Jianghuai Automobile, Bullet Financial View found that the book value of the construction in progress in the balance sheet was about 974 million yuan, a significant increase of 141.84% year-on-year.

According to the explanation of accounting subjects in the financial report, construction in progress refers to the unfinished project expenditures such as new construction, reconstruction, expansion or technical transformation, equipment renewal and major repair projects of enterprises. For car companies, it is the investment preparation for the production and sales of cars.

Careful excavation found that of the 974 million yuan in the book value of the construction in progress, 466 million yuan was used in the “new energy passenger vehicle body parts construction project”, accounting for nearly half of the total construction in progress, which was the previous year. 31 times over the same period. In addition, a book value of about 325 million is used for the relocation and transformation of the production line of new energy passenger vehicles, and there is no such expenditure in 2020.

From this point of view, Jianghuai Automobile’s construction in 2021 will greatly increase, and nearly 80% of it will be used in the production of new energy passenger vehicles.

For JAC, the net profit attributable to the parent in 2021 is only nearly 200 million yuan, and nearly 1 billion yuan has been spent on the construction of new energy passenger vehicle production lines. At least it can be admitted that JAC’s investment in new energy vehicles is generous. 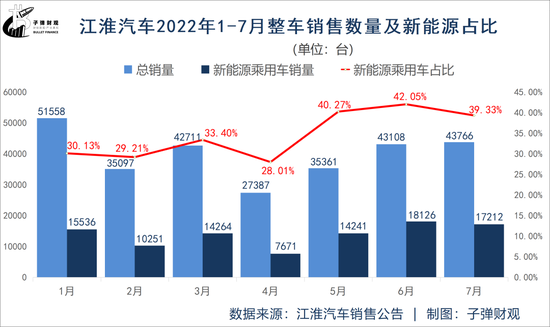 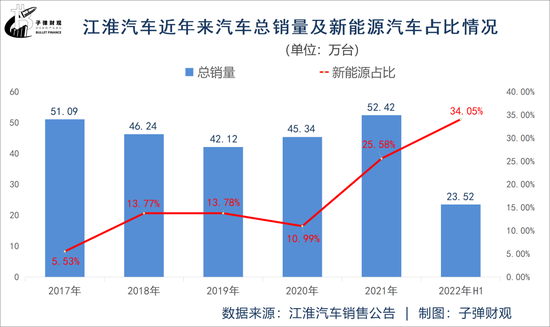 Combined with the new energy transformation and sales performance of JAC, the investment and achievements in new energy vehicles are basically equal.

But unfortunately, the growth of new energy vehicles not only did not drive the increase in total sales, but the “crowding effect” produced is putting pressure on traditional fuel vehicles. That is to say, under the premise that the total sales of automobiles remain unchanged, the more obvious the proportion of sales of new energy vehicles increases, which means that the market for traditional fuel vehicles will be severely compressed.

For Jianghuai Automobile, the cost of acquiring the trust of customers for the same sale of a car is higher than that of traditional fuel vehicles. Because the inherent impression of JAC is “low price” and “practical”, not today’s fashionable and avant-garde new brands.

Survive in the cracks

However, JAC has not been able to rely on the influence of foreign brands to sell high-premium and high-profit models like SAIC, GAC and BAIC. On the contrary, due to the “insufficient” technology and market, JAC has gradually been reduced to occupying the market with automobile brands such as Xiaokang, Wuling, Zotye, and Lifan.

Over the years, JAC has been surviving in the cracks, looking for jobs that other large auto manufacturers are unwilling to do.

In 2016, NIO, a new car-making force, found JAC and wanted to use JAC’s vehicle manufacturing capabilities to help NIO produce new energy vehicles. In April of the same year, JAC and NIO signed a strategic cooperation framework agreement, and NIO will be manufactured by JAC. In June of the following year, JAC and Volkswagen signed a joint venture agreement to jointly produce new energy vehicles. At the end of the year, JAC Volkswagen Co., Ltd. was formally established.

After joining hands with Weilai and Volkswagen, JAC has also successively cooperated with technology giants such as Baidu, Huawei and iFLYTEK to cooperate on autonomous driving, smart cars and digital transformation.

Judging from the profit performance and market share in the past five years, this cooperation has not brought any substantial achievements to JAC. However, the cooperation with Weilai and Volkswagen has shown the outside world the production capacity and determination of JAC.

How much money you make is not very important. To maintain the business of car manufacturing, “survival” is what JAC Motors must insist on, even if it is reduced from a brand manufacturer to a foundry manufacturer.

Looking at the annual report of JAC by Bullet Finance, it is found that other income (government subsidies) of JAC will reach 1.953 billion yuan in 2021. A year-on-year increase of 58.52%. From the data of the past five years, other income has tripled. In the same period, the R&D expenses did not change significantly, but the sales expenses decreased significantly. 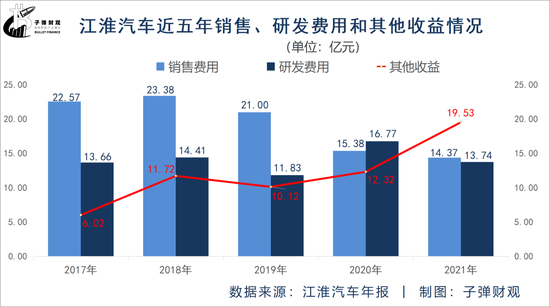 R&D expenses are flat, sales expenses are decreasing, and total car sales have dropped significantly, especially traditional fuel vehicles are severely squeezed… Perhaps this is the most convincing basis for JAC to gradually become a “foundry”.

Although technological innovation cannot be achieved by spending money, it is certain that without incremental funds for R&D investment, it is difficult to achieve breakthroughs in technological achievements.

The steady and flat R&D investment of Jianghuai Automobile can only show that the status quo is maintained. At the same time, the divergence of other income and selling expenses seems to be understood as “just keep production, don’t worry about sales”.

The stock price has risen sharply and sales have been weak. From foundries to new energy sources, JAC has won the “respect” of NIO and Volkswagen. Although the news of jointly building cars with Huawei has not been acknowledged, it is inseparable.

JAC may not be able to replicate the myth of a well-off life, but it “survive” and carry out the car building to the end, even if it becomes the foundry of other car brands, it may be the traditional car manufacturer who is over 500 years old in the new energy car brand. In the current stage of fierce fighting, the most critical survival.

*The title picture in the article comes from: Vision China, based on the RF protocol.

This article is reproduced from: http://finance.sina.com.cn/tech/csj/2022-08-18/doc-imizmscv6792440.shtml
This site is for inclusion only, and the copyright belongs to the original author.